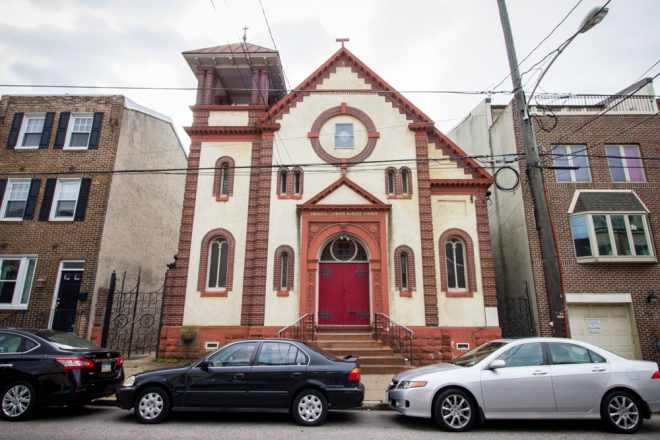 Residents of Bella Vista assembled Tuesday night at the Palumbo Recreation Center at 10th and Bainbridge Streets for the monthly Bella Vista Nighbors Association zoning meeting. The single item on the agenda was the review of a proposal by real estate developer Ori Feibush, owner of OCF Realty, to build seven housing units at 1020-1024 Christian Street on the site of the historic Christian Street Baptist Church, which Feibush purchased for $1.5 million in 2017. Although a demolition permit has been issued for the 128-year-old church, Feibush has previously stated that he is willing to sell the property to a preservation-minded buyer, even at a loss.

Laura Rhame, co-chair of BVNA’s zoning committee introduced the case, noting that one of the main sources of frustration among neighbors is the fact that the developer’s current plan calls for the demolition of a neighborhood landmark. Rhame explained that because the Historical Commission failed to designate the church in November 2017, demolition permits had been legally issued to Feibush. She stressed that this particular issue was a “fait accompli” and would not be addressed at the meeting.

The 19th century church is considered an Italian Market landmark and was almost placed on the Philadelphia Register of Historic Places in November when the Historical Commision voted five to four in favor to designate it historic thereby protecting the church from future demolition. However, just days later, after being clued in to a caveat in the wording of the City’s Historic Preservation Ordinance, Feibush and his legal team rushed to dispute the decision, maintaining that the Commission’s decision to protect the church was incorrect. The developer and his lawyers pointed out that, according to the Commission’s own rules, a majority of the 11 Commissioners present (including the two abstaining from the vote) was needed to comprise a majority vote.

This interpretation of the Commission’s rules, although technically correct, was a confusing departure from the standard Roberts Rules that members of the Commission had assumed they have been operating under for some time. Yet, rather than render the decision void and schedule a revote with all members present, the Commission and the City’s legal department determined that the vote was valid and that the church was not, in fact, designated. Paul Chrystie, communications director for the Department of Planning and Development, explained that, “After reviewing its Rules & Regulations, the Historical Commission corrected its initial misinterpretation of the vote. There was no need for a new vote because the motion, vote, and vote count were valid.” 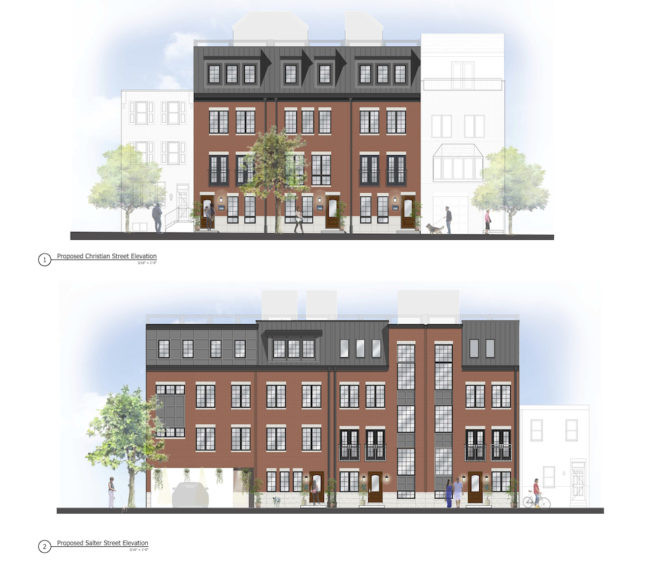 Back at the meeting on Tuesday, Rhame urged neighbors to voice their concerns over the building’s lack of protection to their local representative, saying “The best chance that we now have to save this building is to call Mark Squilla and hope that there can be intervention at some higher level.”

Feibush and two architects from Landmark Architectural Design presented the project and remained at the meeting for the full hour and a half to address community feedback and questions. The majority of the discussion related to concerns about the introduction of traffic along Salter Street, an extremely narrow street behind the church that was formerly a tow path for horses.

The developer’s project proposes replacing the church with two new structures that would contain a total of seven independent dwellings–one building containing three single family units fronting Christian Street, two single family units fronting the slim Salter Street, and a duplex that will sit on top of the parking entrance, also on Salter Street. A central courtyard between the two buildings will accommodate eight parking spots, which will be accessed via Salter Street.

While talking through the proposed renderings, presenting architect Agata Reister mentioned that the private courtyard space between the two new buildings would function as open space for children to play and function “almost like a gated community,” which provoked a strong reaction from the crowd. A resident of Salter Street responded that increased traffic brought on by the parking entrance would ruin the existing community space, noting “Salter and Clifton already serve as a community space and we all—the adults and the kids—are friends because of that community space. What I’d like to see is whatever you build includes that as the community space.” The room responded with applause.

Tiny Salter Street is more like a service alley turned communal backyard for the surrounding neighbors than an actual functioning street given its diminutive size. The backstreet was originally carved out as a tow path for horses.| Photo: Michael Bixler

Speaking for a table full of neighbors immediately surrounding the proposed property, resident Bob Hornsby remarked that “We are prepared as a neighborhood to put in 12-inch round steel columns around our properties on Salter Street so that no cars will be able to get up or down the street.” Feibush responded that he would be open to looking into moving the parking access to Christian Street, which prompted pushback from other neighbors.

The proposed homes would each have three bedrooms and consist of approximately 3,000 square feet. All will have access to roof decks from “pilot houses,” which will extend 10 feet beyond the roofline, which tops out at 38 feet. Feibush estimated that the units will be priced at nearly $900,000.

Despite input from the neighbors that perhaps the units could sell without parking, Feibush was adamant that the inclusion of parking was critical to the economic viability of the project, stating that “The difference in the sale price of these homes with and without parking is so substantive that it would immediately obliterate any opportunity to develop this property.”

Feibush reiterated that he was not in a hurry to begin demolition of the church and had been working with the Preservation Alliance for Greater Philadelphia to find a buyer who would preserve it. As the meeting closed, he provided the room with his personal cell phone number, work number, and email address and shared a business card with a resident who said she might know a prospective buyer.

Upon the final vote, every single community member in attendance opposed Feibush’s development plan as proposed.