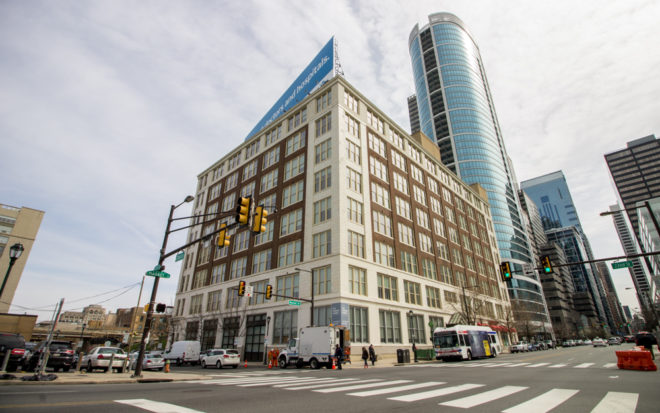 Famous for being Philadelphia’s perpetually crowded Trader Joe’s location, the old Harris Building at 2121 Market Street has been through a lot in its 103-year history.

Real estate speculator Edward M. Harris purchased a vacant industrial space and a row of old houses at the northeast corner of 22nd and Market Streets in January 1914. He intended to build a much larger sequel to his short, but stout Harris Building that once stood on 23rd Street where trains cross the Suburban Bridge over the Schuylkill River to and from 30th Street Station today.

This new Harris Building would dwarf the previous one, but be in the same neighborhood, which, at the time, was a noisy and odorous mishmash of industrial, commercial, utility, and automotive-related uses. The developer commissioned William Steele and Sons for the design, which used their full services as both engineers
and architects.

The design Steele & Sons created was a 121-foot tall, 8-story L-shaped building of reinforced concrete. The facade was red brick surrounded by white terra cotta details along the top, bottom, and corners. The building was capped with a heavily embellished cornice.

For the interior, the 2nd through 8th floors were given 14’8″ ceiling heights and the 1st floor 18 feet of headroom. Steele’s signature, funnel-shaped columns gave each floor a light and airy appearance. Like most Steele & Sons buildings, a goal of the design was to make it fire and vermin-proof. When first built, a brick wall separated the two sides of the L-shaped building. 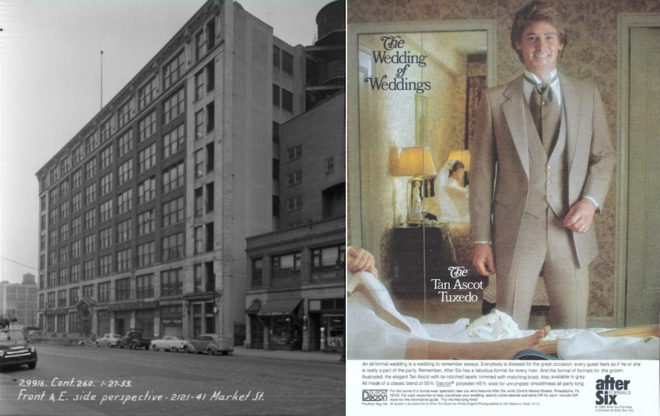 Left: Front east side of 2121 Market Street in 1953. Image courtesy of PhillyHistory.org | Right: Advertisement from 1980 for After Six Formal Wear

Once completed in 1915, the basement was immediately leased to the Twenty-second Street Parcel Post Station, a pre-cursor to the Philadelphia General Post Office at 30th and Market Streets that is now occupied by the IRS. The station was the first in the city to be exclusively dedicated to Fourth Class Mail and any package between four and 11 pounds.

The upper floors were leased to Laird, Schober & Company, a family-owned shoe manufacturer. The company purchased the building in 1921 and named it after themselves. The firm, which employed 950 workers, primarily produced women’s and children’s shoes clad in calf, kid (goat), and alligator skin.

At the height of the company’s production, it produced 2,500 shoes per day. Despite that success, a series of bad circumstances hit the company all in a row. In the 1930s, the Great Depression limited production due to shortages of materials and labor. In the late 1930s, the company had two unions fighting to represent its workers. By the start of the 1940s, rationing for the war effort further damaged the company. Laird, Schober & Company moved out in 1942, but recovered substantially before finally folding in 1965.

In the next following decades, numerous printing, clothing, and manufacturing firms occupied the upper floors while the 1st floor gave way to retail. The Raymond Rosen & Co. appliance showroom held the space until 1953. Newspaper ads for leasing of the 1st floor space can be found for seven years thereafter, indicating that no occupant would come to use it in that time.

In the late 1970s and early 1980s, the Harris Building became the factory and headquarters of tuxedo and suit makers After Six Formal Wear.

After the suit maker moved out in 1985 the building was acquired by the Philadelphia Industrial Development Corporation, who flipped the property to Los Angeles-based real estate firm Maguire Thomas Partners in 1986. That firm was developing the Commerce Square towers one block east at the time and it is reasonable to assume that they acquired the old Harris Building in anticipation of expansion of the late 1980s skyscraper building boom in Center City.

By the start of the 21st century, the once-glorious building was still vacant and in terrible shape. Most of the windows were enclosed, the entire ground floor facade had been removed and made windowless, the ornate cornice was chopped off, and the remaining white terra cotta was very dirty. In 2001, Thomas Properties, the successor to Maguire Thomas Partners, teamed up with local developer PMC Property Group for a residential conversion of the building and a semi-restoration of its lost facade ornamentation using historic preservation tax credits.

Today, the building, now simply known as its address, 2121 Market, is well known for its bottle neck of cars waiting to enter the diminutive parking lot of the city’s only Trader Joe’s.