Temple University’s plans to build a 35,000-seat football stadium in the heart of North Philadelphia has received a tremendous amount of pushback from the surrounding community in the last few weeks. The property, once the site of Monument Cemetery, is located between North Broad and 15th Streets at approximately where Berks Street used to pass through. The plan has riled local residents, who worry that the stadium will inundate the area with noise, congestion, and create an even greater swell of redevelopment pressure in the neighborhood. The heated clash brings to mind the origins of the Bio Pond at the University of Pennsylvania and the fight in the 1990s to save the ecology of the public green from new campus construction. Unlike the situation at Temple, the protests at Penn largely came from students, faculty, and staff from within the university.

Today, the Bio Pond is the centerpiece of James G. Kaskey Memorial Park, completed in the early 2000s with funds donated by Richard and Jeanne Kaskey. The little oasis occupies high ground east of University Avenue. It is immediately south of the celebrated Richards Medical Research Laboratories designed by Louis Kahn and other buildings related to Penn’s Department of Biology. A diverse range of plants and wildlife call Kaskey Park home. Turtles, crayfish, colorful Koi, and resident ducks fill the Bio Pond with ecological activity. The park is also a stopover for migrating birds.

Penn students, faculty, and staff often spend quiet time at lunch and after classes in the peaceful space, which is crisscrossed with numerous trails. The Kaskey Botanical Garden continues the line of beautiful natural spaces on the west bank of the lower Schuylkill River that include Bartrams Gardens and The Woodlands. The Bio Pond even contains water walls and a lovely little waterfall. 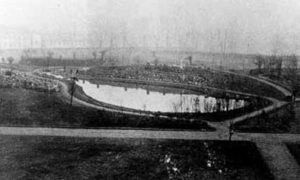 The Bio Pond during its initial construction phase in the 1880s. | Image courtesy of the University of Pennsylvania’s Department of Biology

The recorded history of this property goes back to the early 1800s when the land between 34th Street and University Avenue was known as Blockley Farm. In 1829, the City of Philadelphia purchased 187 acres of The Woodlands from the Hamilton family estate (at $275 per acre) for a new asylum to care for the city’s poor and needy. An almshouse had operated for 60 years on the block surrounded by 10th, 11th, Spruce, and Pine Streets, but it had become dangerously overcrowded and the Blockley Township site was both conveniently nearby and much more spacious.

The City spent nearly $1 million erecting four large buildings with a total capacity of 4,000 residents on a small part of the tract immediately south of where the Bio Pond came to be. In 1834, all housing and health care operations moved to the new Philadelphia Almshouse and Hospital, which was commonly called “Blockley Almshouse” or “Old Blockley” well into the 20th century. The complex of buildings became known as Philadelphia General Hospital in 1919, some years after the hospital was separated from the almshouse. A new set of modern hospital structures were later constructed to replace the original ones. After years of decline, the place was closed in 1977.

The University of Pennsylvania acquired the ground that is now the location of the Bio Pond Garden in the 1870s when Penn moved from its old campus–centered at 9th and Market Streets–to West Philadelphia. The City had to sell unused portions of its 187-acre almshouse grounds to fund construction of additional housing and health care facilities for the sick and poor. Philadelphia did well for itself financially, as it received $8,000 per acre for the 10 acres it sold to the university. 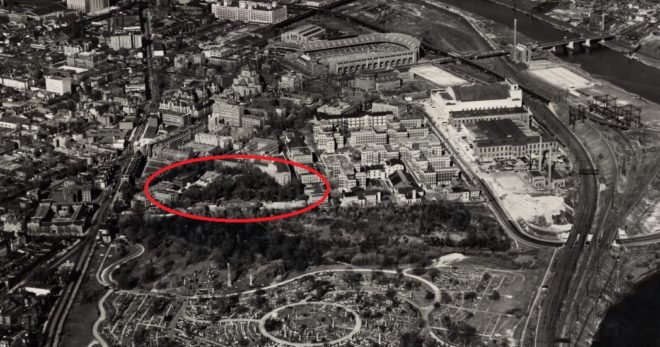 The Bio Pond Garden is circled in red. The complex of building to the right of the circle is that of Philadelphia General Hospital. This image predates the Schuylkill Expressway’s construction in the 1950s. | Image courtesy of the Department of Biology, University of Pennsylvania

Penn’s botanical garden,the school’s original garden, was designed by some of the best botanists in the country in 1880, but it was not planted until 1897. The garden was established to complement and augment the education near the site. Eight greenhouses, now long removed, were built and provided students and faculty with access to over 2,000 species of cacti, ferns, palms, orchids, and carnivorous plants.

Today, Penn’s botany and life sciences students actively use the garden and pond in their studies as do art students. The garden’s effect is quite surreal, as it is practically in the center of a university campus virtually in the middle of a major city. There, you feel as if you are in a rainforest, not in lower University City, the presence of which is reduced to barely audible car horns that hardly compete with the chorus of birds in the garden trees.

In 1902, poet Ezra Pound was thrown into the pond by his fellow Penn classmates while a sophomore. According to different accounts, he was caught wearing bright red socks which were prohibited by Penn’s upperclassmen. Another rumor alleges that he had unwittingly joined a ritual march to the pond that was restricted only to juniors and seniors. The Bio Pond was called the Lily Pond back then, so Pound acquired the nickname “Lily Pound.”

Left: Walking through the Bio Pond Garden in the 1950s. Right: View of Richards Medical Research Laboratories from the garden circa 1965. | Image courtesy of the Department of Biology, University of Pennsylvania

Aside from being the oldest green space on Penn’s campus, the Bio Pond Garden became sacred ground to the university community by the late 20th century. When the school announced plans to construct a new life sciences facility at 38th Street and University Avenue in 2000, many thought that the site was doomed. The new building, pretty much adjacent to the garden and pond, would form the front of a “life sciences quadrangle” that was to include the veterinary and medical schools. At least a portion of the Bio Pond Garden was deemed threatened. Penn’s own Environmental Club raised concerns about possible ecological problems that disturbing the site during construction would produce. Officials at Penn insisted that the disruption would be repairable and only temporary.

Members of the community, like those around Temple University, saw the construction plan as another example of the university disregarding the wished and well being of surrounding neighborhood.

Soon, “Save the Bio Pond Garden” flyers began to sprout up around campus. The University City Review began publishing the letters of concerned parties and offered news, history, pictures, and comments in a section of the website called The Bio Pond Pages. There and elsewhere, the public pointed out that the garden had originally been much larger (five acres), but construction projects over the years had decreased its size to two acres.

In the following two years, during which time the pond was drained, petitions were circulated and protest marches were held. On August 4, 2002, members of the Spiral Q Puppet Theater put on a lunchtime puppet show at the Bio Pond and combined it with a protest. I personally participated in a protest rally and joined a chorus chanted “Save the Bio Pond!” Large demonstration signs were made to draw attention to the march, and I wound up holding one up as we paraded. The protest zigzaged its way through Penn’s campus to the pond itself, where several rousing speeches were made on behalf of preserving the beloved garden and pond. The park was particularly lush that day. 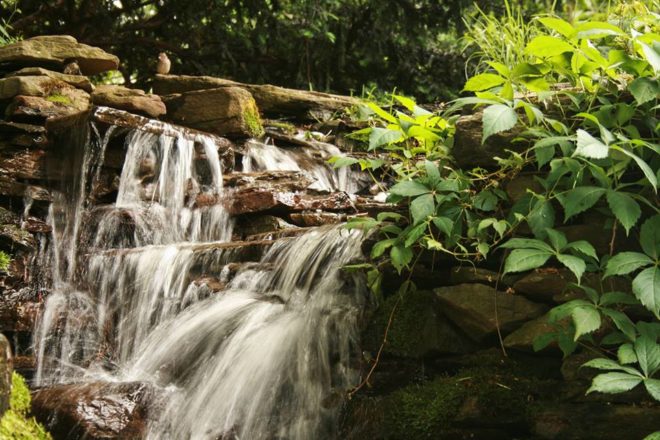 The peaceful sounds of the waterfall at the Bio Pond help block out the cacophony of city life surrounding Penn’s campus in West Philadelphia. | Image courtesy of James G. Kaskey Memorial Park – The BioPond Facebook page.

The protest seems to have been successful, although it may not have been entirely necessary. David Balamuth, Associate Dean of Penn’s School of Arts and Sciences, declared in a university publication that there was nothing really to worry about.

In his statement Balamuth suggested that the pond’s draining was misinterpreted as the beginning of construction on the site. The pond had silted in over the years and had started to overflow its banks. With the Kaskey donation, the pond was dredged, relined, and its edges were redefined. A waterfall and weeping water walls were added to provide aquatic sounds and drinking spots for birds. The Kaskey family subsequently endowed the Bio Pond Garden, insuring that the place will continue to receive care into the future.

The four-story Carolyn Hoff Lynch Biology Laboratory was ultimately completed in 2005, housing wet laboratories for biology and genomics research, plant growth chambers and greenhouses, conference rooms, and Penn’s Genomics Institute. Some garden space and a number of trees were lost because of construction. But the Bio Pond still remains within the Kaskey Memorial Garden. The pond was also formally named in honor of Mrs. Lynch, a former Penn trustee.

Even if the Bio Pond Garden is smaller than its original design, it is still used and loved by the university and surrounding community. The Bio Pond is open seven days a week from sunrise to sunset and it even has its own Facebook page.