The Artful Evolution Of Standard Hall 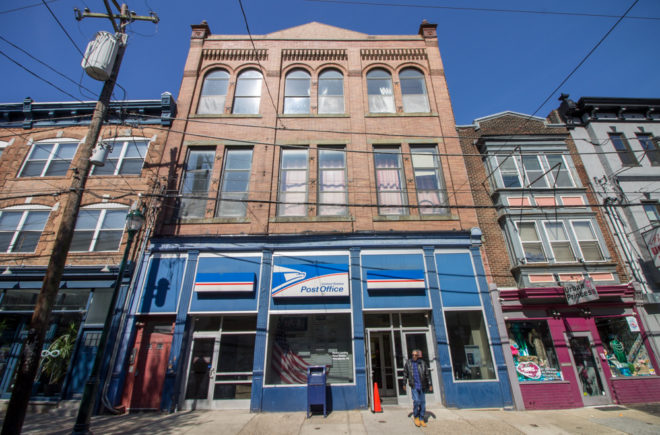 This barely-noticed building on South 4th Street has stayed in continuous use for 121 years as a reflection of its neighborhood’s trends.

In 1894, Maria Dintenfass, wife of businessman Jacob Dintenfass, was willed a 40′ x 82′ plot of land on the 600 block of Bainbridge Street that stretched back to Charles (now Leithgow) Street. By 1897, Jacob and entrepreneur/family member Samuel Dintenfass acquired partial ownership and sought to develop a combination market house, meeting hall, and apartment on the space.

Once built, the new building came to be known as Standard Hall. The building offered a cleaner and weatherproof alternative to the infamous open air Bainbridge Street Market (aka Washington Market) along what is now called “Bainbridge Green” between 3rd and 5th Streets. The hall on the second floor was used for meetings and events. The venture proved successful and the Dintenfass’s flipped the building in 1907 for $38,000. 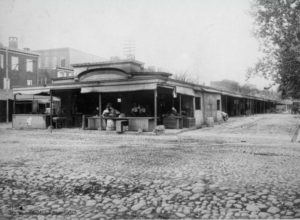 In 1916, when the Bainbridge Street Market closed, Standard Hall became its official alternative and it simply became known as the “Public Market” on 4th Street. However, this use only lasted for a few years until grocer Abe Cooper purchased the property in 1919 and moved his grocery company to all three floors.

Cooper’s priorities must have changed over the next decade because in the 1930s the upper floors were used for warehousing. Cooper commissioned architect T.J. Davis to design a new first floor for the building that added two retail spaces with shop window storefronts with their own addresses–622 and 624 South 4th Street. The retail spaces held a series of shoe and dress stores. The Polsky Family purchased the building in 1948, who would keep the property until the end of the 1990s.

From the 1950s through the 1970s there was a shoe store on one side and a fruit store on the other. The entire building came under threat of demolition due to plans for the Crosstown Expressway, an aggressive urban renewal plan that was never carried out.

Playwright, producer, and director Albert Benzwie next leased both retail spaces on the first floor, combined them, and opened Theater Center Philadelphia. This was an open door theater that was open to anyone producing a play with nowhere to perform. The space went on to host all kinds of different shows and performances and is said to have been the career starter of a few playwrights who moved on to much bigger things. Benzwie would often offer his advice to young writers and producers and sometimes get involved with production. The theater closed after Benzwie died in 1994.

In 1984, the second floor of the old Standard Hall was leased by Group Motion Workshop, a multimedia dance company that arrived in Philadelphia from Berlin in 1968. The contemporary modern dance group remained in the building into the late 1990s, while touring around the world. Group Motion moved out in 2000 and is now headquartered at the old Friends Meeting House at 3500 Lancaster Avenue.

In 1988, a group of Philadelphia artists frustrated with the city’s lack of opportunities held an open meeting at the Group Motion workshop space. Today’s Philadelphia is has saturated in the arts in almost every part of the city, but a few decades ago there were very few venues for young artists show their work. The result of the meeting was the creation of the Vox Populi artist collective, which is still going strong today at the old Albert Loucheim & Company building at 11th and Wood Streets.

In 1999, the building was sold to its current owner, local entrepreneur Ori Cohen. By this point the building was back to having two storefronts on the first floor. One was a record and clothing store called Pedro Gunn while the other lead to a basement dance club called Showplace. The 2nd and 3rd floors were a daycare center. In 2001, Cohen leased the first floor to the Penn’s Landing Post Office and installed apartments on the upper floors.