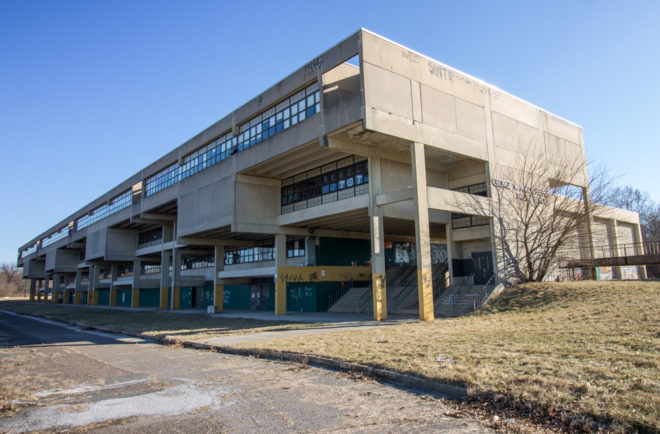 George Pepper Middle School at 2901 S 84th Street is one of Philadelphia’s best examples of Brutalist architecture. The school has sat vacant since it was closed in 2013. | Photo: Michael Bixler

George Pepper Middle School in Eastwick is not a building on most people’s radar. The Brutalist pile of rigid, concrete geometry is set back a ways from the road and almost sinks into the periphery as one travels down 84th Street towards John Heinz National Wildlife Refuge. It is a disorienting feat for such a big, commanding structure. To truly appreciate the school’s powerful presence you have to walk onto the campus and see the place up close. What is striking today is how muscular and even dignified the building still looks after a steady barrage of vandalism and five years of vacancy.

The school was designed by architecture firms Caudill Rowlett Scott and Bower & Fradley in 1969. After the original plan was panned by the Art Commission for lacking “the humanity element” and being “entirely too concentrated,” construction was stalled for two years. Another row with the Art Commission in 1973 delayed the project even further and the school didn’t officially open until 1976.

The School District of Philadelphia closed Pepper in 2013 following the vote to shutter 23 other public schools across the city. The building and surrounding property has since become a persistent public nuisance. Windows have been smashed, frayed wiring dangles like exposed arteries, crude graffiti mocks the breezeways and facade. And then there’s the trash. Old mattresses, piles of clothes, boxes upon boxes of adult diapers, and pornographic DVD cases cover the school’s grounds. This past January the Streets Department removed over 26 tons of garbage and 65.32 tons of used tires (approximately 5,000 tires in all) from the property. To make matters worse, the entirety of the Pepper parcel is listed as a FEMA Special Flood Hazard area. The building is also contaminated with asbestos and mold. Without a plan for reuse in the near future the abandoned school is doomed.

In 2015, Eastwick Friends & Neighbors Coalition invited proposals from prospective buyers looking to revive the school. Interested parties included Envista Farms, the Henderson Group, the Philadelphia International Airport, and the First Baptist Church of Paschall. Two-thirds of the panel voted in favor of selling Pepper and the old Communications Technology High School next door to the church. The School District lowered the price to a little over $2 million and church officials signed a letter of intent. But the agreement was non-binding. To the surprise of the church, the School Reform Commission passed a resolution in November 2017 to cancel the deal and temporarily pull Pepper from the market. According to a representative with the School District of Philadelphia, the property is currently being held pending the completion of the Eastwick Public Lands Strategy. The Philadelphia Redevelopment Authority, the Eastwick Friends & Neighbors Coalition, and Councilman Kenyatta Johnson are putting the final touches on a comprehensive plan for the neighborhood’s vacant land that updates the 50-year-old Master Urban Renewal Agreement that was terminated in 2015.

“Obviously, Pepper Middle School does not serve the best interest of the community as a vacant building,” said Ramona Rousseau-Reid, Interim President of EFNC. “As an eyesore, it serves no meaningful purpose, its deteriorated exterior diminishes the aesthetic beauty of Eastwick, its vacancy is a symbol of municipal disinvestment, and it is a constant reminder of how vacant buildings impact the property values in the neighborhood. This is why residents and stakeholders want to participate in the decision making process for what occurs in Eastwick.” Rather than considering future proposals for Pepper and other vacant properties on a case-by-case basis, Rousseau-Reid said EFNC decided to include significant vacant properties within the context of the entire neighborhood and its vacant land issues.

Until the Eastwick plan is complete, the sale of Pepper remains on hold. The Streets Department continues to patrol the surrounding property for illegal dumping and Philadelphia Parks and Recreation keeps an eye on the athletic field. As for the school itself, its only defense against further degradation is its indomitable character and colossal concrete bones. 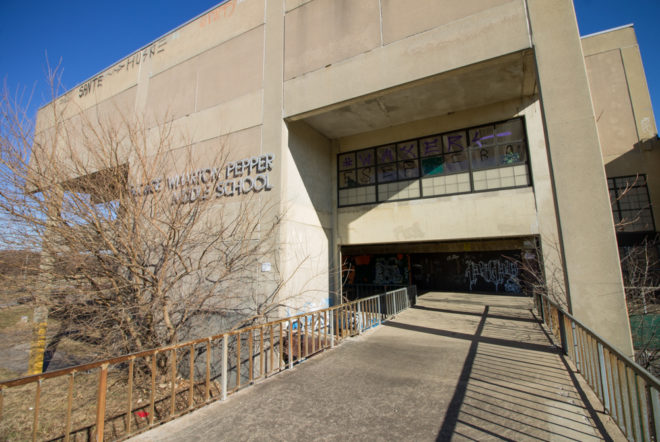 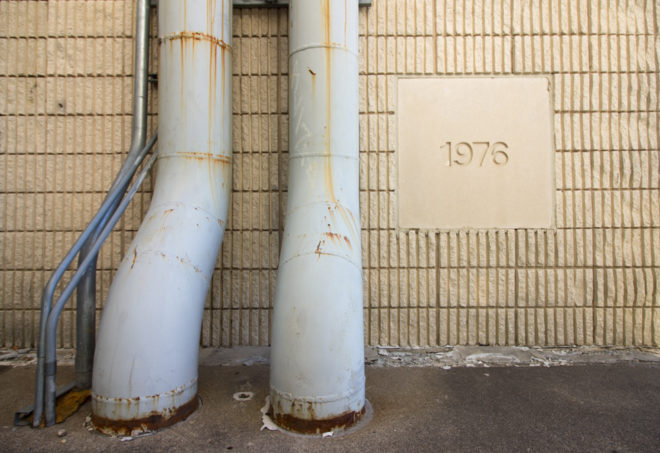 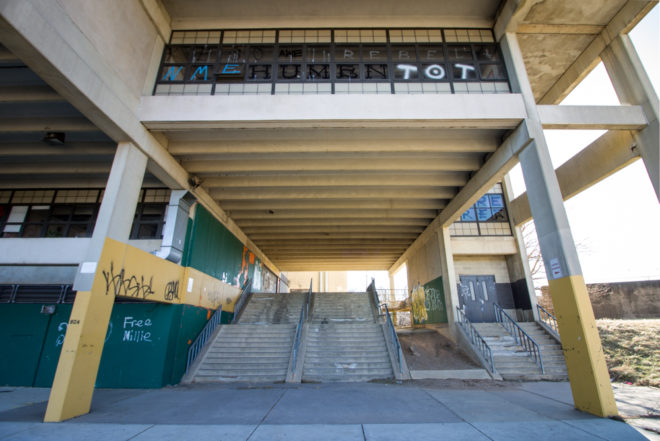 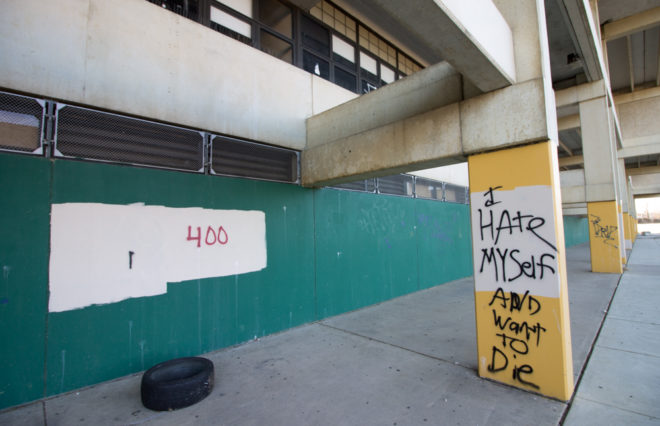 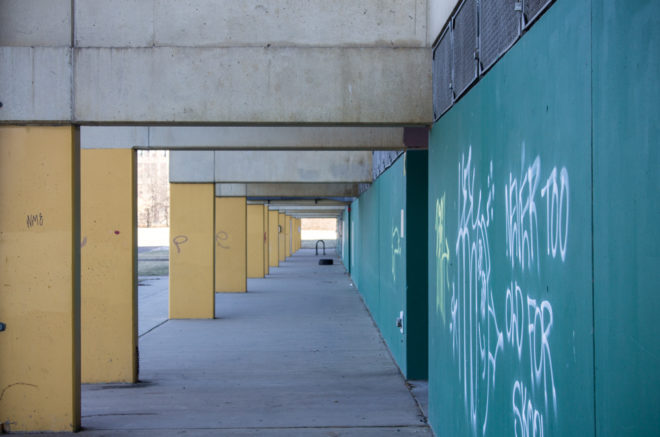 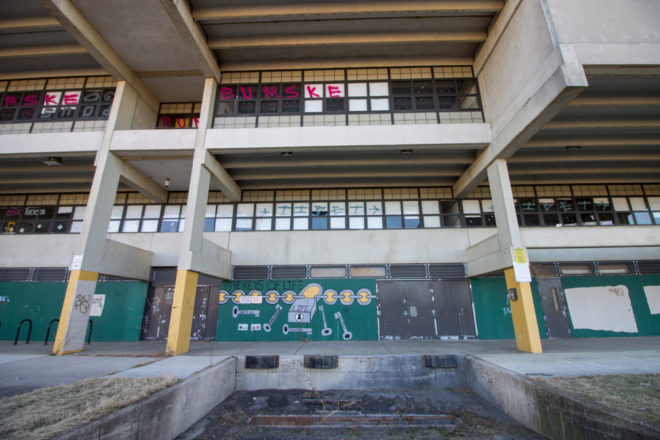 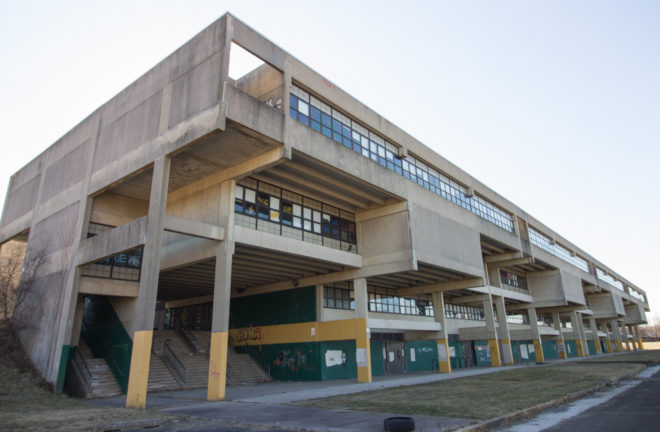 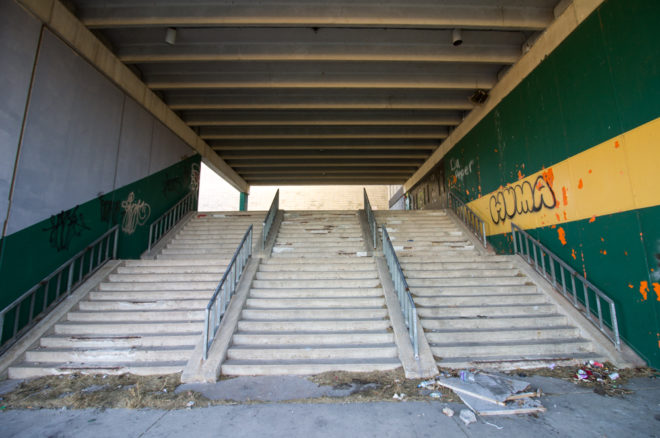 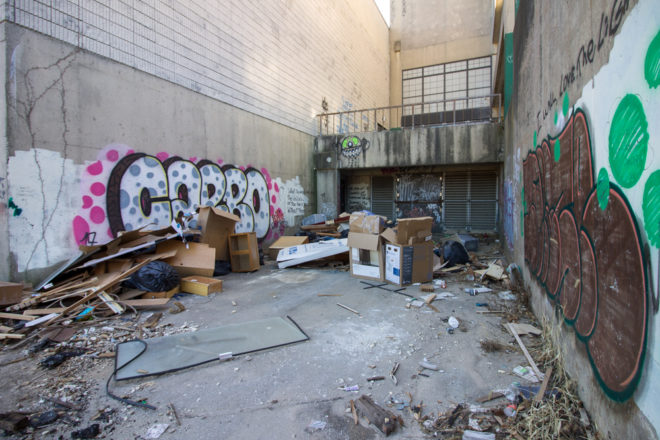 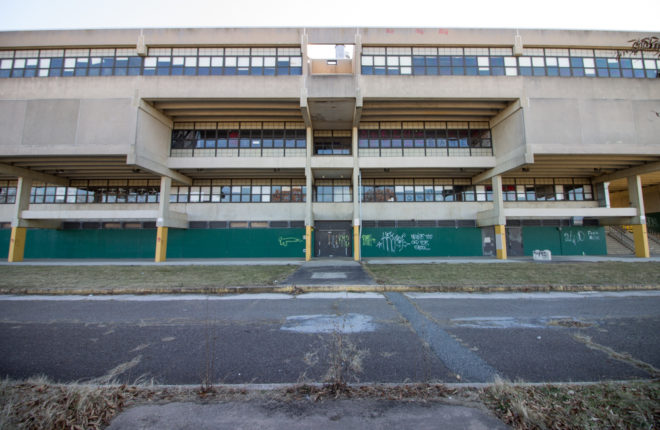 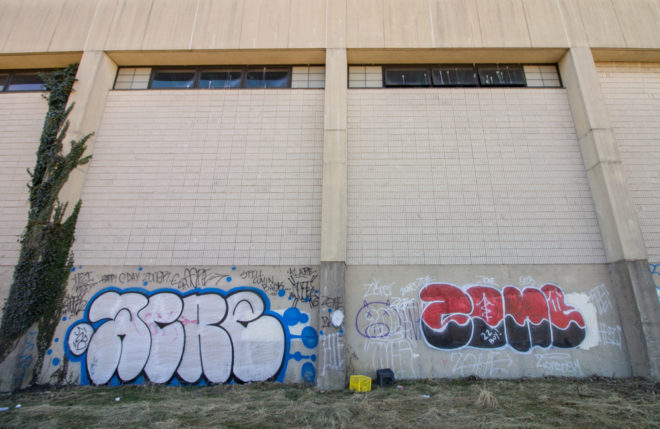 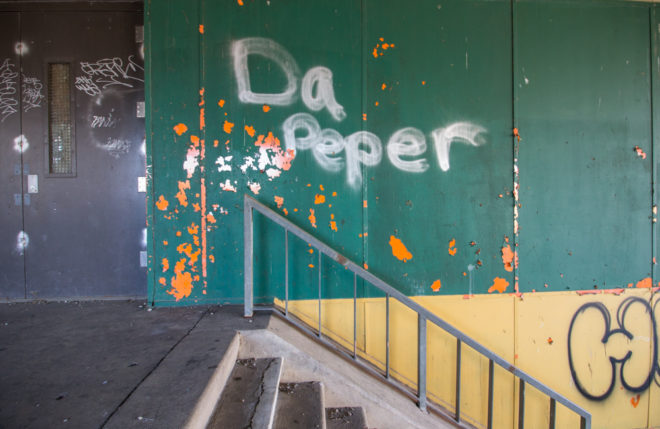