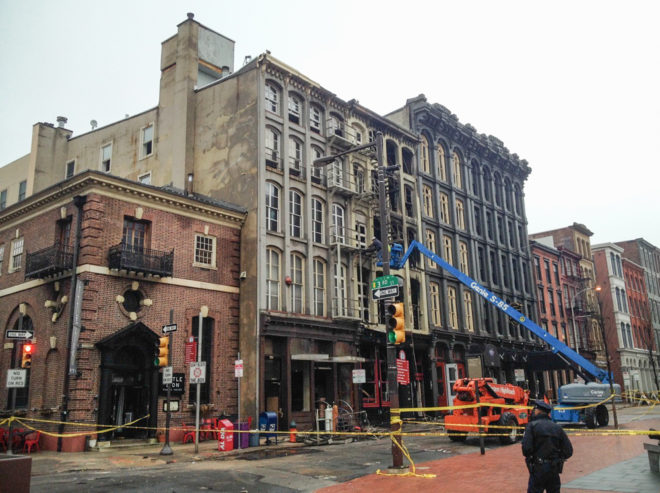 Looking northeast from the corner of Chestnut and Third Streets. 239 Chestnut Street is above and behind the stoplight. | Photo: Tyler Putman

In the early hours of February 18, a fire broke out in a five-story building at 239 Chestnut Street in the heart of Old City. The building, constructed in 1852 and designed by Stephen Decatur Button, is part of a contiguous block of surviving mid-19th century architecture. In the 1860s, dry goods merchant Andrew Wray sold gloves and shirts on the ground floor of 239 Chestnut Street. In the 1880s, the stockbrokers of the Philadelphia Mining Board of Trade did business there. Most recently, people called this building home. The latest accounts of the fire and its damage suggest that, at best, 239 Chestnut Street’s first-floor cast-iron façade may be saved to integrate into a reconstruction. To make matters worse, the cause of the fire is now under federal investigation for possible arson.

But this is not the first time the 200 block of Chestnut Street has suffered a fire or lost an architectural landmark. Across the street from Button’s buildings on the south side of Chestnut Street, where the new Museum of the American Revolution is today, once stood an even more prominent structure. The Jayne Building was an eight-story, 113-foot marvel that quite possibly inspired architects of taller Philadelphia skyscrapers in the years that followed. The former headquarters of the booming patent medicine business of Dr. David Jayne was designed by Philadelphia-born Thomas Ustick Walter and built between 1849 and 1851. 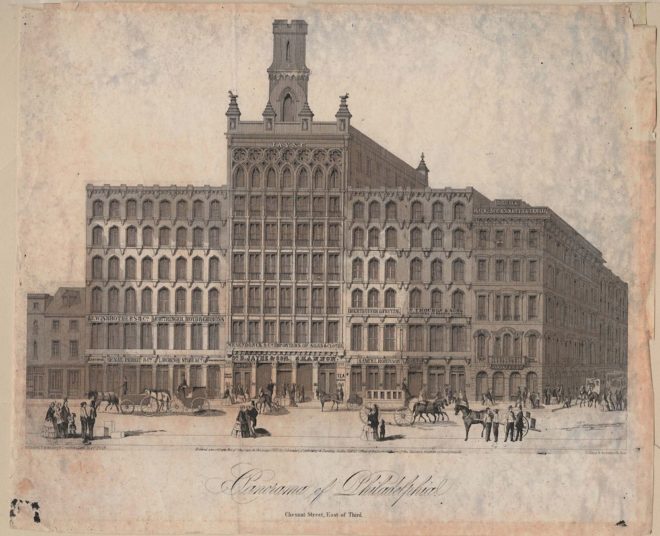 Lithographic view from 1857 showing the 200 block of Chestnut Street. The Jayne Building is in the center. Artists: Collins & Autenrieth | Image courtesy of the Library Company of Philadlephia 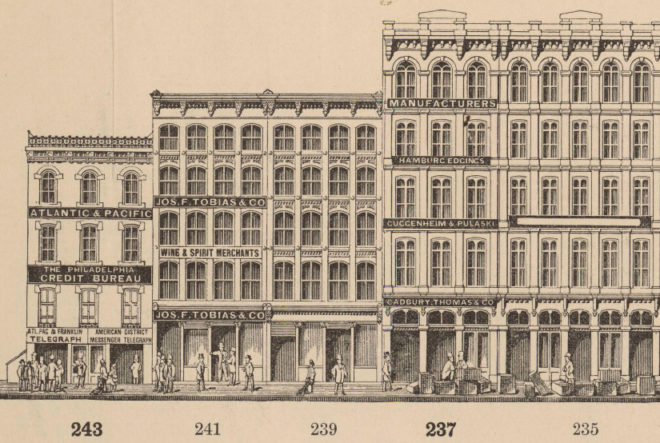 239 Chestnut Street, directly across the street from the Jayne Building, can be seen in the center of this illustration from Baxter’s Panoramic Directory, 1879. | Image courtesy of the Athenaeum of Philadelphia

Button’s buildings stood, metaphorically and literally, in the shadow of the Jayne Building, at least for a while. The Jayne Building caught fire on the cold night of March 4, 1872. A watchman first noticed the fire in the rear of the building’s third story, in the offices of an engraving and printing firm. The blaze spread quickly, and firemen spent the night and most of the next day fighting the flames that largely consumed the structure’s interior.

It was so cold that the water used to douse the fire almost immediately formed a stunning waterfall of ice. “In all portions of the main building great heavy icicles are suspended from cracks in the ceilings and the atmosphere partakes of that of an ice house,” reported the Philadelphia Inquirer. Outside, crowds gathered to gape at the scene. Photographers R. Newell & Co. even published a series of photographs of the icy spectacle.

Stereoscopic of ice scenes after the burning of the Jayne Building on March 5, 1872. Photographed by R. Newell & Co. | Image courtesy of the Library Company of Philadelphia

The Inquirer estimated the losses of the various businesses headquartered in the Jayne Building at over $1 million. But the loss struck a deeper chord. “This building was, by its strength and grandeur of proportions, probably the finest ever erected upon this continent by a single individual, and for more than twenty years, it has stood a monument to the wealth, liberality and enterprise of its founder,” wrote the Inquirer.

Fire would pursue Jayne’s firm in the following months. First, workers managed to contain flames caused by a gas jet igniting chemicals at the firm’s temporary quarters at 622 Chestnut Street later that year in May. Less than a week after the incident, a tremendous fire destroyed another of Jayne’s buildings on Dock Street.

Left: The Jayne Building as it appeared in the spring of 1951. Right: The demolition of the rear of the Jayne Building in October 1957. The second structure from left in the background (with fire escape ladders) is 239 Chestnut Street. | Source: Library of Congress Prints and Photographs Division, HABS

Remarkably, the Jayne Building on Chestnut Street recovered its footing and stood for another 75 years. Gone was its impressive tower, which was made from wood and sheet iron and had burned and collapsed in the fire. But the rest of the building survived.

Survived, that is, until it was acquired to be cleared for Independence National Historical Park. Despite the efforts of historic preservation architect Charles E. Peterson, the Jayne Building was demolished between 1957 and 1958. The land remained vacant until 1975, when the National Park Service built a new visitors center on the site. That building came down in 2014 to make way for the construction of the Museum of the American Revolution. Archaeological excavations ahead of the museum’s construction uncovered, among a stunning array of artifacts and features, the foundation of the Jayne Building.

Meanwhile, Stephen Button’s various buildings across the street remained. 223-237 Chestnut Street, which he also designed, for example, underwent the same cycle of urban decline and revival as much of Old City has experienced in the last 100 years.

Last week’s fire gutted 239 Chestnut Street. The building’s residents all escaped, but they lost their possessions and their pets in the fire. Once a federal investigation into the cause of the fire is complete, most of the building will be demolished and the adjoining structures will be inspected for stability. The owner, stakeholders, and the City will begin to consider the future of the block and the building site.

The losses on Chestnut Street reminds us of just how fragile our built environment actually is. How we put the pieces back together or, when even that is impossible, how we remember what once was, is our cultural responsibility. In 1872, the Philadelphia Inquirer offered this eulogy to the Jayne Building: “The loss of so noble a building is one that the whole city will feel.” Its neighbor at 239 Chestnut Street, perhaps less ostentatious, but no less noble, merits the same mourning. 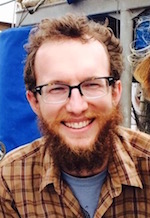 Tyler Putman Tyler Rudd Putman is the Gallery Education Manager at the Museum of the American Revolution and a PhD candidate in the History of American Civilization Program in the Department of History at the University of Delaware.