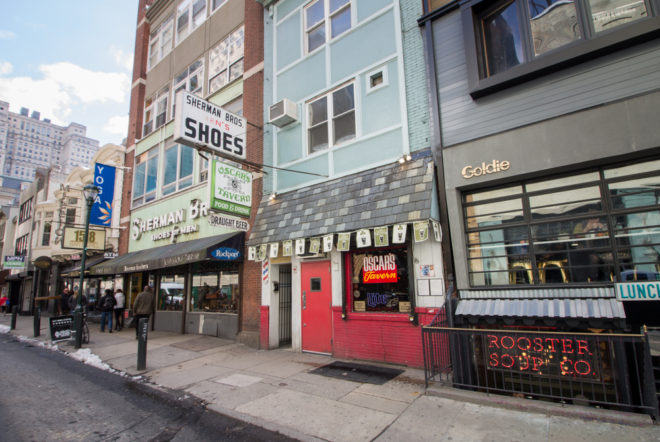 Oscar’s Tavern has been in business on the 1500 block of Sansom Street for over 40 years. This classic Philly bar is a throwback to neighborhood watering holes that once covered nearly every corner of what we now call Center City. Tucked inside an old row house, the history of how the bar came to be illustrates the development of this part of Rittenhouse Square.

The building, or at least the first 30 feet of it, was constructed in the early-to-mid 19th century as a typical 16-foot-wide row house on what used to be called George Street. A long line of occupants and owners made their home at 1524 Sansom Street. Francis Johnson, a costumer who also served as a deputy sheriff, lived there with his family between the 1860s and 1870s. After the Johnsons moved out, the building would no longer see residential use.

In 1881, the old home became the clubhouse of the Philadelphia Medical Club. It is unclear which particular iteration of this social organization of medical professionals this was a part of, but several with this same name have existed over the years. The club was akin to the Union League and the Philadelphia Club, but catered to doctors and surgeons.

At the turn of the 20th century, a small building was constructed on the Moravian Street side of the property and 1524 Sansom Street acquired the new name, “Trades Building.” A few construction companies and plumbers had offices there, most notably prolific construction contractor and former Philadelphia police captain John W. Emery. Emery’s company was involved in the construction of several buildings in Philadelphia and the surrounding region, but also received commissions across the country. The company built a post office in Mobile, Alabama with a facade of Alabama Marble and another post office in Cartersville, Georgia. Despite all the work the Emery’s company was engaged in, he went bankrupt in 1915 and the Trades Building gave itself over to printers and other concerns, including a manufacturer of Skee-Ball games. The storefront became a sales point for the National Typewriter Company.

In the mid-1920s, the old home at 1524 Sansom Street was expanded to connect to its Moravian Street-facing companion and cover its entire property. The newly enlarged building held on to companies that were already there and took on some new tenants as well, including the offices of architect Oliver Randolph Parry. Parry was from an old Quaker family that had been in the region for generations. His great-grandfather Benjamin built the New Hope Flour Mill in 1791 to replace the Hope Flour Mill, giving New Hope, Pennsylvania its name. His grandfather and namesake Oliver Parry developed the large homes in the Spring Garden neighborhood.

Architect Oliver Parry was a well known writer and orator. On top of designing buildings, he wrote articles about architecture and urban planning. He championed re-enforced concrete construction and would design examples displaying its potential beauty. An extant dairy building Parry designed at 26th Street above Jefferson Street still looks interesting, although it is covered in stucco with windows filled with cinder blocks.

As the neighborhood declined around the 1940s, so too did 1524 Sansom Street. In the 1930s and 1940s the building was Conrad Schwarz’ hat store. In 1955, the vacant building was owned by the Flitter family, who leased the property to a precursor to local parking operator Parkway Corp. The Flitters planned to demolish the building and its neighbor at 1526 Sansom Street for a 32-foot-wide parking lot. Gratefully, it never happened.

In 1956, Sam Klyman took possession of the old home. Klyman made alterations to the Sansom Street facade that are still visible today and renovated the first floor into a taproom. Later that year, he opened a bar called Klyman’s Inn there. After another wave of interior alterations in 1972, Oscar’s Tavern opened at 1524 Sansom Street and was destined to call the place home for the next 46 years. “Oscar” is believed to be an Oscar Weiner who ran the bar in 1972, but, by 1974, Harry Chodak both owned the establishment and bought the building for $88,750.

The business has since become a beloved fixture of Philly’s heritage bar scene. Although most businesses on the block have changed with the times, Oscar’s Tavern has kept its heart true to 1972. Known for its cheap eats and tall glasses of lager, the bar lives on as a Center City mainstay and is one of this author’s favorite places to put a few back. The cheese fries come highly recommended, recent health code violations be damned.