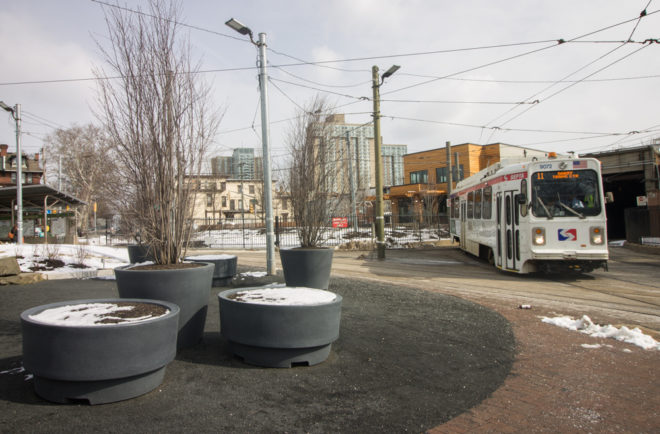 Redesigning the 40th Street Trolley Portal plaza should have been a no brainer. The bleak, if serviceable, stretch of brick and concrete etched by trolley tracks and criss-crossed by overhead wires had long been begging for an intervention. The expanse could, and should, serve as an inspiring gateway to University City. Shaped by a coherent vision, along with some much needed shade and defined paths to guide pedestrians through the barren square, a reconfigured plaza could unify the disparate cityscape around it–connecting Baltimore and Woodland Avenues and engaging the utilitarian SEPTA structures in lively dialogue with the student-occupied brick row houses along Baltimore Avenue, the turrets and mansard roofs of Woodland Terrace, and the monumental stone gates of Woodland Cemetery.

So when University City District announced two years ago a sweeping vision to transform the desert-like plaza into a vibrant public gathering space, expectations ran high. The 40th Street Trolley Portal Gardens, as UCD has rebranded it, would swap concrete and brick for wildflowers and native grasses. The plantings would complement the gardens of flowering shrubs, perennials, and bulbs along the sides of the brick trolley portal and the enclosed eastern end, known as the Portal Point, that public-spirited volunteers from the University City Garden Club planted over the past two decades and will continue to maintain. What was formerly a bleak waystation and passthrough would become, in UCD’s words, “a community asset.”

With The Porch at 30th Street, their seasonal pop-up parklets, and a reimagined intersection at 48th and Baltimore, UCD has proven its ingenuity at infusing life and purpose into overlooked and underutilized spaces, often with just a few bold strokes like whimsical street furniture, a few well-positioned boulders, or planters spilling over with multi-hued tropical plants. 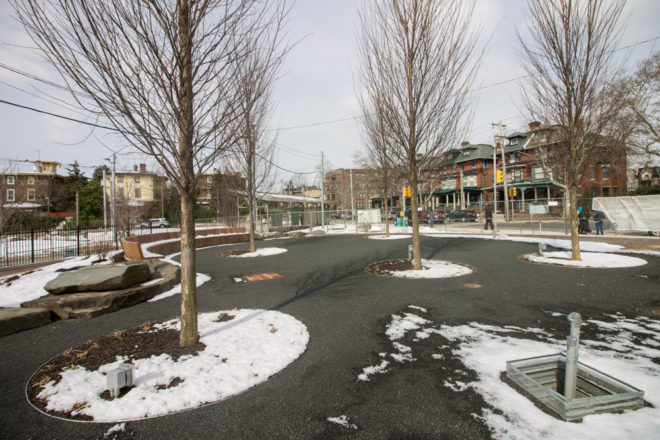 Drab gravel sets a gloomy stage for what should be a lively public green space in the spring and summer. | Photo: Michael Bixler

UCD’s design partners on the 40th Street the project, Andropogon Associates, are known for weaving wildness back into the cityscape. On college campuses and in urban plazas, swaths of meadows not only soften sharp edges and hard surfaces like concrete and steel, they also absorb rainwater and attract birds, butterflies, and other pollinators. Andropogon’s environmentally responsive landscapes evolve into habitats, reminding city dwellers that underneath a city’s veneer of asphalt and cement a forest yearns to break through.

The initial renderings looked spectacular–the gardens in full summer regalia, flowers blooming, trees in full leaf, a restaurant building entwined with vines, windows flung open and banners waving, and the spaces abuzz with people of all ages, bare-legged, lounging on benches or perched on picturesque boulders. The trolleys and the waiting areas took backstage to all this flurry of activity. With such persuasive images and prose, UCD raised $2.1 million to fund the transformation. SEPTA, reportedly, did not have to pay a dime. Among UCD’s promises for the revitalized plaza was a boost in transit ridership.

Now the highly anticipated redesign of the 40th Street Trolley Portal is nearly complete. Although newly planted trees and shrubs are still bare and the wildflowers that will grace the central raised islands sleep under straw, the hardscaping is fixed in place. Pedestrians are already taking advantage of a new brick path, defined by two raised circular flower beds, that flows through the plaza from 40th Street and Baltimore Avenue to Woodland Avenue. Tucked away on the Baltimore Avenue side is a rocky enclave lined with curved wooden benches and a mini plaza that fronts a double decker restaurant. On the Woodland Avenue side, the Philadelphia Water Department is slated to install a demonstration rain garden that will underscore the plaza’s “cutting-edge storm water management techniques.” 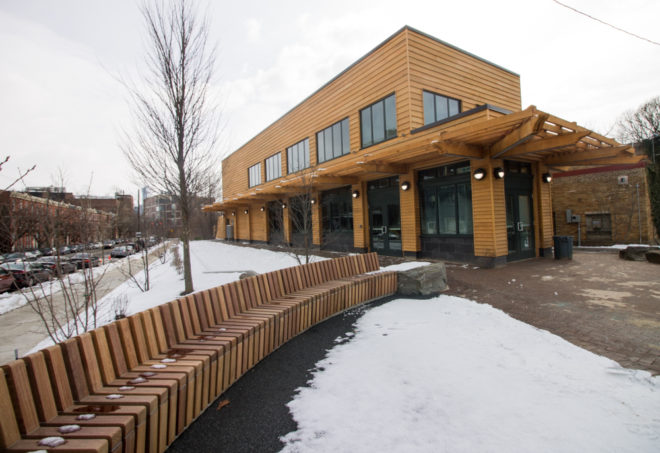 The Portal’s new restaurant looks like a sporting goods store that would be more at home at an outlet mall and interfaces oddly with the surrounding collection of row houses and Victorian homes. | Photo: Michael Bixler

Last week, when my trolley emerged from the tunnel and I glimpsed the completed layout for the first time, my heart sank. Rather than the light, airy vision presented in the renderings, clusters of oversized faux-slate planters dominate the center of new plaza. Deep black, the somber cylinders cast a gloomy air on the surroundings. Pools of black gravel extend from two central ring’s garden beds, presumably a surface for lightweight metal tables and chairs. Boulders, a signature element in many Andropogon designs, are scattered around the edges like an afterthought, a shorthand for wildness borrowed from more cohesive landscapes where massive rocks have an organic presence. Here, paradoxically, they contribute to the self-conscious artifice of the space.

Looming beside the yellow brick trolley portal is the most obtrusive new element of all. The tangy orange redwood double decker structure that will house the Trolley Car Diner restaurant looks either like an ambitious backyard DIY project or a transplant from a suburban California strip mall. Although its jutting eaves allude to the Victorian porches along Baltimore Avenue, the outsize scale and brash color clashes with everything else around it, including Penn’s highrises to the north and the adjoining trolley tunnel which rectangular shape the restaurant building attempts to mimic. Hopefully when the cypress wood fades in a few months it will blend in better with the blooming landscaping. An early rendering for the site, by Andropogon, sketched a much more elegant solution: a shed-like building equal in height to the trolley tunnel with a slanted roof and a wide-mouthed space that echoed the tunnel entrance. The two-story interpretation, designed by architecture firm Group G, will provide restaurant patrons with fine views from the top, no doubt. Frankly, as bland glass highrises proliferate across the city, I’m weary of architecture that privileges the experience of paying insiders over the much larger public who interact with buildings on the ground from the outside. 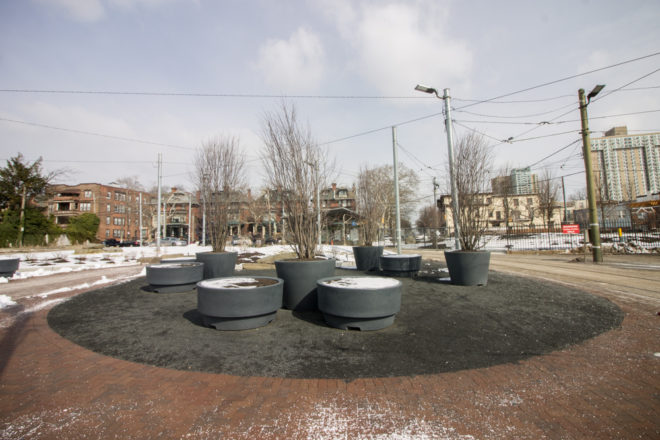 In another, presumed nod to the functional trolley tunnel structure the back of the wooden building features a service entrance with an enormous metal garage door that takes up the entire wall. Like several buildings along the 38th Street corridor, including the Vernon and Shirley Hill Pavilion for Penn’s School of Veterinary Medicine directly to the east, the restaurant building doesn’t consider it will be viewed from more than two directions. Like Hill Pavilion with its west-facing loading docks, the restaurant basically moons anyone passing by along Baltimore Avenue.

West Philadelphia’s motley character is, of course, part of its charm, and perhaps the designers were aiming to capture that in this busy jumble of a garden. But the design resembles more the visual cacophony of the tangled intersections of Baltimore, Woodland, and University Avenues–an unharmonic convergence of confusing traffic patterns and mediocre, multi-colored and textured architecture (with Hill Pavilion the most egregious example) than the charmingly varied pattern of chocolate schist and white stucco surfaces in Woodland Terrace to the west. Lacking referential vision,  designers could have have looked for inspiration to architect Paul Cret, who orchestrated both the charming harmonies of Woodland Terrace and the monumental grandeur of the Woodland Cemetery gates. Instead of establishing a formal unity that would define the space as both gateway and outdoor room (as Studio Brian Hanes did so successfully in their redesign of Clark Park, three blocks west), Andropogon and UCD seem to have casually assembled a kit of parts–planters, rocks, gravel, café chairs–that might as well have come from Home Depot.

The ultimate losers are those who use the station for transportation. The new space, in full summer garb, may be more visually appealing, but it has hidden perils for passengers headed for the Center City-bound trolley. In pitching the project, UCD claimed that the “the site design emphasizes safety and comfort for the estimated 5,000 riders who board or exit trolleys at the Portal each day.” With a clearly marked path, pedestrians would no longer wander aimlessly across the directionless concrete desert after they got off the trolley. Unfortunately, there is only one new path, which curves southwest from 40th Street toward the westbound trolley shelter and vice versa. The walkway doesn’t connect with the eastbound waiting area, so passengers heading into Center City or disembarking from an eastbound trolley are forced to skirt a narrow strip of brick between the curved flower bed and the trolley tracks. Last week, I stood in the plaza center for ten minutes and counted eight people walking on the trolley tracks, the most logical, direct route to their destination. That planners didn’t observe how transit riders moved through the plaza before laying down their single path seems like a fundamental design error. The current design assumes that, counter to human nature, pedestrians will veer out of their way to follow a safer path rather than risk the direct, if more dangerous, route. Another crucial safety opportunity squandered by UCD is traffic calming and a cross walk at the perilous intersection of the portal and Woodland Avenue.

The more things change, the more they stay the same. | Photos: Michael Bixler

Despite such fundamental flaws, the Trolley Portal Gardens will probably be deemed a success. Beautiful plantings can cover a variety of architectural sins. Flowers will bloom and the trees will grow tall (as tall as they can in the confines of those planters), and hanging vines will mute the glaring orange of the Trolley Car Diner. Students and other West Philly residents will hang out on the wooden benches and café tables and chairs, and maybe even mingle with each other. I might well be among them. And although passengers headed for the eastbound train will inevitably wander across the tracks, SEPTA will–one hopes–maintain its miraculous record of no fatalities.

It’s disappointing though. Muddling through inadequate design solutions is something Philadelphians are all too accustomed to. This haphazard design began with such promise. What a wasted opportunity to create a truly impressive, cohesive and inclusive public space. West Philly, SEPTA riders, and those workhorse trolleys deserve better.