In Sharswood, Effort To Save Dox Thrash House Gains Momentum

A group of historic preservation advocates are working to make an example of the Dox Thrash House in Sharswood. Thrash was a prominent African-American artist who lived in Philadelphia from the mid-1920’s until he passed away in 1965. His former residence, located at 2340 Cecil B. More Avenue is listed as a Philadelphia landmark, although it has been sitting vacant since the 1990’s, left vulnerable to the elements.

Unlike most preservation battles, the initial hurdle—getting the building in question listed on the local register of historic places—has already been cleared. The property was nominated by the Preservation Alliance for Greater Philadelphia and listed on the Philadelphia register 2013. Thrash also owned another building at 2409 Cecil B. Moore Avenue, which he used as a studio, but it has since been demolished. 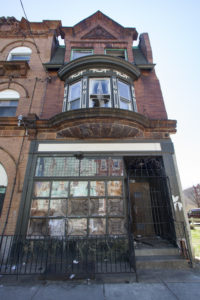 The house African American artist Dox Thrash lived and worked at was built in 1895, a product of the wave of speculative building throughout Philadelphia’s early streetcar suburbs era. The three-story Victorian home is among 11 of the original 22 that remain standing on the block. | Photo: Starr Herr-Cardillo

Dana Rice, Andrea Haley, Maya Thomas, and Chris Mulford comprise The Dox Thrash House, an organization that seeks to preserve the artist’s legacy. The group has been working with Community Futures Lab and other local organizations and stakeholders to identify potential options for repurposing the building. Ideally, the team and the community would like to see the house restored and reused as a community center through a conservatorship, a plan supported by the Preservation Alliance for Greater Philadelphia. In this scenario, some form of collaborative stewardship between local organizations could bring the space back to life as a community resource—a place to teach art, host events, or become a satellite art gallery. Specific circumstances, however, have pushed the team to reckon with alternative outcomes, which don’t all necessarily involve saving the structure itself.

The Sharswood neighborhood, now more commonly identified by overlapping neighborhoods Brewerytown or Strawberry Mansion, developed like most of North Philadelphia as a 19th century streetcar suburb. Around WWII, the demographics began to shift as more African Americans moved north during the Great Migration and the area around Columbia and Ridge Avenues developed as a hub with thriving jazz and arts scenes influenced by the Harlem Renaissance and New Negro movement.

Dox Thrash, born in Griffin Georgia in 1893, was an innovative artist and printmaker. He grew up in a former slave cabin with his parents and three siblings and studied art through mail correspondence. After serving in World War I, he was able to put his Army pension towards full-time tuition at the Art Institute of Chicago. Upon finishing his degree, Thrash traveled for a while and eventually settled in Philadelphia having been drawn in by the energized community of Black artists and intellectuals living and working around Columbia Avenue (since renamed for civil rights activist and lawyer Cecil B. Moore).

Thrash’s body of work included printmaking and graphic design for a number of local businesses and institutions, including the Pyramid Club, a nearby preeminent social club for black professionals and the only African-American owned exhibition space in the city. He also extensively documented daily life in his neighborhood, Philadelphia street scenes, and domestic workers during WWII. During a stint with the Federal Art Project, a New Deal era program that put artists to work, Thrash and fellow artists Hugh Mesibov and Michael Gallagher invented a new printmaking technique called the carborundum mezzotint process which involved abrading a metal plate using carbide silicon (or, carborundum) to create a textured surface which would uniformly hold ink. The plate could then be etched to create the relief portion of an image.

Left: A flier for the Pyramid Club designed by Dox Thrash. Right: Dox Thrash speaks at the Pyramid Club, circa 1940 | Images courtesy of the Philadelphia Museum of Art and the Charles L. Blockson Afro-American Collection, Temple University Libraries

The Philadelphia Museum of Art holds a substantial collection of Thrash’s work, though it is not on permanent display. The museum exhibited a retrospective of his work in 2001 and released an accompanying publication titled, Dox Thrash: An African American Master Printmaker Rediscovered. In 2012, a mural depicting Thrash on the side of an abandoned house at 2442 Cecil B. Moore Avenue, commissioned through Mural Arts in conjunction with the exhibition, was blacked out by HUD workers. Artist Eric Odeh, who designed the original mural, revised the design at 1631 Girard Avenue in 2015. The mural’s new location is a block from the former location of the Pyramid Club. However, it has since been partially obscured by a new construction project.

Part of the challenge with preserving and repurposing the Thrash House is the fact that the legal owner of the property is no longer alive. Muhammad Ali Hasan, an activist and minister of the National Muslim Im­provement Association of Amer­ica, purchased the building from Thrash in 1959. He owned a number of properties within the vicinity, including the house next door, which he ran as a boys’ house. Hasan passed away in the early 1990s without willing his properties to any of his offspring. With multiple children, and therefore multiple potential claims to the title, ownership has never been resolved.

Hasan purchased the home as Sharswood and North Philadelphia became increasingly connected to the civil rights movement and related activism. During the riots that broke out near Columbia Avenue and 22nd street on August 29, 1964, he was arrested on three counts: inciting rioting, participating in a riot, and conspiracy to start a riot. Local NAACP president and attorney Cecil B. Moore served as his defense lawyer. 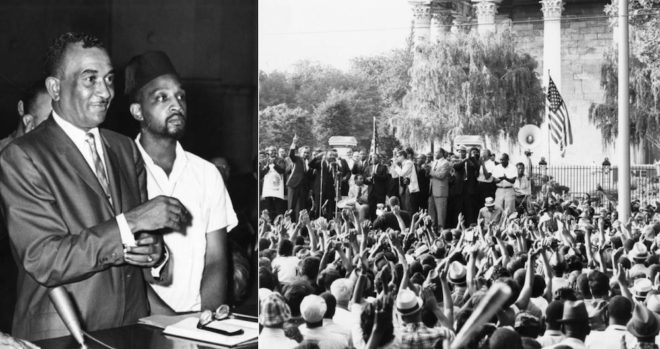 The 1964 riots solidified rhetoric employed by local journalists and the predominately white Philadelphia Police Department that characterized North Philadelphia as dangerous and prone to crime. Meanwhile, government subsidies aided white families relocating from the city to the suburb,s and racist and discriminatory lending practices were devaluing properties and thwarting investment in predominately Black neighborhoods like Sharswood through redlining. This narrative was reinforced by City agencies like the Philadelphia Housing Authority, which had already declared the Sharswood neighborhood “blighted” by 1948.

Fast forward to today when the Philadelphia Housing Authority has essentially initiated a modern day urban renewal project in the neighborhood. The PHA’s plan for the area includes the acquisition of more than 1,300 properties, over 70 of which were occupied and seized by eminent domain. Though numerous murals throughout the neighborhood depict significant people and events related to the impressive legacy of African American history in the area, very few physical landmarks remain.

Transferring title of the Thrash House to a legal descendant would entail a long, and likely expensive, legal process. Additionally, it is encumbered by back taxes and a slew of L&I violations dating back to the early 1990s. As a result, despite its landmark status, the future of the house feels tenuous. A nomination for the National Register of Historic Places has also been prepared, which would enable the use of federal tax credits in the building’s restoration. The process, however, requires consent of the property owner and is stalled until the title has been resolved. 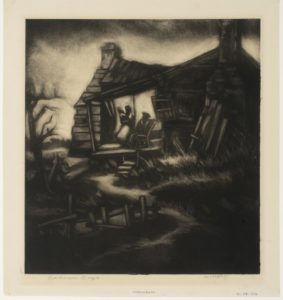 “Cabin Days” by Dox Thrash was made using the carborundum mezzotint process. | Image courtesy of the Philadelphia Museum of Art

“The issues with the building have stymied other efforts in the past to preserve it,” says Dana Rice, who explained that Project HOME attempted a similar plan, but never made it past the feasibility stage because purchasing the property wasn’t an option. “Tangled titles” are an issue in the city. The John Coltrane House in Strawberry Mansion faced the same hurdles.

The group has been in contact with some of Hasan’s descendants who hope to resolve the title issues and are open to the idea of pursuing a conservatorship and the plan to repurpose the house as a community center. The organization had also hoped that the Philadelphia Land Bank might offer a solution to the acquisition of the building, but that option is looking less likely. Given the circumstances, they’re interested in identifying alternative preservation options—ones that don’t include restoring the building itself. “Of course, we’re not losing sight of the building… but there are other options we’ve researched and thought about,” says Andrea Haley. “We actually focused pretty heavily on some scenarios that involve ‘preservation’ without the building.”

It’s a known deficiency in the historic preservation world that the current policy framework places an undue emphasis on architectural merit and “integrity,” defined in this context as a place’s ability to convey its visual significance. It is much more challenging to argue the significance of places which have been heavily altered or have deteriorated over time, creating a classist and racial bias when it comes to which places gain official “historic” status. Maya Thomas is determined for the team’s work to serve as a model for similar scenarios in the future. “My main impetus for working on this is looking at this problem as a research question,” says Thomas, who sees this as an opportunity to come up with a framework for doing things differently. The fact that traditional preservation is predicated on the existence of “original” fabric, Thomas says, disproportionately affects the representation of African American heritage.

Left: The Checker Club is the last standing jazz venue along Ridge Avenue and also depicts a tribute to the Pearl Theater, the premiere venue for black artists and performers in the early 1900s. Right: The Dox Thrash mural at 1631 Girard Avenue, commissioned by Mural Arts in 2015. It has since been obscured by new construction. | Photos: Starr Herr-Cardillo

For more creative and non-traditional solutions, the team has turned to the Sharswood community for input, reaching out to start a conversation about how to keep Thrash’s legacy alive with residents and organizations in the area. Pairing up with Community Futures Lab, the group organized community discussions which they advertised through posters promising “not another community meeting.” The meetings sparked lively discussion about the neighborhood’s history and how to recognize and honor Dox Thrash’s role as both a community member and artist. Both meetings drew crowds of people passionate about the importance of recognizing Thrash’s story and those of similar artists and activists that define the history of the neighborhood. Linking Thrash’s story to the larger network of contemporary black artists, such as the jazz scene, and connecting these histories to artists and organizations working today have been common themes from community input.

The Dox Thrash House group has also identified a number of potential community partners and stewards, including the neighboring Cecil B. Moore Library, North Philly Peace Park, and the Martin Luther King Recreation Center. Although there is certainly a value and need for alternative approaches to preservation that don’t hinge entirely on buildings, having tangible links to the past is powerful and valuable for communities. As the Philadelphia Housing Authority moves forward with plans to literally level and rebuild the neighborhood, preserving the Dox Thrash House as a tangible marker of African American achievement and connection to the past feels more important than ever.