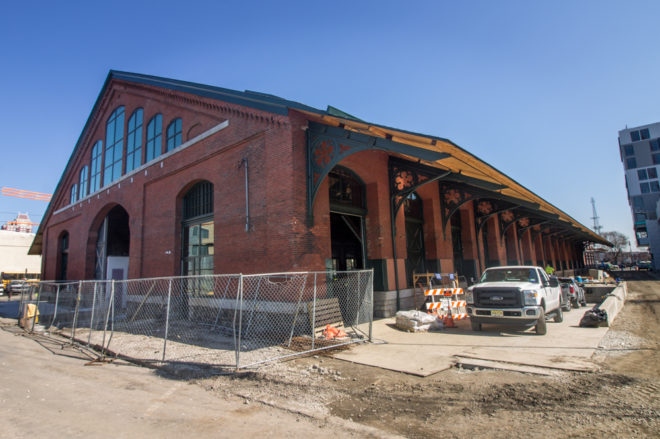 The 142-year-old train shed between Broad and 15th Streets at Washington Avenue is getting a new lease on life. Construction to rehab and conversion of the old Philadelphia, Wilmington, and Baltimore Railroad freight station into an organic grocery store is currently under way. | Photo: Michael Bixler

The northwest corner of Broad Street and Washington Avenue is swarming with controlled chaos. Cranes heave, contractors hustle, and big loader tractors barrel back and fourth down a narrow dirt road hauling piles of walnut-sized gravel. Lincoln Square, the $100 million mixed-use project led by developers Alterra and MIS Capital, is rising fast and its two major construction projects are in a race for completion. Most visible from the street is a new nine-story residential and retail complex designed by BLT Architects. The boxy mid-rise rectangle will feature 322 apartments, 50,000-square-feet of amenity space, and a four-story parking garage. Down below, 100,000-square-feet of retail will activate the long-dead stretch of Washington Avenue with chains like Target and Pet Smart. Next door, a flinty piece of railroad history is being prepared for a new lease on life where freight cars and funeral trains are traded in for checkout counters.

Most locals and long-time transplants know the corner of Broad and Washington as the place where President Abraham Lincoln’s body was held for viewing following his assassination. The Philadelphia, Wilmington & Baltimore Railroad Depot, a passenger station on the same lot as the freight shed currently being renovated, received the Lincoln Special funeral train around 4:30PM on April 22, 1865. His remains were transferred by hearse followed by a procession of mourners to Independence Hall for public viewing the next day. According to newspaper accounts, crowds gathered and a vigil was held throughout the night. In the morning, more than 50,000 people clamored into a line to view Lincoln’s body. Some accounts claimed the mob stretched three miles and the wait to view the body was upwards of five hours long. Philly being Philly, fights broke out and pick pocketing was rampant. Clothing was ripped, people fainted from exhaustion, and a woman’s arm was broken. At the end of the day, police estimated that nearly 300,000 people had showed up to pay their respects. A procession of candles and funeral dirges led Lincoln’s body back to the station at Broad and Washington where the Lincoln Special departed Philadelphia on the morning of April 24 to pass through Trenton and Jersey City en route to a funeral inside the rotunda of New York City Hall. The PW&B Railroad Depot closed for passenger service in January 1882 and was put to freight use. During WWII, the building was demolished by the federal government for the storage of Marine Corps munitions and vehicles awaiting transport.

The Late Gothic Revival freight station that survives today was built next to the old passenger station in the spring of 1876 to accommodate an anticipated increase of traffic generated by the Centennial Exposition later that year. The Pennsylvania Railroad took ownership shortly after Broad Street Station opened in 1881. The train shed was decommissioned by the late 1960s and it was sold for use as a warehouse. Between 1968 and 1969, the freight station’s head house and eight eastern bays were demolished. The train shed was added to the National Register of Historic Places in 2011. It was last used by Asian wholesale grocer A&A International Foods. Alterra and MIS Capital purchased the building and surrounding 3.36-acre vacant lot from the Philadelphia Authority of Industrial Development in 2016.

Today, rehabilitation and additions to the old train shed are well underway. The building’s dazzling Fink Truss system that resembles the arched skeleton of a humpbacked whale, an engineering design typically used in bridge construction, has been preserved. Brick has been repointed, windows have been replaced with the original trim retained, and exterior elements like wooden doors, cast iron eave brackets, and corner guards have been restored and repainted. Within the shed, the reconfiguring into a single floor has eliminated a variety of existing floor levels to accommodate the building’s next tenant, Sprouts Farmers Market, an organic supermarket based in Phoenix, Arizona. In a subtle nod to the shed’s original head house, a new glassy addition and entrance is being built on a plaza fronting Broad Street. A walkway between the shed and the parking garage, dubbed “Lincoln Walk,” will connect 15th and Broad Streets. Landscaping, planters, and benches designed by Cairone & Kaupp, Inc. will shape the plaza and walkway into a public gathering and event space.

The total construction cost for the train shed’s rehabilitation and addition will land roughly at $6.9M. The converted station will yield approximately 32,000 square feet of commercial space. In an ironic twist, bustling Lincoln Square’s staging area takes place in the huge empty lot across the street where developer Bart Blatstein’s lofty plans for a 32-story luxury apartment tower and rooftop shopping mall can’t quite manage to get off the ground.

Shedding light on the progress of the old PW&B freight station at Lincoln Square. Photographs by Michael Bixler. 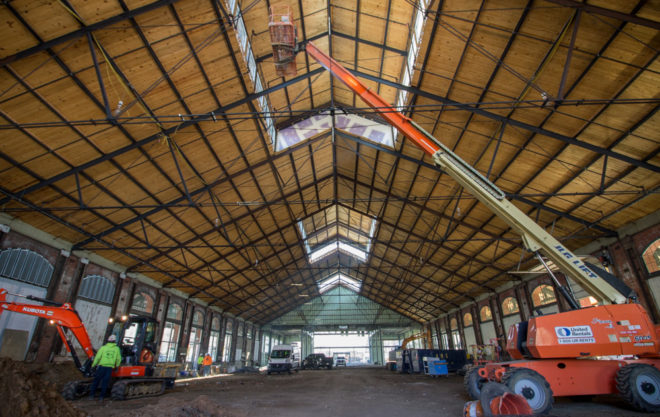 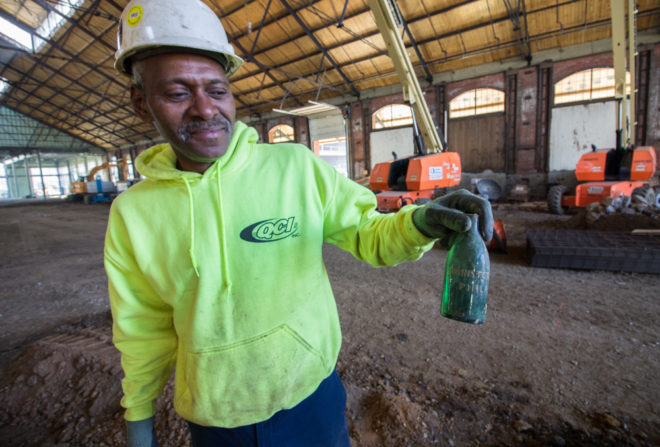 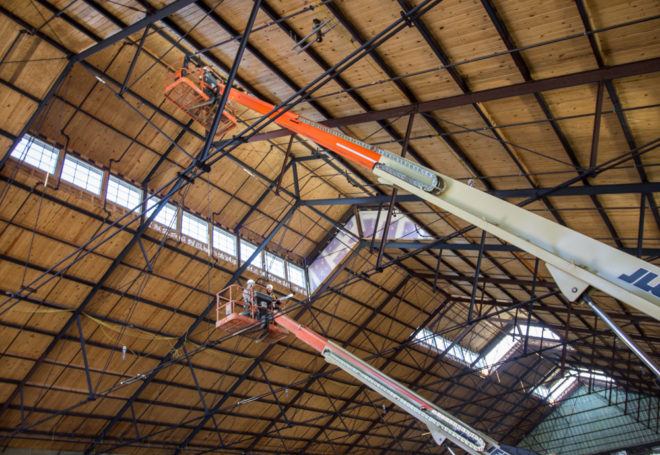 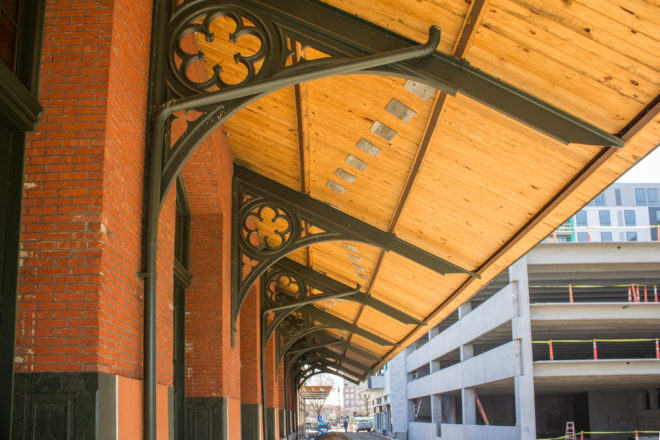 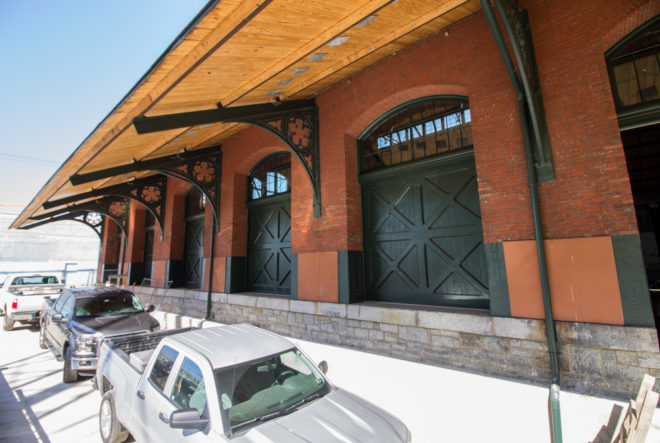 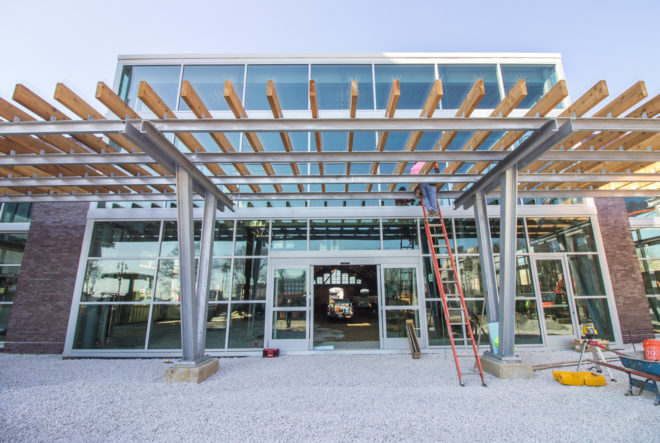 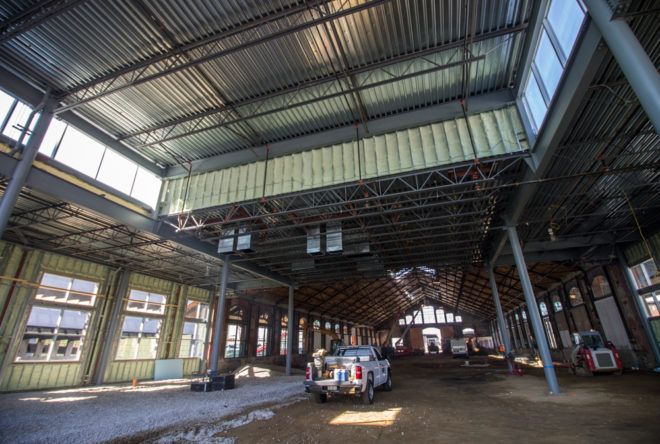 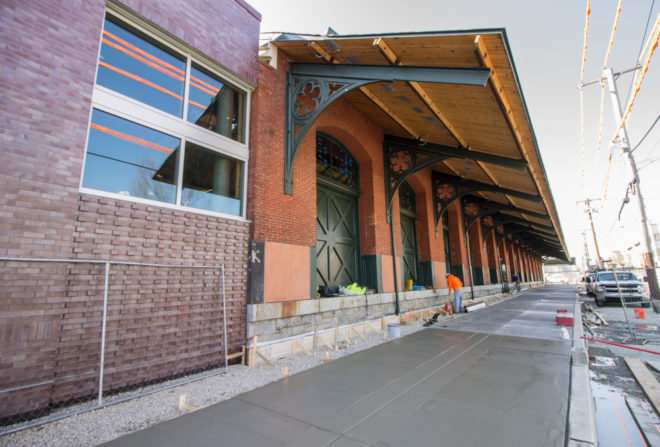 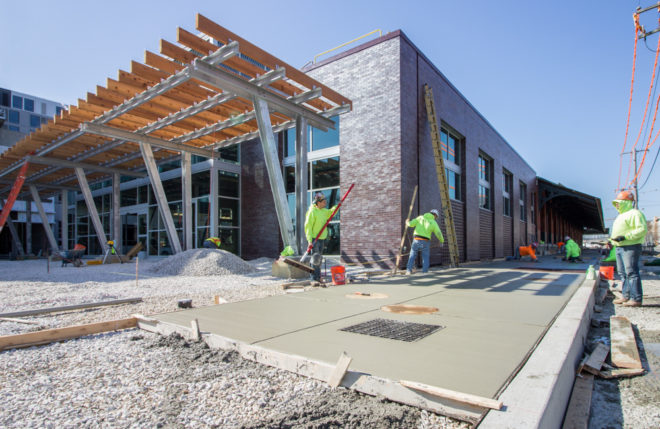