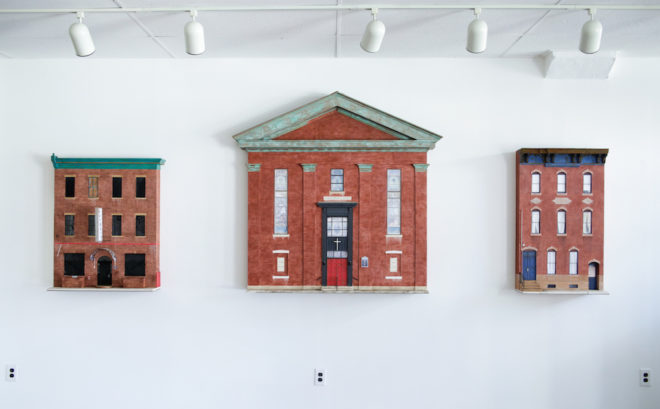 Editor’s Note: Drew Leshko has an eye for real Philadelphia. With equal parts adoration and attention to detail, the Fishtown artist centers his focus on a gritty, aging landscape of bars, banks, bodegas, and other commonplace landmarks of a disappearing city. The architectural sculptor holds a mirror up to old neighborhood anchors and everyday life through miniatures of some of the city’s most authentic, overlooked, and endangered places.

Leshko’s new exhibition, Sacred Places, at Paradigm Gallery + Studio traces the history of Fishtown through its buildings. Michael Bixler caught up with the artist to discuss urban identity, a city in transition, and preserving the character of “Old Philadelphia.”

Michael Bixler: Your new show at Paradigm Gallery + Studio, Sacred Lands, is an ode to the history of Fishtown, a neighborhood that has been redeveloping at a steady clip. Some might say it is reaching “peak gentrification” a la Williamsburg or Park Slope in Brooklyn. Can you tell me a little more about the idea behind the show and why you chose these buildings and objects to represent within this specific theme?

Drew Leshko: I’ve been documenting buildings and objects in the city for over 10 years now, and the show is a continuation of this sculptural documentation/archiving project. The commonality between all of the sculptures for this exhibition is environmental. I feel a real connection to my neighborhood and through the years have spent some time researching its history through resources like Hidden City and local historians. I think Ken Milano deserves an award for his writing and research. I wanted to put together an exhibition that visually continues the trajectory of my artwork, but at the same time also gives a nod to the history and roots of the area. Sacred Lands refers to Shackamaxon, which was what the Lenni-Lenape referred to the area that is now Fishtown, and, previous to that, Kensington. Shackamaxon was a very important place to the Lenni-Lenape as they held tribe councils here. People would travel from hundreds of miles away to convene at Shackamaxon. Given how the area looks today, its difficult to imagine the landscape then. I try to imagine the land here–roughly where Sugarhouse Casino stands today–as being a hotbed for fishing and hunting game. At the time there were multiple creeks and streams here feeding into the Delaware River.

I’ve drawn historical connections to the importance of each of the buildings I’ve sculpted for this show. Penn Treaty Metals and Penn Treaty Market are two sculptures that, in my opinion, acted as a more significant reminder to the peace treaty between William Penn and Chief Tamanend, than the small monolith erected at Penn Treaty Park. These businesses, which are both gone now, pointed out the history of our land. I love seeing the rejuvenation of the neighborhood, but I also fear losing an identity that we all should be very proud of. It’s strange to me how many “New Philadelphians” aren’t even aware of the park, let alone what happened there. I personally love the beautiful park. My wife and I were married at the site of the peace treaty and the Great Elm tree. 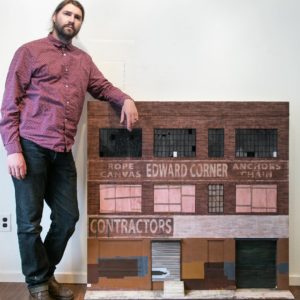 Old Brick is the oldest church in Kensington and, for me, a symbol of a time past where community meant something different. The founders of the church were also building the area to be a thriving one and this is prior to Kensington being a part of Philadelphia. I love that the congregation prior to the construction of the church would hold services at the elm tree where Penn’s Treaty was inked. I love that the natural wonder of that tree was appreciated by the natives and the settlers alike. At 24 feet in diameter, how could it not be a spiritual place. A bruise in the history of the church involved the sparking of the Nativist Riots or 1844, where protestants became hostile with the influx of Catholicism. I feel that this comparison is very timely, given the resurgence of extreme anti-immigration groups and Neo-Nativism today.

The Barbary is an unassuming corner bar and venue that may be the closest standing building related to what was once referred to as Point Pleasant, a destination, bar, and brothel in the late 1700s. Visitors would travel here for the spirits, entertainment, and to “get away” from the city. At this time, people would gather at Point Pleasant to hunt birds there at the confluence of the creeks and the Delaware River. I like to think of The Barbary as a contemporary version of Point Pleasant.

The old Bicycle Stable on Frankford Avenue is maybe my favorite building in the area. The building, to me, is symbolic of the Act of Consolidation in 1854, when Philadelphia grew its boundaries to include much more land. I’m not sure if this was the first police building constructed in this part of Kensington, but, if not, it must have been one of the first few. I understand it originally housed police horses, so perhaps the station was nearby. The presence of police here is particularly interesting to me— thinking about how the neighborhood’s people would receive this new presence, particularly after the Nativist Riots and often occurring union strikes, which often became bloody.

MB: How did you get started making miniatures, and what building, place, or object was your source of inspiration?

DL: The first miniature I made was from a kit, so I’m not sure if that should really count as a sculpture, but for sure counts as a miniature. It was a miniature of a half-pipe for skateboarding. I was doing bedrest after pectus excavatum surgery, and it was a great way to occupy my time. It was a gift from my father. Beyond that, I was assisting an artist who was making some sculptures of McMansions using McDonald’s food. That was probably my first sculptural miniature, though not my own.

In 2005, I made my first miniature sculptures–a series of water towers that existed as sculptures, but also as the subjects of photographs. In the gallery I’d show both the photographs and the sculptures as a “chicken or egg” scenario, though the works weren’t that strong.

MB: The city is currently in an escalated state of transition, and your work is an incisive catalogue of a vanishing Philadelphia. Old bars, bodegas, stores, signs–even types of urban textures like glass block, wood pallets, and rust-stained stucco–are captured in your work with sharp, accurate detail. Would you say that your miniatures serve to preserve the memory of Philly’s raw sense of place that is being swept away or is there some larger message at play?

DL: It’s definitely an attempt to preserve memories, whether good or bad, beautiful or ugly. I think the easiest way for me to describe it is that I work the same way as a documentary photographer or a plein air painter capturing a moment in time. I just can’t paint well, and I don’t find straight photography as a primary medium all that interesting.

MB: What is your process for picking a building or object, and are you drawn to certain neighborhoods over others?

DL: This is a difficult question for me. Some buildings speak to me, and some don’t. I do know that I am influence by my environment and I think almost every artist is. Sometimes its the original architecture, sometimes its the contemporary problem solving and shoddy solutions. Sometimes its an attempt to forecast what may not be here tomorrow. 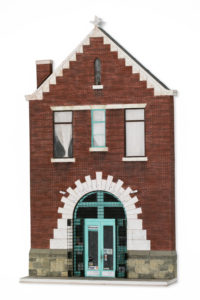 MB: Philadelphia’s built environment is losing its signature grit to neighborhood redevelopment and new construction. Your work encapsulates the spirit of what some call “Old Philadelphia.” I’m particularly fond of your miniature of The Forum, Center City’s last big porn theater complex on Market Street that was demolished in 2013.  Your piece, Revival Temple, which depicts the bruised facade of a row house church in North Philly, is another one that speaks to the salty sincerity of neighborhood fabric being bulldozed for student housing and luxury condominiums. Do you think the real estate frenzy and all of this new construction is stripping the city of its character and personality?

DL: I try to remind myself that one of the beautiful parts of living in a city is the constant evolution that occurs. While I don’t feel comfortable saying that the new construction is stripping the city of its character and personality, I think I can say that certain parts of the city have been stripped. I just hope the owners of the new condos decide to stick around a while. You know, after their 10-year tax abatement expires. For me, the saddest part is seeing my friends and neighbors moving away because of the new changes. My studio landlord who became one of my best friends had to sell his property and move. He said he couldn’t afford the new taxes. I bought my home 10 years ago and now none of the same neighbors are here. It is bizarre and sad.

The one thing that I routinely notice is the disappearing green spaces. Sometimes they’re not so much planned public space, but rather just abandoned lots. Something about the open space, or the lack of open space, is making the city feel much different.

MB: Your work explores decay, transition, and the looming specter of gentrification. Are there any places that are gone now that you wish you had preserved in your work?

MB: There is a T-shirt floating around with the slogan, ” I Miss The Old Philadelphia.” While witty and somewhat fitting, it is a pretty loaded statement coming from a rather comfortable vantage point in the city’s history. Not to sound preachy here, but it doesn’t factor in “Old Philadelphia’s” crippling poverty, systemic government corruption, world famous police brutality, pervasive racism, casual street violence, polluted rivers, deep economic decline, etc, etc. As a Philly artist working to preserve the spirit of a disappearing city, how do you reconcile this notion of the genuine loss of “Old Philadelphia” with our current upward shift in economic growth, increased quality of life, and the growing list of civic improvements like new public parks, renovated libraries, increased homeless and addiction outreach, cleaner rivers, safer streets, et al?

DL: Yes, I’ve seen the shirts. I really like the bumper sticker version that adds “before you were here” in small font. But I’m not a native-born Philadelphian. I’ve only lived here for 10 years now. It feels like a while, but I’m reminded by my “old timer” friends that, even after a decade, I’m still new here.

Listen, I completely agree. Our current vantage point is mostly comfortable, mostly safe, and mostly improving, but obviously we have a way to go. As humans, as Americans, and as Philadelphians. I hope that my sculptures encourage people to stop, look around, and acknowledge the present all while considering the past and using those experiences to build a better future.

Sacred Lands, a sculptural exploration of the history of Fishtown by Drew Leshko, opens at Paradigm Gallery + Studio, 746 S. 4th Street on Friday, March 23 with a public reception from 5:30PM – 10:00PM. The exhibition is on view until May 19, 2018. See gallery hours and additional information at Paradigmarts.org.