A Mid-century Mirage At 13th & Lombard 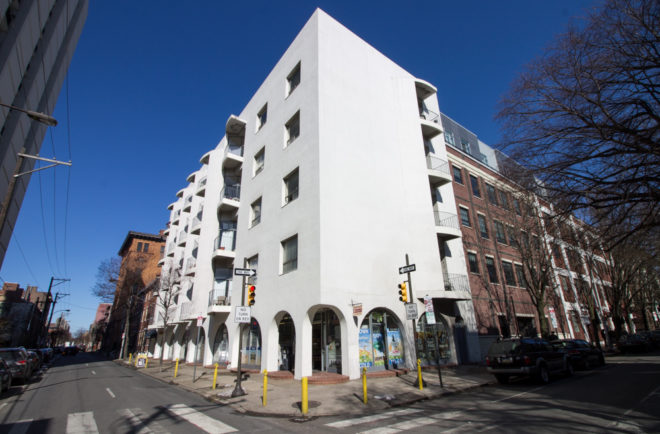 When Modernist architect Frank Weise overhauled the facade of this old industrial building in the 1960s, he concealed its history in a thick layer of white stucco. | Photo: Michael Bixler

For over 50 years this unusual-looking apartment building at 13th and Lombard has been hiding its industrial origins. At nearly a century old, the building is much older than it looks because of curvy alterations and a Modernist disguise shaped in white stucco.

The H.K. Mulford pharmaceutical company established themselves in the middle of the 400 block of 13th Street between Pine and Lombard Streets in the late 19th century. Over time the company continuously added to their factory bit-by-bit. In 1915, they purchased a few smaller buildings at the northwest corner of 13th and Lombard and built an eight-story addition at 424-426 Lombard Street that was demolished 1930s, leaving the corner and some smaller buildings on Lombard for future development projects that never happened.

In 1926, the Mulford Company sold the entire property on 13th Street to the American Realty Company. The real estate firm sold the corner properties at 426-428 South 13th Street along with 1307-11 Lombard Street to the Superb Realty Company one year later. Superb Realty partnered with burlap bag makers Pottash Brothers to construct a speculative five-story industrial building. The firm had previously worked with Pottash Brothers on one of their own factories that still stands at the corner of Water and Wolf Streets that was partially cut by I-95. 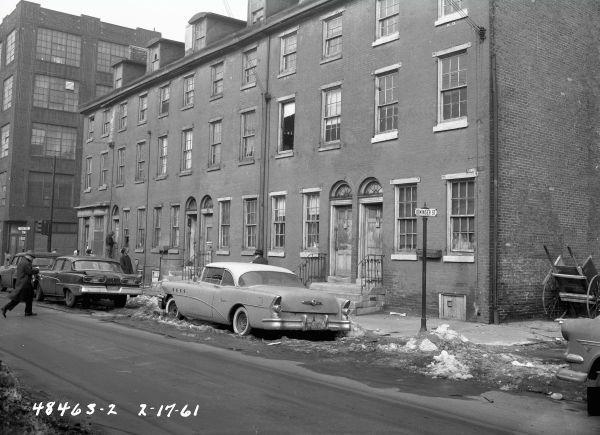 The Pottash Building’s original facade in 1961. | Image courtesy of PhillyHistory.org

The new Pottash Building was finished by the end of 1928. A wide variety of companies and offices soon filled the building, including clothing makers like the H. Busch Company, Atlas Sportswear, and the Perfect Trouser Company before it was famous for producing most of the U.S. Military’s pants in World War II. A succession of chemical laboratories on the first floor and both the Paragon Lamp Shade Company and the Sculptron Lamp Company set up shop on the floors above.

In the late 1940s, dress and blouse maker Joseph Zaltzman took partial ownership of the property and occupied most of the building with his company. Storefronts were installed on the ground floor. Among the more notable stores to move in was the Jim Simon Factory Showroom, a suit store. The grand opening of the suit store was heavily advertised with a raffle of free suits and a celebrity guest, the former Cleveland Brown and Philadelphia Eagles defensive end Bob Oristaglio.

One interesting company to move into the Pottash Building during this time period was Opalite Inc, which made floating opal costume jewelry. Floating opal is bits of opal floating in oil inside of a clear glass container that is usually round or teardrop-shaped. Samuel Stonberg, founder of the company, did not invent the form of jewelry, but improved upon it. Floating opal jewelry from Opalite Inc. continues to be a sought-after collector’s item today. 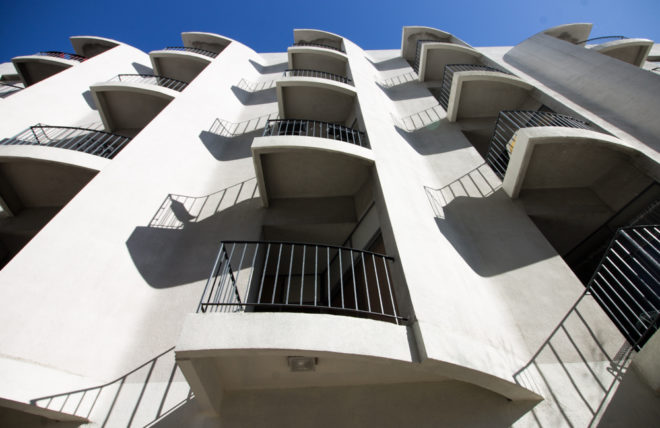 At the beginning of the 1960s, redevelopment of the city was in full swing. Across the street from the Potash Building the Casa Fermi senior home (now called Casa Farnese) was built. The Hana Corporation, a real estate development firm, took ownership of the building in 1964 and converted it to 30 apartments a year later with ground floor retail. The overhaul was designed by local architect Frank Weise, who was commissioned for some of the other mid-century homes in the neighborhood and surrounding suburbs. He would go on to design the restoration of Headhouse Square.

The large windows of the old Pottash Building were greatly reduced in size and interesting rounded balconies were installed. Six roof decks with rounded covers were built. On the ground floor, the retail spaces were set behind an arcade of half-circle arches. The entire exterior was covered in stucco and painted white, perhaps to match Casa Fermi’s facade.

A pet supply store, beauty parlor, and dry cleaner moved into the retail spaces, but the main corner space remained vacant. Finally, in 1967, Town Food Market moved in and never left. While revitalization of the rest of Washington Square West moved at a snail’s pace, the neighborhood eventually evolved into the vibrant and diverse enclave that it is today. The Alvin M. Levin & Son Company, successor to the developer that converted the old Pottash Building to residential, still owns the building and manages it from their headquarters at 11th and Bainbridge Streets.