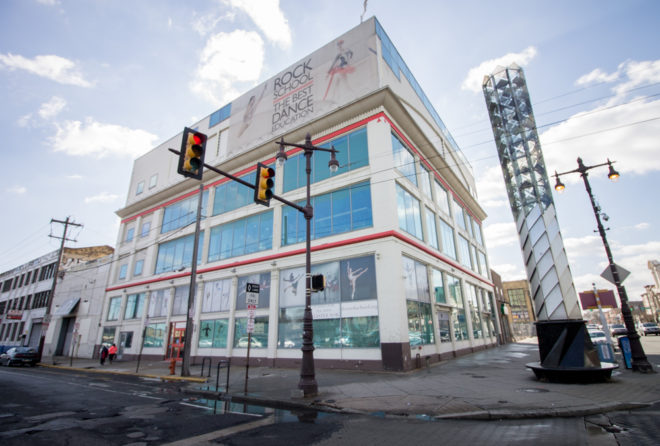 This former car dealership has been a cornerstone of classical dance training in Philadelphia for over 30 years. | Photo: Michael Bixler

In 1922, car salesman John M. Duff worked at the Philadelphia branch of the Nash Motor Company on Automobile Row in North Philadelphia. Looking to capitalize on the smaller Automobile Row that was growing on South Broad Street, Duff set out to open his own Nash branch dealership. He set up shop in a small building at 1113 South Broad Street, just below Washington Avenue, and opened the Duff-Nash Motor Company. Today, the building remains an anchor of the southern point of the Avenue of the Arts and has served The Rock School for Dance Education for over 30 years.

Following a large upgrade to the Nash location at Broad and Thompson Streets, the same architect, Philip Tyre, was commissioned to design a new building for the Duff-Nash Motor Company. However, at three stories on an 86′ x 100′ footprint, the modest dealership wouldn’t be quite as impressive as the North Broad facility. The design was rather simple, with the facade decorated with pilasters between the windows.

Duff expanded his dealership portfolio in 1930. He continued to sell Nash cars at the company’s original location at 1113 South Broad Street, while 1101 Washington Avenue became Brown-Duff Chevrolet. The dealership managed to stay operational at that location until 1953.

In 1954, the building became Potamkin Chevrolet. Victor Potamkin, a native Philadelphian and natural-born salesman, spent his early adulthood selling fish and chicken on the sidewalk at 4th and Queen Streets just like his father. A master of innovation, Potamkin started selling chicken in parts instead of the whole and made up the slogan, “Be Smart, Buy a Part.” At 35, Potamkin had enough capital to open a Ford-Lincoln-Mercury dealership in the Wissinoming section of Northeast Philadelphia, at the time a Jewish enclave.

By the late 1940s most Americans were aware of Henry Ford’s anti-Semitism, his history of business dealings with Nazi Germany, and his company’s links to wartime slave labor in Poland. Ford died in 1947, but his reputation for sympathizing with Adolph Hitler during WWII carried on, and Potamkin’s dealership was unable to sell any Ford-related automobiles in Wissinoming. Potamkin, who was Jewish himself, was desperate to find his way out of the mess. In 1948, he contacted the first president of Israel, Chaim Weizmann, and asked if he would accept a Lincoln as a gift. Weizmann accepted and a highly publicized photo-op followed. 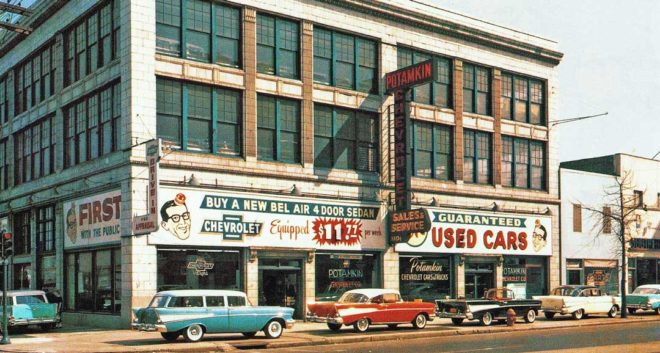 Over the next year, Potamkin sold over 1,200 units and became the most successful Lincoln-Mercury dealership in the country. He sold the dealership in 1958 and opened Potamkin Chevrolet at South Broad Street and Washington Avenue. The dealership was a sweeping success, and Potamkin opened two more locations in Newark and Miami Beach.

In the early 1970s, Potamkin handed over his Chevrolet dealerships to his sons. The one at Broad and Washington was renamed Potamkin-Auerbach Chevrolet. Potamkin was hired by General Motors to run their Manhattan Cadillac dealership that was losing $2 million a year. The enterprising car dealer hit the ground running, launching a groovy, Disco-themed advertising campaign starring his wife, Luba, and going so far as to answering the dealership’s main phone line himself. In 1975, Potamkin was the country’s most prolific Cadillac dealer. Today, Potamkin is a franchise with 50 locations in five states with 1,500 employees.

By 1985, Potamkin’s old dealership at Broad and Washington had closed and the building was being used to store video arcade machines. In 1986, a gift from Dr. Milton Rock enabled the Pennsylvania Ballet to purchase the old car dealership with the intent of moving their dance school there. Dr. Rock, another great son of Philadelphia, was arguably even more accomplished than Victor Potamkin. The psychologist, Army veteran, author, world-famous management consultant, philanthropist, and numerous other distinctions, was a great patron of Philadelphia’s arts community. He died just last month on January 30 at age 96.

In 1988, the school commissioned local architecture firm Dagit/Saylor to design an addition, raising the overall height of the building to 67 feet. The school was later renamed the Shirley Rock School of the Pennsylvania Ballet after Dr. Rock’s wife. Three decades later the school is flourishing with an annual enrollment of 1,200-students.