The Lasting Mark Of An Architect/Developer 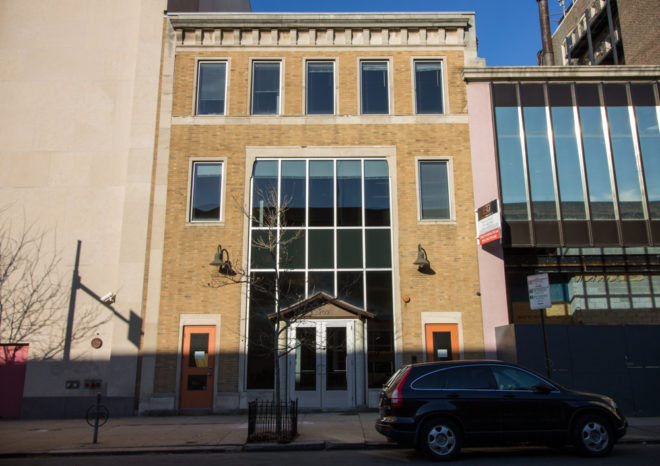 The blocked up windows of 2209 Chestnut Street were recently reconfigured to their original design, restoring the entryway to its weird and wonderful wow factor. | Photo: Michael Bixler

The life’s work of architect and engineer Richard Kerns Jr.’s is known for two things–his role as both the developer and designer of a subdivision in Wynnewood Township, Pennsylvania and his national reputation as a skilled dog breeder. Kerns also made a small mark on Philadelphia that still survives today: a small, unique office building at 2209 Chestnut Street.

Richard Kerns Jr. was a man way ahead of his time. His career as an architect began with commissions for theaters and retail buildings, many of which still stand like the Palace Theatre in Coatsville. After designing and building his own home on Merbrook Lane in Merion Station, Kerns was inundated with commissions for houses. In an unusual move for architects in the early 20th century, Kerns became a real estate developer.

His company was called the Wynnewood Realty Company. Kerns acted as president of the company and secretary-treasurer of the Wynnewood Construction Company. Kerns partnered with C.J. Gallagher, an experienced developer and real estate professional. Together they were able to acquire large tracts of land in Wynnewood Township and began selling pre-construction homes in the area in 1925. Advertisements for one of their first major developments, The Wynnewoods, a group of large homes off of Knox Road in Wynnewood, PA, touted Kerns’ designs as a call-back to old English manor houses.

The advertisement read, “You are in rural England the moment you round Knox Road. Although your motor has whisked you only seven miles from Rittenhouse Square, your imagination has traveled at least three thousand miles—enter a spot where appearance and charm carry you back to quaint old Sussex!” 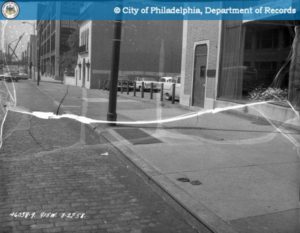 Customers had the choice of existing home designs or having Kerns design a custom home based on their own parameters. A house designed and built for a Theodore Casey at 615 Sussex Road in The Wynnewoods development was featured in the AIA/T-Square Yearbook in 1926 and the book Modern Homes: Their Design and Construction in 1930. Ironically, the 3,800-square-foot, 5-bedroom, 3-bathroom home was also featured in a periodical titled “The Small Home.” While this was all happening, dogs that Kerns and his wife bred were taking home trophies at dog shows all across the country.

The offices of Wynnewood Realty Company were at 109 South 22nd Street, just below Chestnut Street. Around 1927, a parking lot and old row house that was converted into an office at 2209-11 Chestnut Street were both for sale. Perhaps the proximity of Kerns’ office to the site attracted his company to the property. Wynnewood Realty Company purchased the two properties with plans for a 3-story speculative office building designed by Kerns.

The new 14,757 square foot building was completed by 1928. The original version of the façade had two front doors, one on the east side and one on the west side. In the middle, a large display window covered roughly half of both the first and second floors.

The first occupant of the building was the Philadelphia sales offices of the H. B. Smith Company, a manufacturer of radiators, boilers, valves, and other heating supplies. This company installed the heating systems in several well-known Philadelphia buildings like the Oppenheim & Collins building (now The Collins), the Drexel Building at 15th and Walnut Streets, and the West Philadelphia Title & Trust Company.

By the time H.B. Smith moved out in the late 1930s, Kerns continued to develop housing on the Main Line. In 1938, Kerns pioneered a new construction method for these houses, using a skeleton of thin, lightweight latticed steel as structural support.

From 1933 to 1952, the upper floors of the building were home to the Cowanova Studios, the dance instruction studios of Florence Cowanova, a nationally renowned dance teacher that taught classes to the daughters of the most socially prominent families in Philadelphia. Known as a dance prodigy, Cowanova taught her first dance class at age 11 and had a prominent dance school at the old George W Childs mansion that once stood at 22nd and Walnut Streets by the 1920s. She expanded the school into branches across the country, and 2209 Chestnut Street was her headquarters. Cowanova’s school continued on well after it moved out of 2209 Chestnut Street, finally closing in 1996 following her death in 1992. 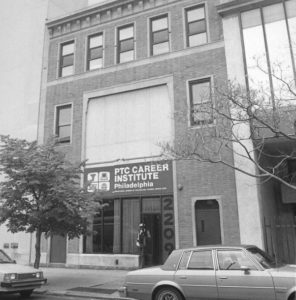 From 1953 to 1966, a series of insurance companies used the entire building for offices. In the 1970s, 2209 Chestnut Street was shared by a Montessori school, the architecture and engineering firm M. Michael Garber & Associates, and the Philadelphia Training Center, a trade school.

The Philadelphia Training Center expanded to fill the entire building and eventually spilled over into the building next door by the 1980s. The school was renamed the PTC Career Institute and offered courses in nursing assistance, office computing, and building maintenance and security. By the early 1990s, PTC had expanded into five other major cities with an enrollment roster of 6,000 students. It all came crashing down in 1994 when the Friedberg family that owned and operated the schools was exposed for tax evasion and extreme misuse of federal funds from the Department of Education.

Since PTC vacated 2209 Chestnut Street, it has been the home of Bruce E. Brooks & Associates Consulting Engineers. Founded in 1980, this firm has designed mechanical, electrical, plumbing, fire protection and life safety systems for buildings all over the region. In 2001, the firm partially restored the façade of 2209 Chestnut to something more representative of the exterior’s original look. The large, second floor windows, which had been filled in decades before, were reconstructed to their original size.

Today, its not unusual for architects to move into the real estate development field. Onion Flats is an example of an local development firm founded by an architect that has had success merging the creative and business worlds into a profitable enterprise. 2209 Chestnut Street is a 90-year-old reminder that this concept can have long-lasting results.