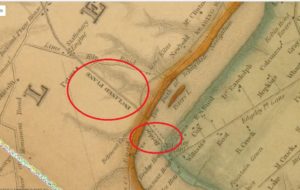 Charles Ellet, Jr.’s 1843 map of Philadelphia County is possibly the only one that shows the Belmont Inclined Plane during its short time of operation (1834-1850). Also shown is the first Columbia Bridge over the Schuylkill River. The third Columbia Bridge is still used today by CSX freight trains. From the Greater Philadelphia History Network (www.philageohistory.org).