On The Hunt For Brains, Discovering The Wistar Institute

Several years ago when I was doing a bit of genealogical research I came across a Philadelphia Inquirer headline from April 10, 1912 that read, “Musser Brain in Institute: Added to Wistar Collection Soon After Physician’s Death.” The Musser in question, Dr. John Herr Musser, is related to my husband’s family. Dr. Musser made a pact with several other distinguished medical scientists 16 years before his death to donate his brain to The Wistar Institute in West Philadelphia. His brain was discovered to weigh only 33 ounces, just one ounce over the minimum weight of what was then believed to be required for normal intelligence. Everything these scientists thought they knew was upended by the discovery. Dr. Musser, a graduate of the University of Pennsylvania, descended from a line of physicians. He was an author, a consulting physician at several Philadelphia hospitals, an authority on heart issues, and the first president of the American Medical Association. In other words, he was a very smart man. 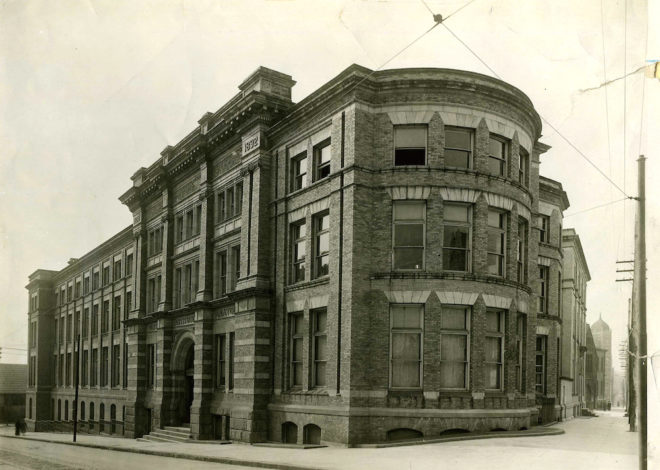 The Wistar Institute on the 3600 block of Spruce Street is an interesting mix of old and new. Its original Victorian building, built in 1894 and designed by brothers G.W. and H.D. Hewitt, is accompanied by the Cancer Research Building that opened in 1975 and was designed by the firm Mansell, Lewis and Fugate. The newest, glassy addition, the $100 million Robert & Penny Fox Research Tower, opened in 2014 and was designed by architecture and engineering firm Ballinger. Although The Wistar Institute is located on Penn’s campus, is not actually part of the university and has long been an independent entity altogether.

The Wistar Institute of Anatomy and Biology evolved through a need for the restoration of the Wistar and Horner Museum collection, which was housed on Penn’s original campus at 4th and Arch Streets. The collection was started by the venerable Dr. Caspar Wistar, whose popular anatomy lectures at Penn drew large crowds. To help students visualize his lectures, the Institute commissioned sculptor William Rush to construct oversized anatomical models that would be visible in the vast amphitheater where he lectured. Rush’s 21 original wood and papier-mâché bodies would eventually become part of an immense collection of anatomical models. Dr. William Edmonds Horner took over as curator of the collection, adding his own vast collection of skeletal materials and skulls.

Upon Dr. Horner’s death in 1853, the collection was left in the charge of the University of Pennsylvania. Dr. Joseph Leidy expanded the collection with hundreds more anatomical, botanical, and animal specimens. By 1890, the entire collection, battered from classroom use and compromised by a fire, was in need of conservation. Penn Provost William Pepper approached Isaac J. Wistar for funding to restore the collection. The prosperous Wistar decided to honor the great-uncle he never knew by constructing a building to house the museum. Penn provided a parcel of land as part of the original deed of trust. The incorporation of The Wistar Institute took place on April 22, 1892, and its original building was dedicated on May 21, 1894. The two institutions agreed that, while their relationship should always be one of collaboration, they would maintain strict independence.

Under the leadership of zoologist Horace Jayne, who served as the second director from 1894-1905, the primary mission of the Institute was museum work, an enterprise that was widely practiced during this period. The museum’s collection had grown to include tens of thousands of anatomical teaching aids, skeletons, and wax-injected organs, which were as popular with Penn medical students as they were local artists.

It would take The Wistar Institute’s third director, Milton J. Greenman, to lead the organization in the direction first envisioned by founder Isaac Wistar as “seekers after new and original knowledge.” Greenman was only 27 years old when he was named director in 1905. Having served as assistant director under Jayne, he already had a keen sense of how the Institute could blossom from a museum into playing a significant role in scientific research. Greenman convened an advisory board of 20 leading anatomists and zoologists from around the country. Referred to as the “conference of anatomists,” the men came together at the Wistar Institute to debate the future of biological research and medical training. The scientists were no longer satisfied to merely describe their observations. They wanted to move beyond the collection to something more progressive. By the end of the conference they established research as the primary objective of The Wistar Institute and set forth three distinct areas of focus—neurology, comparative anatomy, and embryology.

The Brain that Broke Science 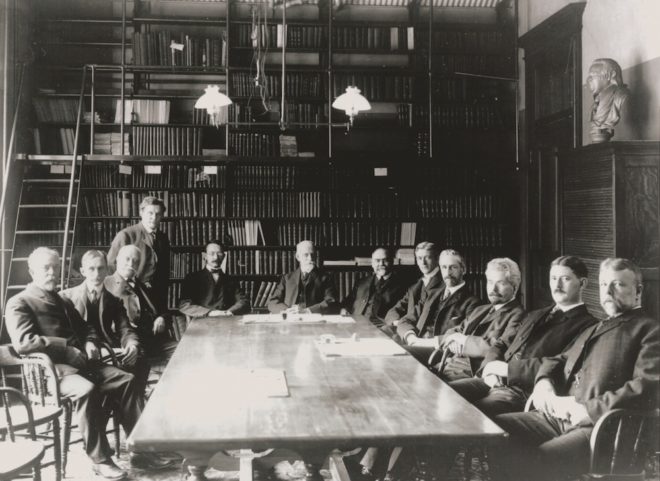 It should come as no surprise that a collection of brains would find a home at The Wistar Institute. The Anthropometric Society was formed around 1890 to advance the study of brain science. The original founders included many familiar Philadelphia names: Joseph and Thomas Leidy, Edward Drinker Cope, and S. Weir Mitchell (founder of the Franklin Inn Club), along with Penn Provost William Pepper and Isaac Wistar himself. The families of these men pledged that, upon their death, the brain of said member would be immediately removed and sent to Dr. Greenman at the institute where it would then be placed in Ohlmacher’s fluid. Later, the brain would be weighed, photographed, and analyzed. Collecting the world’s “smartest” brains was key to the undertaking, as these men hoped to prove the prevailing theory at the time that the size of a person’s brain was directly related to their intelligence; the bigger, or heavier, the brain, the smarter the person. The preeminent American Philosophical Society published “A Study of the Brains of Six Eminent Scientists and Scholars Belonging to the American Anthropometric Society,” in 1907, which advocated for this popular theory.

All was well with this theory until April 1912 when Greenman received the brain of Dr. John Herr Musser. As previously mentioned, Musser’s brain was only one ounce heavier than the prevailing medical opinion that normal intelligence required a brain of at least 32 ounces. This fact set off a very public argument between Dr. Edward Anthony Spitzka, author of the APS brain study and director of the Daniel Baugh Institute of Anatomy, part of Jefferson Medical College, and several popular national publications. 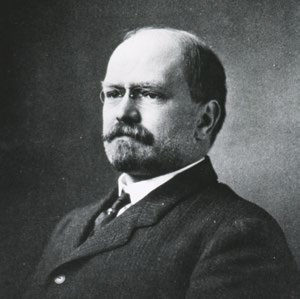 Scientists got more than they bargained for when Dr. John Herr Musser donated his brain to medical research. | Image courtesy the Perlman School of Medicine, University of Pennsylvania.

The published debate was reprinted in newspapers across the country throughout 1912. In May, The New York World compared Musser’s 33-ounce brain to Daniel Webster’s 53.5-ounce and French zoologist Georges Cuvier’s 64.5-ounce brains. The author of the article speculated that perhaps Musser’s narrow medical focus prevented other parts of his brain from growing. He concluded that great intelligence could be harnessed in a mere 33-ounce brain as surely as an illiterate bricklayer can possess a 67-ounce brain.

While many thought the theory of weight to intelligence had been thoroughly disproven, Dr. Spitzka persisted. In a New York Times article published in September, he claimed that the recorded weight of Dr. Musser’s brain had been incorrectly transcribed and was in fact 56 ounces because a 33-ounce brain could have never belonged to such an intelligent man.

In an editorial in the Philadelphia Inquirer published in April, the author reminded readers that the poet Lord Byron possessed a brain the size of Dr. Musser’s. His final thought concluded that, “Perhaps we shall have to conclude that the physiologists don’t know much about it.”

A Repository of Research Lives On

The Wistar Institute was the first independent nonprofit biomedical research institute in the United States, and it remains an organization dedicated to groundbreaking medical research and discovery. Director Greenman lead the initial move toward a modern investigation of biological processes, while taking steps to train students in the Wistar labs and encouraging publication of discoveries in scientific journals. He also worked to introduce a standardized laboratory model. Working with Henry H. Donaldson and Helen Dean King, the Institute developed the Wistar Rat, an albino rat considered ideal for study as its nervous system develops in the same manner as humans, only much faster. By the late 1930s, the albino rat was the world’s most used laboratory animal and the Wistar Rat had been featured in more than 400 articles. It was so successful that the name WISTARAT was trademarked in 1942. More than half of the current strains of rats in laboratory use today descend from the original Wistar rat colony.

A significant institutional shift occurred under the leadership of Edmond J. Farris, who was appointed director in 1937. Ferris chose to expand Greenman’s vision, encouraging diversification in anatomy, cytology, chemistry, and microbiology. While Farris became internationally known for this work on human reproduction and fertility, his expanded focus led to a decline in laboratory studies and related scientific discoveries. The modern era of The Wistar Institute would be ushered in with the appointment of Dr. Hilary Koprowski as director in 1957. Under Koprowski, any remaining traces of the museum era were erased forever. Even paleontologist Edward Drinker Cope’s skeleton of a 60-foot finback whale, which hung suspended from the building’s atrium for almost 60 years, was sent packing on a train to a new home at Chicago’s Field Museum of Natural History. Koprowski renovated the laboratories and sought out the most promising scientists and research studies from around the world. During his tenure from 1957 to 1991, The Wistar Institute achieved international prominence for its vaccine research, developing the first vaccines for polio, rubella, and rabies. 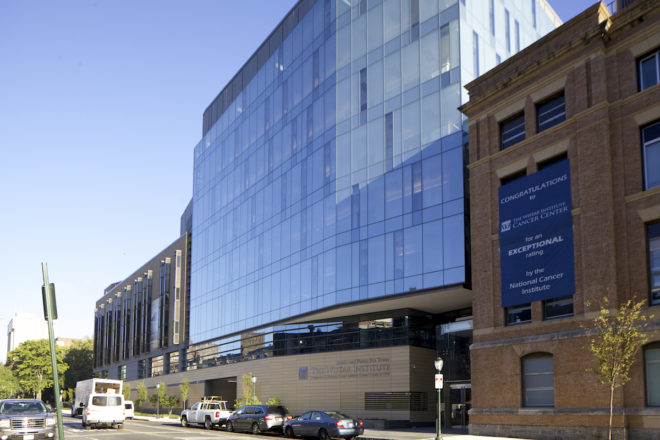 In 1972, it also earned the designation as the country’s first cancer research institute. Both cancer research and vaccine development remain central to the current work of the Institute. Recent advancements include the launch of the Wistar Vaccine & Immunotherapy Center, which was designed to draw upon the Institute’s strengths in immunology, virology, and other research disciplines to develop new vaccines for HIV, rabies, influenza, Hepatitis C, malaria, and other infectious diseases. In 2016, the Wistar Institute earned FDA approval for its first clinical trial for a DNA vaccine against Zika virus.

Sadly, I never did find Dr. John Herr Musser’s brain, but I did discover that Wistar scientists are still engaged in studying human grey matter. At present researchers are working to unveil the molecular mechanisms of brain metastasis and the interplay between cancer cells and the stromal cells that populate the brain. While current therapies are effective in controlling extracranial metastasis, they are ineffective in controlling cancers from spreading inside the brain. Research like this is a reminder that simple donations like Dr. Musser’s brain can make an invaluable contribution for generations to come.