Reading Railroad Car 1186 has been a funky North Philly landmark since the 1970s. The 96-year-old luxury diner car will be refurbished for use as the visitor’s center and headquarters of the Rail Park. | Photos: Michael Bixler

For architecture and history buffs, there is a lot to be excited about when it comes to the revival of North Broad Street. The completion of renovations to the Divine Lorraine has raised the bar for preservation possibilities and investment potentials, giving way to the pending $58 million resurrection of the Metropolitan Opera House as a Live Nation music and entertainment venue. There is the City’s plans to move the Philadelphia Police Department’s headquarters into the empty Inquirer Building. Take a few steps south and step inside the Liberty and Title Trust Building, where the Aloft Hotel chain gifted the lobby of the old bank a contemporary, yet respectfully restrained reimagining. The pleasant color palette panels on the exterior of the Studebaker showroom at 667 N. Broad Street were removed in 2016 to make way for a restoration of the original facade and 43,440 square feet of restaurant, retail, and creative office space. The owners of the old E. Hart Stable at 631 N. Broad Street, built in 1867, is wrapping up renovations and a 7-story addition that will feature 41 apartments and 5,000 square feet of ground floor retail. A bit further north, the former North Broad Station has been adapted into transitional housing and healthcare for the homeless. Shift Capital, owners of the Beury Building (aka National Bank of North Philadelphia aka Boner4Ever/Forever Boner), began leasing one-bedroom apartments in the long-abandoned Art Deco behemoth last May for occupancy in 2019. The Uptown Theater is seeing promising movement with window replacements, while the Botany 500 building at Broad and Lehigh continues its confounding slumber. I’ve savagely buried the lede so I’ll stop there, but the list really does go on and on and on. 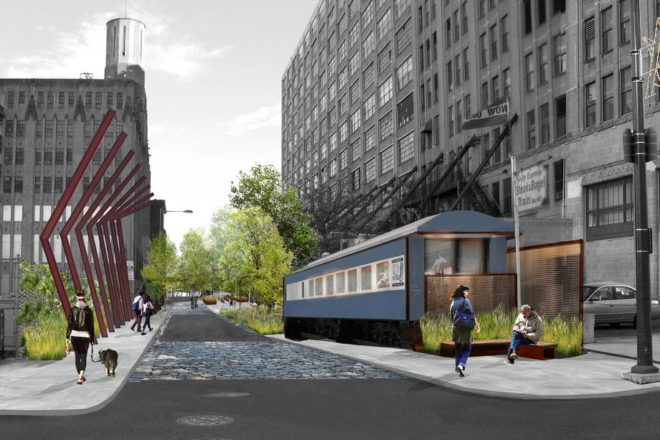 No less exciting than all of these big-ticket restorations are the plans to refurbish and reuse the old, abandoned diner train car at Broad and Noble for the headquarters of the Rail Park. Most recognize the old car for its Levis Hot Dogs signs. Built in 1922, the old Reading Railroad Car 1186 served as a cafe car on the company’s Iron Horse Rambles that once ran from Wayne Junction through Pennsylvania’s Anthracite region. It featured dining tables, a lunch counter, and a small kitchen to serve passengers as they made their way northwest. The car was sold in the late 1970s and brought to Philadelphia from Reading, PA. The train car was parked next to the hulking Terminal Commerce Building at Broad and Callowhill where Edward Mancini opened Passport Photo Express. The operators of the Philly Steak and Bagel Train returned the car to dining duty in the 1980s. The well-known greasy spoon eventually closed around 1996. Ibrahim Aly reopened the diner as the Philly Express Steak and Bagel Train and painted the car red, white, and blue. The breakfast and lunch spot closed for good in 2012 and has sat vacant since. Security gates were recently installed around Car 1186 to protect it from further vandalism and graffiti.

On Thursday, March 8 the Friends of the Rail Park are throwing a big dance party at Voyeur Nightclub to raise funds to revive and refurbish this quirky little slice of North Broad history.

For more information and tickets to the “Party for the Park” fundraiser, check out the event page HERE.