Beloved South Street Landmark To Be Demolished And Rebuilt

Bridget Foy’s restaurant has been a staple of South Street and Queen Village for 40 years. In October 2017 the building caught fire in the middle of the night causing irreparable damage to the interior. | Photo: Michael Bixler

The demolition of the corner property at 600 S. Second Street has historic preservationists further calling into question the city’s commitment to its built heritage. The three-and-a-half story brick building, the longtime location of popular Queen Village restaurant Bridget Foy’s, was constructed between 1811 and 1820 and is listed as a contributing building in the National Register of Historic Places’ Southwark Historic District. It is also featured in the National Park Service’s Historic American Buildings Survey. However, neither of these recognitions result in any regulatory teeth that help guarantee its protection in Philadelphia.

The scheduled demolition is the result of a two-alarm fire that broke out on the night of October 5, 2017 and badly damaged the building’s interior. The property’s owner, John Foy, said that after surveying the damage with contractors and structural engineers, it wouldn’t be financially feasible to rehabilitate the building. Extensive fire and water damage to the interior and structural cracks to the building’s exterior walls have rendered the building a shell. After some deliberation, Foy and his family, who have operated Bridget Foy’s restaurant in the building for the past 40 years, decided that the best option is to demolish and rebuild.

Financial considerations played a large role in the family’s decision to rebuild. When it came to determine whether or not to reopen again in the same location, Foy said his family received an “unbelievable” outpouring of support from neighbors with close personal ties to the restaurant. Emotionally drained and assessing how to move forward, the neighborhood’s response helped the Foys understand that the restaurant held a significant place in the heart of the community and it needed to reopen at 2nd and South. As Foy put it, “the neighbors made the decision for us.” 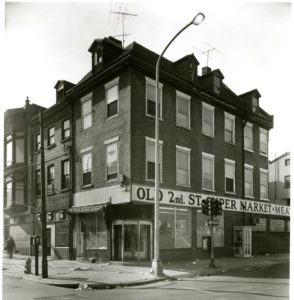 The Foys are moving forward with the design of the new building and are working with Ambit Architecture, a local firm with experience in both restoration and new construction. Architect Rich Villa says that the replacement building will nod to the site’s historic setting without simply being a replication. The new design incorporates brick, a mansard roof, and chimneys and will maintain the building’s original height and sidewalk café presence.

Like the blaze that recently destroyed yet another historic building in Old City, fire damage can severely compromise old buildings and their rehabilitation and it often creates a significant financial burden on property owners. There are, however, steps that can be taken to assist owners in restoring their historic buildings after disaster scenarios that are not implemented here in Philadelphia, aid that would be useful in the city’s highly visible and historic areas.

Preservationist and architectural historian Oscar Beisert, who is also a member of the Mayor’s Historic Preservation Task Force, said that the hipped roof and dormers on the building make it stand out. “While this was once a common form in Philadelphia, I can’t think of many surviving examples.” Beisert believes that an important step would be for the City to designate historic districts already listed on the National Register of Historic Places to the Philadelphia Register, which would give the Historical Commission some measure of regulatory sway over demolition. The case has been made before, when five historic properties on Jewelers’ Row, part of a National Register historic district, but not listed on the Philadelphia Register, were purchased by suburban real estate developers Toll Brothers who plan to demolish the buildings this year.

Paul Steinke, executive director of the Preservation Alliance for Greater Philadelphia, echoed this sentiment, calling the situation an “unfortunate loss” and cited the lack of designation of most of the city’s historic architecture as part of the issue. “The building, though apparently quite old, was not historically designated, like so much of our historic city,” Steinke said. 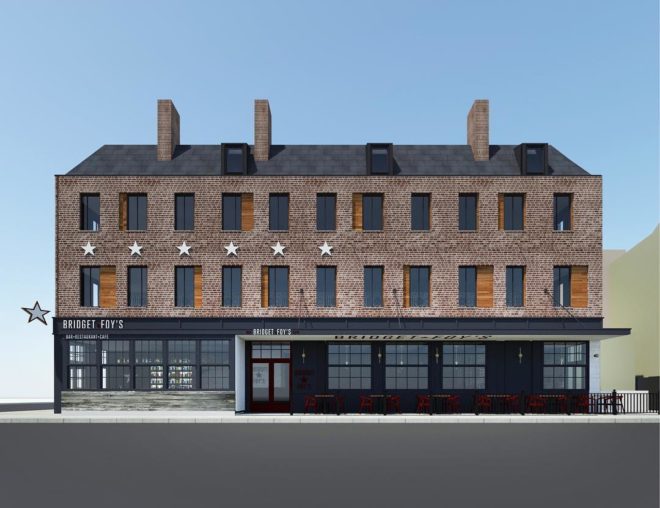 An unfinished rendering of the new Bridget Foy’s. | Image courtesy of Ambit Architecture

A number of cities provide assistance to owners who find themselves in similar positions in the form of consultation from structural engineers who are well versed in preservation and restoration and can provide alternatives to demolition. Another option, which is being floated in Jacksonville, Florida, is the creation of a revolving fund to which owners of historic structures can apply for grants to cover gaps in restoration costs that might otherwise make projects financially unviable.

While the building at 2nd and South may seem nondescript to some, it is a significant example of early Philadelphia architecture that is quickly becoming rare around the Delaware River waterfront as 18th and 19th century homes are routinely demolished for real estate development. Losing a 200-year-old building in one of the city’s oldest districts would likely prompt more of a reaction in other cities, but, more often than not, it barely raises an eyebrow in Philadelphia, a “World Heritage City.”