Art Deco Enclave In Upper Darby A Display For The Ages 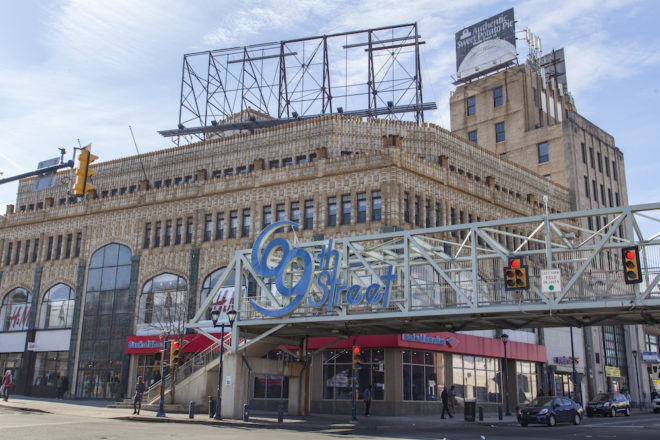 The McClatchy building is now home to Bank of America and H&M. When it opened in 1928, the first floor was occupied by Saks Fifth Avenue. | Photo: Starr Herr-Cardillo

As you pass from Philadelphia County into Upper Darby, right where the El terminates at 69th and Market Streets, you’ve probably noticed a building that will stop you in your tracks. It’s a wild Byzantine Revival shopping palace encrusted in hundreds of thousands of glazed yellow and cream terra cotta tiles in an array of shapes and motifs. It looks startlingly out of place in the suburban landscape. As you hone your vision past all of the modern visual clutter and begin to focus in on the bones of the surrounding buildings, you will notice that this particular intersection is home to a whole spectrum of Art Deco and early 20th century commercial architecture.

Real estate developer John H. McClatchy had a big vision for this fetching little enclave. After building homes in West Philadelphia just after the turn of the century, McClatchy turned his attention to Delaware County and set out to transform the area around 69th and Market Streets from farmland into an outdoor suburban shopping center. McClatchy saw the potential for development, thanks to the extension of the Market-Frankford Line in 1907, which made it within easy reach of city dwellers, residents of the township, and of neighboring suburbs. McClatchy purchased 50 acres on the south side of West Chester Pike for $6,000 per acre in 1920. Within a decade, the population of Upper Darby increased more than fourfold, with over 46,000 residents calling the township home by 1930. 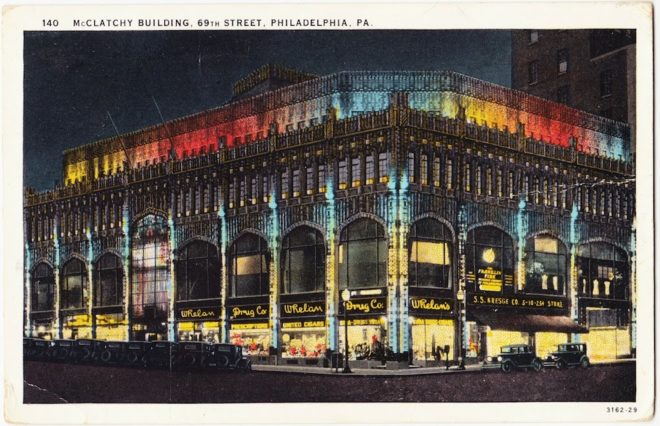 Postcard of the McClatchy Building with its colored lights, 1930. | Image courtesy of the Historical Society of Pennsylvania

After some early attempts to sell off parcels for development fell through, McClatchy set out to build what would become the cornerstone of his shopping district right across from the 69th Street Transportation Center. In 1928, the exuberant, four-story McClatchy Building was complete. Faced entirely in glazed terra cotta on its 69th and Market Street sides, the tiles themselves represent a variety of revival motifs including Mayan, Heraldic, and Egyptian. They are laid in repetitive patterns and bands, creating a mesmerizing, complex surface. Backlit pilasters made of architectural brass and colorful stained glass punctuate the façade and offer a glimpse of the building’s former glory: a 10-minute theatrical light show used to play out across its walls each hour. A Philadelphia Inquirer article from 1933 described 69th Street as a “Little Broadway” so named for the abundance of “architectural and lighting effects” present in the area.

The shopping district was successful well into the second half of the 20th century and was home to big names like Gimbels, J.C. Penney Co., and Lit Brothers over the years. When McClatchy first opened his namesake building in 1928, he rented the ground floor retail to Saks Fifth Avenue. Before business began to slow towards the end of the 1960s, the 69th Street shopping center was the top shopping destination outside of Center City Philadelphia, grossing the second highest retail sales in the region. McClatchy’s impact on commercial development in Upper Darby was prodigious, but he continued to develop housing as well, building somewhere between 30,000 and 40,000 homes in Delaware County during his lifetime.

McClatchy’s family continued to manage the 69th Street corridor long after he passed away in 1960. According to the Inquirer, in 1986 the McClatchy family contributed a total of nine percent of Upper Darby’s total property tax income due to their massive amount of real estate. In 1987, the McClatchy’s sold the majority of their holdings—four blocks along 69th between Market and Walnut Streets—to Morris S. Willner, a developer specializing in the renovation of older shopping malls. Willner planned extensive renovations to the stretch, declaring to a reporter for the Inquirer in 1987 that “there’s nothing that will be untouched on this street as far as renovations go.” 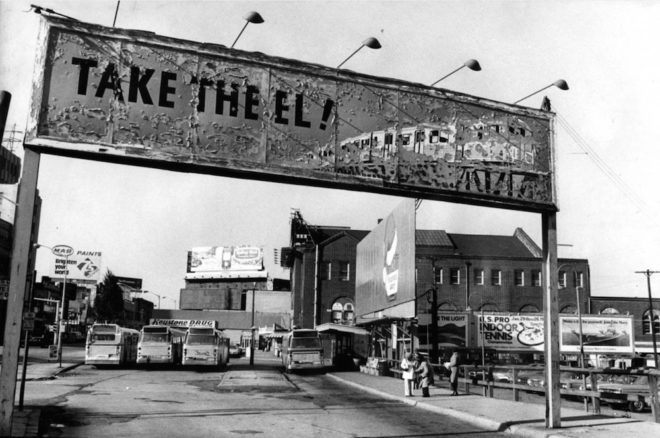 Today, the majority of 69th Street that Willner purchased looks much like any modern outlet mall, its retail spaces occupied by the usual big box chains with unremarkable façades. There are, however, a number of traces of the area’s earlier phases of development tucked in along Market Street and Garrett Road. These, along with the magnificent McClatchy building, make the 69th Street Shopping District in Upper Darby a worthy destination for any Philadelphian looking to explore just a hair, and a quick train ride, outside of the city. 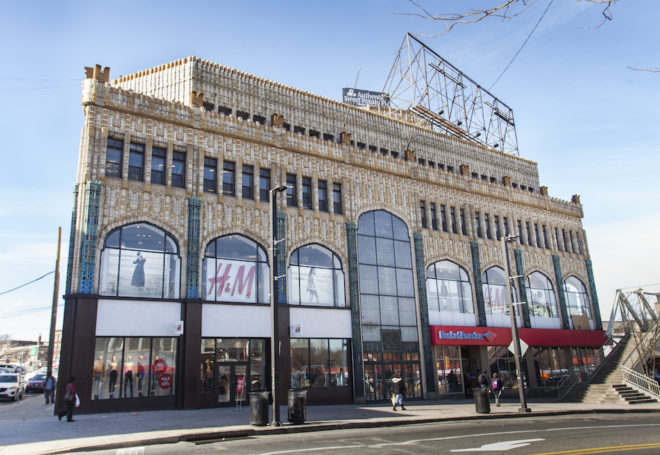 The John H. McClatchy building was completed in 1928. 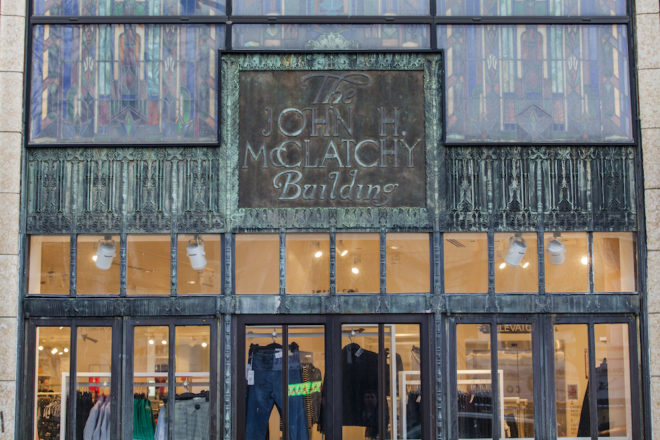 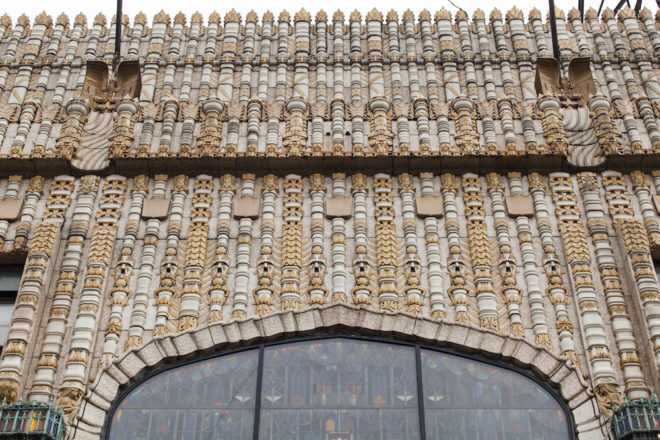 Details of the terra cotta facade. 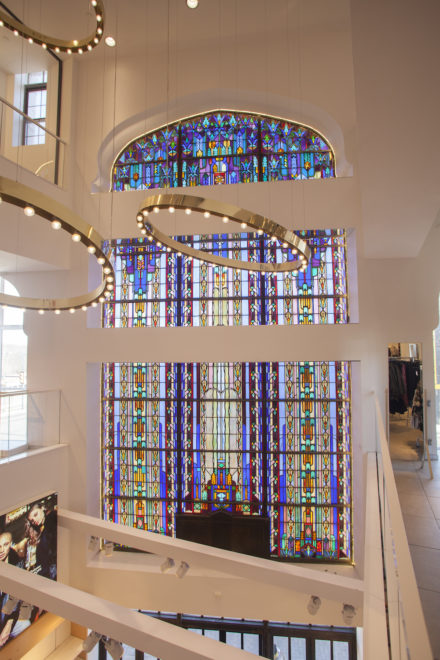 A two-story stained glass window is visible inside H&M. The window was made by D’Ascenzo studios in Philadelphia, who coincindentally, also designed windows for the Horn and Hardart Restaurant chain. 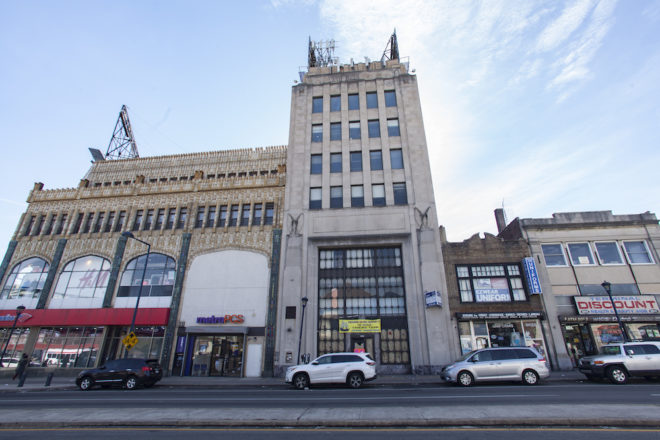 The McClatchy building sits next to the former 69th Street Title & Trust, both located within “J. H. McClatchy Place” as indicated on a 1929 Atlas of Delaware County. 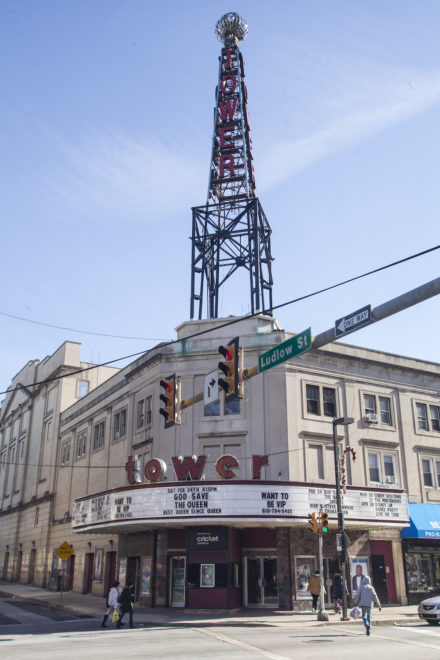 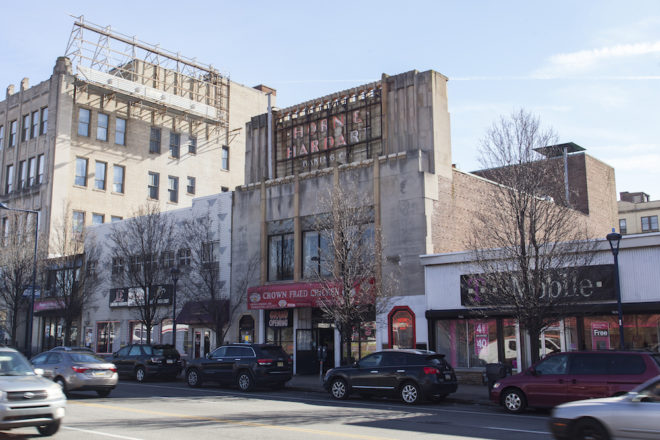 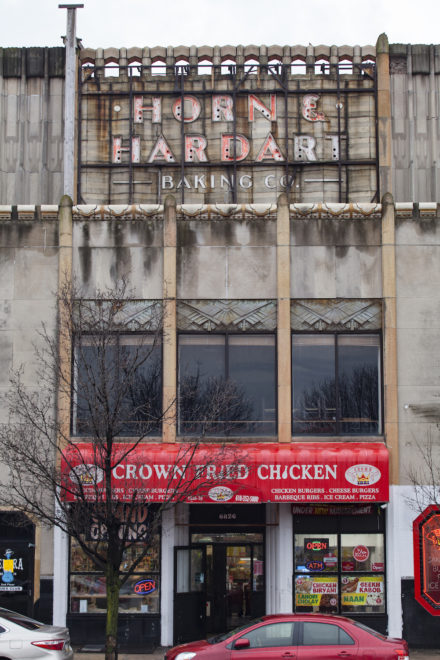 The building was designed by Ralph Bowden Bencker and also featured windows by D’Ascenzo Studios, though they have since been replaced. 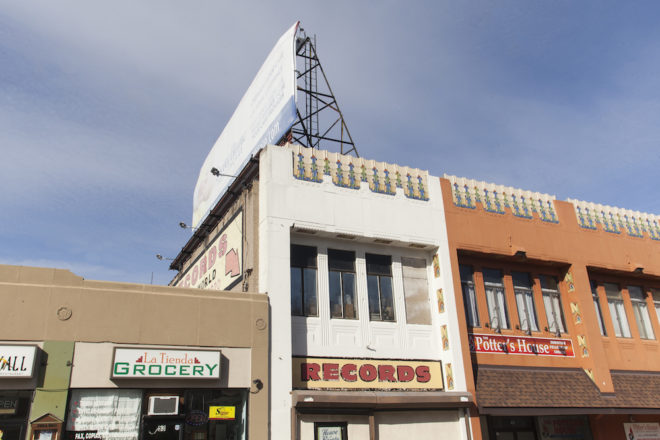 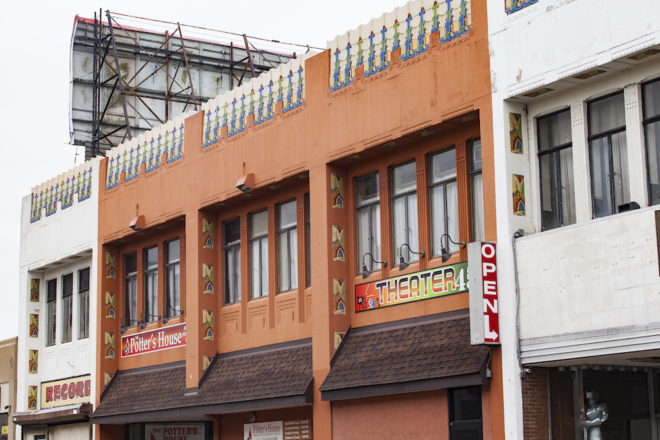 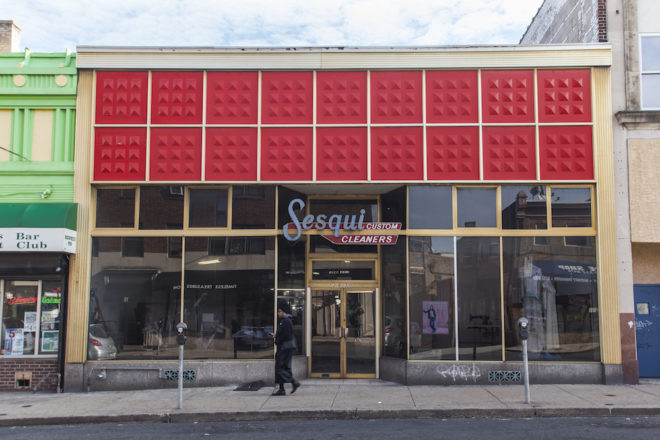 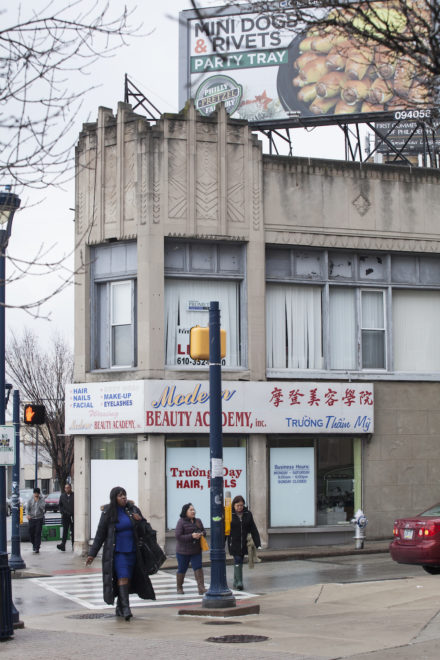 Art Deco architecture in the area ranges from subtle and austere to bold and exuberant. 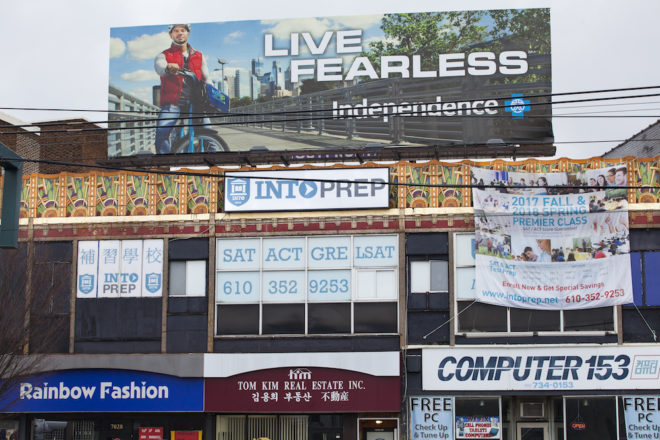 A striking glazed terra cotta cornice made of vertical, U-shaped tiles with polychromatic floral pattern hides behind modern signage at a shopping center along Terminal Square. 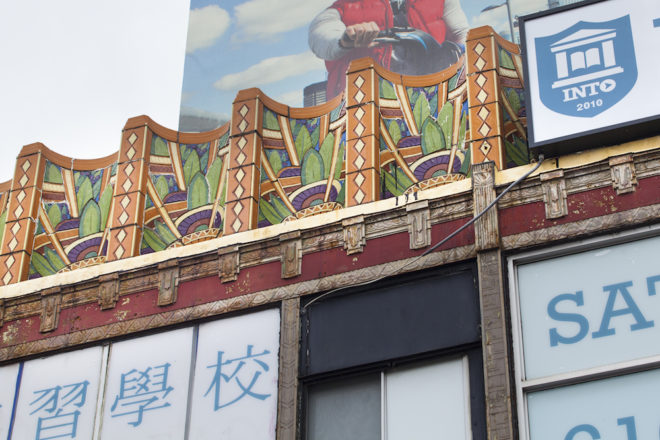 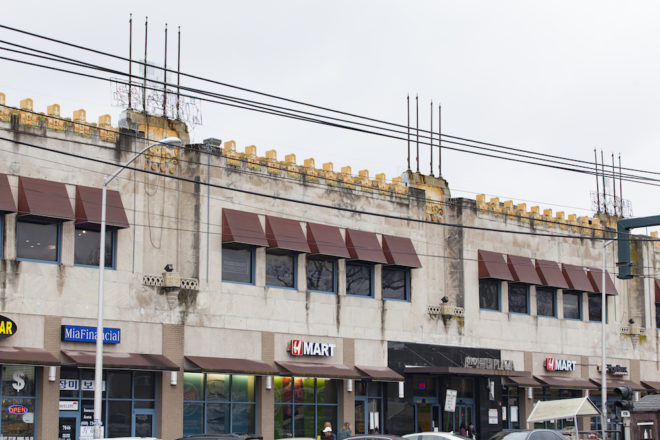 Another polychromatic Art Deco shopping center along Terminal Square is occupied by several ethnic businesses, including Hmart, an Asian grocery, and home goods store with a fantastic food court. 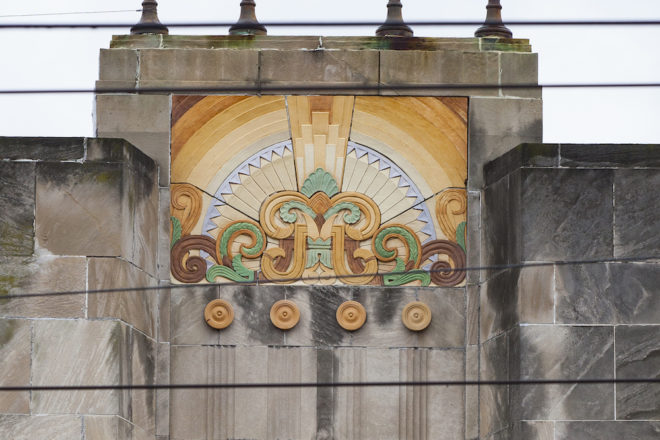