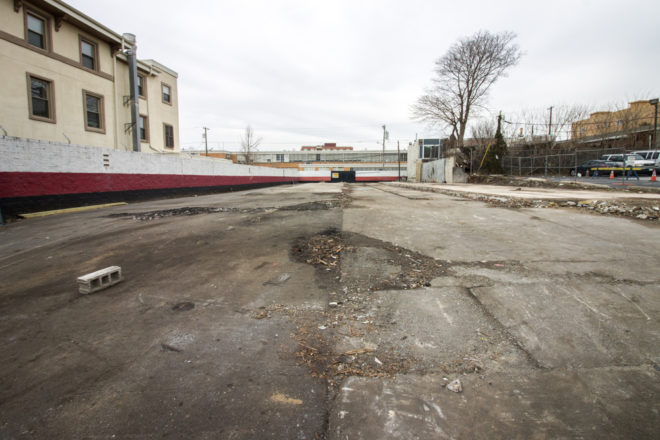 Chestnut Wash ‘n’ Lube was recently demolished to make way for 130 modular apartment units. The property was once a cemetery established by the African Baptist Church of Blockley. | Photo: Michael Bixler

In Philadelphia, you can’t go very far without walking, parking, or building on someone’s grave. The site at 4125 Chestnut Street where a six-story apartment building is slated for construction was once a graveyard. Archaeologists believe that a portion of the cemetery is the oldest African-American burial ground in West Philadelphia. The site’s developer, CRP Builders, plans to build a 130-unit modular apartment complex with commercial space and underground parking. The parcel is owned by 4125 Chestnut Street CRCP, LLC of New York. Until it was demolished earlier this month, the property was home to Chestnut Wash ‘n’ Lube, a one-story concrete block structure.

In a related matter, a 1895 G. W. Bromley & Co. Atlas indicates that the warehouse at 4046 Ludlow Street is precisely on the site of a graveyard once known as the Rose Burying Ground. Peter Rose, a major landholder in the mid-1700s in what eventually became West Philadelphia, owned the estate comprising the blocks surrounding the parcel. Rose and his wife bequeathed the estate to their descendants, with its easternmost tract reserved as a private burial ground for the Rose family. At the time, the area west of the Schuylkill River was mostly woods with a few clearings connected by meandering footpaths. Rose family members were buried at the cemetery throughout the 18th and 19th centuries. 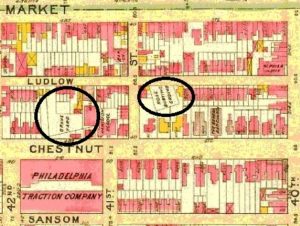 An 1895 map showing the two cemeteries in question, with the Rose Burying Ground in the center. | Map: Atlas of the City of Philadelphia, 1895, George W. & Walter S. Bromley

In 1853, they incorporated the cemetery as the Rose Family Burial Ground Association. The property was immediately next to land owned by William Hamilton, who owned Philadelphia County’s Blockley estate, which came to be called Blockley Township. A slanted property line separated the two estates and abutted the burial ground. This line can be made out in the 1895 Bromley Atlas.

The 1895 atlas shows a graveyard located on the 4100 block of Chestnut Street, the site currently being redeveloped for prefabricated apartments.The southeasternmost part of the Rose estate was designated for graveyards, whether it be the Rose Burying Ground or cemeteries for other groups. The African Friends to Harmony, a benevolent or mutual-aid association, was one such group. Organizations like this were needed in the African-American community, since benevolent societies would often provide funeral services and burial space for free.

Three trustees of African Friends acquired the ground at 4125 Chestnut Street in 1826 from the Rose family as a burial ground for the African Baptist Church of Blockley. That congregation began as a small church at nearby 41st and Ludlow Streets (northwest corner) in 1826. A replacement house of prayer was erected at the same intersection by 1846 and dedicated two years later. In 1853, it was renamed Oak Street Baptist Church. At the time, Ludlow Street was known as Oak Street. The church served as a stop on the Underground Railroad.

Needing further expansion, the congregation constructed the church building currently at 41st and Ludlow Streets by 1888. The church’s name was changed to Monumental Baptist Church. Meanwhile, the graveyard at 4125 Chestnut Street was used as a burial ground for African-Americans throughout the 19th century. It is noted on one 1880s map that the ground was owned by the Harmonia Society. 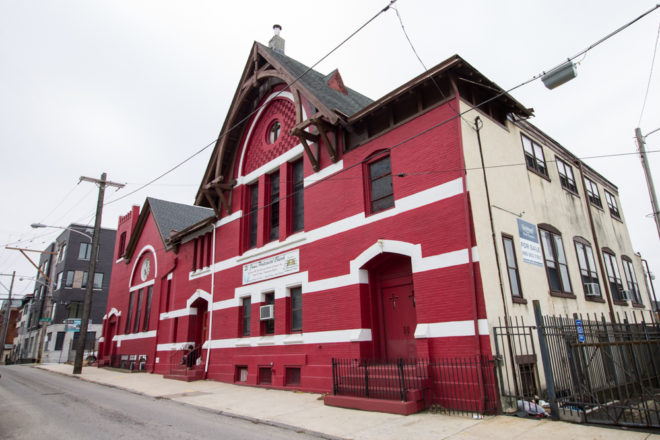 St. James Pentecostal Church, at 8 South 41st Street, is up for sale. The building’s original owners, the congregation of the African Baptist Church of Blockley (Oak Street Baptist Church), administered the burial ground at 4125 Chestnut Street and was connected to the Underground Railroad. | Photo: Michael Bixler

A replacement church building for the Monumental Baptist Church was purchased and dedicated in 1967 at 4948 Locust Street. The building was originally built for Old First Reformed Church of Christ (United Church of Christ), erected when that congregation left the Old City area in 1882. By 1967, Old First Reformed decided to move back to Old City (to its original building, no less) and sold its West Philadelphia home to Monumental Baptist Church. That congregation is still at 50th and Locust today.

The old Oak Street Baptist Church at 41st and Ludlow Streets was sold to St. James Pentecostal Church for $55,000 in 1967. The handsome red building is now for sale, and will likely give way to development pressure bearing down on the neighborhoods surrounding University City. (Note that  St. James is now on the Philadelphia Register thanks to the hard work of Oscar Beisert, et al.)

By the late 19th century, the Rose family had spread throughout the United States. Descendants still living in West Philadelphia decided to formally close the graveyard in 1899. By then, the Rose Burying Ground was said to be the last private graveyard in Philadelphia. 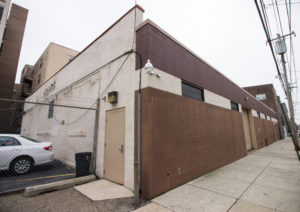 4046 Ludlow Street was built on the site of the old Rose family cemetery. The one-story building is now being used by the Police Athletic League of Philadelphia for the Tucker Center, a community center for kids. | Photo: Michael Bixler

As reported in the 1903 book, West Philadelphia Illustrated: Early History of West Philadelphia and Its Environs; Its People and Its Historical Points, a writer noted: “We saw a large enclosure surrounded by a picturesque stone wall and shaded by several tall, handsome trees, a beautiful spot if it were only kept in proper order… In spite of the numerous signs warning against trespassers, the enclosure has become a common dumping place.”

In 1904, a newspaper article reported that no bodies had been laid in the Rose Burying Ground in over 50 years and that it had become a neighborhood eyesore, overgrown with weeds and shrubbery. These words could be said about any number of cemeteries in Philadelphia today.

The Rose Burying Ground was sold in 1904 to attorney John C. Hinckley for $50 at sheriff’s sale. (The city had a lien on the propery for the installation of a sewer line.) Hinckley stated his intention to reinter the bodies in another cemetery and to erect a perpetual monument of some sort to the memory of the Rose family. Hinckley’s grand plans for honoring the Rose Burying Ground and its inhabitants never materialized.

Anecdotal evidence indicates that the bodies of both the Rose family cemetery and the African Friends to Harmony/African Baptist Church of Blockley cemetery were moved to Mount Moriah Cemetery in 1922, although it is hard to be certain.