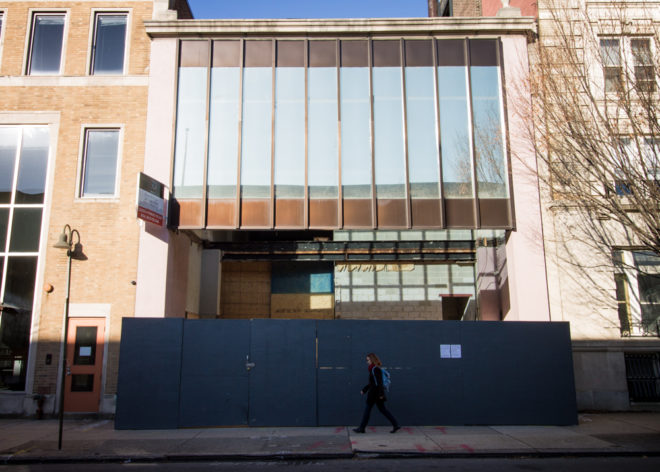 The Modernist façade at 2207 Chestnut Street was designed by famed architecture firm Stonorov & Haws in the Swinging Sixties, but the modest, two-story property has roots in the Roaring Twenties. It was originally built for a foreign car dealership, one of the few remaining auto showrooms in Center City. | Photo: Michael Bixler

Potential building sites in Center City are becoming more and more scarce as real estate development within the city’s core continues to march forward. This has caused an interesting influx of overbuilds on short Center City buildings. One such property, 2207 Chestnut Street, is an odd building. Its diminutive size and glassy, deadpan façade would lead one to believe that it was built between 1940 and 1970. Yet, upon further study, this deceptive, mid-century mask conceals a structure that is not only older than its perceived postwar origins, but was built in the 1920s for a car dealership.

In 1910, James Potter and Albert J. Diesinger were the successful leaders of the Fiat Motor Company of Pennsylvania. The city’s only distributor of Fiat automobiles operated at this time out of 325 North Broad Street, which was recently heavily renovated for the Louis Reed Center for Dance of the Pennsylvania Ballet. After the auto dealer began selling other types of foreign cars, a new headquarters and dealership would follow. Potter and Diesinger began eyeing properties near the newer automobile sales section of town developing along Market and Chestnut Streets east of the Schuylkill River. A series of lots were made available by the demolition of homes and industrial buildings for the widening of Chestnut Street in 1911. This accommodated the rise of commercial use in the neighborhood. 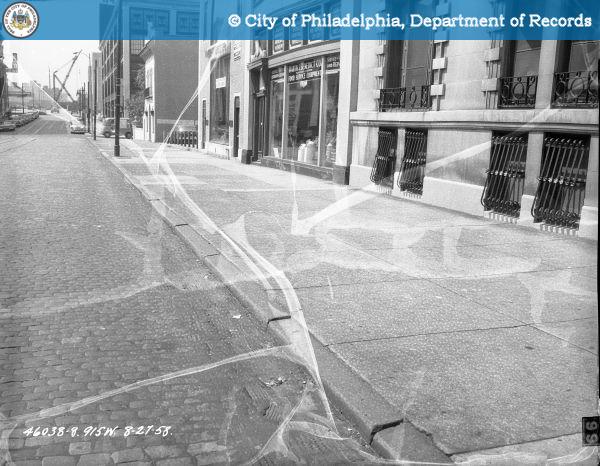 In the center of this photograph from 1958 one can see the original 1st floor exterior designed by Leroy B. Rothschild. | Image courtesy of PhillyHistory.org

The design of the dealership, by prolific Philadelphia architect Leroy Berman Rothschild, was two stories. The auto showroom on the first floor had 19-foot ceilings and a metal-framed show window façade. The second floor, where the company’s offices were housed, had floor-to-ceiling windows facing Chestnut Street. A surface parking lot along the side of the building at 2209 Chestnut Street was used to store and display vehicles. A large garage door on Ranstead Street was likely used for servicing and repairs.

Shortly after opening On Chestnut Street in 1921, the company was renamed the Potter-Diesinger Motor Company. At their new building they sold Fiats, Roamers, and Elgins. Their new venture lasted a year. In the middle of 1922, the business folded and all automotive stock was sold in a large liquidation sale.

The building was next occupied by Philadelphia Art Galleries, an auction house that specialized in Oriental rugs, textiles, and unclaimed baggage. They were subsequently replaced by the Philadelphia branch dealership of the Stutz Motor Company. 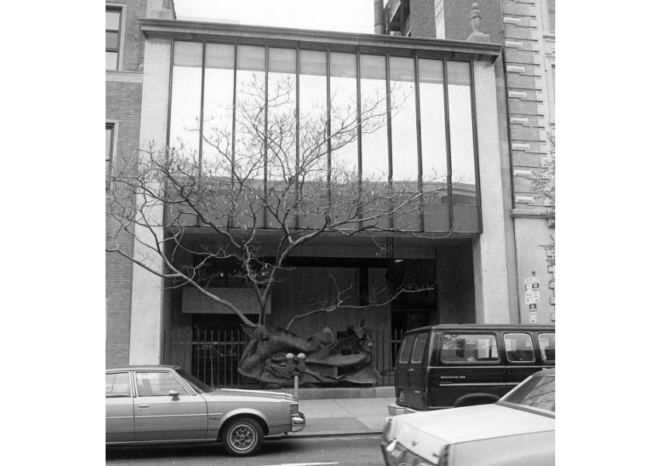 In the 1930s, the building held two different construction equipment companies, H.L. Kent, Inc. and Swift Equipment Corporation. In the 1940s, Beckman’s Furniture Store set up shop, followed by the Chrome Steel Furniture Company at the start of the 1950s. By this point, a mezzanine was installed on the first floor. From the 1950s into the 1960s the 2nd floor offices became the Midtown YWCA and the Doris E. Thomas School of Retailing. The school offered an intensive, two-year course that, in their own words, “covers the entire field of textiles, color and design, home furnishings, psychology, the principles of retailing, principles of advertising, retail personnel and typing.”

In the mid-1960s, the building was vacant and in for a big change. The famed architecture firm Stonorov & Haws bought the building and altered it under their own designs. The firm cut out a portion of the building’s first floor and mezzanine, creating a setback entrance behind a somewhat uninviting metal fence. A large metal sculpture, designed by Oskar Stonorov himself, decorated the center of the fence, along with a tree that was planted in a landscaping bed that ran along the fence. 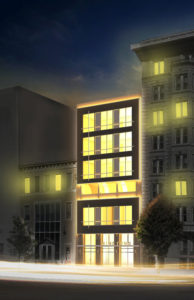 The next chapter of 2207 Chestnut Street will include a redesigned exterior and a four-story overbuild. | Source: Astoban Realty Group

Stonorov & Haws continued to use 2207 Chestnut Street until the start of the 1980s, well past Oskar Stonorov’s tragic death in a plane crash in 1970. The PTC Career Institute next door at 2209 Chestnut Street expanded into the property after the architecture firm sold the building. The trade school, which operated in five other cities besides Philadelphia, made national headlines in 1994 when its founders, Richard and Rimona Friedberg were busted for tax evasion and misappropriating federal funds. Money granted to the school by the government was funneled into exorbitant salaries for the founders and their family members. They also used the federal funds to renovate their homes. The Friedbergs were charged with fraud and their branches in Atlanta, Baltimore, Chicago, Newark and Washington were subject to a federal probe.

In the 1990s, law firm Blackburn & Michelman took possession of the small office building and thoroughly remodeled it. The sculpture and planter row was removed from the front of the building and other façade details were changed. The most recent occupant of the building was the Genealogical Society of Pennsylvania. The legacy Philadelphia non-profit, established in 1892, collects, stores, preserves, and provide access to the personal records of Pennsylvanians.

In 2016, real estate firm Astoban Investments acquired the property and began planning a complete reconstruction of the old Potter-Diesinger Auto Company headquarters with an overbuild on top of the original structure and a redesign of the façade. The newest version of the 97-year-old auto dealership, designed by Urban Space Development, will feature four residential units and ground floor retail.