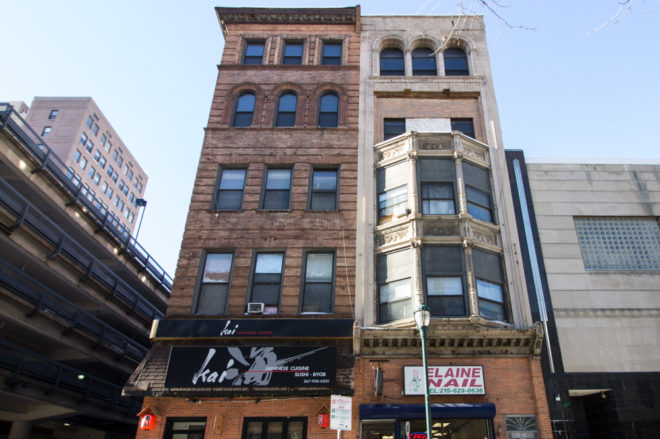 In 1896, Charles McCaul must have felt pretty confident. The Irish-born contractor had worked in the construction industry since the age of 13 and had owned a construction business in Philadelphia since 1875. His commissions included schools, industrial buildings, houses, and banks. His most notable projects were Reading Terminal, the Philadelphia Mint (now Community College of Philadelphia), the Land Title Building, Drexel Institute, and the U.S. Marine Corp Quartermaster’s Depot at Broad and Washington. Flush with funding, McCaul began developing his own real estate projects instead of explicitly building the commissions of others.

McCaul’s first project was a speculative retail building on 10th Street just below Market Street. The five story building was completed by 1896. The façade, with three stories of bay windows, three arched windows, and a massive cornice on top, was deceptively simple. Upon closer inspection, ornate details were to be found at all levels due to the intricate work of the Conkling-Armstrong Terra Cotta Company‘s contribution to the design of almost every exterior element. 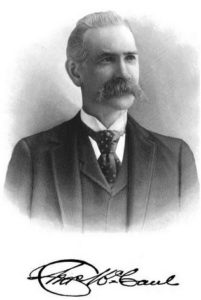 Although Nicetown’s Midvale Steel Company was to become the building’s first tenant, the business never made use of the building. However, plenty of other prominent companies did. After a brief period serving Charles A. McDonnell Silks, the building became known as the first official headquarters of the firm of Mayer & Englund. Founded only two years earlier by C.J. Mayer and A. H. Englund, the company was a national sales agent for manufacturers of railway materials and supplies. The business moved to the first floor of 10 South 10th Street in January 1897 and, by 1900, had expanded into all five floors and the basement. Mayer & Englund quickly became the go-to dealer for railway supplies and eventually moved to a larger, eight story building at 1020 Filbert Street (demolished) in 1902.

The Syracuse Paper & Pulp Company, which was already occupying the building next door, moved into 10 South 10th Street and remained there for the rest of the decade.

In the 1910s, 10 South 10th Street became home to the Van Horn & Son company, makers of theatrical costumes. They moved here soon after the death of founder Franklin M. Van Horn, who died while engaged in a heated divorce. The circumstances surrounding his death made national news when it was revealed that he left the bulk of his fortune to his mistress, Francesca Textor, and left his wife one dollar. Van Horn & Son went on to become a prominent Philadelphia company.

On August 1, 1919, Laurel Corset Shop opened at 10th South 10th Street to much fanfare. The store was founded by former Snellenburg’s employees. The shop first opened at 5921 Market Street (demolished) a few years earlier. The new location used all five floors of 10 South 10th Street and touted itself as the largest corset shop in the country in an advertising campaign that accompanied the grand opening. One year later, the shop downsized to just the first floor, but managed to stay operating for several more years.

In the 1920s, 10 South 10th Street was the home of the Philadelphia branch of the Mah-jongg Sales Company of America. Based in San Francisco, the company was a major importer of Mahjong sets to the United States. Mahjong, the Chinese tile-based game, become a fad in America after the 1920 publication of Rules of Mah-jongg, a rule book of the game that simplified it for American players. Mahjong sets imported and distributed by the Mah-jongg Sales Company of America are sought-after collector’s items today. 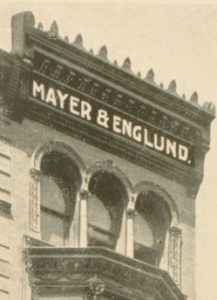 A photograph from 1898 showing the old cornice of 10 South 10th Street when it was the headquarters of Mayer & Englund. | Source: The Book of Its Bourse & Co-operating Bodies, Lippincott Press, 1899

After a series of owners and foreclosures in the 1930s and 40s, Samuel Abelson, who owned 12 South 10th Street and ran Jean’s Book Store there, took ownership of the building. A card shop on the first floor and a photo lab on the 2nd floor would go on to be the only occupants of the building for some time. The next owner of 10 and 12 South 10th Street, Jim Kenis, combined the two buildings on the first floors in the 1970s to accommodate dining space for D & D Restaurant. Kenis later installed apartments on the upper floors of both buildings.

Kenis’ family retained ownership of both 10 and 12 South 10th Streets into the beginning of the 21st century. Yong Lian Chen purchased both buildings in 2003 and renovated the interiors under the designs of local architect Sabrina Soong in 2004. The buildings were separated, the apartments remodeled, and 10 South 10th’s current retail tenant, Elaine Nails, moved in. The building was sold to its current owner, Urban Growth Property Trust, a subsidiary of parking operator Interpark out of Chicago, in 2005. The company went on a Philadelphia real estate shopping spree in the early 2000s, buying the entire south side of the 900 block of Chestnut Street, five Center City parking garages, and a large collection of smaller commercial properties. The company has sold off many of the properties over the years. 10 South 10th Street is the only property in the company’s current holdings that is not a parking lot or garage.

The 121-year-old building pales in comparison to other iconic Philadelphia buildings constructed by Charles McCaul, but it does have the distinction of being one of the only ones surviving to be initiated by the man himself. The cornice may be gone, one bay window might be missing, and the first floor has been altered beyond recognition, but the building still stands out after more than a century, a fact that would likely please McGaul greatly.