From Prints To Trivets, Art Imitates Life Of Manhole Covers

Think of the last time you traversed a city block be it by bus, bike, Uber, or foot. You probably passed over at least one manhole cover, a typically uneventful occurrence that most people largely ignore. Yet, these omnipresent fixtures are portals to a remarkable underground world. 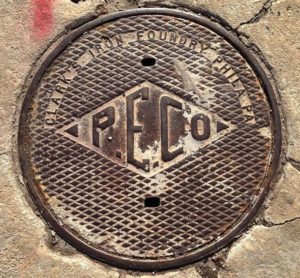 An old PECO manhole cover in Ludlow. The manufacturer, Clarks Iron Foundry, was located at 35th and Grays Ferry. The building is gone, but remanants of the old industrial site are still standing. | Photo: Michael Bixler

Lifting a manhole cover unveils a confluence that encompasses the city’s water and sewer evolution from wells to indoor plumbing and from privy pits to filtration plants. The pipes accessed through manholes traverse ancient streams like Dock Creek and Little Tacony Creek. Building the infrastructure was a mammoth municipal undertaking. In 1911, a city pamphlet touted that the sewerage system spanned 1,226 miles in length or equal to the distance between Philadelphia and New Orleans. The price tag: $57 million.

Underneath these manhole covers, water, telephone, and electrical lines surge with vital activity like intestines and arteries that keep nutrients and blood flowing within the human body.

Invisible and ignored by most, these subterranean systems are adored by a number artists, designers, urbanists, filmmakers, and Nortonists, lovers of sewer systems named in honor of Ed Norton, “The Honeymooners” character who worked in sewers.

Jason Lempieri is an architect, urbanist, adjunct professor, and lecturer at Philadelphia University, University of Pennsylvania, and University of the Arts. One of his projects is creating cork trivets using designs from manhole covers throughout the world. (Disclaimer: Jason Lempieri is a contributing writer of Hidden City Daily and his Philadelphia manhole cover trivets are sold in our online store, Hidden City Mercantile.)

Russ Muits is a graphic designer and art director from Franklinville, New Jersey. He became captivated by a manhole cover outside of his office in Seattle. The design and functionality soon had him down on his knees with paint, rollers, and paper. Muits prints manhole covers on canvas throughout the United States, including a series on Philadelphia. He also gives manhole cover tours in Seattle.

I spoke separately with Lempieri and Muits about their attraction to manhole covers and the public utility universe that lies beneath city streets.

Jonathan Schmalzbach: What drew you to manholes?

Jason Lempieri: I’ve been admiring them for over 20 years. I’m attracted for several reasons. It’s an interesting way to create urban branding. London has telephone booths and Paris has the Metro. Each city has its own manholes with their own history.

As an architect, I am often looking up and down. I’m also interested in the vernacular angle of manhole covers.

Manhole covers really have no designer, so there’s a bit of anonymity to them. They are functional, pleasant, and speak to place. 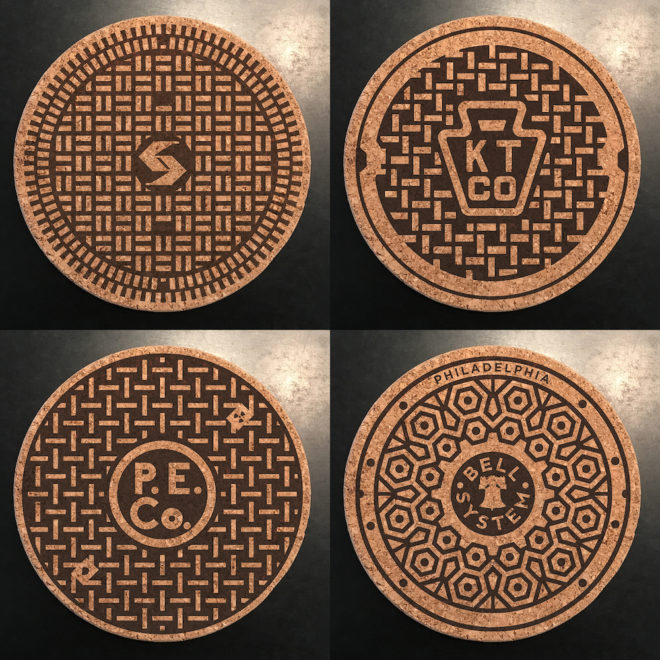 JS: What is your process for creating the trivets?

JL: I’m also a product designer, which is a competitive field. From my travels, I took a lot images of manhole covers that I wanted to do something with. I’m interested in doing things that are not being done. I had seen manhole images on welcome mats, cuff links, and t-shirts.

I like using new technologies in a more refined way to do things that aren’t being done. So, I hand-drew manhole designs onto wood which was then laser etched. This allowed for phenomenal detail and gave the wooden trivets a cast iron look. Then cork is put on the back. I put a couple up for sale on eBay and they disappeared quickly. Now I have 10 different sets from cities around the world.

JS: Who buys your creations?

JL: There are different types of folks. There is the urbanist. There are those who have travelled to the cities and want a remembrance. They’ve been used as anniversary gifts. It takes people back to their visit. It’s like tasting local food. That is the power of an urban brand.

JS: What’s next for you?

JL: There is a bike rack I designed on Rittenhouse Square. I would love the opportunity to design more functional structures like bus stops and, of course, manhole covers.

Jonathan Schmalzbach: You refer to manhole covers as “antique and iconic.” What does that mean to you?

Russ Muits: Foundries that cast the manhole covers rarely signed the work, yet they are examples of beautiful art and manufacturing. Each city’s manholes reflect its history and values. For example, I did a piece on Passyunk Avenue in South Philly that depicts a Native American chief in a headdress. I’ve done a rubbing in New Orleans that is incredibly ornate and features a crescent moon for the Crescent City. Phoenixville, PA has a phoenix rising from the ashes on some manhole covers. 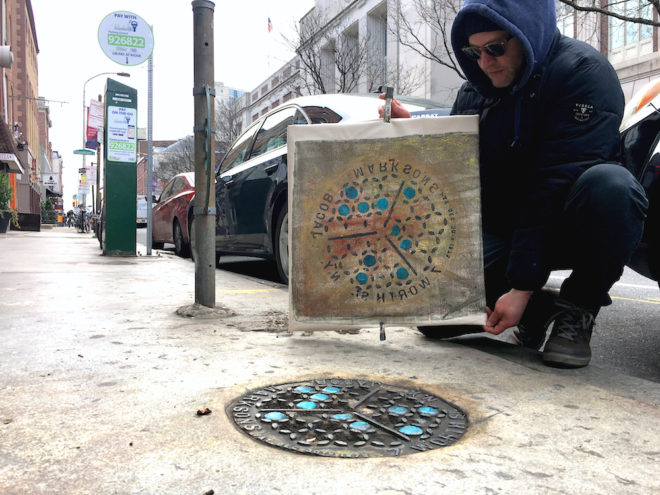 JS: How do you choose the colors for your prints?

JS: What do you love about this work?

RM: It’s the thrill of discovering these overlooked objects, cataloging American industry, raising awareness to our infrastructure, and showing appreciation for craftsmanship of the past.

JS: Two of Philadelphia largest foundries that manufactured manhole covers were the Scullin and Clark foundries. The Scullin factory, founded in 1869, was located at American and Cambria Streets and operated for about 100 years. The Clark Foundry, which opened in 1908, once employed 6000 workers. What do you know about either of those?

RM: I made a print for Scullin descendants from a manhole cover done at 13th and Locust. I read that the father of Richard James who invented the Slinky designed patterns for Scullin’s manhole covers.

I’ve also just been in touch with the great-granddaughter of the Clark Foundry who asked for a canvas. I found a nice one dated 1921 near the Trestle Inn at 11th and Callowhill. I sent her a print, but she said it was from her great-uncle’s foundry, not her great-grandfather, the W.H. Clark foundry.

The descendants the founders of the Berry Foundry in Sacramento contacted me to do a canvas for them honoring their great grandfather. The canvas now hangs at the family estate in Sacramento. 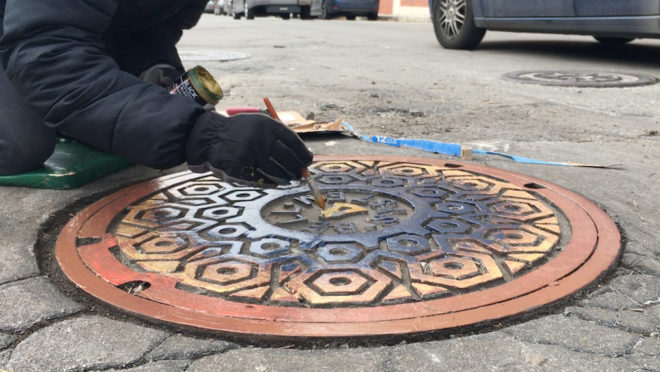 JS: You have created over 400 full-sized color prints on canvas from more than 70 cities across the country. You mentioned that you often do your work at night between midnight and 5 a.m. when there is less traffic to worry about. Can you share some stories you’ve had while creating prints?

RM: In Boston, a policeman showed up and kind of menacingly asked what I was doing. When I told him, he started directing traffic around me so I could finish the work.

I saw an image online of a great drain cover at MIT where some students changed the “d” in drain to a “b” to make the word brain. Despite having campus police help me look for that cover we never did find it after many hours of looking.

One time I was in Louisville, Kentucky looking for four historic coal covers that I read about. For six hours I drove around the city with my fiancée and her mother. No luck. Then, just when we were about to leave town, I took one last look along Main Street and parked right next to the Steel Museum. I got out of the car and the covers were all right there.

In Seattle, I met a man who was commissioned in 1979 to create a cover carved from native wood. The governor at the time was Dixy Lee Ray, the first female governor of Washington who said that the term “manhole cover” was too sexist and insisted it be called a hatch cover.

Recently, I got a ride from a Lyft driver in Seattle who did manhole designs for Seattle’s Olympic Foundry where he carved the molds used to cast covers. I had literally pulled a print from one of his covers the day before in Portland, Oregon! 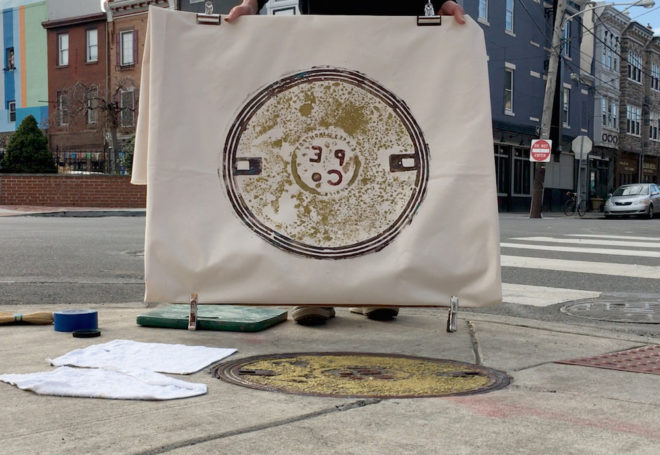 A PECO manhole design is immortalized in a print. | Photo courtesy for Russ Muits.

JS: You’ve written that, “The process of researching and discovering designs in different cities while reinterpreting each through colored ink on canvas and textiles has provided a personal interaction with art and public utilities, and most importantly, connecting people to their neighborhood and community.” Can you give some specific examples of how your work has connected people to their community?

RM: A couple of summers ago I was hosting an art walk in Chicago when a woman came by who really liked the work. It turns out she was a teacher in a suburb about an hour away. She shared the work I was doing with two of her students who were struggling and disinterested in school. The students wound up doing more research about infrastructure, made their own prints, then sent me a video of them creating the prints.

JS: What’s next for you?

RM: Many communities from around the country have asked me to come out and do prints or get advice on how to do them. I’d like to be able to permanently paint covers to bring attention to them. I just got a verbal commitment from the City of Denver to do a project this summer. I plan to conduct a couple of workshops then paint some covers that will become part of a permanent installation. 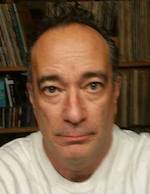 Jonathan Schmalzbach Jonathan Schmalzbach is the co-creator and primary author for the website USHistory.org, published by the Independence Hall Association, where he was the longtime Executive Director and led Philadelphia walking tours for the group. He is a longtime curriculum and course developer for the K-12 marketplace. The job most people like best is as crossword puzzle creator and columnist for such publications as the New York Times and Games Magazine. He has lived in South Philadelphia, Northern Liberties, and Mt. Airy where he was a co-owner of the restaurant Hamlet for several years.