The Marvelous Multiple Occupations Of The Midtown II 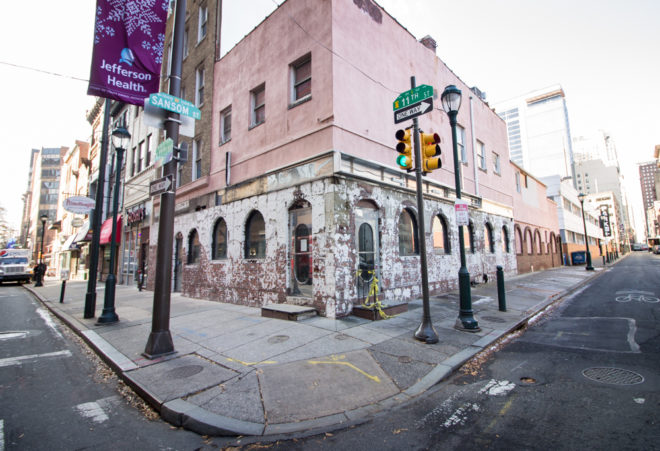 Philly social media has been buzzing with chatter recently about the construction going on at the former Midtown II at the southwest corner of 11th and Sansom Streets. So far, plans for redeveloping the old diner remain under wraps. Traces of the building’s history were uncovered last month when the old façade was removed revealing old signage for LeMars Lunch along 11th Street. As exciting as the ghost sign is, it is only a small taste of the building’s myriad of tenants over the past 140 years, a list that includes a lawman, a lunch counter, an oculist, and a philandering Canadian crook.

The exact construction date of 124 South 11th is unclear, but it was likely built in the 1850s as a large 4-story, 6,700 square foot home for James Bain, former deputy sheriff of Philadelphia. Bain purchased the lot in 1854. His sons Henry and James Jr. are listed as living in the building in the 1860s. Their mother, who was a milliner i.e. hat maker, may have had a store at the location as well. Bain’s descendants managed to hold on to the building up until 1920.

As early as 1866, the first floor was in use as a retail venue. Isaac Dixon’s jewelry store was there from 1866 until the beginning of the 20th century. Dixon was one of the most well-known jewelers in the region. He founded his business in 1843. By 1888 Dixon was lauded as the oldest and most experienced jeweler in the city with some of the best window displays and interior decorations. Dixon was also known as one of the best appraisers of precious stones. In 1890, the addresses on 11th Street changed to what they are today, making the Bain residence 124 South 11th Street.

At the start of the 20th century, the former single-family home with retail ground floor became a 14-unit halfway house with E.K. McGill’s oculist office in the retail space. In 1908, oculist G.W. Hales took over and stuck around for several years, opening an osteopathic medical practice in the building next door that would later become the 2-story diner section we know today.

Around 1908, a descendant of James Bain upgraded the halfway house into a 14-unit apartment building and called it Wayne Apartments, presumably to get a larger profit when the building was listed for sale shortly thereafter. It took roughly six years to sell. James Arnold purchased the property in 1920 and opened Hotel Wayne in 1922, which would remain the name of the building until 1948. It was probably Wayne that altered the appearance of the old Bain house to its current appearance. The windows seem to in the same locations but a small addition was added to the roof with some medallions on the facade.

The building’s retail space became the first branch store of the Ambrose Diehl Electric Company out of Uniontown, Pennsylvania. The store specialized in early household appliances, mostly washing machines. Their first store in Uniontown was simply a wholesale mart selling extra items from their factory. The Philadelphia location was their first retail store. The manager, Charles Dudley, was a former Canadian Army soldier who deserted his post and started a new life and family in Philadelphia. Only a few months after the store opened, Dudley met a young woman working at one of the shops around the corner and fell in love with her. He stole $2,000 from the store’s funds ($29,364 in today’s dollars) and ran away with the young woman to Chicago, telling his wife and his boss that he was visiting the company’s home office in Uniontown. Dudley was arrested in Chicago based on a tip his wife provided to police.

Some time in the mid 1930s, the corner building at 122 South 11th Street was reduced from 4 stories to two. The building did not have many occupants of note other than a company called I.B. Seeley, manufacturer of Seeley’s New Spermatic Shield. The “shield” was a strap-on device that one placed over an inguinal hernia and would supposedly cure it. Seeley occupied the building during the first two decades of the 20th century. 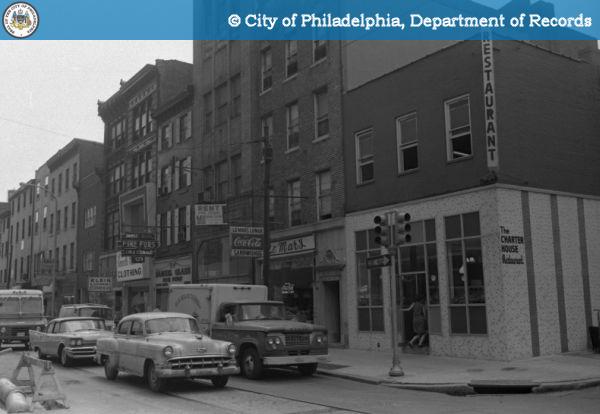 1949 was a big year for the old Bain home. J.P. Palla purchased The Hotel Wayne, which closed a year earlier, and renovated the property for the 22-room Radlee Hotel. The first floor received its first restaurant operator, Morris Plaskow, who already owned well-known establishments at 8th and Walnut and the Oppenheim & Collins store on Chestnut Street, which was recently restored by Brickstone Realty and now called The Collins. Plaskow was the only restaurant owner in town contracted by the Quaker City Ice Cream Company to sell their dessert in the first year they offered single-serving pints.

By this point, many “men’s lunchtime eateries” were springing up all over the surrounding neighborhood in former shops and showroom spaces.

In September 1949, a massive fire ravaged the 1100 block of Sansom Street. The blaze started at a former old cigar factory that was being demolished at 1120 Sansom Street. Being one of the taller buildings in the surrounding block, the embers and smoke damaged buildings in all directions. 17 guests had to be evacuated from the Radlee Hotel. The old cigar factory collapsed, heavily damaging the rear of Keith’s Theater across the street and enveloping Tilles Restaurant at 1110 Sansom Street.

The corner building, being used as a gift shop at the southwest corner of 11th and Sansom Street, burned but survived–it was waterlogged by the fire department. 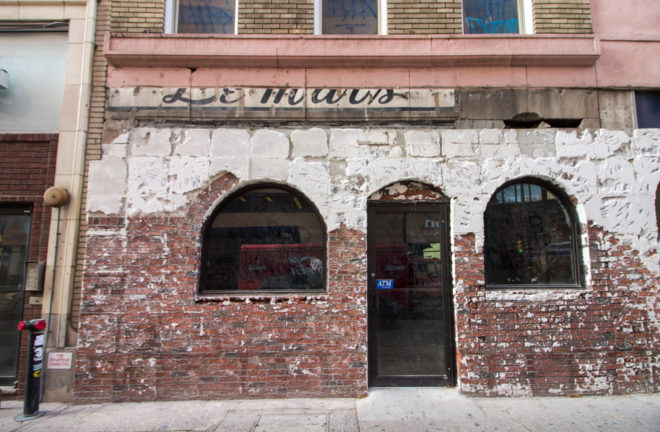 Half of an old sign for Le Mars Lunch peers out onto 11th Street. | Photo: Michael Bixler

In 1985, Greek-born Gus Hionas purchased both 122 and 124 South 11th Street in two separate transactions totaling $500,000. The old LeMars and Charter House spaces were combined and he opened the second location of Midtown Restaurant, a diner he opened with his brother on the 700 block of Sansom Street in 1973. The Midtown chain of diners found success by filling a niche that few other establishments in Philly could—around the clock restaurant service. At the time, very few businesses stayed open at night, let alone all night. Midtown II became a refuge for overnight partiers, hospital workers, and neighborhood locals.

After over three decades of continuous service, Hionas filed for Chapter 11 bankruptcy protection after leveraging the famous diner to pay for another establishment he owned in New Jersey that didn’t make it. When the Midtown II closed in June 2016, Hionas blamed an Inquirer article that reported health code violations at the restaurant that, Hionas says, reduced business by 40% in the months before shutting the doors for good.

122 and 124 South 11th Street were put up for auction and purchased for $3.85 million by an LLC with an address consistent with a family that owns several Greek and Italian restaurants in the region. Currently, a permit for demolition of non-load-bearing construction is active for the property with no other plans submitted. As a result of recent demolition work, the old sign for LeMars Lunch has been re-exposed.