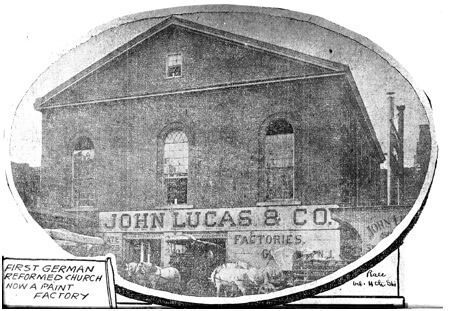 A photo of First Reformed Church when it was a paint warehouse from the May 27, 1900 issue of The Philadelphia Times. | Source: Newspapers.com

The Old First Reformed Church-United Church of Christ at Fourth and Race Streets—where a live-animal crèche is on display during the Christmas season every year since 1973—has been the center of several colorful episodes over the past three centuries. In addition to the church congregation’s nearly 300 years on the site, the current church building has lived a peculiar life. It was built in 1837 as a church, then used as a paint warehouse for 80 years before becoming a church again for the same congregation. Perhaps the most interesting story of all involves the national controversy over the secret union between owner of the paint warehouse and his second wife.

Painted Into a Corner

The congregation of Old First Reformed built a third church at Fourth and Race Street to meet the growing needs of their fold and to reduce the level of traffic noise heard from their former location on Race Street. The third church was dedicated on March 4, 1837.

The John Lucas Paint Company was an early pioneer in the American paint and varnish industry. Established in 1848 at 33 North Front Street (a spot now covered by I-95), the firm marketed Lucas Liquid Paint, a ready-mix paint that became very popular. 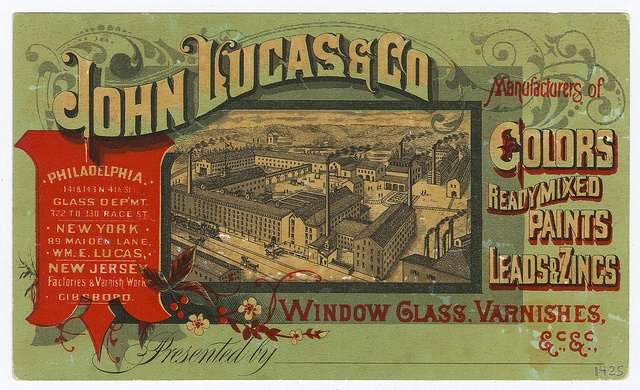 The founder of the firm was industrialist John Lucas, nicknamed the “Paint King.” After his wife died in the 1890s, he threw himself into running the business with renewed vigor, despite being in his seventies. Lucas also became a philanthropist. When he died in 1901 Lucas left his children an estate valued at between $3 and $12 million (accounts varied).

Upon his death, the heirs of Lucas’ estate were astonished to learn that he secretly had another wife. Mary Comey, a country girl from Ireland who had been Lucas’ housekeeper for a brief period, claimed that she was the paint maker’s widow and sued the Lucas estate in Orphan’s Court for dower rights. Testimony at the 1903 trial indicated that she had worked for Lucas as a maid at his mansion at 2549 North 18th Street after securing the job through an employment agency. But she worked for Lucas for only two months before suddenly leaving for reasons unknown.

Mary Comey rich Irish brogue had apparently captivated John Lucas. She immediately moved to a home on the same block as Lucas and the couple soon shacked up. He rebuilt her home into a stately residence. Comey was soon wearing fashionable gowns and diamond rings and had servants and carriages. She even opened accounts at large downtown stores under the name “Mrs. John Lucas.” She declared at the trial that they began living together as husband and wife in 1897 and they traveled as such to Atlantic City every year. Evidence showed that Lucas, who died in Atlantic City with Comey at his side, always presented her as his wife on trips. Inexplicably, Lucas’ children did not notice that they had a stepmother until after their father’s death. 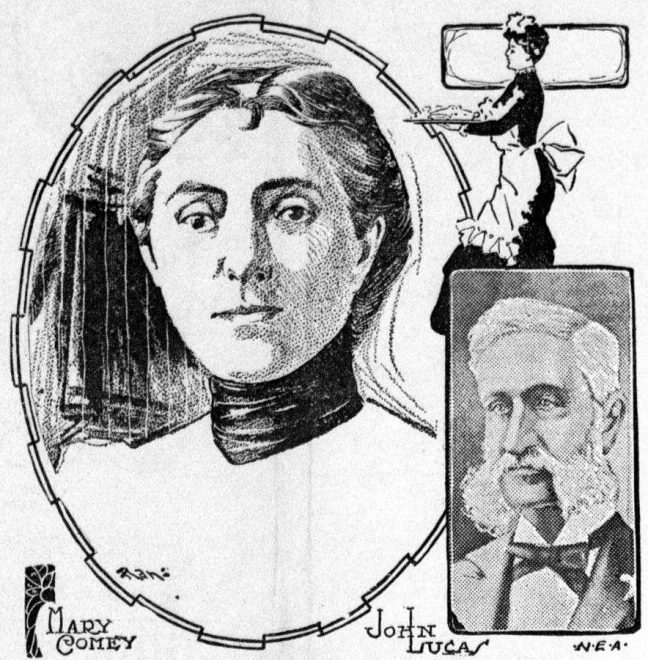 A drawing of Mary and John, one that appeared in countless newspapers around 1903-04. | Source: Wikimedia Commons

Investigators found a marriage record, but the case apparently hinged on common law marriage principles. Photographs of hotel registries of places the two stayed were introduced into evidence, making the affair a racy story in the Philadelphia press.

The trial was big and was covered in every major newspaper across the country. The New York Times reprinted a letter that Lucas wrote to Comey that showed his conflicted—yet ardent—emotions toward her. Lucas wrote in the letter, “It is strange that you should at any time doubt the truth of my affection for you and abandon me, as you did on the fourth, leaving me alone and disconsolate. I forgive, but shall never forget, and confidence once lost is hard to regain. I wrote to ask you to come down again, and if I should engage the room, at the Waverly [resort hotel] again for the first of this month. To this you did not reply. Why indulge in insulting one who is ever true, making me feel more and more unhappy? Hastily, with undying love, J.”

The family ultimately settled in late 1903 for $1,000,000. Perhaps this was to save the Lucas children from further embarrassment. If a judgement during the trial had been reached a common law marriage between Comey and Lucas would have been judicially established. Whatever the case, the settlement stipulated that Mary Comey was, indeed, John Lucas’ wife and that she was entitled to a third of his estate. Comey immediately became one of the richest women in Philadelphia. Referred to as “Mrs. John Lucas, widow of the Paint King” around town, she announced to friends that she intended to return to Ireland with her money. There, the record goes silent with regard to the Irish maid who made good in America. 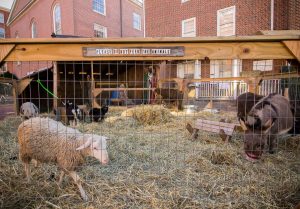 Lucas Paint Company was known as John Lucas & Company Tinted Gloss Paint well into the 20th century and operated independently until 1930 when it was acquired by Sherwin-Williams. The paint conglomerate retained the Fourth and Race location until 1967, when Old First Reformed, faced with declining membership in its West Philadelphia location, actually bought back its former church building from the Redevelopment Authority of Philadelphia.

Members of Old First Reformed proceeded to restore the worn and shabby structure to its 1837 appearance. The building along Race Street was rededicated in 1969, and the congregation has been prosperous ever since. Every December the congregation celebrates their good fortune with the city with a live animal nativity scene. The endearing holiday tradition turns 44 this year.