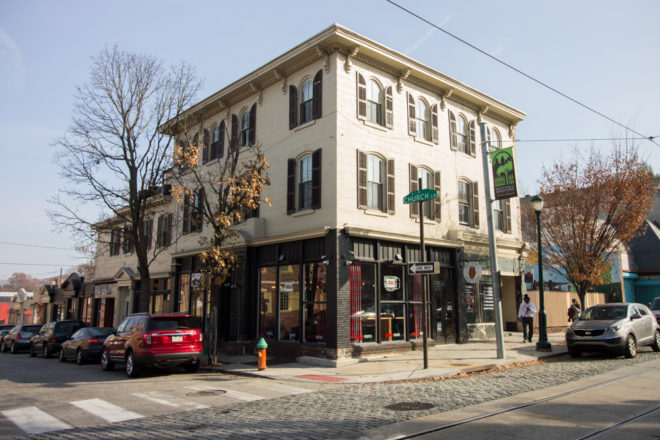 Last Tuesday, Marc Lamont Hill, political commentator, writer, and professor of media studies and urban education at Temple University, held a grand opening for his new bookstore and coffee shop at 5445 Germantown Avenue, named after his influential Uncle Bobbie. In the eight days since the shop opened Uncle Bobbie’s Coffee and Books has quickly become a community destination buzzing with coffee, conversation, and creative programming. On a recent Monday morning a lively crowd lined the bar and spilled out from the tables inside the historic storefront at the corner of Church Street and Germantown Avenue. Nearly every passerby stopped in for either a quick cup to go or a seat among friends and neighbors. Hill opened the shop to recreate the environment he found in his uncle’s house growing up, one Hill described as being full of “critical reading, critical discussion, good food, family, and home.” “When you went to Uncle Bobbie’s house, you’d get all the conversation you ever wanted,” said Hill.

Bobbie Lee Hill grew up in Wilkes County, Georgia during the first half of the 20th century. As an African American in the Deep South, the racial injustice he experienced and witnessed left a profound impression on his worldview. He was especially concerned with the lack of access to education for African Americans. Self-taught, Bobbie Hill’s formal education did not go beyond primary school. 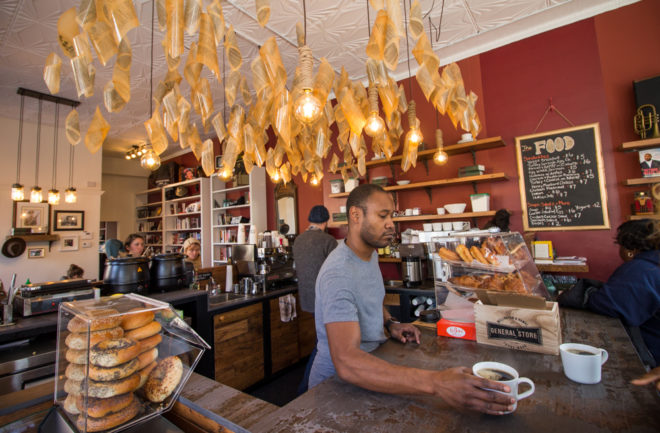 Years later, after he moved up north, Bobbie Hill introduced his young nephew to what Marc Lamont Hill described as “a Black literary tradition.” His North Philadelphia home, just a block from his nephew’s current office at Temple University, was “a monument to a certain kind of expression and investment in Black people, Black ideas, and, ultimately, Black books.” “That’s why I fell in love with Black books and Black authors,” said Hill. “My parents made me a reader, but Uncle Bobbie made me a reader of Black things, a critical reader.”

This is why it was important to Hill to open a Black bookstore, which he describes as a bookstore that is not only Black-owned, but also one that carries books and ideas relevant to Black culture and tradition. There used to be hundreds of such bookstores nationwide. Today, the number of Black-owned bookstores in America has fallen to just 54.

“So I said, why not make it 55? Why not turn it back the other way?” Hill explained. 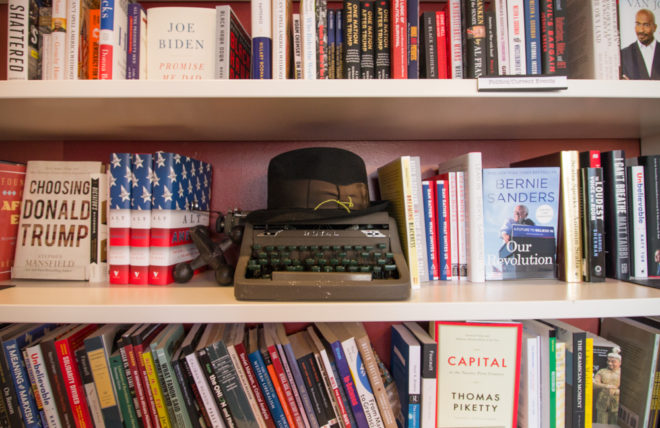 With Uncle Bobbie’s, Marc Lamont Hill sought to honor the memory of his uncle, carry on the fading tradition of Black-owned bookstores and establish a hub for community-driven conversation in the heart of historic Germantown. | Photo: Michael Bixler

After returning to Philadelphia last year to live and teach full-time, Hill decided that he was ready to realize his vision. The building he chose for the store was constructed in 1930. Rather than renovate the interior and create a modern space, it was important to Hill to restore what was already there, keeping with the architectural spirit of the surrounding Germantown Historic District.

“We’re committed to maintaining the integrity of the building, to make it in line with what Germantown is and what Germantown could be: inclusive, communal, and progressive,” said Hill.

With the help of the project’s designer, Kia Weatherspoon, president of the firm, Determined by Design, Hill and his crew restored the storefront’s original tin ceilings, took the metal gates off of the doors, and removed the security bars from the windows.

“We said, let’s take all that away so you can see, not just the beauty of this building, but the beauty of the whole environment here: the park, the historic church,” said Hill. “It’s a beautiful block and it’s representative of Germantown in so many ways.” 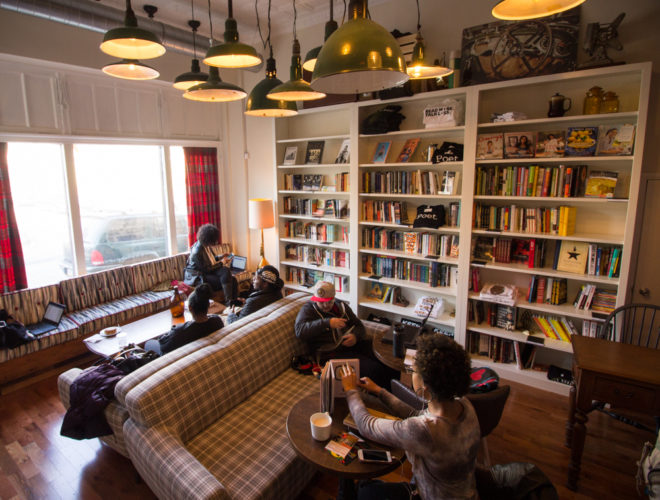 The back room at Uncle Bobbie’s is more like a community living room than a bookstore cafe. The shop’s renovated interior was designed by Kia Weatherspoon, president of Determined by Design. | Photo: Michael Bixler

Becoming an asset to the existing community is the overarching theme of Uncle Bobbie’s. Hill maintains that he didn’t start the project simply to sell books. He believes that the book-reading public is looking for something more than an algorithm to suggest which books they might want to read.

“They want to read and engage with other people who are like-minded or different,” he said. “They want a diversity of ideas.”

Hill has several event series planned for Uncle Bobbie’s including author readings and film screenings accompanied by critical discussions. The first film screening on December 1 was a viewing of the new John Coltrane documentary, Chasing Trane, followed by a talk-back with Dr. Guthrie Ramsey, a composer and professor of music at the University of Pennsylvania.