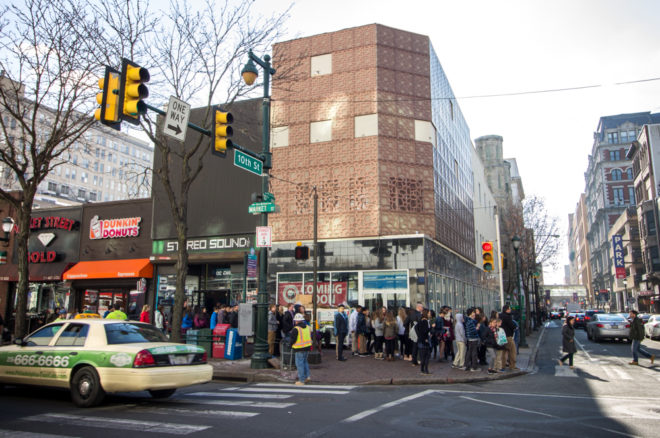 Chaos reigns with construction and change at 10th and Market Street. After being vacant for nearly three years, this high profile corner will soon ignite rapidly redeveloping East Market with… a Panda Express. | Photo: Michael Bixler

After decades of decline, East Market Street is finally experiencing the economic revival it rightly deserves. In addition to the reengineering of The Gallery and the construction of the new, mixed-use East Market ensemble on the old site of Girard Square, a much smaller redevelopment has been taking place on the southeast corner of 10th and Market. The former Mallas Building, a largely ignored slice of bustling Market Street, has been through several reconfigurations since it was built, most notably in the number of façade redesigns.

The building was constructed in the early 19th century as a three-and-half-story retail building with a pitched roof. Lots of different businesses came and went in the early years, but nothing of note really took hold until 1880 when Edward H. Parry moved his shoe store there.

From 1880 to 1906, Parry’s store dominated the building. Parry was a well known hat maker. The Bucks County native was held in high regard for his service during the Civil War after which he opened a hat store at 942 Market Street. His hats were known for appearing high-end, but only retailing for $2 and $3.

In 1906, Parry moved to 928 Chestnut Street and the façade of the building at 10th and Market was remodeled for the first time. The pitched roof was removed, a cornice was added, and decorative lintels were installed over the windows. A decade earlier, buildings at 3, 5, and 7 South 10th Street were combined with the building, an extension that stretched back to Boyer Place (now DeGray Street). 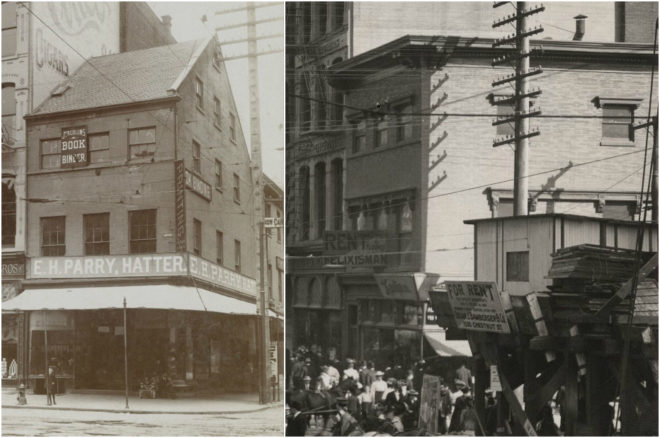 At the dawn of the 20th century, the Alvah Bushnell Company moved in. Folders, portfolios, file materials, and other office supplies for the legal industry were sold there. The company’s products were famous for being made of “paperoid”, sometimes called “red rope” today, a thin, sturdy, red-hued paper. The company is still based in Philadelphia and is owned by the sixth generation of Bushnells.

Between 1918 and 1940, the offices of the Philadelphia Badge Company occupied the third floor. The company manufactured police badges, brass employee id fobs, and small, metal novelties, but are most famous for the pin-backed buttons they made. Their political and cartoon character buttons are prized collector’s items to this day.

In 1917, the retail space on the first floor was subject to the nationwide expansion of United Cigar Stores. The chain was founded in 1901 and was the retail face of the American Tobacco Company, which was controlled by a trust of numerous tobacco companies called the Consolidated Tobacco Company. While initially just a typical cigar store, United Cigar Stores began acquiring trademarks to a number of different brands of coffees, milks, spices, pet foods, soaps, and other products. The only brand names they controlled that are recognizable today are Wrigley’s Gum and Thermos. The stores also sold items like furniture, silverware, jewelry, stationery supplies, watches, toys, clocks, and housewares.

In the first two decades of the 20th century, the company opened stores all over the country at a rapid pace and had its own real estate company to handle all the property acquisitions and construction. At its height, the chain had over 3,000 locations.

When United Cigar Stores moved into 942 Market in 1917 it was the company’s 714th location and known as the smallest store in the chain’s portfolio. The 1929 crash hit United Cigar Stores pretty hard, causing them to close over two-thirds of their locations.

In 1941, the building was purchased by dentist Dr. Julius L. Mallas. He commissioned local architect Israel Demchick to redesign the building’s façade with a distinctive and Modern look. Demchick was a prolific architect in the Philadelphia region and was active for over 50 years. His early designs were fairly traditional (like the houses and apartment building on the 4900 block of Pine Street). His work in the 1940s, 1950s, and 1960s was as Modernist as it gets. The most recognizable Demchick commissions from this era that still stand are the Leon Levy Medical Surgical Building at Einstein Medical Center, the Marian Anderson Recreation Center, and Blockley Hall at UPenn. He was also an associate architect for the Mann Center. If you’re a big fan of Demchick’s Modernist work, a large house he designed for a doctor in the Oak Lane Manor section of North Philly is currently listed for sale.

At 942 Market Street, Demchick’s reconfiguration chamfered the corner of the building on the 2nd and 3rd floors, cut out the space between some of the windows, and installed glass blocks to create a ribbon window effect. The Market Street façade and part of the 10th Street face were dressed in glass tiles with horizontal steel strips between each row. Part of the third floor was cut back to create a terrace with a rounded setback. “Mallas Building” was emblazoned on the Market Street exterior between the 2nd and 3rd floors.

The storefront window at ground level was chamfered even further back than on the upper floors and a single column held up the corner. Black granite tiles were placed on the façade. Large signs for the retail tenant, Dial Shoes, were added.

Once complete, the 2nd and 3rd floor of the building would serve as Dr.Mallas’ office for 14 years. The upper floors of 942 Market were no stranger to dentistry. The group Eastern Painless Dentists occupied the building throughout the 1920s and 30s. After Mallas moved out in 1955 another dentist took his place.

By the 1970s, big changes were happening on Market Street across from the Mallas Building. The new Gimbels and Gallery at Market East were built, followed by Gallery II and the Center City Commuter Connection Tunnel in the 1980s. During this time the first floor was occupied by a drug store called Health Fair Discount and the 2nd floor was an adult book store that featured male peep shows. The first store was called Adult Book Barn, then changed names to Wild West Book Store. Its last iteration, Book Bin East, managed to stay on the 2nd floor of 942 Market Street into the mid 1990s. 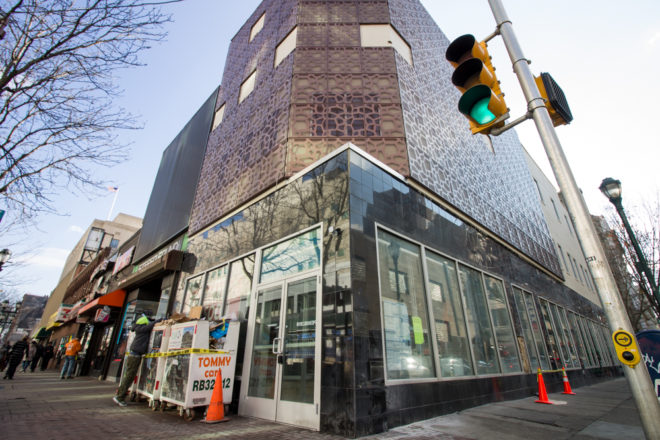 In 1995, the building became home to a McDonald’s location, #14220 in the franchise. Small adjustments were made to the exterior. Coincidentally, another building that received a Modern retail façade redesign by Israel Demchick, at 5219 Frankford Avenue, also became a McDonald’s.

In 2000, the McDonald’s Corporation planned to completely replace the exterior of the building with a large, two-story front window and metal wall panels under the designs of local firm SPG Architects. In addition, seasonal planters were to be installed along the facade and a large sculptural sign depicting a burger, fries, and drink would project out from the corner. The restaurant itself would be expanded up to the second floor. The corporation even went as far as getting a bill passed in City Council for sidewalk encroachments and had the Zoning Board of Adjustments, Art Commission, and Board of Building Standards approve the project. For reasons unknown, the redesign never happened.

The 10th and Market McDonald’s location became notorious as one of the worse-reviewed locations on Yelp. In 2015, the location closed. After roughly three years of vacancy, 942 Market would soon become a Panda Express. The building is currently preparing for its new tenant with a new façade screen and a toothy, tiled grin.