Members of the Mayor Kenney’s Historic Preservation Task Force assembled at 1515 Arch Street this morning for their fourth official meeting. The agenda consisted of an update on the status of the Task Force’s subcommittees, a review of the working draft of a report on the current status of historic preservation in Philadelphia, and time for public comment.

Most of the group’s subcommittees (Surveying Historic Resources, Incentivizing Preservation, Regulating Historic Preservation Outcomes, and Outreach and Education) have concluded their initial assessments and are awaiting input from the National Trust for Historic Preservation on specifics regarding best practices in peer cities before moving forward and proposing recommendations. Representatives from the Trust are expected to report back to the subcommittees in December. Laura Spina, director of the Planning Division of the Philadelphia City Planning Commission, speaking for the Education and Outreach subcommittee, pointed out that more information has been added to the group’s website, including a “Resources” tab where users can find information on legal materials, historic preservation reports, and student theses on related topics. The subcommittee plans to continue to add material to the site for public use.

Dominique Hawkins, partner and managing principal of Preservation Design Partnership, LLC., moderated the meeting. She noted that public feedback regarding the October 19 meeting at Jefferson University was generally positive and concluded that the next neighborhood meeting will follow the same format where public attendees may approach different subcommittees and ask direct questions.

The group moved on to review a draft of the Task Force’s first deliverable: a report on the current state of preservation in Philadelphia due in December. The draft outline was compiled based on the Task Force’s discussions and findings thus far. Hawkins noted that this initial report is not intended to provide solutions or answers, but to simply serve as a snapshot of the current state of preservation in the city. 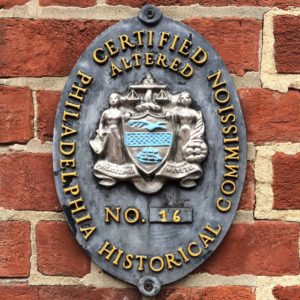 A Philadelphia Historical Commission plaque on a home in Rittenhouse Square denoting placement on the local register of historic places. | Photo: Michael Bixler

Although the members generally appeared in consensus about the overall sections represented within the outline (which includes the current state of regulations and outcomes, surveys and designation of properties and districts, incentives, and Historical Commission capacity) concerns were aired regarding nuances of language, tone, and omission.

Matt McClure, zoning and land use attorney at Ballard Spahr, found faults with the tone of a particular line stating that a “lack of information forces historic preservationists to run in to stop the loss of a historic asset at the last moment.” He argued that the tone fuels a sense of division between preservationists and developers. Patrick Grossi, director of advocacy at the Preservation Alliance for Greater Philadelphia, disagreed stating that he didn’t feel that the tone was negative, but simply spoke to the current absence of preservation tools in the city. A back-and-forth of input supporting both sides concluded with Leonidas Addimando, a managing partner of Alterra Property Group, LLC, asserting that the document really isn’t explicit about the conflict between property rights and protecting historic fabric. Members agreed that this is not a uniquely Philadelphian issue, though it has been exacerbated by the lack of regulation thus far and the current real estate market boom.

Task Force members agreed that identifying a solution to the bottleneck in designating historic districts is important. John Farnham, executive director of the Philadelphia Historical Commission, clarified that currently five district nominations submitted over the course of the past decade have been “tabled,” including French Village, Cast Iron Subway Entrances, Washington Square West, Wayne Junction, and Jewelers’ Row. He said that the Overbrook Farms nomination remains “under consideration.” David Hollenberg, university architect at the University of Pennsylvania, pointed that the word “districts” was omitted from the list of strong features listed the Philadelphia Historic Preservation Ordinance, noting that the ability to designate districts was seen as a major power for the City at the time the ordinance was enacted in 1955, as well as the ability to designate properties without owner consent, which was also not listed in the report’s outline.

The final discussion revolved around the topic of “tiered” designation systems, which essentially allow for historic properties to be regulated to varying degrees. The Task Force agreed that such a system was an important tool to be considered moving forward.

The Task Force’s next meeting will be held on January 18 at 6:30PM at the Enterprise Center at 4845 Market Street.