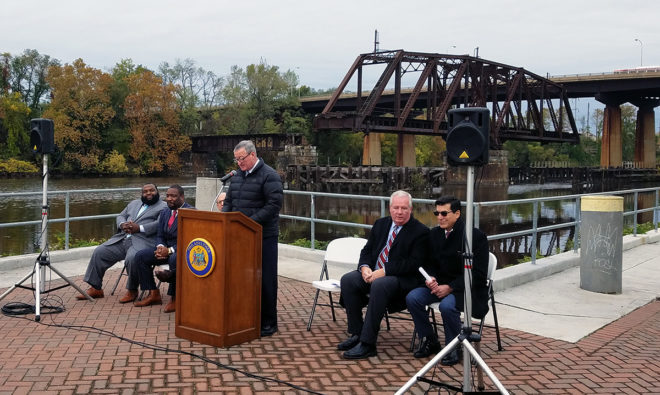 Mayor Kenney addresses the crowd with the old PWB Railroad Bridge No. 1 in the background. | Photo: GroJLart

On a cloudy Wednesday morning, City and State officials and representatives from Conrail, CSX, and the Schuylkill River Development Corporation held a ceremony marking the property transfer of the 115-year-old Philadelphia, Wilmington, and Baltimore Railroad Bridge No. 1 to the City of Philadelphia.

The transfer marks the beginning of long-awaited plans to link the Gray’s Ferry Crescent Trail and Bartram’s Mile into a single unit of the Schuylkill River Trail, which will eventually connect to its parent trail across the river that currently terminates at South Street, soon to extend to Christian Street.

Mayor Jim Kenney told Hidden City Daily, “Our continued effort is to get people in every neighborhood to have direct access to the waterfront, whether it’s the Delaware or the Schuylkill. People like being by the water, but these industrial  impediments made it historically difficult for people to get to. Since the deindustrialization of the country we’ve been able to repurpose these areas for public access.”

With the property transfer complete, construction of the $13 million project, under the direction of architecture and engineering firm Amman & Whitney, will begin to replace the 226-foot swing truss and redesign its 97-foot approaches. A new bridge will resemble the original, while the approaches will lift the crossing to allow for clearance of river traffic. The new bridge will also have the capability to swing open for larger sea-faring vessels to pass through.

Ceremonial accolades for the bridge transfer focused on the effect it will have on the Gray’s Ferry and Southwest Philadelphia neighborhoods. City Councilman Kenyatta Johnson told Hidden City Daily, “I think it’s great to connect South Philadelphia and Southwest Philadelphia, most importantly allowing a space were people can come together from both communities.” State Representative Jordan Harris, in his speech to the crowd, stated, “These two communities, as many would try to make them seem so different, they are yet still such the same. The benefit of this is that two communities that may be divided by a river may be connected by a bridge.”

Additional praise focused on the amenity the trail already provides for the neighborhood and how the swing bridge connection will improve upon it. Josh Nims, operations manager for Schuylkill River Development Corporation, said, “There’s never been a way to connect pedestrians and bicycles all alone across the Schuylkill East to West on the Lower Schuylkill.” Representative Harris, who helped deliver the State’s portion of funding to the project, said, “This gives our young people more recreational opportunities. You want to reduce violence? Bring more recreational opportunities.”

The Gray’s Ferry Crescent portion of the Schuylkill River Trail has given the neighborhood a new public amenity, while also spurring development. “Since the adoption of our Master Plan [for the Lower Schuylkill] nearly $100 million of private investment has occurred along the lower river,” said John Grady, President of the Philadelphia Industrial Development Corporation, to the crowd. “New facilities, infrastructure, nearly 65 new companies have opened up operations in this area around the trail, and there are nearly 300 people coming to work every day that were not coming to work previously.” 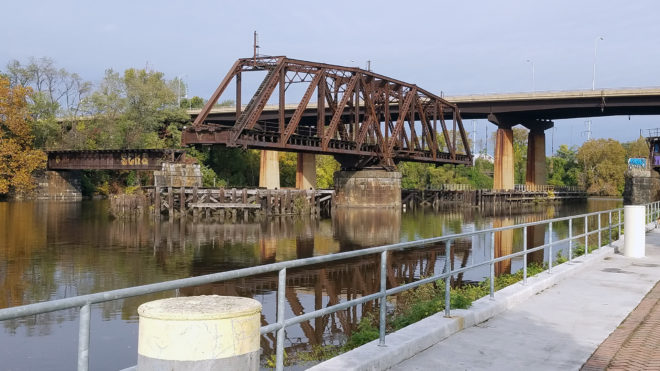 The agreement for the acquisition was made last spring, but a bill brought before City Council was required for the transfer to take place. The project was also delayed due to a key source of funding–a Transportation Improvements Generating Economic Recovery (TIGER) grant for $3.6 million. The federal funds required a National Environmental Policy Act (NEPA) review and a historic resource review. Parts of the NEPA review were delayed by historic preservation concerns over dismantling the steel truss and the input of many of the players involved, which include, but are not limited to, the Schuylkill River Development Corporation (administrating the project), the City, PennDOT, and the U.S. Coast Guard.

After deliberating for several years on different options for the reuse and rebuilding of the bridge, all working parts have finally fallen into place. Groundbreaking is expected in early 2018 with completion of the project projected for 2019. The new bridge will be called Conrail Crossing.

Jocelyn Hill, public affairs director for Conrail, explained the new name to Hidden City Daily, “We wanted to highlight the historic nature of the crossing. It connected the two neighborhoods and we’re really excited about doing that again. Also, because of the railroad history, the city of Philadelphia was built for and a large extent grew on the back of the railroads.”

Completed in 1902, the Philadelphia, Wilmington, and Baltimore Railroad Bridge No. 1 was constructed by the American Bridge Company out of Coraopolis, Pennsylvania. The Railroad Revitalization and Regulatory Reform Act of 1976 allowed for the sale of the bridge to the Consolidated Rail Corporation, aka Conrail, which used the bridge sporadically until 1984.