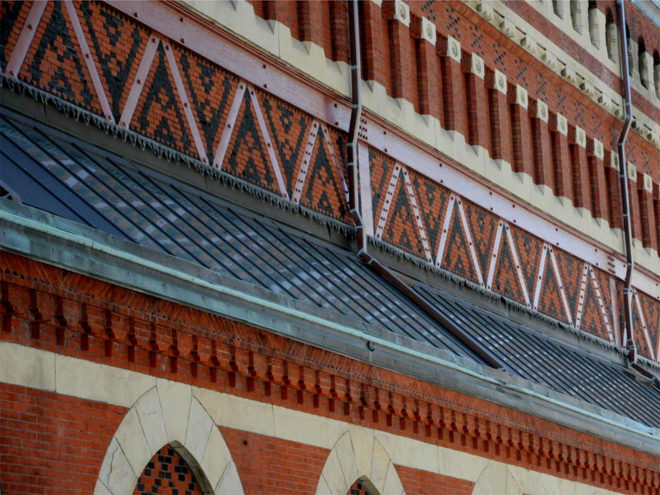 Wresting the long-flying flag of Modernism from its Eurocentric moorings, architecture and cultural historian George E. Thomas boldly replants it on American soil and firmly in Philadelphia. First Modern: Pennsylvania Academy of the Fine Arts, his new hardcover treatise on architect Frank Furness’ Broad Street masterpiece, is an eminently accessible, amply illustrated revelation of PAFA as the true international cornerstone of Modern architecture in the Western world.

Thomas’ epiphany dates back to the early 1970s when he looked around Philadelphia and saw that University of Pennsylvania’s doctrinaire architecture faculty had ignored their own city. In the case of Furness, they couldn’t see past Victorian ornamentation to the pathbreaking essentials of his work. Ironically, a genealogical view of American architecture would witness master practitioners flowing through the thriving office and stellar works of Frank Furness.

Long since dwarfed by subsequent developments, PAFA still reigns on Broad Street triumphantly, a polychrome example of the architect as a cultural conduit with remarkable architectural pyrotechnics on display. In their design, architects Frank Furness and George W. Hewitt drew knowledgeably upon vast influences architectural, industrial, and cultural.

In 1874, machine designer Coleman Sellers, surveying the landscape of new machines in Philadelphia, fittingly declared that “new purposes need new forms.” Philadelphia is uniquely inclined, historically, to nuture the symbiosis of art and science, “Sometimes within one person,” says Thomas. Furness was allied with titans of engineering and the railroad industry. The forged iron of the railroads wove into a birds nest of delicate skylight trusses at PAFA, the vigorous pumps and pistons of machinery spawned the design of its inventive brass lamps and balustrades. 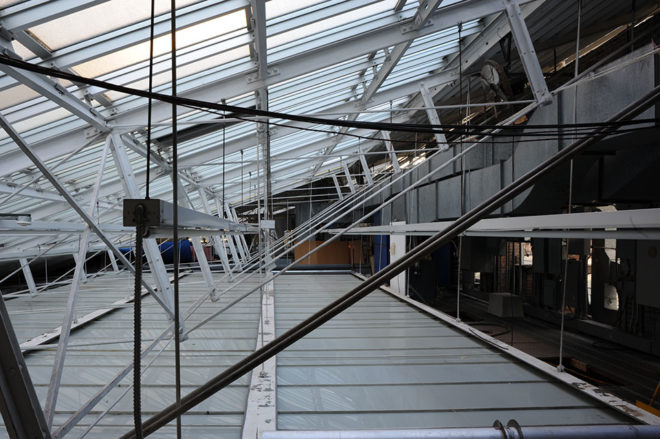 A daring architectural and industrial crucible was, thus, the genesis of the timeless beauty and architectural deftness that is PAFA, “A logistical masterpiece,” says Thomas. The nation’s oldest and first art museum and art school was planned with such a lucid specificity of purpose that it is just as commodious and sound now as it was when it opened in April 1876. The great, 19th century horse-sized freight elevator on the west side, built to bring live horses in for comparative anatomy studies, suits 21st century horses just as well.

PAFA president and CEO Dr. David Brigham speaks to PAFA’s future, maintaining its stature as an important civic institution, saying, “PAFA is committed to its 212-year-long mission to promote cultivation of the Fine Arts, in the USA by training artists, collecting and exhibiting American art, and presenting a rich array of public programs.”

Brigham outlines $8 million in recent technical upgrades and renovations to the PAFA Historic Landmark Building, part of a $25 million campus Master Plan, including skylight replacements, masonry repairs to the crenellated cornice, replacement of freight and passenger elevators, an ADA elevator and entrance, and a new ADA accessible restroom on the gallery level. PAFA’s new Community Education Center is now where the café used to be, and the plaster and gold leaf ornament in the Grand Stairhall has been restored.

The campus Master Plan will consolidate administrative functions with those next door in the Hamilton Building, freeing up space in PAFA, allowing removal of mezzanines that are not original to the building, thus restoring double height gallery and studio classroom space on the first floor. PAFA also plans to renovate the auditorium to serve as gallery space for contemporary art. Brigham says, “Next up, ADA renovation of four restrooms, replacement of another side of the chiller plant, and replacement of windows.” School officials hope to complete the projects by the end of 2019. 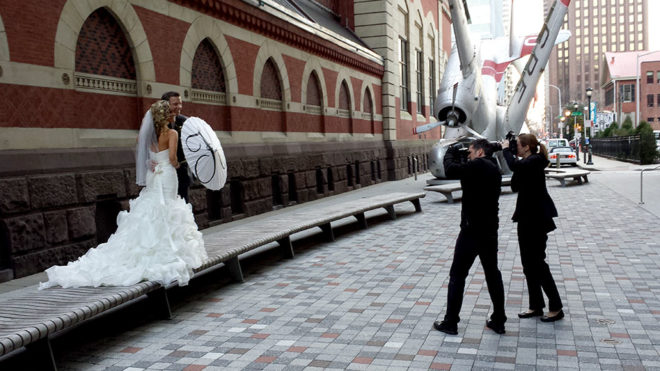 To say that PAFA has “good bones” as it embarks on this renewed effort to fully upgrade its utilities and temperature control systems is an understatement. The more you understand its underpinnings the more you read the building not only as quirky, historical pastiche, but as a sophisticated, innovative orchestration of art, finance, and technology creating a highly tuned machine for art. A 19th century writer, trying to make sense of critical confusion over the new, flamboyant architectural apparition at 118 Broad Street, referred to it as a “conception of marvelous incongruities.” To this day, through different lenses, we continue to ponder its lasting, energetic existence.

George E. Thomas, author of First Modern and co-director of the Critical Conservation Masters Design program in the Graduate School of Design at Harvard, throws down the gauntlet, proclaiming PAFA as the original catalyst of the Modernist movement. Inviting direct competition for that lofty title, Thomas rests his case on the building’s merits in the book, saying, “The Academy warrants a central place in this narrative. Unlike the earlier buildings that made fragmentary and disconnected use of the new industrial materials and systems, the Academy project combined the critical elements of modern logistical planning, steel and iron construction, and modern plumbing, heating and ventilation systems… Rather than seeking to reify the past, the architects chose the most dynamic of modern forces, the machine, as both inspiration and ornament.”