I have never been to a Thanksgiving Day parade in Philadelphia, and I will probably never go to one. It’s not that the 6ABC Dunkin’ Donuts Thanksgiving Day Parade isn’t a streamlined spectacle worthy of a crowd. Nor should it suffer comparisons to that other Turkey Day street party thrown by our neighbors in New York City. Philly’s parade, which celebrates its 97th year tomorrow, is a fine, varnished display. If you like Disney movies, aggressive branding, and all of the corporate trappings of generic, sponsor-driven events, by all means, enjoy. But what our parade does lack these days–at least from what I’ve gathered from watching it on TV–is actual hometown authenticity and that unmistakeable touch of Philly delirium, something that the original Gimbles Thanksgiving Day Parade seemed to have had in spades.

The following is a little holiday tribute to the weird, menacing hilarity of parade float designs that graced the Benjamin Franklin Parkway from the 1950s to the 1970s. You will see a giant raccoon with a revolver, a vicious vampire in front of the Art Museum, an utterly crazed depiction of Samson, and other charmingly nightmarish examples of Philly-style lunacy. The cute, the kooky, and the downright creepy.

This Thanksgiving, let’s give thanks for shedding some of the city’s worst, worn-out cliches as we slip into something a little more contemporary. But let us remember that what gives Philly its identity–the grit, the humor, the artful cynicism, and the genuine sincerity–is well worth preserving. 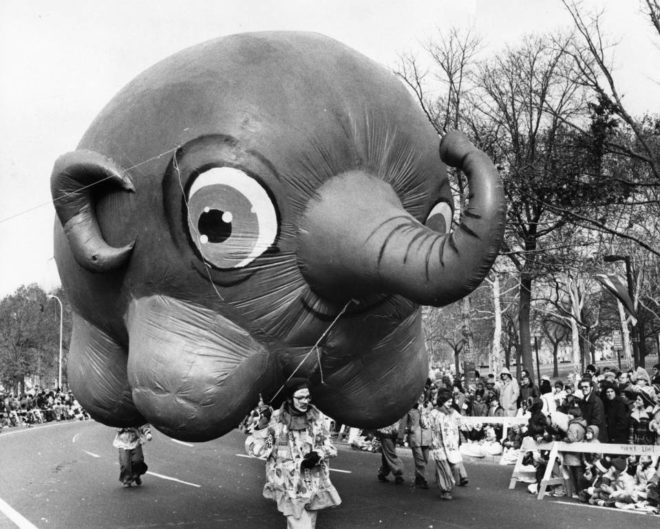 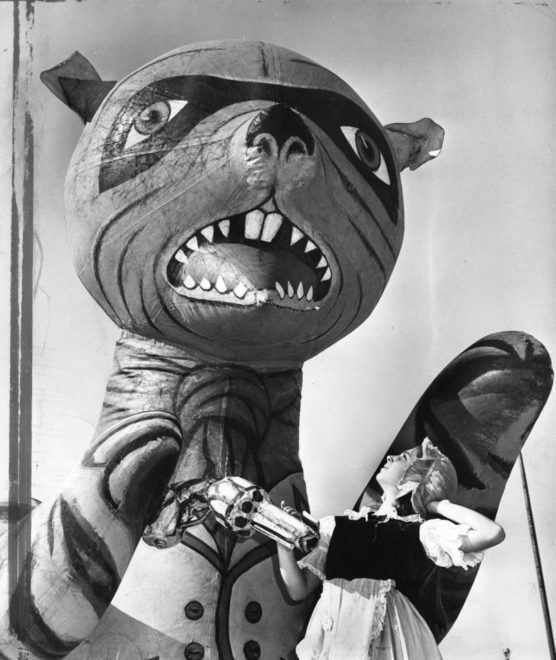 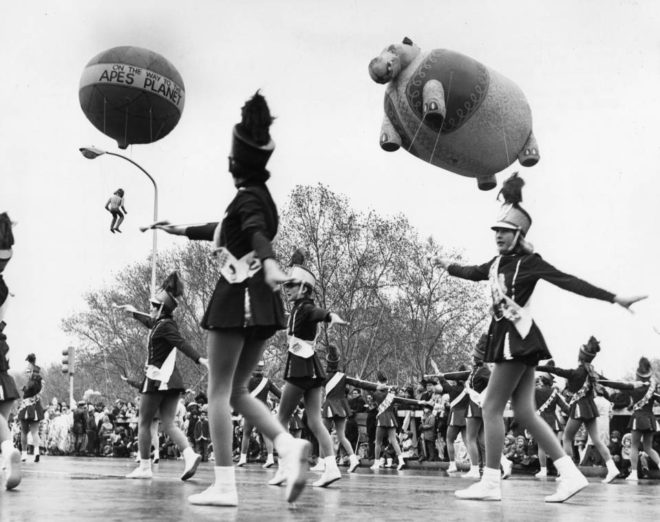 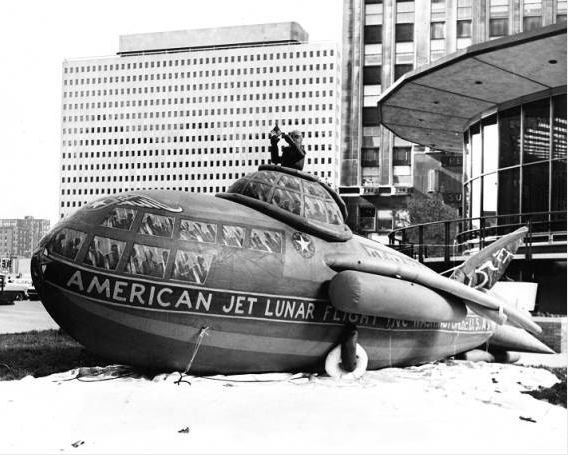 “American Jet Lunar Flight. Just having landed on the moon this space craft with passengers in the windows shows the space pilot coming out of the hatch waving an American flag. The John F. Kennedy Plaza Hospitality Center can be seen on the right.” Thanksgiving 1962. | Photo: Dominic Pasquarella 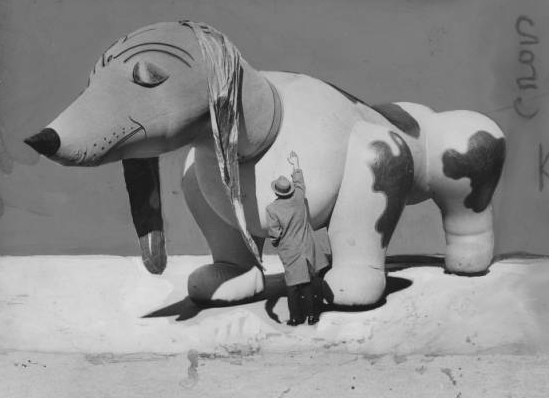 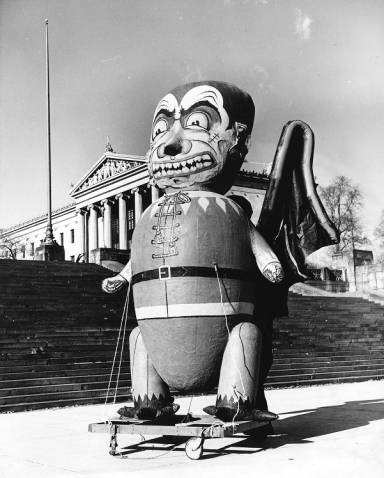 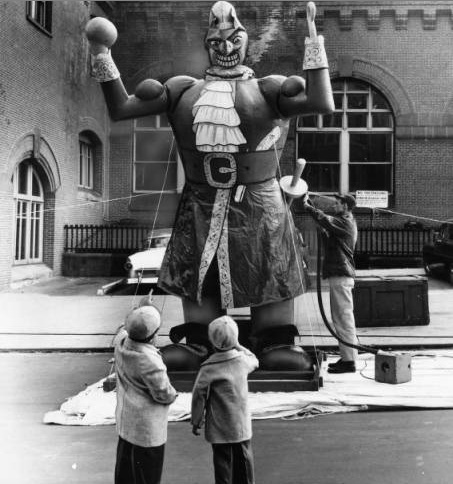 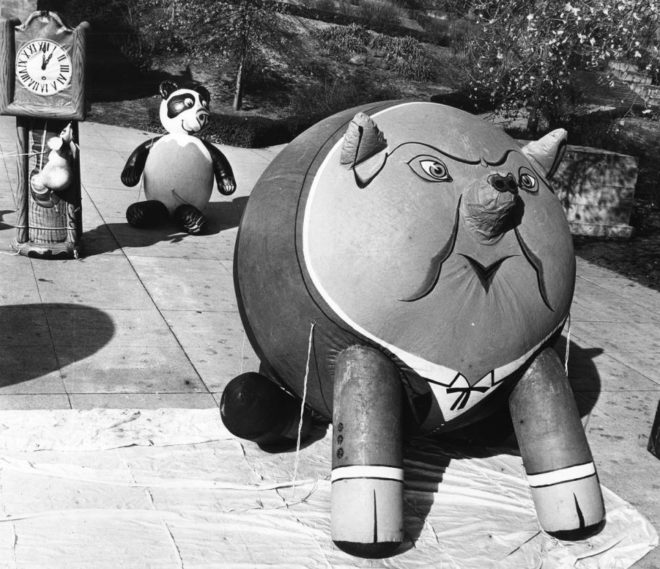 “In the foreground: ‘The Pig that Went to Market’ followed by: ‘Hickory, Dickory, Dock’, and ‘Panda the Bear.'” Thanksgiving 1968. | Photo: Dominic Pasquarella 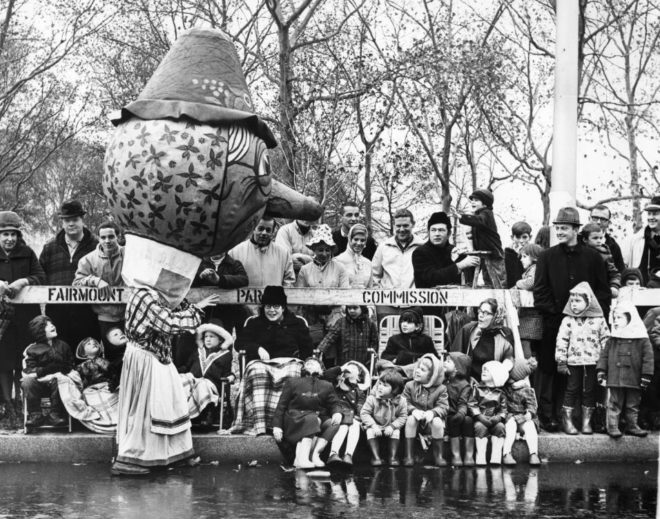 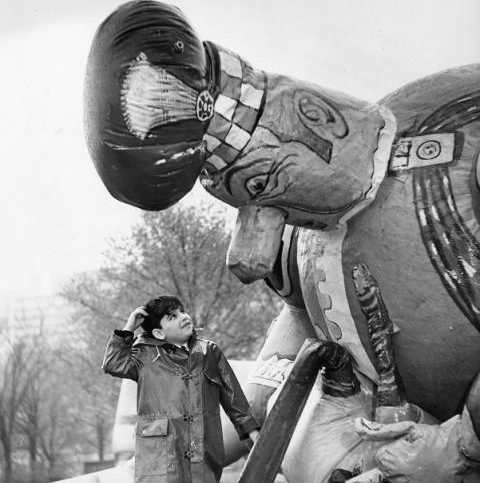 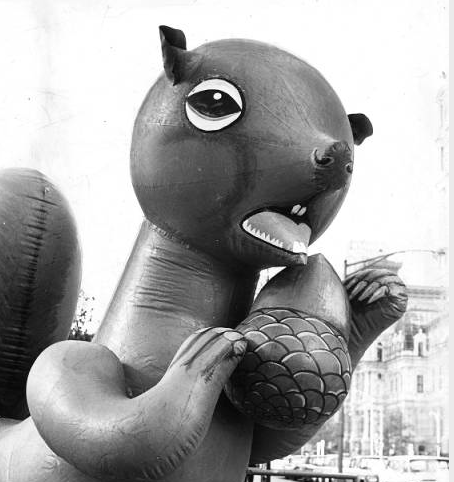 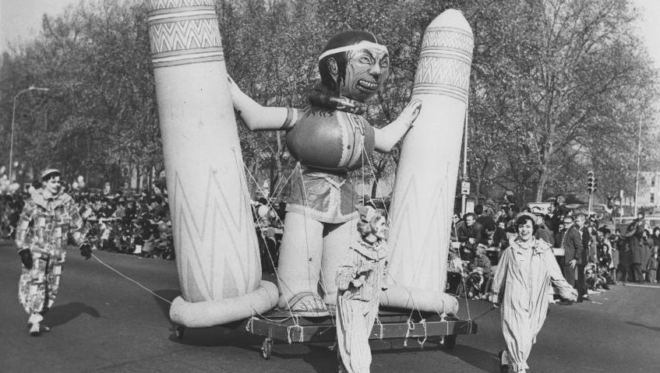 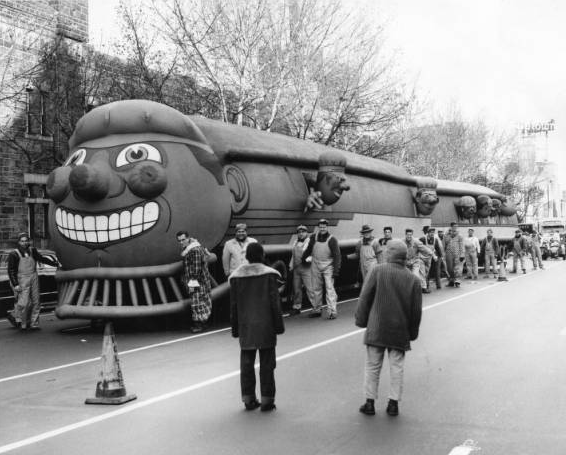 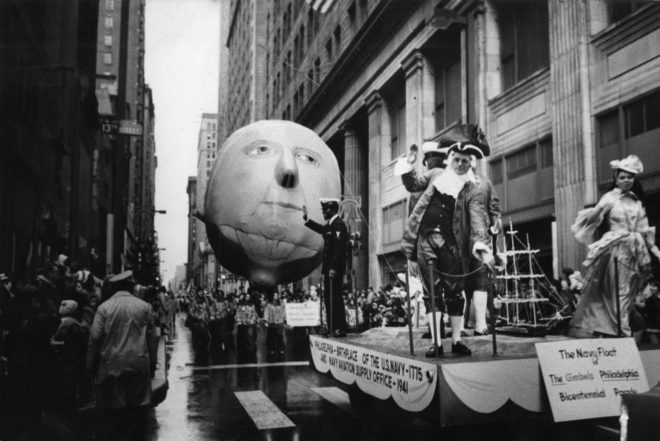 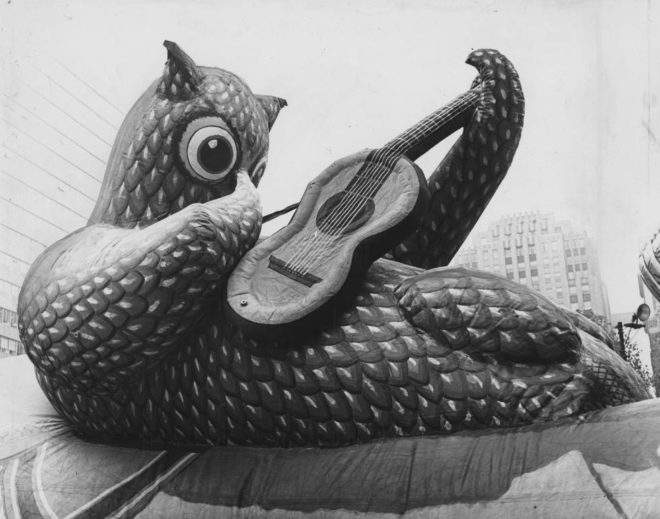 “One of the giant balloons in the Thanksgiving Day parade features a guitar-playing owl as part of an ‘Owl and Pussy Cat’ float.” Thanksgiving 1961. | Photo: Dominic Pasquarella 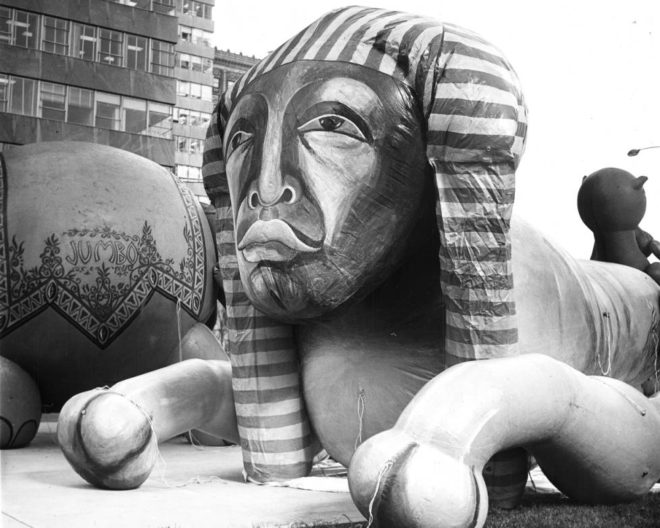 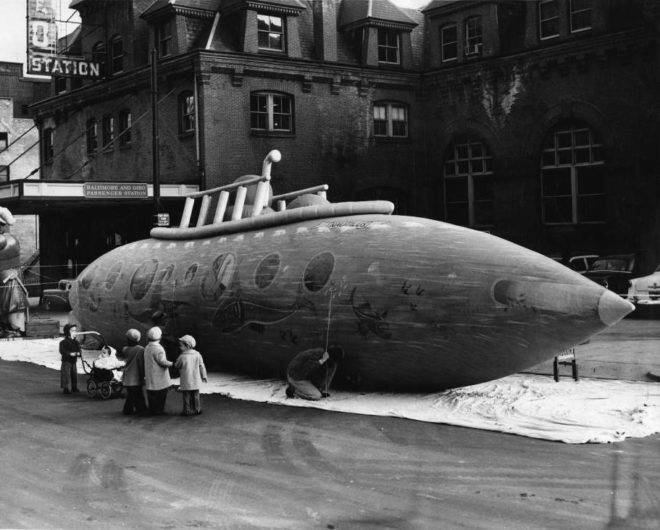 “Patients from Children’s Hospital get a preview of Gimbel’s 38th annual Thanksgiving Day parade by watching workmen inflate a 60-foot-long balloon model of the submarine Nautilus at 24th and Chestnut Sts.” The Baltimore and Ohio Passenger Station can be seen on the right. Thanksgiving 1958. | Photo: Joseph Wasko 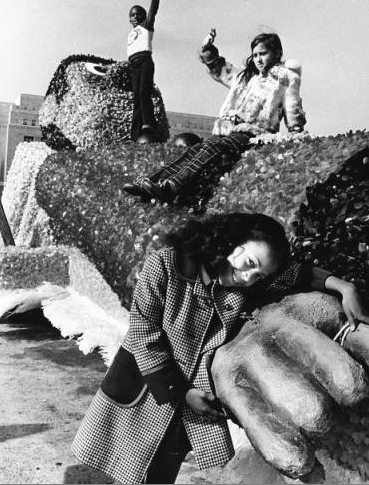 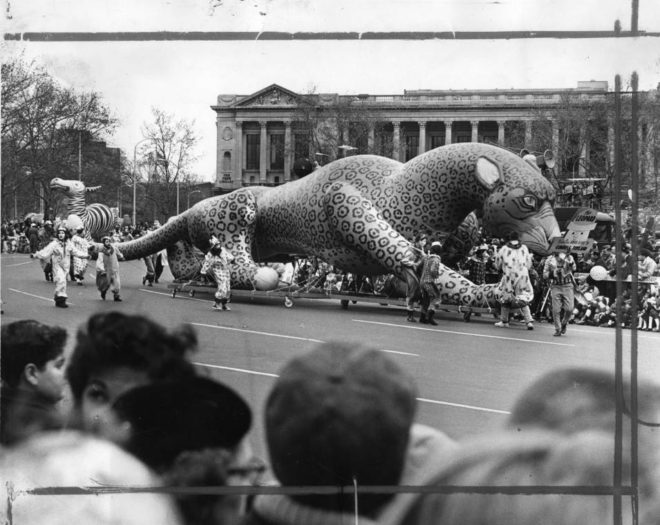 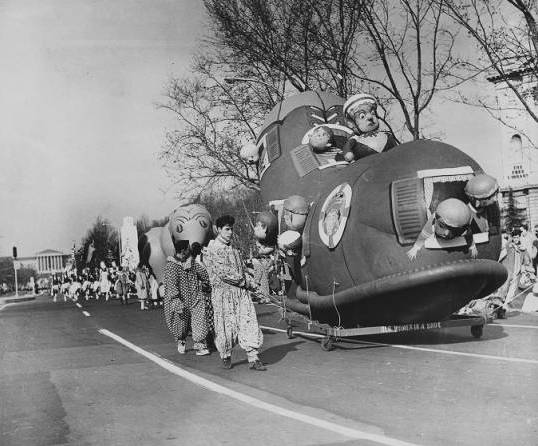 “Mother Goose section features the Old Woman in the Shoe as the traditional holiday salute moves along the Benjamin Franklin Parkway to the downtown shopping area.” Thanksgiving 1959. | No photographer listed. 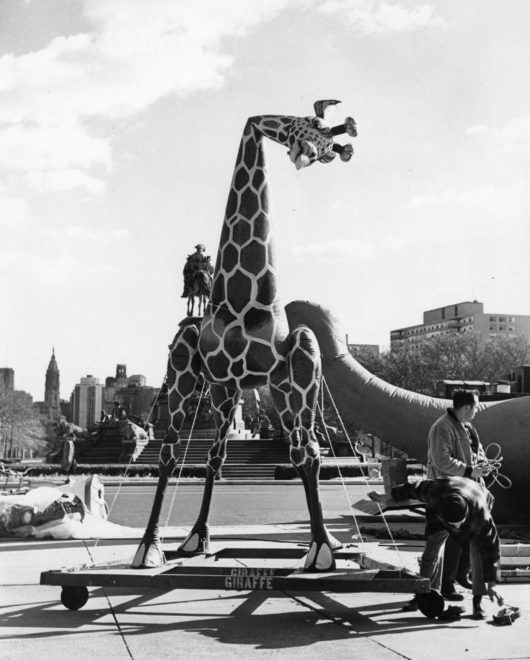 “Buffeting winds didn’t quite seem to agree with the Gimbel Thanksgiving Day balloon floats on preview today. Not only is the Giraffe’s neck heading south with the wind, but some where in his travels [he] seems to have picked up a horse and its rider in its back.” Thanksgiving 1965. | Photo: Dominic Pasquarella 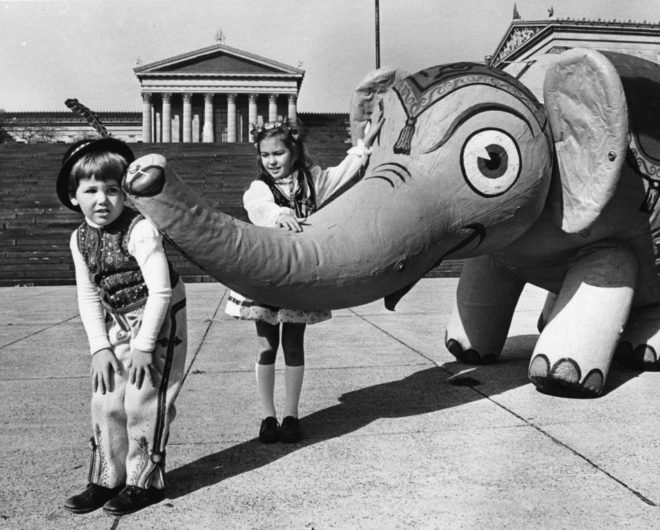 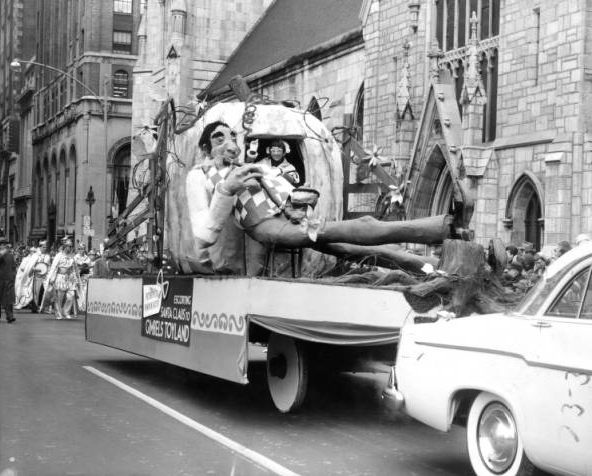 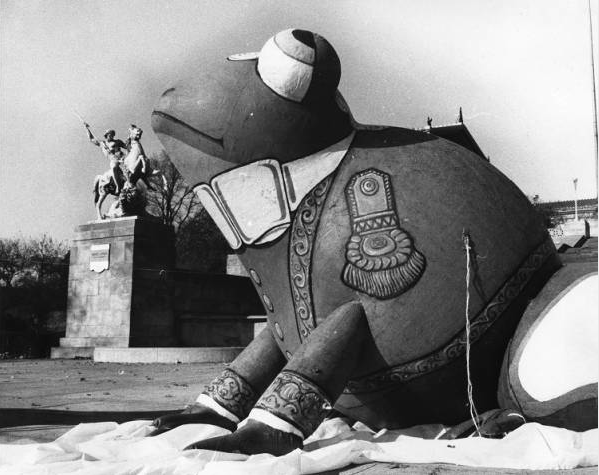 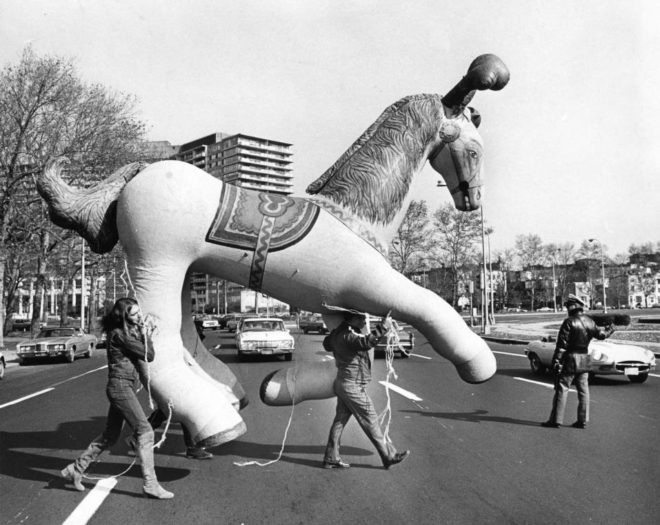 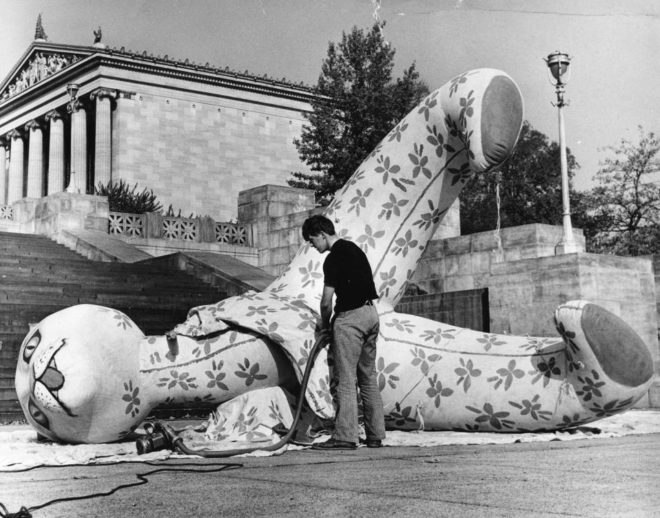