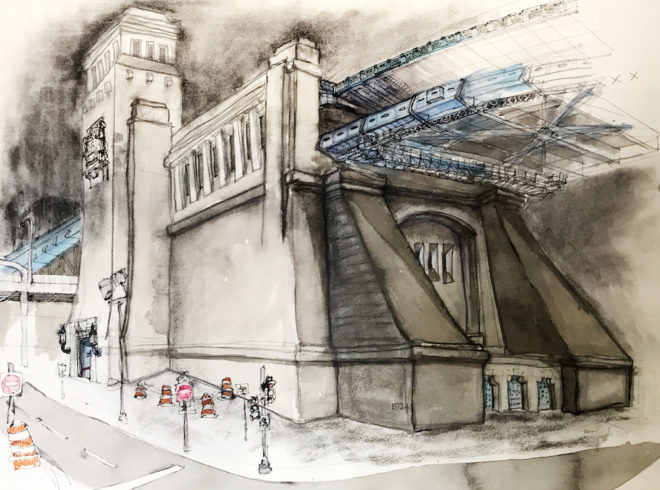 Editor’s note: Architectural drawing is a dying art. Before the digital revolution gave birth to drafting software, renderings of buildings, bridges, barrel vaults, and bell towers were meticulously illustrated by hand. And although most of the technical work done for architectural and engineering firms in the past left no room for emotion or expression, a human touch, and a physical object, remained. Inspired by the centuries-old craft, and with an eye for the energy emanating from our aging, built landscape, illustrator Ben Leech documents the work of French-born architect Paul Phillipe Cret in his new exhibition, “Cret Illustrated: Revisiting a Philadelphia Icon in Sketches,” opening tonight inside the Hamilton Mansion at The Woodlands cemetery.

Leech, founder of Archivolt Press and a longtime contributor to Hidden City Daily, captures the hum and buzz of time embedded in old buildings with both training and instinct. His drawings are precise, yet raw; technical, yet expressive. In his work, Leech records the traits of a structure with acuity, emotion, and a dash of urban mysticism.

Michael Bixler: Architect Paul Phillipe Cret, the subject of your new exhibition Woodlands Cemetery, Cret Illustrated: Revisiting a Philadelphia Icon in Sketches, left an indelible mark on the architectural fabric of Philadelphia. His most pronounced projects like the Benjamin Franklin Bridge, the Rodin Museum, the original Barnes Foundation gallery out in Merion, and the Henry Avenue Bridge resonate as his best-known works in Philly. But Cret’s smaller commissions pepper the city and create this wonderful breadcrumb trail of some of his most unique, ornate designs. What grabs you about his work, and what are some of your favorite Cret landmarks?

Ben Leech: When the idea of an all-Cret show first came up (over beers with The Woodlands executive director Jessica Baumert) it was exactly this “breadcrumb trail” aspect of the project that I was most intrigued by. I fully appreciated Cret and his place in Philadelphia’s architectural canon, but I can’t say I was especially enamored with what I thought was his marquee style—Beaux Arts classicism. But I was completely enamored with the idea of a “Paul Cret Safari,” as it were. And I quickly discovered on this safari that his work was a lot more unpredictable, idiosyncratic, even weird, than what I was expecting. Some of his stuff is definitely by-the-book classicism, which I don’t mean to dismiss by any means. It’s just not what usually tends to catch my eye. But he was absolutely twisting the knobs of classicism, and my favorite Cret works blur the lines between the Beaux Arts, Art Deco, and even Bauhaus modernism.

The University Avenue Bridge is a hard one to beat— it is probably the most ornate and “classically” attractive Schuylkill River bridge in the city, but at the same time looks completely at home in its industrial, somewhat rag-tag setting. The Integrity Trust building at 16th and Walnut also captures Cret’s underappreciated weirdness—you might know it as the “building with the eagles on it.” It originally had an amazing Art Deco banking hall whose demolition, in my book, ranks as one of the greatest losses of any Philadelphia interiors. But you can still see some of its original Art Deco doors in the vestibule of the Qdoba. I recommend everyone check them out. 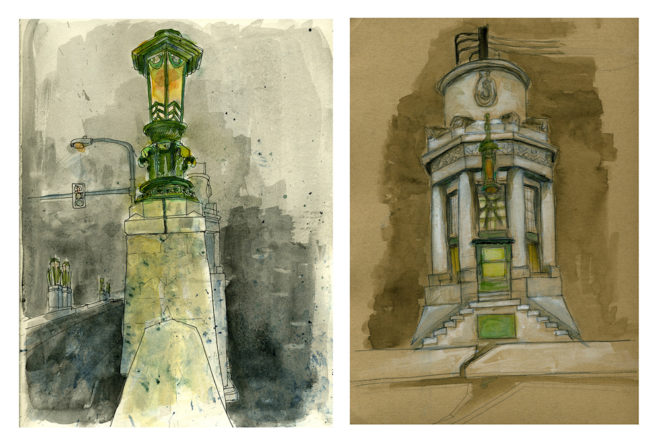 MB: Cret is buried at The Woodlands, making the Hamilton Mansion an ideal place to celebrate his life through an exhibition of your drawings. He also designed the gates of the cemetery, with its brilliant, winged hourglass motif. Being such an influential architect during his time, who created one of The Woodlands most iconic features, why do you think he choose a simple name plate for his grave marker?

BL: This project raised a lot of these “why” questions for me, and I had to make a choice early on—do I get lured into a deep dive of his written archives and correspondence, searching for solid answers to some of these questions, or do I focus on visiting his works themselves, maybe develop my own theories, but ultimately leave my questions unanswered? I do like to think that, after a career spent creating so many grandiose monuments and memorials (the Memorial Arch at Valley Forge, the Frankford War Memorial, his WWI battlefield memorials across Europe, the Eternal Light Peace Memorial at Gettysburg, Whitemarsh Memorial Park in Ambler, etc), he maybe felt like he was at peace with a simple marker for himself. Like, maybe he got all the grandeur out of his system. But that’s a great question to ask Lisa Pfueller Davidson and Catherine C. Lavoie from the Heritage Documentation Program of the National Park Service, who will be giving a lecture at The Woodlands on Cret’s war memorials on November 30.

BL: Bewitching is a great way to describe it. I have a totally obtuse line in my artist’s statement that says, “Old buildings vibrate at a frequency invisible to the naked eye.” I’m still not sure exactly what I’m trying to get at when I say that, but I do believe that there’s something almost alchemical about the subtle transformations of buildings over time. You’ll often hear about the “patina of age,” which I think goes part of the way to describing this allure, but not the whole way. I think most photographers and artists can relate to the feeling that older cities and older buildings just “hum” in a different way. I suppose I’m trying to capture some of that that in my drawings, but I’m also drawing in order to “hear” this humming more clearly. 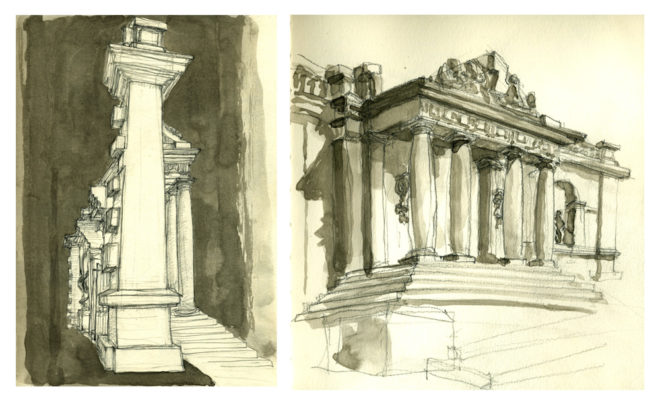 MB: Your style transcends traditional architectural drawing and seems more comfortable in the company of Expressionism. Colors bleed, buildings lurch and sway, hairline details spin tiny webs of controlled chaos. Can you tell me a little about your technique and how your unique reading of the city translates into your art work?

BL: For better or worse, I have a very casual attitude towards the rules of perspective, scale, etc. I’m not too interested in photographic accuracy, because, one, that’s what photographs are for, and, two, I think that our true experience of architecture is usually peripheral, fleeting, skewed through the corners of our eyes. But at the same time, I do enjoy the challenge of discovering and documenting some of the details in buildings and streetscapes that usually go unnoticed. Drawing is ultimately just an excuse to slow down and concentrate on looking at interesting things for more than two seconds, and for me, that’s usually on a sidewalk somewhere. 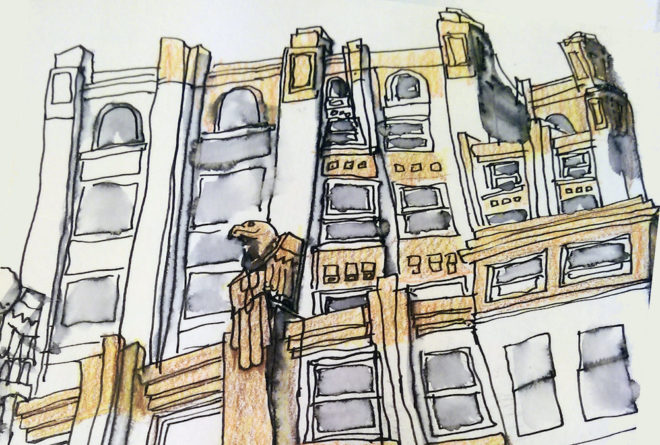 Integrity Trust Company, aka “the building with the eagles on it.” Ink and colored pencil (detail). | Drawing: Ben Leech

MB: In the age of 3D modeling software and virtual tours, architectural rendering by hand is largely a dying art. Next to computer-generated renderings, old drawings on paper by engineering and architecture firms from the 19th and 20th centuries give the appearance of high art. What is it about the human hand guiding a pen or pencil that cannot be replicated through AutoCAD?

BL: I think that a person looking at a hand-drawn image is, either consciously or unconsciously, aware of the time that another human being spent in creating it, which gives the image a certain intuitive sense of value. It’s not that digital renderings don’t also take time, and creativity, to produce, but I don’t think the perception of that time is as universally apparent. I think there’s a whisper of “Hey, look, someone spent time to draw this” that I ultimately hope translates into a viewer looking a little more closely than they would otherwise.

Cret Illustrated: Revisiting a Philadelphia Icon in Sketches opens tonight at Woodlands Cemetery with a reception at 5:30-8:00PM. The exhibition runs until January 13, 2018. For viewing hours and a list of related events, see the exhibit information page HERE.