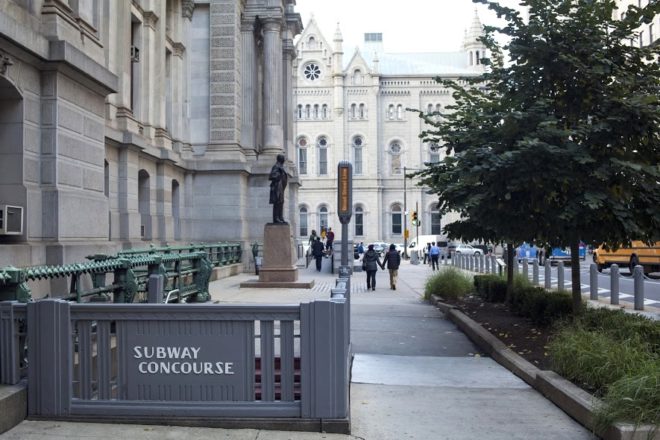 Six historic subway elements are located in and around City Hall. The two entrances on the east side are the most intact and the best examples of the Art Deco style installed along South Broad Street. They retain their original lamp standards with one original “subway” sign on each. | Photo: Starr Herr-Cardillo

Historic transit infrastructure is one of those overlooked features that make a city feel like a city. Subway signage and entrances in Paris, London, and New York are downright iconic. Grand Central Terminal is as noteworthy a tourist destination in the Big Apple as any. Here in Philly, we certainly have our share of high-style train stations–the grand and imposing 30th Street Station, the delectable Art Deco decor of Suburban Station, and the vampish Victorian stations along the Chestnut Hill Line, to name a few. But there is another, quieter contributor that is both ornate and utilitarian, but often goes unnoticed: the cast iron subway entrances that link the street to the underground.

The history of Philly’s subway system captivated the attention of local transit enthusiasts Nic Baker and Anthony Santaniello. The duo has spent their free time researching, documenting, and taking inventory of the city’s remaining historic subway entrances. After years of information gathering, Baker, a City Planning program graduate from PennDesign with a certificate in historic preservation, submitted a 67-page thematic district nomination, including 59 entrances, to the Philadelphia Historical Commission in October 2009. 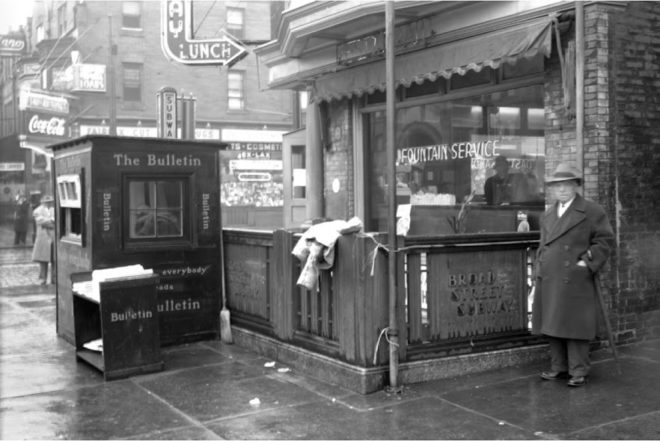 Entrance Snyder Station at Broad and Snyder Streets in 1940. | Image courtesy of PhillyHistory.org

The historical significance of the existing subway entrances has been recognized by the Preservation Alliance for Greater Philadelphia, which included the entrances on their Endangered Properties List in 2009, particularly those around City Hall, in the City Hall Courtyard, and along the Broad Street Line, which are the oldest and, arguably, the most worthy of protection. Years went by—a little over eight years, to be exact—and the nomination stalled awaiting review by the Historical Commission. This past October, after following up again, Baker was notified by the Historical Commission that that the nomination would likely not be approved. The response was vague, citing the Historical Commission’s inability to review district nominations due to understaffing. The researchers were also told that, due to a change in procedure, the entrances are now leased by SEPTA and that the Commission would not have jurisdiction to regulate them. 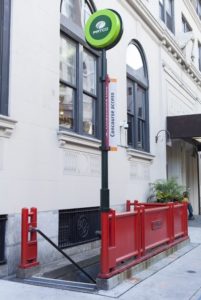 All of the original sign posts on PATCO’s Red Line have now been replaced with modern ones. | Photo: Starr Herr-Cardillo

Responding to Hidden City Daily for a comment on their decision to reject the nomination, the Historical Commission stated, “The Historical Commission has deferred action on the subway entrance thematic district nomination because of concerns regarding its legal authority to regulate the entrances. The subway entrances are managed by PATCO, an interstate agency, and SEPTA, both of which may challenge the Commission’s authority to impose regulations upon them. Some of these entrances were also likely to have been originally erected via special ordinances, which may also govern their maintenance and alterations. Moreover, most of the entrances are located in the right-of-way and therefore subject to Streets Department approvals and requirements, over which the Historical Commission has no jurisdiction.”

The Preservation Alliance for Greater Philadelphia declined to comment on the rejection of the nomination.

The subway entrances were owned by the City at the time the nomination was submitted in 2009. In fact, they still are. The entrances are only being leased by SEPTA, which, presumably, should pose no legal complication in the designation process. Many city-owned properties are listed on the Philadelphia Register of Historic Places. A number of train stations in Philadelphia are also listed as historical landmarks and therefore subject to the Historical Commission’s review, many of which are owned by SEPTA, Amtrak, and other agencies. Likewise, resources that fall under the jurisdiction of the Streets Department are already regulated by the Commission. A similarly-structured thematic district nomination for historic paved streets was approved by the Commission in 1998.

In theory, City ownership of such properties should make the nomination and designation process easier, not more difficult, rendering the Commission’s reasoning behind rejecting the nomination all the more puzzling. In fact, one of the most precedent-setting United States Supreme Court cases related to historic preservation involved Grand Central Terminal in New York City. The Court ruled in Penn Central v. City of New York in support of the City to designate the property as historic in the interest of the public good, even if it places some financial burden on the property owner, in this case a private railroad company. 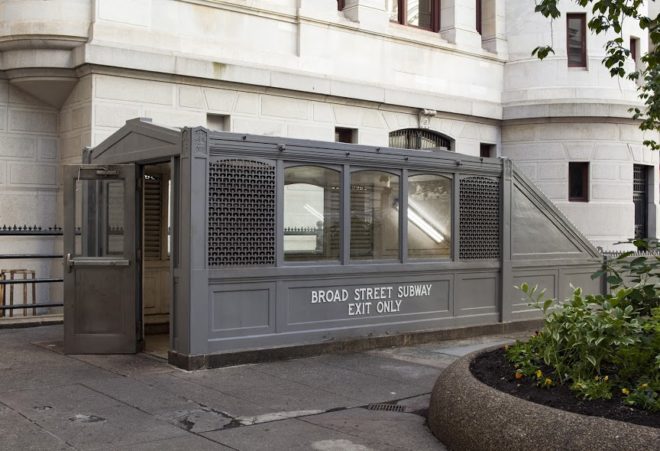 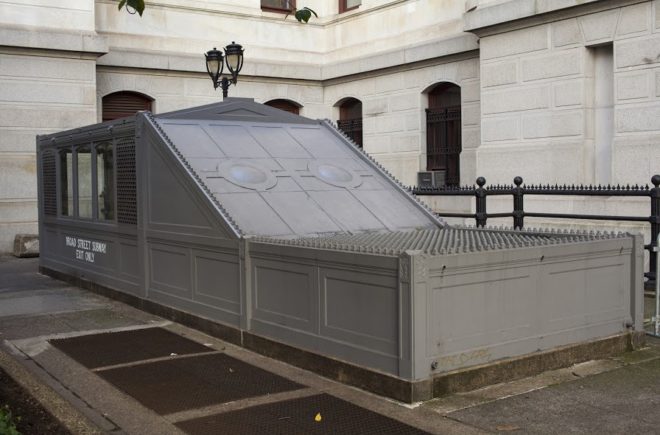 Baker’s nomination was submitted just as the Historical Commission effectively put an unofficial moratorium on reviewing and approving historic districts. The decision may have been brought on by political pushback against the proposed Overbrook Farms district, which would have placed protective regulation on hundreds of homes within the proposed boundaries. Currently, five district nominations await review by the Commission, some of which have been on the table for nearly a decade, representing well over 1,000 historic structures that could warrant landmark protection, yet continue to linger unprotected. This number doesn’t include the proposed Spruce Hill Historic District, shut down by Councilwoman Janie Blackwell in the late 1990s nor the proposed Penn Knox Historic District, a neighborhood in Germantown. The nomination was submitted in the late 1990s and went through the first round of review with the Commission, but staff never moved forward with the designation process.

Since the Overbrook debacle, some small districts have been approved, most recently “420 Row,” a group of eight homes comprising a block in Spruce Hill design by famed architectural firm G. W. & W. D. Hewitt. It is worth noting, however, that the row would have also been protected had the Spruce Hill Historic District not been stopped. Nomination of the small district was also supported by all of the property owners. 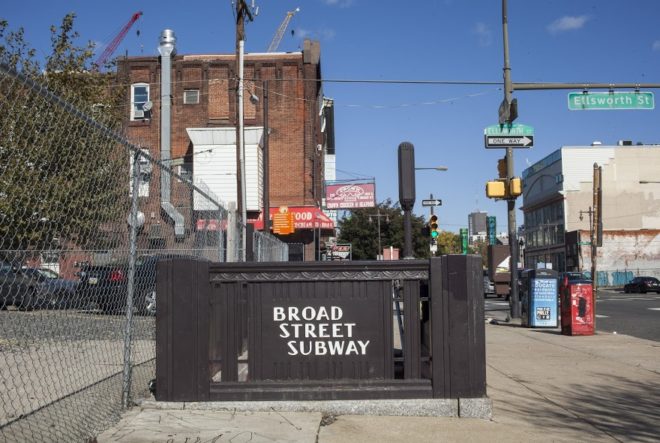 The subway exits along South Broad Street, including this stop at Broad and Ellsworth Streets, have a subtle Art Deco motif. The entrances were installed when the Broad Street line was expanded southward in the 1930s. | Photo: Starr Herr-Cardillo

Eight years is a long time in a rapidly redeveloping city like Philadelphia. Since the nomination was submitted, Santaniello estimates that around 25 percent of the entrances included in the nomination have been replaced, heavily altered, or suffer from neglect. That estimate jumps to over 50 percent if you include the replacement of PATCO’s original sign posts for the Red Line. Santaniello also notes that some stations, in particular the entrances at Logan Station, have recently been completely restored by SEPTA, indicating a willingness and interest in working with the City to preserve and restore, rather than upgrade to entirely new entrances. Whether the Historical Commission is aware these efforts or not is uncertain.