On Monday, November 27, the Philadelphia City Council held a hearing on the controversial Mixed Income Housing Program bill introduced on June 22, 2017. The bill, sponsored by Council members Maria Quinones-Sanchez, Darrell Clarke, Janie Blackwell, and Kenyatta Johnson, was created with the intention of equalizing housing opportunities as the city experiences a sustained spike in demand at all income levels. Advocates on all sides of the discussion crowded the Council Chamber, including activists holding up signs saying “Development not displacement” and “Our homes, not nursing homes.” After five hours of testimony from proponents and opponents of the bill, Council members voted to table the bill until December 5. 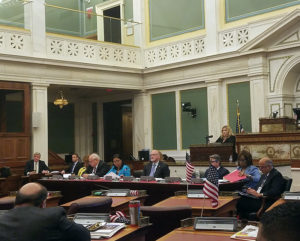 The bill has been derided by local developers and severely criticized in a detailed study by the Building Industry Association of Philadelphia, a local group of developers, builders, architects, designers, financiers, real estate professionals, and others involved in commercial real estate development. BIA’s October study concluded that Philadelphia has plenty of existing affordable housing in an abundance that far exceeds any other city with an inclusionary zoning program. The study maintains that similar programs in other cities have had mixed results. The BIA study claims that the average return on investment (ROI) for residential projects would be more or less neutralized by the bill, the bill would have a profoundly negative effect on Philadelphia’s housing stock in both quality and affordability, and suggests that a better solution would be a public-private partnership that would aim to lower the cost of constructing new housing and increase the ROI for the improvement of existing housing. Included in the report are examples of recently built projects that, the study affirms, would be impossible to build under the bill’s guidelines.

The Philadelphia Association of Community Development Corporations (PACDC) issued a rebuttal shortly afterward the report was published that criticized the accuracy and methodology of the BIA study, stating that the report’s numbers were not accurate and that the included examples did not take into account the bonuses in density offered by the bill.

Developers are not the only ones opposed to the bill. Jon Geeting, local market urbanist and director of engagement for Philadelphia 3.0, told Hidden City Daily, “While the bill’s supporters have their heart in the right place, we really need to go back to the drawing board and come up with something that won’t put a huge damper on apartment construction in the city. As it’s written now, we could end up losing many more units than we gain, which would be tragic since Philly has been doing much better than many of our peer cities at keeping apartment supply and demand in balance.”

The vast majority of Registered Community Organizations were not included in any discussions regarding the bill. Commentary on social media platforms, like the Facebook community page UrbanPHL, has suggested that the exclusion of many RCOs may be because those organizations would oppose the increased density allowed by the bill. They were correct. Representatives of the Society Hill Civic Association, West Powelton/Saunders Park RCO, the Philadelphia Chinatown Development Corporation, and others submitted testimony at the hearing stating that the density bonuses in the bill would disrupt the building standards and heights established in their respective neighborhoods. Alternatively, the Frankford CDC testified in support of the bill, stating that they believed that the bill does not go far enough since it was changed to only include high-density parcels. “[The bill] should be expanded to cover neighborhoods where residents are being displaced,” said Kimberly Washington, executive director of the Frankford CDC.

The PACDC and other supporters of the bill hope that avenues to provide more affordable housing will offset the incentivization of developing market rate housing in the city by subsidies like the 10-year tax abatement.

Early last week, the original bill was amended to, among other measures, eliminate “substantial alteration” as a trigger to include affordable housing, geographically isolate the bill to higher-density zoning designations, create a higher bar of income for eligible tenants and buyers, allow an opening for developers to provide affordable units off-site, and changed the density bonuses given to developers.

Despite the changes, interests from several sides of the argument were not satisfied with the revised bill. The Philadelphia Planning Commission, at their meeting on November 21, made a non-binding recommendation that the bill be put on hold.

Nine separate groups testified at the hearing–panels representing developers, RCO’s, non-profit organizations, business organizations, and others. The first to testify was Anne Fadullon, director of the Department of Planning and Development of the City of Philadelphia. Her hour-and-a-half long testimony, by far the longest all day, began with her opposition to the bill based on its content, not its goal, calling the bill a “work in progress.”

“Our shared goal must be balanced and a fair deal for all. We undertake further analysis with stakeholders and the public that the program’s affordable housing obligations are sustainable, said Fadullon. “We must also analyze the economic impact of the program and how it will alter development patterns. I believe a balance can be struck.”

Fadullon laid down several facts surrounding the zoning, development, current affordable housing policies and procedures, and brought up many of the bill’s shortcomings when questioned by the Council members. One concern was how floor area ratio bonuses given to developers in exchange for affordable units may be difficult for developers to include in neighborhoods with overlays restricting height and footprint. Another issue she brought up was the option that allowed developers to create off-site units, stating that it would be “complicated to make that operational. How it would work, how you staff it, oversee it. I’m not sure the complication is worth the handful of units you’d get”, said Fadullon.

She also explained that the bill creates another layer of complexity for developers to build on high-density zoned properties, pushing them out to the lower-density zoned neighborhoods, perhaps effecting affordability in those areas in the opposite way the bill intends. “There’s no ‘magic bullet’ for the gentrification issues,” said Fadullon. 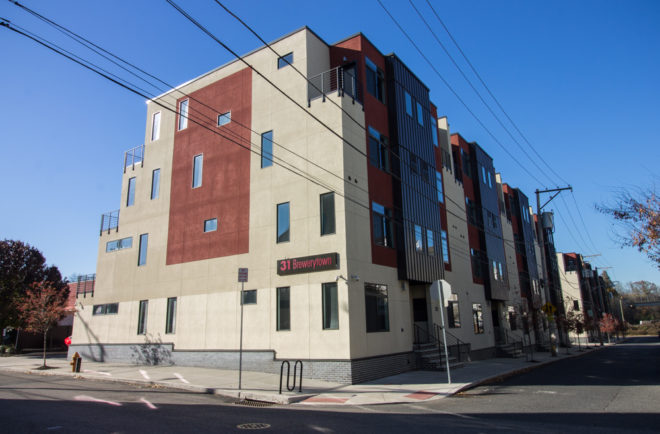 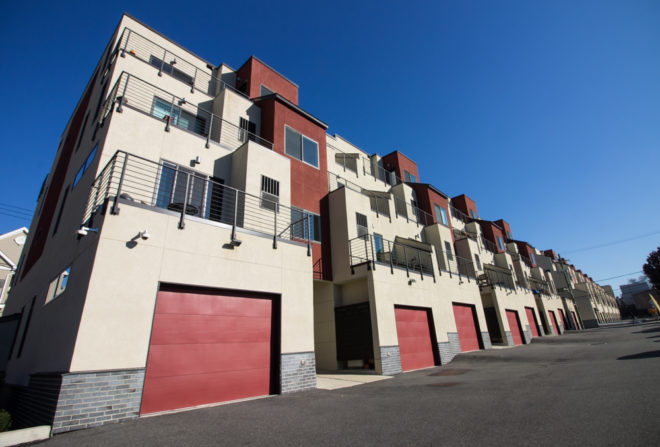 31 Brewerytown was used in a study conducted by the Building Industry Association of Philadelphia as an example of a new development that, the report alleges, would have experienced a negative net profit under the original version of the Mixed Income Housing Program bill. | Photos: Michael Bixler

The following testifying groups alternated between “for” and “against” the bill, each side repeating similar concerns. Proponents of the bill illustrated the dire need for affordable housing and cited the varying levels of poverty across the city. Some identified gentrification issues that they believe would be lessened by the bill, while others brought up how many units of affordable housing were lost in recent years. Others invoked programs in other cities and towns that have been successful. Several groups in favor of the bill expressed concern and dismay for the fact that the amended version only applies to high-density parcels. “Although we urge the passage of the bill in its current form, we strongly recommend future amendments that will grow the program,” said Rasheedah Phillips, managing attorney of Community Legal Services, Inc.

Nilda Ruiz, president and CEO of Asociation Puertoriquenos En Marcha, said in her testimony, “We are living proof that this can work,” referring to Paseo Verde, a mixed-use, mixed-income housing development with subsidized market-rate units that this non-profit developer built in 2013.

The opponents of the bill brought up unintended consequences that could exacerbate the issues the bill is trying to solve. They maintained that it wasn’t in a state that was ready to be passed, that it directly targets the building, development, and real estate industry and will effect all the related jobs, and that the amended version was created too recently to be fully reviewed (only 2 business days). A group consisting of BIA representatives and large, local developers, along with Rob Wonderling of the Greater Philadelphia Chamber of Commerce, had the second-longest testimony at 40 minutes.

Carl Dranoff, CEO of Dranoff Properties, made his opinion clear. “As a result of [this bill], few, if any, Center City developers will building anything. If new housing is stifled, few, if any, affordable units or payments to the [Housing] Trust Fund would result. 100% of nothing is nothing.”

Dranoff later stated, “There is a danger in passing this bill during ‘boom times.’ We need to have something that incentivizes and doesn’t penalize developers from developing, especially if times turn bad, which inevitably they will.”

In his testimony,  David W. Feldman, executive director of the Development Workshop, expressed a different type of opposition, and explained that some proponents believe the bill isn’t ready. “We absolutely want this bill to come out and want this bill to work when it comes out, and we don’t want all the unintended negative consequences.”

During the testimony, some Council members let their feelings be known. Councilman Curtis Jones Jr. declared, “There is an apartheid in certain areas not based on race. I don’t want to go into a neighborhood where people used to be from.”

Councilman-at-Large Allan Domb, himself one of the top realtors in the city, said, “I think we need a detailed fiscal impact study of this bill.” Domb went on to indicate that two banks contacted him to say that they would have trouble financing development projects that included mandatory affordable housing described in the bill. Quoting the banks’ concerns, Domb said, “This is a credit risk that would impede our ability to lend capital to developers in Philadelphia.”

Council President Darrell Clarke stopped in on the hearing to give his two cents, explaining that “there is a significant issue in what we’re seeing” regarding housing affordability, stating that the issue is not just affecting the city and the state, but the entire country. “Just like we created the 10-year tax abatement we also need to talk about, on a local level, the ability to build affordable housing.”

After nearly five hours of testimony from the various groups, many on the list to speak during the hearing were unable to stay long enough to make their statements. The Council ultimately voted to table the public meeting regarding the bill until December 5th.