Outdoor advertising has been a bone of contention with Philadelphians for more than a century. The bill passed by Philadelphia City Council in 2011 that created the Market East Advertising District was intended to help stimulate more commerce on the city’s former premiere retail stretch. Spiking new interest in commercial redevelopment through snazzy advertising along Market Street didn’t really come to fruition until 2015 when the old Lits Brothers building had a new digital sign placed on its roof. The sign was the same size and shape as the static Lits Brothers sign that was there decades earlier. Immediately after the sign was activated complaints of light pollution flooded in from all over the city and nearby neighbors in Washington Square West. “We’re not New York!” went the naysayers. The fear that more digital signs will pop up in other parts of the city kept many resident up-in-arms

A few weeks ago, the first digital signs on the new East Market mixed-use development were activated, spurring similar concerns from vocal opponents on social media. More digital signs are approved for Fashion District Philadelphia, the relaunch of The Gallery at Market East. More heated complaints will inevitably follow. 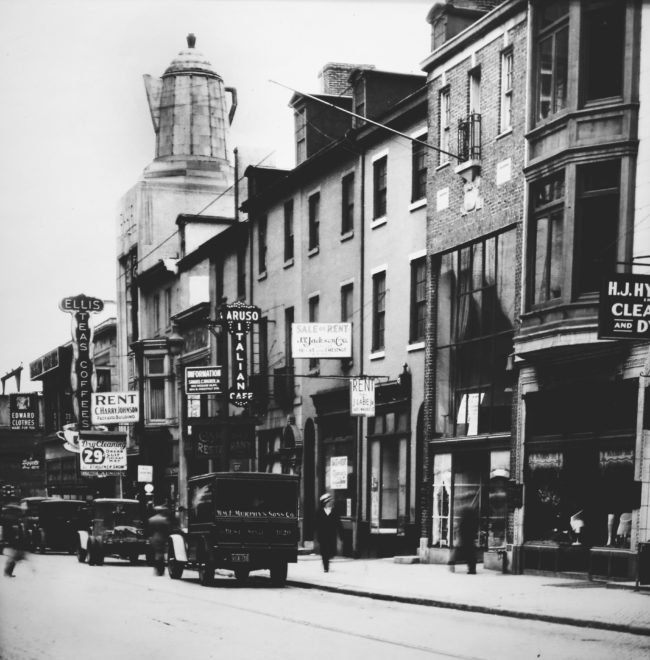 The giant coffee pot on the roof of the Ellis & Brother Coffee and Tea Company headquarters at 9 South 16th Street shortly after construction. | Image courtesy of Ellis Coffee Company

But today’s flashy ads are nothing new. Philadelphia has long had its share of bright signs and they certainly were not limited to Market East. There was even one piece of advertising that was not only ostentatious during the day and brightly lit at night, but could be SMELLED from blocks away.

In 1908, John Ellis purchased a 54-year-old coffee importing company he worked for and renamed it after himself. The Ellis & Brother Coffee and Tea Company opened a store in a long-demolished building at 205 South 11th Street selling imported coffee, tea, dried fruit, and nuts. In order to get his store noticed, Ellis had a giant metal coffee pot made and would place it on the sidewalk in front of his store whenever it was open. The big coffee pot became a hallmark of the company and the store became a hit. The company moved their retail operation into a larger space at 135 South 11th Street several years later. In the late 1920s, when it came time to expand into its own building, Ellis wanted to do something much better and much bigger.

Ellis commissioned the construction of a new headquarters at 9 South 16th Street. The building, completed in 1929, was a pretty nice example of early Art Deco with its simple lines and small embellishments on an Indiana Limestone facade. The building was the height of a four or five story building, but only consisted of two floors with 21-foot ceilings and mezzanines. The most noticeable and memorable part of the building was the giant coffee pot on the roof. 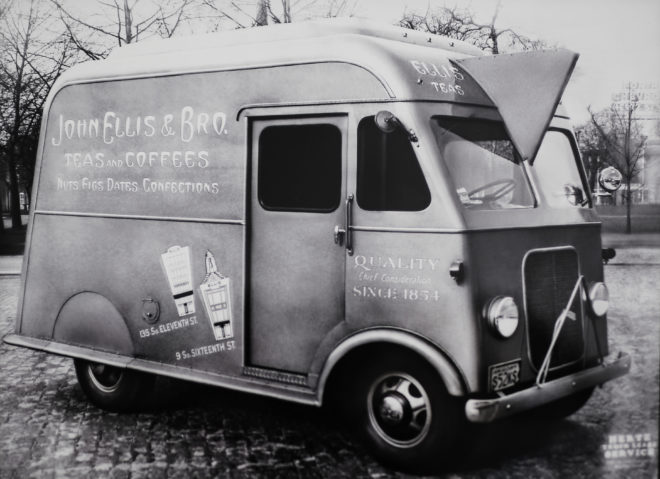 The Ellis & Brother Coffee and Tea Company truck that was roughly shaped like their giant coffee pot. | Image courtesy of Ellis Coffee Company

The coffee pot, conceived of by Ellis himself, was 22 feet tall and 12 feet wide at its widest point. It was made of reinforced concrete, covered in terra cotta, then covered again with chromium plates, standing on a terraced base. As if this gargantuan coffee pot wasn’t noticeable enough, Ellis developed and fabricated a system of pipes that would lead steam and smoke from the company’s roasting ovens through the spout of the giant pot. The scent of freshly roasted coffee would then carry itself to the surrounding blocks. The whole system was set to a clock that would discharge the steam and smoke at regular intervals. At night, the pot was lit up and was said to be visible from miles away.

The pot became a symbol of the company. Images of it appeared on their advertisements, correspondence, and trucks. Ellis even had a truck tricked out to look like the coffee pot.

In the 1940s, a large neon sign was installed around the coffee pot, making it even more of an attraction. From this location, Ellis & Brother Tea and Coffee imported and distributed its goods all around the United States and to customers in France, England, Germany, and Australia. They expanded their offerings to confections and candied fruits. 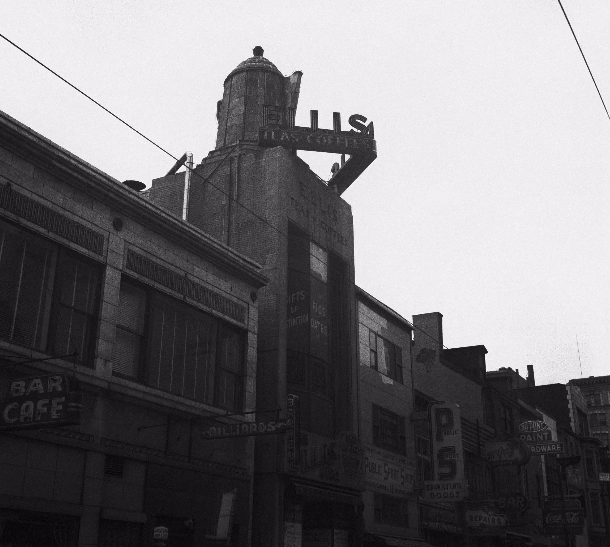 In 1952, Ellis’ employees went on strike for three months. The strike was a death blow to the business. Ellis sent out a letter to employees soon after the strike was over announcing that the 98-year-old company was going out of business. Harry Strauss and his son Bernard came along and purchased the company, keeping it alive and even expanding operations. The company still operates today as Ellis Coffee Company and distributes coffee all over the United States from its facility at 2835 Bridge Street in Bridesburg. Gene and Adam Kastenbaum, grandson-in-law and great-grandson-in-law of Harry Strauss, run the company. Several photos and a mural in their plant depict the giant coffee pot.

In 1969, the old headquarters of Ellis Coffee was demolished, one of an entire block of structures taken by the city through eminent domain for the construction of the Centre Square office complex. Adam Kastenbaum, president of Ellis Coffee, told Hidden City Daily, “We have no idea what happened to the coffee pot.” Although the company is actively researching its whereabouts, the fate of the giant coffee pot remains a mystery.