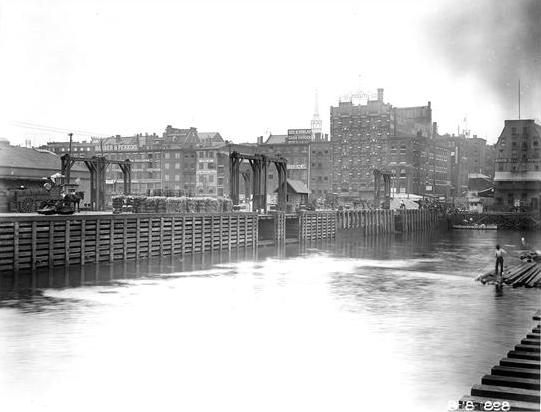 The John Hopkins Warehouse in 1898. The building, designed by Willis G. Hale stood out above the rest on the Schuylkill River waterfront in both height and character. | Image courtesy of PhillyHistory.org

Philadelphia is finally giving architect Willis G. Hale’s High Victorian masterworks the respect and care they have long deserved. After decades of dereliction and decay, the Divine Lorraine has been restored to its former grace. The Keystone National Bank Building AKA the Hale Building, is currently being renovated and restored after layers of alterations obliterated and obscured one of the city’s most brazen facades.

Hale was known for his eccentric style and nouveau riche patrons. He executed no less than 115 designs in Philadelphia. Today, only a handful remain. The majority of his work was homes, banks, hotels, and office buildings. However, he did execute at least four industrial buildings, only one of which still stands at 1010 Race Street. One of these industrial buildings, the John Hopkins Warehouse, was among his first commissions in Philadelphia. The building held a prominent place on the riverfront skyline for over 80 years until it was demolished to make way for Interstate 95. 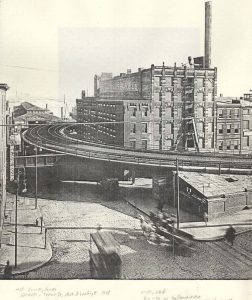 In the late 1870s, a young Willis G. Hale had just moved back to Philadelphia to start his own firm after cutting his teeth in Wilkes Barre. As a student, Hale had studied under the direction of architectural giants like John MacArthur Jr. and Samuel Sloan. When he returned to a Philadelphia, the city was dominated by the bold, muscular architecture of Frank Furness. Hale’s 1878 commission for a seven-story warehouse on the Delaware River at Arch Street was heavily imbued with Furnessian flair. The warehouse had a heavily decorated, multi-colored, stone-dominated facade complete with arches and finials on both the front and rear. This was a huge departure from the other commercial warehouses on the riverfront, which had much more sedate, utilitarian designs.

Known as the John Hopkins Warehouse in its early years, the building was sold to a Walter Sellers shortly after a fire in 1883. Sellers stored his most famous product, James Pyle’s Pearline Soap Powder, there through the remainder of the 1880s.

In the early 1890s, the Crowell & Class Cold Storage Company converted the building for cold storage and ice manufacturing. In 1895, prominent Philadelphia storage firm Fidelity Storage & Warehouse Company acquired the building for merchandise storage and commercial refrigeration. As if the building wasn’t noticeable enough, Fidelity installed a huge sign on the roof facing the river. The company specialized in the storage of fire-damaged goods for retail businesses recovering from fires. Fidelity would move damaged and water-logged goods to their warehouse, where they would treat merchandise in heated rooms by removing the smell from fire-damaged items and moisture from water-logged items.

At the turn of the 20th century, the Philadelphia Freezing Company moved into the building. The original Market-Frankford line’s Delaware River spur required a huge section of track to curve around the Hale-designed warehouse, allowing riders to enjoy the intricately detailed facade for the next 5 decades. In 1908, a fire charred a large portion of the river-facing facade, disfiguring on its southern half. 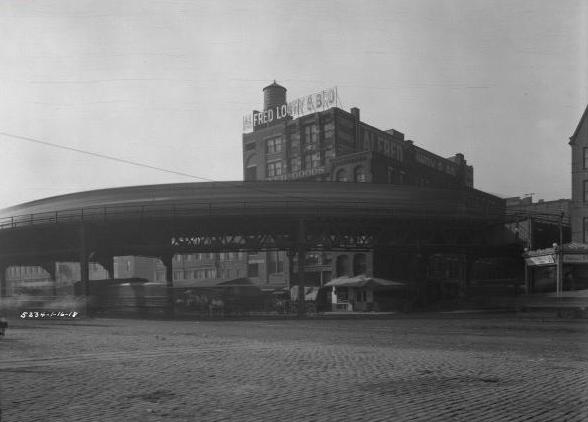 The Hale warehouse in 1918, then owned by Alfred Lowry and Brother Wholesale Grocers. | Source: Phillyhistory.org

The property’s last owner/occupant was Alfred Lowry and Brother Wholesale Grocers. The company installed an even larger river-facing sign on top of the building. The grocery business imported and distributed food to markets all over the region and would go on to create their own line of foods, beginning with Lowry Coffee and moving on to a variety of foods under the brand Tartan. The company moved to Camden in the 1960s, shortly after the elevated train curve was removed. The warehouse was next purchased by another local grocery distributor, Perloff Brothers. Through a series of mergers and acquisitions, the company exists today as part of Sysco.

In 1959, a long series of riverfront demolitions began to make way for I-95. The old John Hopkins Warehouse was unceremoniously demolished in 1963.