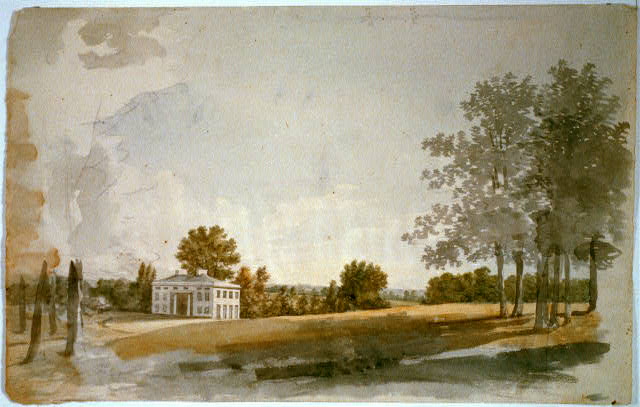 A watercolor sketch of Ury House by Benjamin Henry Latrobe painted in the late 1800s. | Image: Print and Photograph Division, Library of Congress

The story of the Ury House is a familiar one that mirrors the current wave of citywide demolition for new residential construction. The colonial mansion, located at 8403 Pine Road in lower Northeast Philadelphia, was believed to be the oldest historic dwelling in both Philadelphia and Pennsylvania. Originally a fort, the building, constructed around 1640-1645, was situated near what became the village of Fox Chase on a steep hill southwest of the Pennypack Creek. The mansion and adjoining estate were sold in 1973 to a real estate developer who demolished the historic home for a large tract of duplex apartments.

Ury House was built of stone quarried nearby by Swedish refugees who had sailed up the Delaware River and then the Pennypack in the early 1640s. It was said that the settlers arrived there by accident because they were sailing on the Delaware River during the evening and mistook the Pennypack Creek for their intended landing at Christiana, Delaware.

The Swedes quickly constructed a building of stone to protect themselves from the Lenni-Lenape, although they generally maintained friendly relations with local Native Americans. The stronghold also provided refuge when interloping Dutchmen from the Hudson Valley came down to the region to cause trouble. The Swedes used the structure as a fort, trading-post, and government house, since the settlers were scattered in huts and log cabins all around the dense forest that became Northeast Philadelphia. 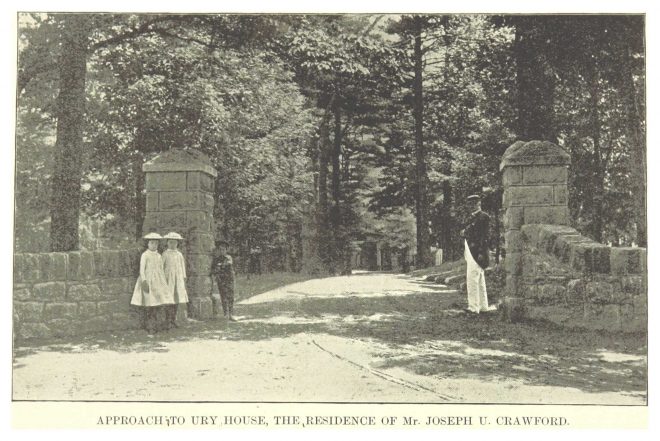 The blockhouse was the core of what eventually became the Ury House mansion. The approach from Pine Road was by a 400-foot long winding driveway with old-growth pine trees on both sides. A large peach orchard surrounded the concrete shelter, with cows and other livestock grazing about the grounds. Visitors entered through a monumental pillared porch and broad room, called Swedes Hall, with low rafters and a large fireplace. The mansion contained a square stone tower, under which was a cellar supported by stone supports. Swedes living in the surrounding woodlands would use a forge in the fort’s cellar to weld farm tools, mold lead bullets, and shoe horses. Ury House was so solidly built that when changes were made in 1899, dynamite had to be used to make even a dent in the masonry.

English colonists later took over the settlement and its blockhouse. Jacob Taylor, the surveyor general of Pennsylvania from 1725 to 1737, bought the estate in 1728 and added another wing to the house. He later sold the dwelling to Miers Fisher, a Quaker lawyer. It was Fisher who gave Ury (or Urie) House its name from the Scotch country seat of Robert Barclay, the Quaker theologian and author. Around 1795, Fisher made subsequent additions to the house, building parlors on the west side with new bedrooms above them. Ury House eventually had 23 rooms, making the former fort a genuine mansion in the woods.

A list of guests who arrived on horseback and were entertained by Miers Fisher and his wife included John Adams, Benjamin Franklin, and Thomas Jefferson. On the front lawn, Fisher planted a pecan tree given to him by Jefferson, which lasted until 1928 when it was felled by a storm. George Washington was another guest of the young couple. He slept in the mansion shortly after the evacuation of Valley Forge. One maid was so flustered by Washington’s presence that she accidentally sprinkled salt instead of sugar on a bowl of strawberries. The general ate them without saying a word. Benjamin Henry Latrobe also visited Ury House, as did painter Charles Willson Peale, who sketched the estate. Even John Audubon spent time at Ury in the early 1800s, beginning his famous artistic career by painting birds of the Pennypack Valley. 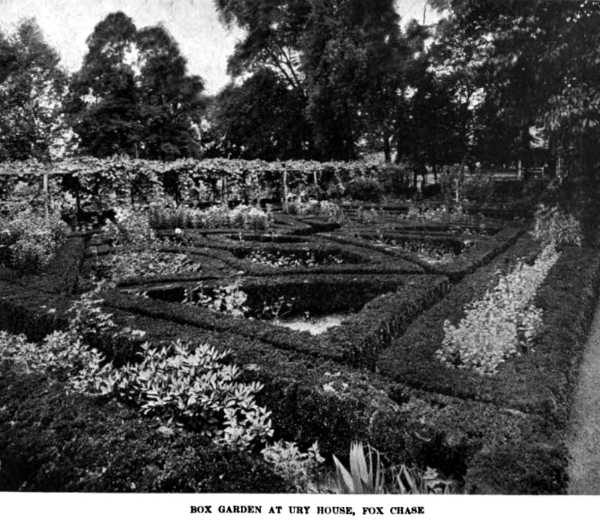 The box labyrinth garden at Ury House more than a century ago, now the center of a 1960s housing development. | From The Colonial Homes of Philadelphia and Its Neighborhood (1912)

The Ury House had a succession of owners in the 1800s. A Mr. Miller purchased the country seat in 1800. Captain James West later became the owner. Dr. Thompson Holmes bought the estate in 1835 for $14,000. Seven years later, it was purchased by Stephen Rowan Crawford for $15,500. He and his wife made further changes and additions to the residence, and their Scottish gardener laid out a labyrinth in the garden that was bordered by boxwood hedges. A great stone barn was on the property, and a tunnel linked Ury House to the Pennypack Creek. It was said that the tunnel facilitated the escape of runaway slaves, as the estate was also a station on the Underground Railroad.

Just before the Civil War, Stephen Crawford found himself in financial difficulties. His wife, Jane Crawford, began a money-raising venture at Ury House. In 1860, she opened a boy’s boarding school with the initial purpose of educating her six sons. But Ury House School soon became an elite educational facility for boys from elite Philadelphia families and others from across the nation and globe. Mrs. Crawford, who was regarded as a highly refined English lady, employed the finest headmasters and teachers in the Philadelphia region.

When Mrs. Crawford retired in 1881, the nationally-acclaimed Ury House School moved to Bustleton and became St. Luke’s Academy. The school next relocated to Wayne to become the Valley Forge Military Academy.

Following Mrs. Crawford’s death, Ury House was inherited by her son, Joseph U. Crawford, who had been born there in 1842. He served as a Union captain in the Civil War and became an officer for the Pennsylvania Railroad. Crawford was also a renowned engineer who oversaw the construction of the first railroad in northern Japan in 1878 on the island of Hokkaido. Emperor Kōmei was so grateful that he gave Crawford a medal and a ceremonial sword in appreciation for his work. Today, the site of Mikasa Station of Horonai Railway is now Joseph U. Crawford Memorial Park. Joseph Crawford returned to America and occupied Ury House as a private residence along with his four sisters and four brothers. He died there in 1924.

The Crawford siblings lived at the mansion until the property became too difficult for the remaining family to maintain. More than 100 tons of coal were needed annually to keep both furnaces going, and only five rooms were adequately heated. Plus, taxes on the estate were onerous. 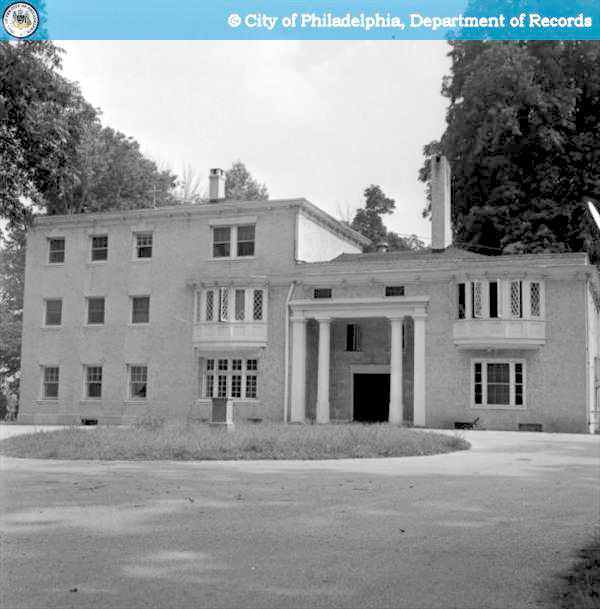 The Ury House in 1970, three years before demolition. | Image courtesy of Phillyhistory.org

After being in the family for over 100 hundred years, the last remaining Crawfords, all former Philadelphia Assembly debutantes, sold the 63-acre manor to the Medical Mission Sisters for $69,505 in 1945. They then moved to Coconut Grove, Florida, where they opened a hotel named “Ury Lodge.”

The Medical Mission Sisters was founded in Washington, D.C. in 1925 by a young Austrian doctor who had seen in India the sickness and death of Muslim women and children whose customs isolated them from medical care administered by men. Dr. Anna Dengel formed a group of female health care professionals who dedicated their lives to God and provide women with health care.

In the late 1930s, Cardinal Dennis Dougherty, Archbishop of Philadelphia, invited the Medical Mission Sisters to move their headquarters to Philadelphia. The Catholic organization purchased a large estate (the Ellingsworth Estate) on the west side of Pine Road, opposite the Ury grounds. In 1946, they expanded to the Ury property, converting the historic mansion into the St. Theresa Novitiate and Training Center, a school for nuns that served as medical missionaries around the world.

The land around Ury House was still forest and farmland at that time. In addition to tending to their ministerial duties, the nuns grew corn and strawberries and raised pigs and chickens. The Medical Mission Sisters are still located on their original plot of land on the west side of Pine Road, a property that remains the organization’s North American headquarters. From there, the nuns operate the Medical Mission Sisters Thrift Shop, which offers new and used clothing and household items.

By the 1960s, the Medical Mission Sisters could no longer pay to maintain Ury House or the surrounding estate. The old mansion needed constant repairs. The nuns sold off the eastern 40 acres of the property facing Verree Road. Some 400 twin homes were constructed there in the mid-1960s. This was around the peak of Northeast Philadelphia’s development, which was a prime example of post-WWII growth. In 1970, the remaining 24.8 acres of the Ury estate were vacated and put up for sale. Despite modest efforts to protect the mansion, it suffered vandalism and was ultimately torn down in 1973 for a large residential community, the Montclair Duplex Apartments.

The Ury House could have been converted back into an immersive educational facility set deep in the woods of Northeast Philadelphia. Alas, the prominent hill upon which mansion stood is the only thing left of the Ury estate. While an original wall still might still peek up here and there within the Montclair development, not even a historical marker denotes this once-storied mansion that was known by so many important, influential Americans and underwent so many noteworthy uses.