The True Center Of The City Revealed 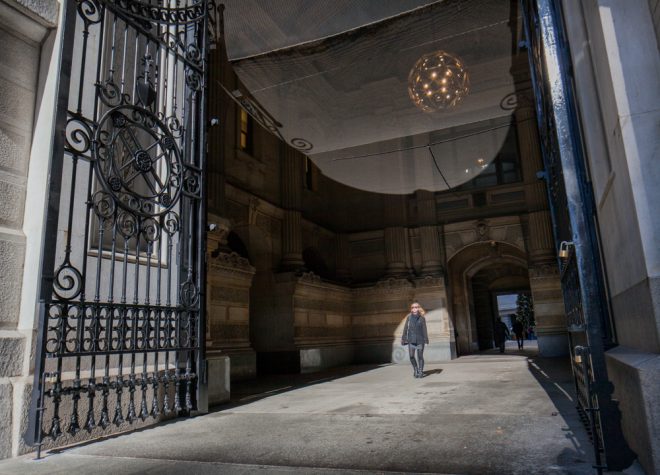 City Hall has an uncanny gift for making people feel like they are standing in the middle of the city, and indeed that was once true. Today, though, it is geographically false. | Photo: Michael Bixler

“The heavy grandeur of City Hall at the center of Philadelphia’s conservative skyline, the grand sweep out from it of Broad and Market Streets and the Benjamin Franklin Parkway, this concentration of skyscrapers at the center and these avenues of escape outward immediately give an impression of a sort of spaciousness and grandeur.” These words, written by Nathaniel Burt, appear in the introduction to Philadelphia Discovered, published in 1964. The book of photographs are from a time when urban renewal efforts were reshaping historic Center City into a bold, cold commerce hub and no one dared to build above the watchful eye of William Penn staring down from City Hall.

While Philadelphia’s great municipal palace is indeed at the center of Center City, and continues to dominate our the city’s growing skyline, City Hall is not at the true center of Philadelphia. Inspired by Ann de Forest’s 2016 Hidden City Daily article, “I Walked the Line: Exploring Philadelphia’s Borders One Step At A Time,” a fascinating piece that explores the encompassing borders of the city, I examine the idea of the true center point of Philly and the city’s unique history of being the center of attention.

Most of the east-west streets were named after native trees: Vine (initially Valley Street, and the original northern border of the city), Sassafras (now Race), Mulberry (now Arch), Chestnut (or Chesnut), Walnut, Spruce, Pine, and Cedar (now South Street, the original southern border). High Street—now Market Street, because of all the food stalls that once ran down its middle and sides—was in the middle of these streets as the main street of the city. The intersecting streets were numbered from both the Delaware and the Schuylkill Rivers to Broad Street. The western streets were distinguished by the prefix of the word “Schuylkill,” as in “Schuylkill Front” (now 22nd Street), “Schuylkill Second,” and so on. In the original plan, Broad Street bisected the city along current-day 12th Street, as this line was thought to straddle the demarcation of the watersheds of the Schuylkill and Delaware Rivers. In 1733, it was relocated two streets further west. 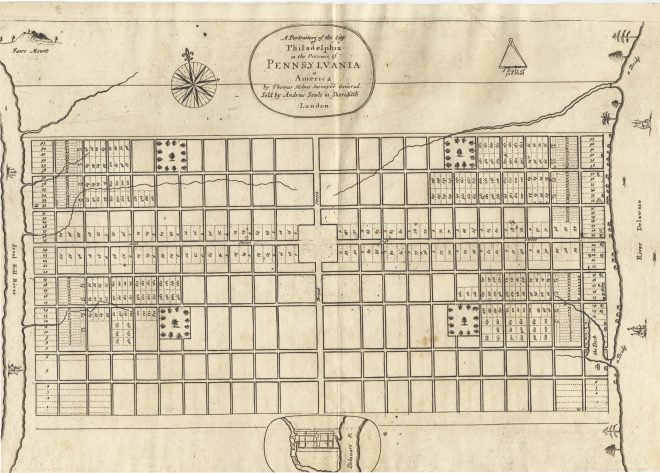 Each quadrant of the city contained a square or commons of about eight acres at its near-midpoint for public uses. Plus, the middle of the overall rectangle had a public square of 10 acres called Center Square, where City Hall stands today. William Penn’s Surveyor, General Thomas Holme, believed, as he had with 12th Street, that this open space was located at the watershed dividing the city’s rivers, but his calculations were off by a couple of blocks. Surveyors later corrected Holme’s error and moved Center Square to where it is today. The Pennsylvania Convention Center now occupies the site of that original square.

Center Square, now called Penn Square, had a long history before City Hall was ever erected on that plot of ground in the late 1800s (although the notion of constructing the city’s “Public Buildings” there was contemplated by William Penn). Center/Penn Square was formerly a site for a Quaker meetinghouse, a horse track (the first horse race track in America, the Centre Square Race-Ground), a parade ground for George Washington’s troops, a place for public hangings, and the location of the city’s first waterworks, built in 1801 and torn down in 1829.

This was the plan of the city—the first planned city in America, characterized as one of the earliest attempts at utopian city planning. The scheme is still adhered to these days, with the rectangle making up the so-called center of town, Center City. The 2.07 square mile core of Philadelphia is the second-most populated downtown area in the United States.

Philadelphia’s innovative design is surely a large part of its success as a major American metropolis. But even more important was the city’s establishment midway along the Atlantic seaboard along which the 13 colonies were spread. Since the city was on good terms with both the North and the South, people from northern and southern colonies felt at ease visiting and meeting in Philadelphia. They regarded Philadelphia as a region that was not only neutral, but also friendly. As a result of this favorable placement, the City of William Penn became the commercial and financial capital of North America in the 1700 and 1800s. 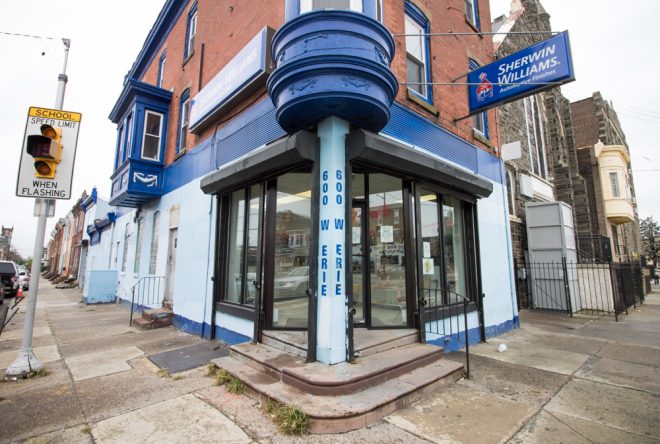 It so followed that Philadelphia became the political capital of North America, as well as the “Athens of America” in the late 18th and early 19th centuries. Philadelphia is the only American city that has been, simultaneously, the country’s political, business and intellectual hub. From early on, the city highlighted its unique central status, referring to itself as “The Birthplace of the Nation” and “The Convention City” due to its role in the creation of the nation and the national government. It is no wonder that Philadelphia was also the beginning the Mason-Dixon Line and the start and end point of the Lewis and Clark Expedition.

On February 2, 1854, Pennsylvania Governor William Bigler signed a law consolidating 29 municipalities and districts of Philadelphia County into one large city. The Consolidation Act of the City and Country of Philadelphia (1854) was the first instance of the modern method of making “greater cities” in the United States. Until then, nine incorporated districts, six boroughs, and 13 townships existed in Philadelphia County, including the city of Philadelphia. The affairs of these municipalities were so interrelated as to make the county a unit socially and economically, thus making consolidation inevitable.

The City of Brotherly Love ballooned from two to 129 square miles in 1854, the largest American city at that time as measured by territorial area and second only to London across the Atlantic. Today, the size of modern day Philadelphia is 135 square miles. As such, the city of Philadelphia occupies a bit more ground space than the cities of Boston (about 48 square miles) and Baltimore (about 81) combined.

But back to the true geographic center of Philadelphia, which, as previously mentioned, it is not at City Hall or anywhere near Center City. It is approximately at 6th and Erie Streets in North Philadelphia. This would be the spot where the city could be perfectly balanced on a pin. The exact center point of our grand, sprawling city appears to be a Sherwin-Williams Automotive Finishes paint store at 600 W. Erie Avenue.