It was midmorning at Hall-Woolford Tank Company in Olney. A Nissan flatbed truck with the words “Isseks Brothers, 298 Broome St., NYC” on its sides clattered into the garage bay of the tar-roofed mill building. The driver whirled through a warren of lumber stacked neatly outside at breakneck speed. Just as quickly, two men scrambled aboard the bed of the truck. A forklift, roused from slumber, growled and screeched across the yard shuttling neatly banded sheaves of lumber to the men as they hustled to stack the wood like a frenzied game of Tetris. This was what was called in the business a “knocked down tank,” general manager Jack Hillman explained as the faint hint of Alaskan yellow cedar wafted through the shop. 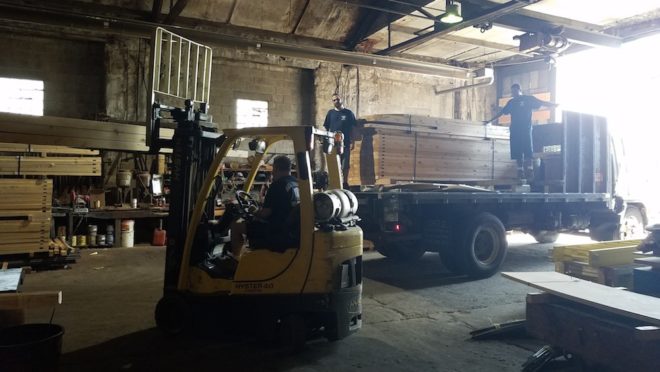 Despite the feverish activity on the truck, the passage of time seemed to clot and thicken at Hall-Woolford. The shop was filled with ancient and perplexing implements–most still functional. Back in the gloom of the building sat a hulking, multi-bladed steel saw caked with residue, some fresh. At nearly a century old, the blade’s appetite for lumber was undiminished. Off to the side, above a jaundiced American flag, hung the shaftwork of an overhead pulley power system long out of service. Steam driving leather. Embedded in the concrete floor was a half-moon shaped extruder for bending long threaded rods like linguini. Only the distant sound of WMGK cranked up to top volume on the radio moored the scene in the present.

The men’s victory howls slowed as a dense block of tightly stacked wood appeared on the flatbed nearly in line with the cab’s roof. The entire process took about 30 minutes. This truck would soon be racing 90 miles north to the site of the brand new 222 E. 44th Street luxury highrise in Midtown Manhattan. There, skilled millwrights with Isseks Brothers would disassemble the chunk of cedar back into portable sheaves to be hauled up through the building. No cranes required. On the roof, the millwrights would painstakingly coax the pieces together–all without glue–into one of the most iconic features of New York City’s skyline, the wooden water tank.

A Colladay and Bro. anvil from the 1880s still serving as a desk. | Photo: Chris Dougherty

Hall-Woolford Tank Company began in 1854–the year Philadelphia consolidated its 28 unruly parts into one municipality and county. From inside a tiny, windowless office on Water Street, Hillman manages the operation in a way founder Amos Hall would have recognized. Hall-Woolford’s office workflow is still heavily paper-dependant. Up until a couple of years ago, Hillman drafted all the construction drawings which now erupt from flat file cabinet. Out on the floor, an 1880s-era anvil still serves as a desk. Stacks of accounting ledgers in an adjacent room log sales with firms like Disston, Baldwin, and Quaker Lace. Pink “While you were out” telephone message sheets blanket Jack’s desk. The phone rings constantly. When a wealthy client desires a wooden water tank erected “like the old days” for his personal railyard Hillman reassures him, “We are the old days.”

A carpenter with sawdust in his veins, Hillman is quick to get into the wood. While he spoke fondly about the piles of salvaged redwood outside, his pace quickened when he spoke of the almost mythical red cypress cedar. Prized because the logs were pickled deep in Florida’s brackish tidal waters, often for centuries, red cypress is the most decay-resistant species Jack has seen. He has doggedly pursued the wood, once hiring an old sawyer to dredge some Florida marshes in search of a trunk felled by a hurricane some 700 years ago. Today, because East Coast stands of Atlantic white cedar are so depleted, Hall-Woolford orders a train car load of Alaskan yellow cedar from British Columbia every quarter. 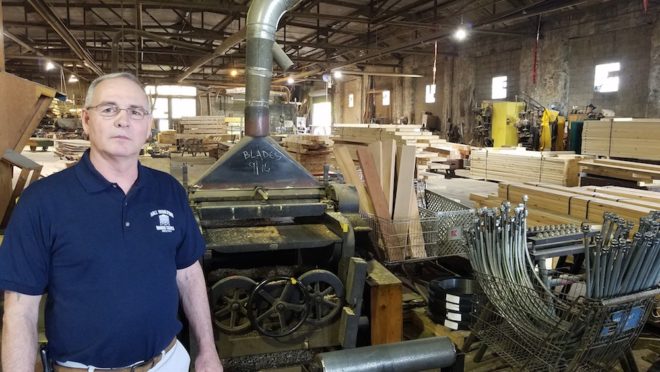 Some may confuse the wooden water tank as a nostalgic folly, likely because outside of cities they are only seen in amusement park depictions of the Wild West. And while steel and plastic tanks are possible, no one has found an easier way to get a decay-resistant, insulated water tank capable of supplying 40,000 gallons higher than 100’ up in the air than to carry it in sheaves and assemble it on the roof like an Amish barn. This logistical reality, coupled with the hydraulic fact that the head of pressure of New York’s water only reaches about 80 feet up, means that even at the apogee of the financial meltdown Hall-Woolford was shipping 70 to 90 tanks a year to New York. Based on an inventory of buildings taller than seven stories, there are 12,000 to 17,000 tanks gracing New York’s rooftops. Numbers like these allow chronicler of New York’s infrastructure Kate Ascher to write unflinchingly, “New York City is not the only city in the nation to feature water towers, they are more prominent here than almost anywhere else.”

By the 1990s, the wooden tank industry was sagging. Weakened by aggressive marketing of water pumps, tank companies were increasingly turning to plastics. Back then, Hillman had counseled owner Harrison Hall to stay the course and double down on wood. By the time hot tubs and bourbon were getting popular again, high rise construction picked up in New York and Hall-Woolford was glad they hadn’t changed their ways. Today, their product is especially prized by exacting distillers. Four Roses and Makers Mark bourbon kissed by Appalachian white oak, Jose Cuervo’s tequila ensconced in oak. Our own Philadelphia Distilling’s Bluecoat Gin ruminates in a Hall-Woolford tank. Food scientists and industrial chemists like just the right wood, too. Old growth Douglas firs with a pH to resist vinegar’s acids or McIlhenny’s hot sauce. Tanks that can hold up to the caustic solution used to dye Big Bird’s feathers yellow. And Hall-Woolford can do the Wild West thing too: they built the centerpiece tank for Santa Fe’s Railyard Park. Made in Philadelphia, Hall-Woolford tanks crown the new World Trade Center. Jack said that the Hall-Woolford tanks at Citi Field have a couple of choice messages from Philly scrawled inside for Mr. Met. 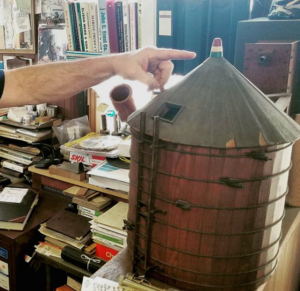 As we meandered around the shop, Hillman’s rough carpenter’s hands bound along the orderly banded stacks coded and ready for shipment. Feel is important with a pliant material like wood. You are always looking for what Jack called a “dead joint”–a satisfying connection you can sense in your gut. Workers are always expected to “cull out” errors or imperfections in the lumber. Off a fraction of an inch and you reduce the tank’s capacity by hundreds of gallons. Hillman seems to read people the same way: always checking to see if everything lines up true. He hired one of the guys wrangling wood on the back of the truck, AlCo, because he stopped his bike at a red light. “I figured that’s a guy who doesn’t run the red is a good person, so I asked him if he needed a job. And he did, he started the next day and he’s been with us four years.”

Through persistence, consistency, and market responsiveness, Hall-Woolford has survived as a prototypical, 19th century Philadelphia craft firm. They employ only seven workers. With Hillman’s son, Ed, working in the shop, they still retain that generational intimacy emblematic of non-corporate, family-based Philadelphia capitalism. The way AlCo was hired typifies an almost pre-industrial familiarity and mutual trust between artisans and management. The proliferation of small, specialized firms in textiles, metallurgy, tool-making, pharmaceuticals, shipbuilding, locomotives, and brewing created a very balanced employment portfolio able to weather sectoral downturns, unlike Detroit’s almost singular reliance on automobile manufacturing. Short of a time machine, walking through Hall-Woolford’s shop is probably the closest we’ll get to experiencing the city’s vaunted Workshop of the World.

Out in the yard amid the piles of fragrant hardwood, I ask Hillman how he came to run the company. “I was asked to many years ago.” “By whom?,” I ask. “I’d rather not say,” he averred. 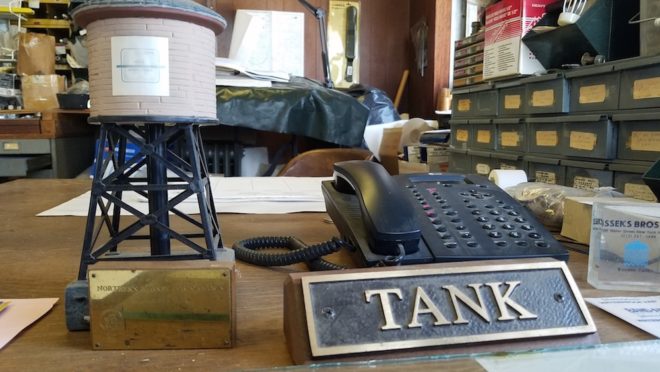 This was the first inkling that perhaps this was not a tenacious company clawing its way through time with an unflagging devotion to craft quality. Then I recalled the truck. Isseks Brothers is one of a few tank construction companies still plugging along in New York. I soon got the sense that Hall-Woolford was not an independent supplier brokering with tank construction firms. Clearly, there were larger forces at work here. Like so many who believe in the possibility of an American industrial resurgence as an article of faith, I wanted badly for Hall-Woolford to represent the triumph of an older, more placid economic order outside of annihilating corporatism.

We went back inside and passed a stack of perfectly cut staves marked for 130 E. 82nd Street, the new Moise Safra Community Center in the Upper East Side three blocks off of Central Park. Hillman and AlCo probably didn’t care about shadowy, out-of-state ownership groups. It wasn’t the first time a satellite city served a higher order settlement and it won’t be the last. I resigned myself to the realities of the marketplace. In that moment, all I really cared about was that every day, millions of people in a cosmopolitan global city drank water from wooden tanks made in Olney by good guys who stop at red lights.