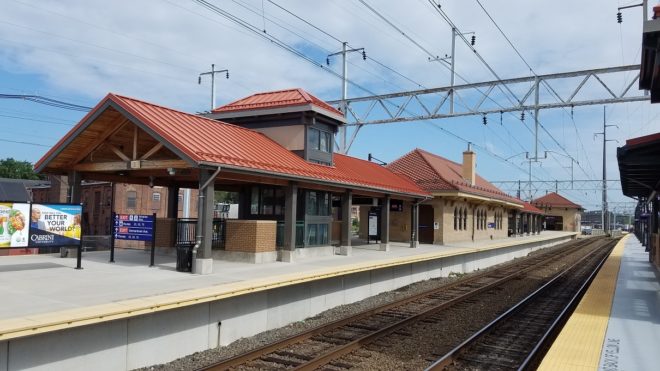 A portion of the newly renovated and modernized Wayne Junction Station. | Photo: GroJLart

Wayne Junction, the border between Nicetown and Germantown, is on the cusp of revitalization. Local business owners, nonprofit organizations, and City agencies are joining forces with developer Ken Weinstein to reinvigorate this important transit hub with transit-oriented real estate development. On Tuesday, Weinstein presented his plans for the Wayne Avenue Revitalization Project to a 100-strong crowd inside the shell of the former Blaisdell Pencil Company on Berkley Street.

Weinstein’s real estate development company, Philly Office Retail, has been lauded for its neighborhood-focused projects that provide affordable work space for non-profits and have helped reactivate underutilized areas of Mount Airy, Germantown, West Philly, Norristown, and Upper Darby. Weinstein’s Jumpstart Germantown initiative educates aspiring developers in the ways of home renovation and residential sales. In this way, Germantown gets revitalized by locals instead of big-time developers.

Philly Office Retail has already absorbed the old William Adamson property at 4811 Germantown Avenue into the Wayne Junction Campus, a four-building complex now holding 14 businesses and over 100 jobs. Philly Office Retail will be rehabbing seven more nearby properties including:

“From a Hidden City perspective, its important that we are not demolishing anything. Its important to keep the fabric of the neighborhood intact,” said Weinstein. The developer also presented other properties in the area that he does not own, but is either working to acquire or working to achieve conservatorship of. Weinstein made it clear that the revitalization plan “is the start of the process, not the end of the process.”

In addition to plans for the properties mentioned, Mosaic Development Partners is planning a large project called Golaski Park in the former Bearing Products Company at 4567 Wayne Avenue. Here, the real estate firm is planning a $6 million, 40,000 square foot mixed-use development that will include a new location of High Point Cafe, a restaurant and community-oriented culinary space curated by celebrity chef Sylva Senat, a maker’s space for artisans, and a second location of Read Ready, a local daycare.

In her presentation, Mosaic Development Partners representative Leslie Smallwood-Lewis made a point of stating that Mosaic is not aiming toward gentrification, but “genegration”, a portmanteau of gentrification and integration. “We are adding a level of diversity to development to the city of Philadelphia. You don’t see African Americans developing in the city that often, so that is our mission as well.”

Others involved with revitalization project include the nearby Wayne Mills Company, Nicetown CDC, Germantown United CDC, the Philadelphia Water Department, Mural Arts Program, the Philadelphia Department of Commerce, and Fairmount Park Conservancy, which will soon lease the old Loudon Mansion in the neighborhood to a nonprofit. 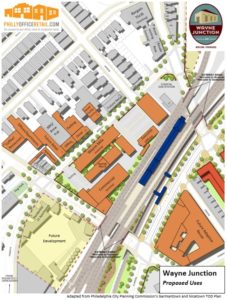 In a way, transit oriented development surrounding Wayne Junction brings the area back to its roots. In the late 19th and early 20th centuries, the convenience of the station led to the development of industrial buildings all around it, allowing thousands of workers to commute in every day from all over the city. Workers who lived nearby at the time could potentially use the station to travel to all corners of the United States.

Wayne Junction station was built by the Reading Railroad in 1881 under designs by Frank Furness and was reconstructed into its current form in 1901 by Wilson Brothers. It was created to be an answer to Pennsylvania Railroad’s nearby North Philadelphia Station.

It’s been a long time since “more trains stopped there than any other station in the world,” which was never true, no less than six regional rail lines stop there today along with two bus lines and one trackless trolley line. In 2011, SEPTA committed to a $30+ million restoration and renovation of the station that was completed at the end of 2015. In addition to making the station ADA compliant, the century-old buildings and canopies were restored to their original beauty, while providing technological upgrades and environmentally friendly features.

The renovation of the station, along with the designation of the Wayne Junction National Historic District on the National Register of Historic Places in 2012, led to investment by local developers in the nearby industrial properties that had become derelict over the last several decades. Ken Weinstein was the first to take advantage, buying the old Schaeffer School in 2011 and the Max Levy Autograph Building in 2012. Weinstein has added more local properties to his portfolio over the last several years. These investments, and those by Mosaic other firms, offer a promising future for revitalizing Wayne Junction.