Inside Northeast Philly’s Temple Of Ryerss 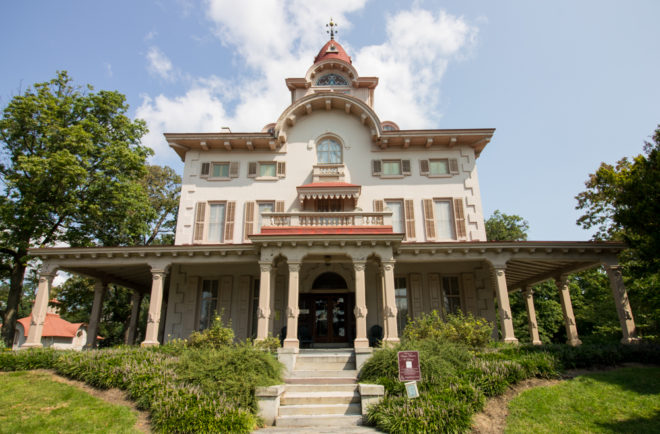 The Ryerss mansion in Burholme Park, once the summer home of Joseph Waln Ryerss and family, is now a unique house museum and community library run by year round staff and the Department of Parks and Recreation. | Photo: Michael Bixler

The Ryerss Mansion, located in the Great Northeast’s Burholme Park, is an extraordinary house museum that you’ve likely never heard of. The property, a 158-year-old family summer home left to the City by the Ryerss family, is a genuine, hidden gem, and not merely for its ornate, Victorian architecture. The house displays an astounding, eclectic collection of paintings, sculpture, family heirlooms, and a vast array of Asian art and artifacts. The attached community library, unconnected to the Free Library of Philadelphia, has a wide variety of current best sellers, children’s books, and non-fiction works. Owned and operated by Philadelphia Parks and Recreation, the eccentric museum’s mascot is a stuffed American alligator calling card holder they call “Snapper” that stands at attention in mansion’s dining room.

Collecting a Legacy, a Gift to the City

Joseph Waln Ryerss was a descendant of Nicholas Waln, one of the original Pennsylvania Quakers to settle in Philadelphia with William Penn in 1682. Joseph was in the import/export trade business, dealing primarily with the Middle East and China. He also served as president of the Tioga Railroad and president of the Philadelphia Exchange. He married his second cousin, Susan Waln, but she died a year after their son Robert was born in 1831. Joseph then married Susan’s sister, Anne. He lived with his first and second wives in a downtown mansion that once stood at 922 Walnut Street. 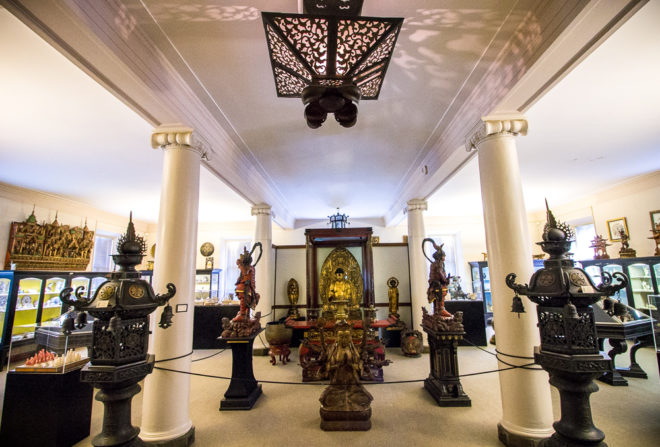 Joseph established his summer retreat on 85 acres of secluded land in 1859. He built an Italianate-style mansion, named Burholme, on top of the highest hill in what was then the northeastern reaches of Philadelphia County. High vantage points like this were desirable places on which to build one’s summer estates in the 18th and 19th centuries. From the dwelling’s cupola, one can clearly see Center City in the distance on a clear day.

The Ryerss estate surrounding the mansion is now called Burholme Park. “Burholme” means “home in a wooded setting” according to Ryerss family tradition. The park is in the Fox Chase section of Northeast Philadelphia, near the corner of Cottman and Central Avenues. The site is directly south of Jeanes Hospital, which makes sense, as Joseph Ryerss bought much of the property from the Jeanes family.

Upon Joseph’s death, Anne and her stepson moved to Burholme and made it their year-round residence. Robert, who had obtained a law degree from the University of Pennsylvania, never practiced law, but preferred instead to travel and collect treasures for the manor house at Burholme. Eight months before Robert died in 1896 at age 65, he shocked his family and Philadelphia’s high society by marrying his housekeeper of 27 years, Mary Ann Reed. Childless and in poor health, Robert bequeathed Burholme to Mary Ann, along with a comfortable annuity.

Mary Ann married Dr. John Bawn, a local Episcopalian minister, three years after Robert’s death. Robert’s will stipulated that upon Mary Ann’s death, the estate was to be turned over to the City of Philadelphia to be used as a public park, museum, and lending library—”Free to the people forever.” This is the mission of the historic mansion today. The Friends of Ryerss, founded in 1974, is a community group that assists Fairmount Park in caring for the mansion and furthering the museum’s mission. 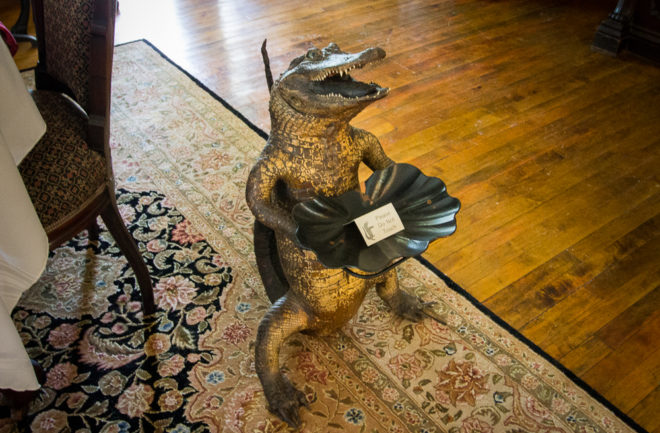 Mary Ann turned the 48-acre Burholme estate over to the City of Philadelphia in 1905. The mansion was placed in the charge of the Commissioners of Fairmount Park by an ordinance approved on July 27, 1905, and was placed on the City plan by confirmation by the Board of Surveyors on November 11, 1905. Mary Ann moved with her second husband to a smaller house on the property at the intersection of Oxford Avenue and Verree Road. The Ryerss Museum and Library opened to the public in on May 14, 1910.

Mary Ann and her second husband continued the Ryerss tradition of traveling around the world, buying art and curios from China, Japan, India, Syria, and other countries. Upon Mary Ann’s death in China while on a collecting trip in 1916, Revered Bawn returned to Philadelphia and saw to carrying out his predecessor’s (i.e., Robert’s) plans. The walls of the mansion’s second floor bedrooms were removed the create an open area for the library. Realizing that the Burholme mansion could not possibly contain all of the objects the Ryerss family collected from all corners of the world, Bawn petitioned the City to build an extension to the mansion. By 1923, the museum’s large, two-story gallery space was completed.

An abiding love for animals ran in the Ryerss family. Anne Waln-Ryerss’ father, US Congressman Robert Waln, donated $10,000 toward the establishment of the Pennsylvania SPCA in the 1860s. His daughter Anne was an advocate for the welfare of animals, especially horses, and left $30,000 in her will to found the Ryerss Farm for Aged Equines and endowed $40,000 for its maintenance. She was known to have stopped at least one tired horse in the middle of the street to persuade its owner to bring it to the Ryerss mansion. Anne’s son Robert was instrumental in helping create the Pennsylvania SPCA and was the organization’s first president. Robert Ryerss was also involved with establishing the Morris Animal Refuge. 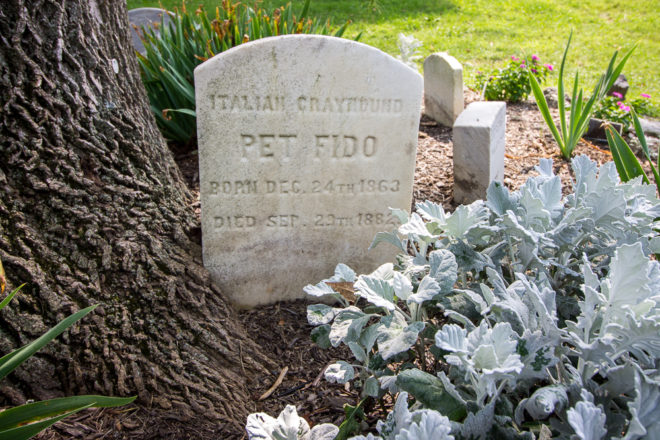 Ryerss Farm was originally located on an 80-acre farm at Meeting House and Krewstown Roads in the Bustleton section. It is now on 383 acres in Pottstown, Pennsylvania. Ryerss Farm is the oldest non-profit retirement community for horses in America, established in the days when horses provided much of the power for transportation in the city. Ryerss Infirmary for Dumb Animals, as it was originally named, was incorporated as a charitable institution whose objective was, according to their mission statement, “to provide a permanent home for old favorites whose owners, instead of destroying or selling them, desire to place them under good treatment for the remainder of their days.”

There is plenty of evidence of the family’s love of animals at the mansion, not the least of which is a small dog cemetery with poignant headstones. Some of the Ryerss’ favorite dogs are also depicted in oil paintings that the family commissioned of their beloved animal companions. These works are hung around the library along with a portrait of Old Grey, the family’s favorite horse. Old Grey is also buried on the grounds of the estate, but the gravesite has since been lost to history. 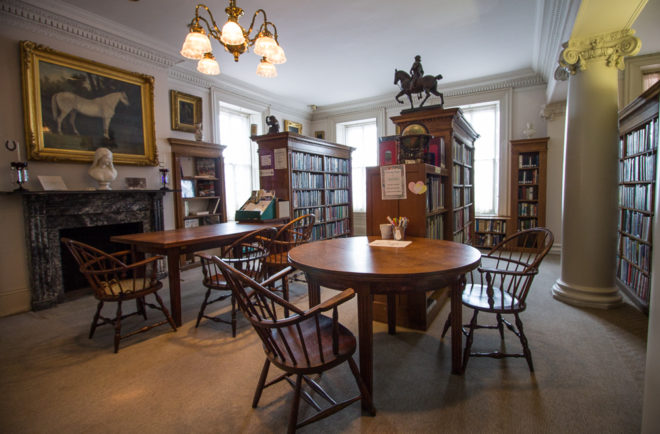 Within the mansion’s cupola, a group of double-hung full stained glass windows and two half-round stained glass windows are now in the process of being restored, as the elements, up so high on the hill at Burholme Park, have been cruel. The Friends of Ryerss are fundraising money for the expensive work, which is being carried out by conservators of the Fairmount Park Conservancy and Beyer Studio, Inc. of Germantown. The museum is currently accepting donations for the work and occasionally offers cupola tours to visitors for $5.

The Ryerss Museum and Library, at 7370 Central Avenue is open only three days a week– Fridays, Saturdays, and Sundays from 10AM-4PM. Admission is free, but donations are welcome. For more information, check out their website HERE.