The Thrill Is Gone: On Leaving The Waterfront Behind 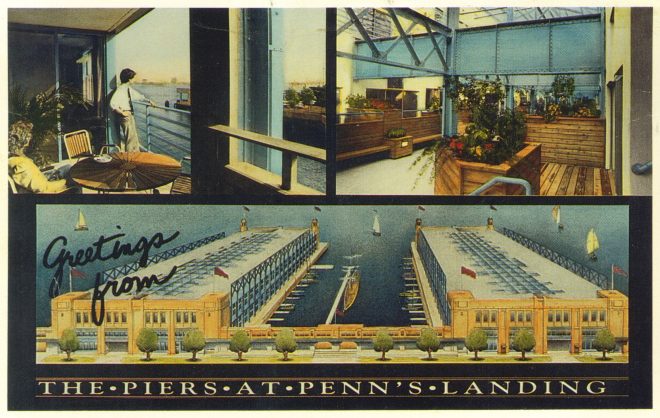 Readers of my column will note that I haven’t written much for Hidden City lately. I have been busy packing my stuff and moving out of the city. Yes, I am now, once again, a suburbanite. A shiny, new resident of Bristol, Pennsylvania, to be exact. I am sad to report that, for me, the thrill of living on the Delaware River waterfront had become an ambivalent “meh.” My excitement over living on the river that began 20 years ago, when I moved into the city from the suburbs, is over. The tide has officially turned.

In 1997, I purchased a unit at Pier 3 Condominium, located at the foot of Market Street next to Penn’s Landing. Pier 3, and its placement along the Delaware River, electrified my growing interest in Philadelphia, its history, and the waterfront. Living at Pier 3, a former warehouse pier from the 1920s, inspired me to write several books about the city, including Philadelphia’s Lost Waterfront.

I was ultimately drawn to Pier 3 by an exciting plan to redevelop Penn’s Landing. Around 1997, Simon Property Group proposed a $200 million Penn’s Landing Entertainment Center. It would have installed retail shops, restaurants, a 3,000-seat amphitheater, two ice-skating rinks, and a 15-screen movie theater. The Simon Property plan seemed like a sure bet when I was looking to buy a condominium at Pier 3. I was seduced and sold on the idea. It made living on the Delaware waterfront an extremely attractive prospect.

But the Simon Property proposal went nowhere, other than the drilling of a few test bores to check the firmness of ground under Penn’s Landing. After five years of talk, talk, and more talk, Simon Property’s grand plan was abandoned in 2002. Those of us who bought into the waterfront because of the ambitious plan were left high and dry.

Enhancements to Penn’s Landing have been proposed for decades, the first batch in 1973 for a complex of office and apartment towers. Several other grandiose schemes were offered and withdrawn since then. Economic downturns and bungling bureaucracy aside, the canyon of I-95 has been the main arsenic for killing redevelopment proposals along the Delaware River. Columbus Boulevard, with its prohibitive six lanes of dangerous, racing traffic, has not helped matters.

Earlier this summer, the Delaware River Waterfront Corporation announced that has been secured to reimagine Penn’s Landing, beginning with a $225 million cap over I-95 and Columbus Boulevard. The plan includes four major components: A four-acre lid over I-95 and Columbus Boulevard between Walnut and Chestnut Streets, with a new skating rink, spray pools, a café, and other public uses. Eight acres of civic space between Walnut and Chestnut Streets. An extension of the pedestrian bridge at South Street. A two-mile section of the Delaware River Trail, from Spring Garden Street to Washington Avenue.

I have been aware of these plans for some time, but they were not yet set in stone when I put my condominium on the market last year. After hearing that the DRWC had secured most of the funding, I began wondering if I should have stuck it out at Pier 3. “Think about the value of the place in a few years,” I said to myself.

However, the Simon Property plan, which seemed like such a sure thing 20 years ago, did not pan out at all. I also cringe at the thought of a multi-year construction project right outside my front door. According to the DRWC, the design and permitting for the new Penn’s Landing plan will be secured by 2019, and construction is estimated to take at least three years.

As painful as the decision was, I kept coming back to the same conclusion.

Who would want to buy a condo in the middle of a noisy, chaotic, construction site? Best to sell now.

Pier 3’s fees and special assessments are getting out of hand, with more assessments on the way as the aging building requires increased maintenance. Best to sell now.

What about rising sea levels? The Delaware River’s tide already rises six feet per day. In 50 years, will Pier 3 be totally uninhabitable? Best to sell now…

The capping of I-95 and Columbus Boulevard will be a major engineering feat if it actually happens. Call me cynical, but, after all of the wonderful plans for Penn’s Landing that have come and gone, I am not so confident that this new plan can, or will, come to fruition. 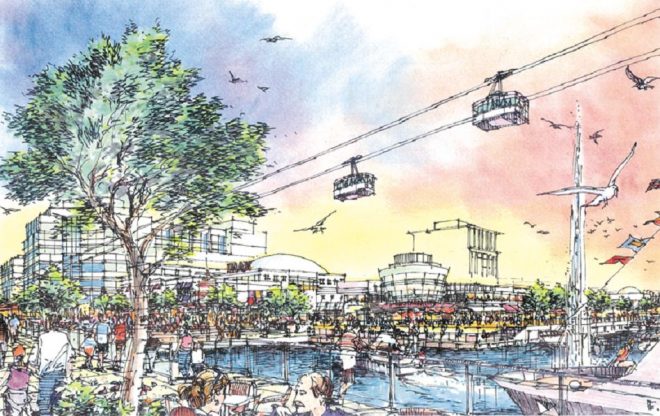 The best example of funded failures on the Delaware waterfront is the never-completed Skylink Aerial Tram to Camden. We are still reminded of this doomed project by the barren, Pi-shaped concrete arch near the river between Market and Chestnut Streets. The arch was built as tower support for a cable car transport system that would have whisked as many as 2,000 people an hour across the river in gondolas. The Delaware River Port Authority spent nearly $13 million building the structure and its counterpart in Camden before work ceased in 2003. The project died after controversy erupted over whether the Skylink was a public transit project or a tourist attraction and whether toll money from local river crossings should be used to build it. The tram’s tower support was left standing, a testament to bad city planning and wishful thinking.

Water taxi service along Penn’s Landing has also been proposed for years, and a few boat slips for such a service have indeed been built. But the slips remain largely inactive and there is still no water taxi service on the Delaware River.

Another concern that led me to sell my condo is the removal of the scissor ramps at Penn’s Landing. The two, 1970s-era vehicular ramps lead traffic from Columbus Boulevard up to the Market Street Viaduct and from Chestnut Street down to Columbus Boulevard. Residents of Pier 3 and Pier 5 are worried that their demolition—beginning this month, in anticipation of the new Penn’s Landing project—would make it harder to drive to their apartments from the city, and vice versa. (Eventually, the Market Street Viaduct will also be dismantled under the Penn’s Landing decking plan.)

The DRWC has countered that both the recent installation of a left turn lane onto Callowhill Street from northbound Columbus Boulevard, as well as the reconfiguration of Spruce Street at Columbus Boulevard, mitigate the problems envisioned by residents currently living on the “wrong” side of I-95. 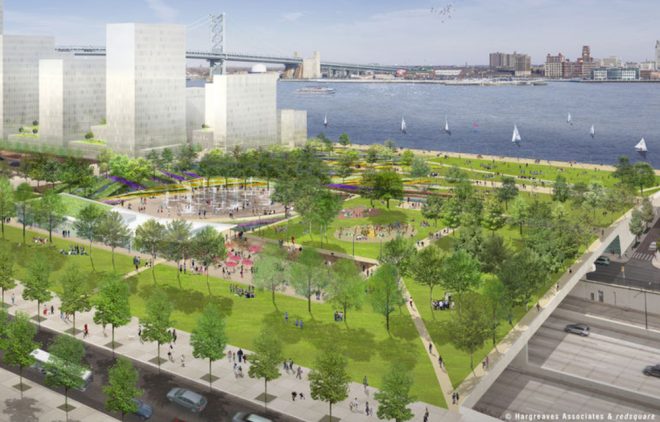 Yet, Pier 3 and Pier 5 residents feel that the DRWC  is acting unilaterally in the matter, and not looking out for the best interests of people who currently live on the waterfront. This was the topic of discussion during my last visit with neighbors at Pier 3. Some residents think that the DRWC is more interested in developing waterfront property under its control. The scissor ramps’ elimination would open up prime real estate for private developers that the DRWC seeks to entice into the revamped, and unramped, Penn’s Landing area. The mission of the nonprofit agency, established in 2009 from the remains of the Penn’s Landing Corporation, is to act as the primary steward for reactivating the riverfront, providing a growing array of public amenities and dynamic programming for our old, industrial waterfront.

On June 27th, members of the Pier 3 community met with the DRWC and First District Councilman Mark Squilla to discuss the scissor ramps and their demolition. Councilman Squilla offered a compromise: remove the western ramp (the one closest to Columbus Boulevard), transform this area into green space (for now, at least), and keep the eastern ramp in place for two-way traffic. The DRWC rejected the compromise, and removal of all ramps appears imminent.

And if the new Penn’s Landing project does go as planned, it will include the construction of new residential high-rises immediately south of Pier 3. Without these ramps, traffic along Columbus Boulevard, especially at the intersections with Callowhill and Spruce Streets, as well as increased traffic on both of those east-west streets, will be chaotic, especially for those living along the waterfront. Biking, running, and walking these congested thoroughfares will be a nightmare, unless a smart plan is put in place to handle the expected traffic.

I wish nothing but success for the DRWC’s new Penn’s Landing plan. Carrying big visions all the way to the finish line deserves praise, and a urban-minded makeover of the Delaware River waterfront is long overdue. But, as I write this in exile from suburban surrounds, I am worried that history will repeat itself yet again and my beloved riverside home of 20 years is being set up for yet another disappointing outcome. In short, the thrill is gone, and so am I…