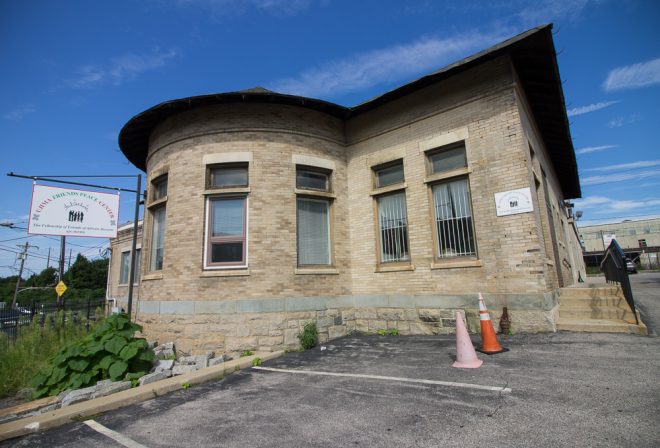 One of a few buildings that made up the old Frishmuth Tobacco Works at 17th Street and Lehigh Avenue. The industrial complex now houses a daycare, a senior center, and a number of outreach organizations. | Photo: Michael Bixler

For over a century, a factory complex has anchored the corner of 17th Street, Lehigh, and Glenwood Avenues with an attractive set of industrial buildings. Originally built to produce tobacco products, the old industrial campus now serves as a center for outreach organizations in North Philadelphia that support the surrounding community. 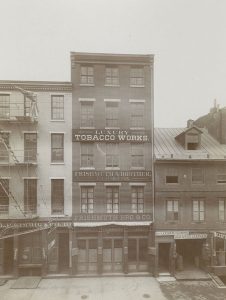 Jacob Frishmuth started his tobacco business in a long-lost building at 3rd and Callowhill Streets, starting out as a small operation that sold chewing and smoking tobacco. His two sons joined him in business and the firm went through the names Frishmuth & Son, then Frishmuth & Sons, then Frishmuth & Brother when Jacob retired in 1850. The same year, the company moved to a second location in a building that still stands at 151 North 3rd Street. It took until 1864 for the company to settle on its final name, Frishmuth Bros. & Co. By this point, adjoining buildings facing Quarry Street were added to the company headquarters. During this period J.C. Frishmuth had his company delivering tobacco to his fellow soldiers during the Civil War.

By the time Frishmuth Bros. & Co. expanded their plant even further on Quarry Street, they were employing over 100 workers, producing and distributing seven varieties of chewing tobacco and four varieties of cigarettes. In 1903, the fourth generation of Frishmuths purchased a triangular plot of land bounded by 17th Street, Lehigh, and Glenwood Avenues and the Pennsylvania Railroad freight tracks. Here they planned a tobacco production, storage, and distribution complex that would expand manufacturing operations with 20th century advancements.

They commissioned well-known Philadelphia firm G.W. & W.D. Hewitt, who were also working on the Bellevue-Stratford Hotel at the time, to design the new complex and Roydhouse, Arey, & Company for the construction.

When completed in 1904, the Frishmuth Tobacco Works was considered one of the most modern facilities of its type in the country. The complex consisted of several buildings. The offices of the company were located in the finest-looking building, which, today, still boasts an intriguing design that features a rounded section jutting out of the front. Next to the offices were the company’s printing machines that produced the typography and designs found on the company’s products. The basement of the same building held all of the box-making machinery. A storage building filled out the western side of the complex. On the eastern half of the complex, the four-story tobacco processing and product manufacturing section of the plant was built, along with a garage and engine/boiler room. All of the buildings were connected by a series of underground tunnels. What is now a parking lot was the complex’s front lawn.

At the time, the tobacco plant was considered a very desirable place to work. An article published in The State of Pennsylvania, Industrial and Financial from 1908 description states,”A person wishing a position at Frishmuth’s must wait for a death among the males hands or for one the girls to marry and leave, so pleasant are the surroundings of the employees.”

The company gained popularity during World War I when their tobacco products were provided to the military for soldiers fighting abroad.

From Stogies to Social Service

In 1921, the company expanded into national markets. They purchased the Lovell-Buffington Tobacco Company in Covington, Kentucky and moved their entire manufacturing and distributing operation there while keeping their administrative offices in Philadelphia. The reason the company moved was to have better access to nearby tobacco fields in the South, which produced a much larger yield than their Pennsylvania counterparts. 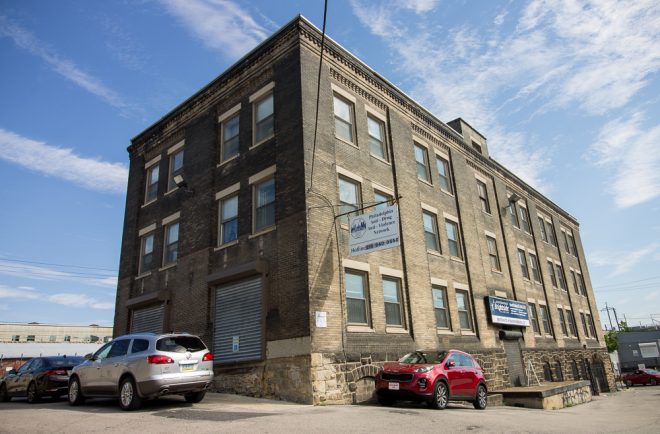 The Frishmuth family retained ownership of the old 17th and Lehigh plant and leased it to other companies. In the 1950s, the plant became a manufacturing and distribution point for Hose Accessories Company, which made parts and equipment related to all types of hoses.

In 1962, the Meco Metal Box and Panel Manufacturing Company purchased the complex and moved their operations there. The business manufactured every type of metal box imaginable, from electrical junction boxes to small playing card tins. They continued using the old Frishmuth complex until 1996, when it was purchased by local developer Joseph Williams who converted the factory complex into an office park called Lehigh Pavilion. Shortly after opening, former Pennsylvania State Senator Shirley Kitchen moved her offices there.