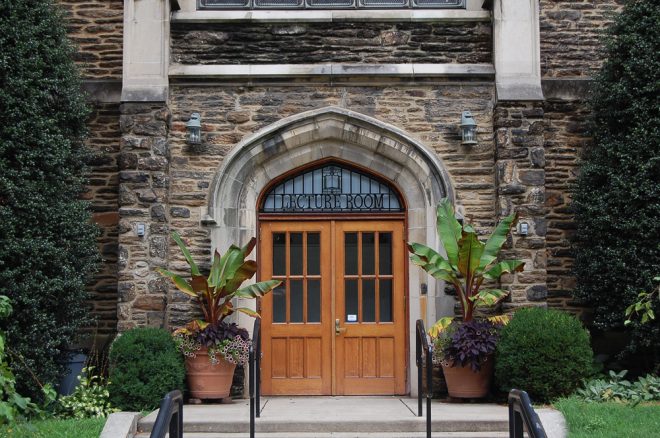 The primary functions of Philadelphia’s public libraries are rapidly evolving to address the needs of the city’s growing communities. While today’s library may be less about printed books than it was in the past, these institutions refuse to be rendered obsolete in the Digital Age. It is only natural, then, for library buildings, many of which are a half century or older, to be updated to support and foster the development of new community services.

Today’s libraries serve their surrounding neighborhood by connecting people to programming. The deliverables are diverse and include health and medical services, internet access, literacy and ESL instruction, job search and training, and after school activities. Libraries also keep people cool in the summer and warm in the winter.

There are two, citywide initiatives in the works to address the necessity of updating our city’s stock of 54 public libraries. One project is spearheaded by the Free Library of Philadelphia and the other championed by Mayor Kenney’s Rebuild program.

The 21st Century Libraries Initiative, developed and managed by the Free Library system, is already in progress with four branches under construction and one completed project up and running. The main goal of this initiative is to re-establish the library’s role as a central neighborhood resource in Philadelphia, serving as a portal to learning, public services, financial management, recreation, and overall community support.

The South Philadelphia branch, renamed the Philadelphia Community Health and Literacy Center, opened in 2016. The original library was demolished to make way for a new facility that is geared towards addressing the links between health, recreation, and literacy, while also acting as a vital, neighborhood hub. The new building has a library with a dedicated section to health and medical literacy on the first floor, apediatric and primary care facility on the second floor, and a well-designed recreation center in the back to enrich physical and mental health.

The four branches in progress–Tacony, Lillian Marrero, Logan, and Lovett Memorial–are undergoing extensive renovations to their existing structures. All four of these libraries were built in the early 1900s when steel magnate and industrialist Andrew Carnegie donated $1.5 million for the construction of public libraries in Philadelphia (he gave $40 million to cities nationwide). In addition to the structural rehabilitation and engineering upgrades of the Carnegie-era buildings, the branches will also receive glassy, modern additions. Many of these buildings suffer from outdated or non-functioning heating and air conditioning systems, leaking roofs, and lack of ADA compliancy, which will be addressed during renovations.

At Lillian Marrero in Fairhill, new programming will focus on immigrant services and early childhood literacy with spaces for meetings, peer mentorship, and an outdoor amphitheater for community readings and performances. At the Logan library, improvements include a reading garden, group study rooms to encourage family literacy and intergenerational learning, and ADA compliancy. For the Tacony branch, in keeping with the redeveloping commercial corridor along Torresdale Avenue, there will be a small business resource center that will feature dedicated space for providing the tools, resources, and education to grow a business.

The Free Library expansion at these four branches will serve as models for what Mayor Kenney plans to achieve at other branches under the City’s Rebuild program, which is currently in the planning and priority phase.

Function, Preservation, and the Future 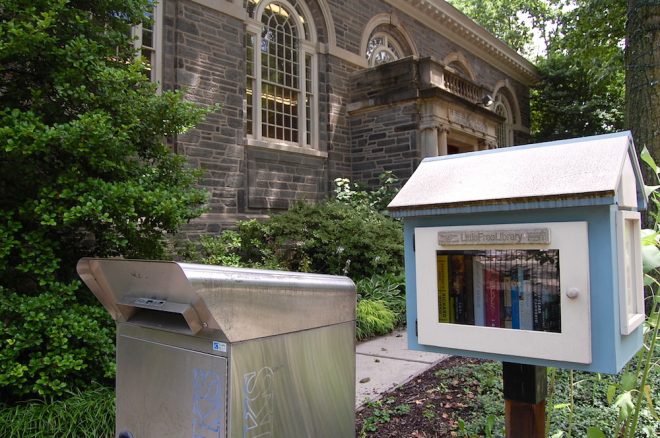 Carnegie libraries introduced libraries to the public realm for the first time. Previously, libraries were exclusive institutions, accessible only on a subscription basis. Philadelphia received the second-largest endowment of Carnegie library funds in the country. The buildings erected here made a significant contribution to defining the architectural style of American libraries nationwide. The T-shaped floorplan was established in Philadelphia, as seen in most Free Library branches from this era. Other iconic features include large, clerestory windows to allow light to enter from above and more shelf space below, open stacks for casual browsing, and flexible spaces for discussions, lectures, and community events.

While the architectural style evolved over time, foregoing the classical nature of Carnegie libraries as Modernist preferences came into fashion, the same features remained. The stone and brick were replaced with steel, glass, and concrete in the 1960s, but the large windows, open bookshelves, and multi-functional spaces proved a mainstay.

The architecture of libraries is not necessarily the first thing people think about when considering these civic institutions, but the internal design behind these buildings is an important facet of their functionality. No longer confined to the stereotypical dark, stuffy spaces filled with endless rows of books, modern libraries stand on the precipice of a new era of relevance in community service. Preserving the architectural of Carnegie structures of the early 1900s, along with the Modernist and Brutalist structures that dot the city, while adding features like technology labs, community outreach centers, creative outdoor spaces, children’s programming, health facilities, and literacy classes, is key to keeping Philadelphia’s libraries functional and thriving.

Below is an architectural tour of just a handful of the 54 branches that make up the Free Library of Philadelphia system. With the support of neighborhood “Friends” groups, municipal projects already underway, and funds earmarked for future investment, these buildings are being transformed to best serve our flourishing, 21st century city.

The following is a survey of Philadelphia’s most distinctive, neighborhood libraries.
Photographs by Grace Diliberto. 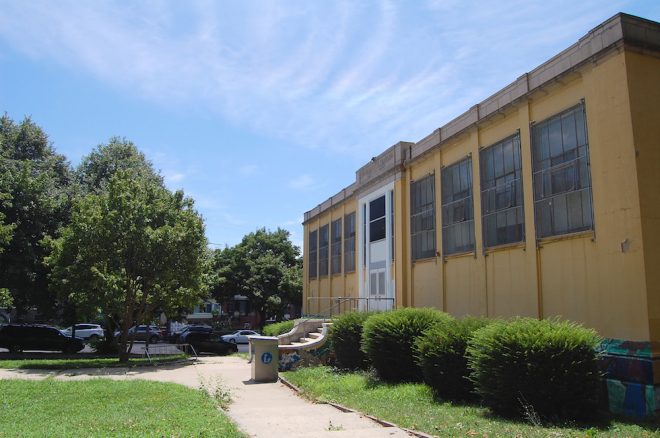 Significance: This was the 23rd branch funded by Andrew Carnegie in Philadelphia. While very typical of Carnegie-era libraries in its T-shape, the Cobbs Creek branch is completely unique with its stucco, terra-cotta, and metal and glass facade, as opposed to the typical stone and brick designs. 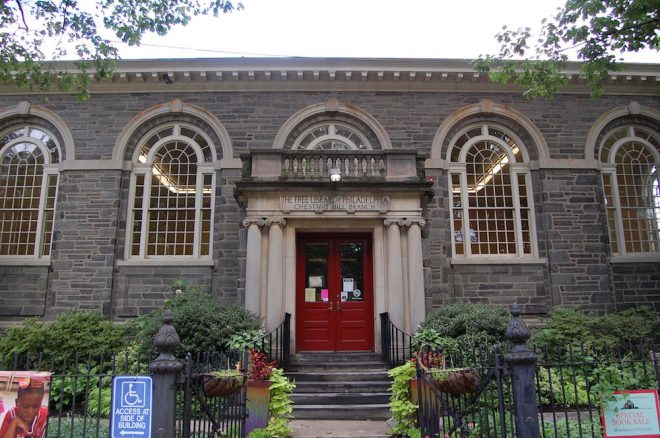 Significance: Chestnut Hill, the eighth Carnegie-funded library, was built using the Georgian Revival influence characteristic of the then-prominent architecture group Cope & Stewardson. The stone used is from the surrounding area, connecting the institution to its locality. This library also sports an addition built by Cecil Baker & Partners in the 1990s. The addition is mainly used as a meeting room and is primarily clad in glass, which can be seen as a predecessor of the contemporary preference for light-filled, airy spaces. 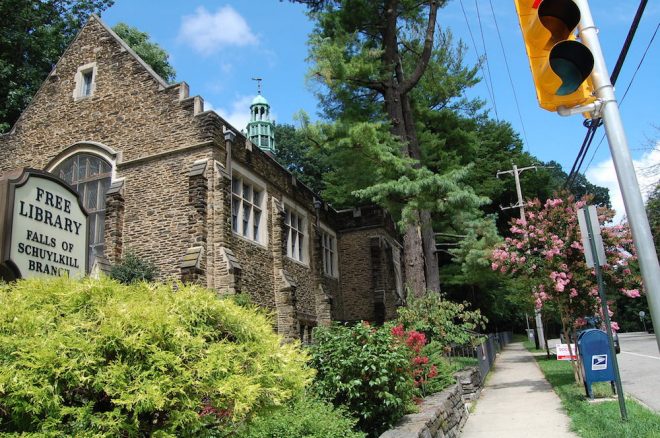 Significance: Another Carnegie library, this one is designed in the English Collegiate style and was built using stone excavated from the site upon which it was constructed. The catfish weathervane on top of the building is another homage to local history, referencing the catfish caught in the nearby Schuylkill River. Also notable is the beautiful landscaping and garden around the library that was cultivated by the Friends of the Falls of Schuylkill Library, a community group dedicated to raising funds for improvement projects on the library. 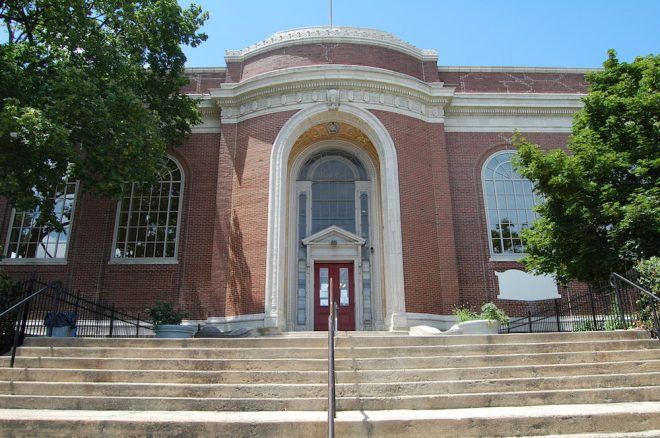 Significance: This library was designed by the same architect who chaired the committee tasked with redesigning the Benjamin Franklin Parkway. This Carnegie library, the 18th to be built in Philly, combines Beaux-Arts and Renaissance Revival and makes use of the local brick and limestone. Some particularly notable features are the curved entrance and arched portico beautifully adorned in polychrome terra cotta. 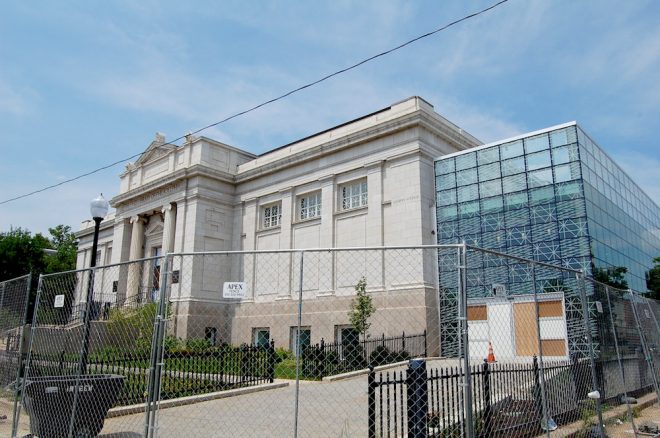 Significance: The third Carnegie-funded library boasts Grecian-style columns and white limestone, which sets it aside from the other Carnegie structures in Philadelphia. The addition currently in progress is built of glass, presumably to serve as a welcoming, light-filled beacon for the neighborhood 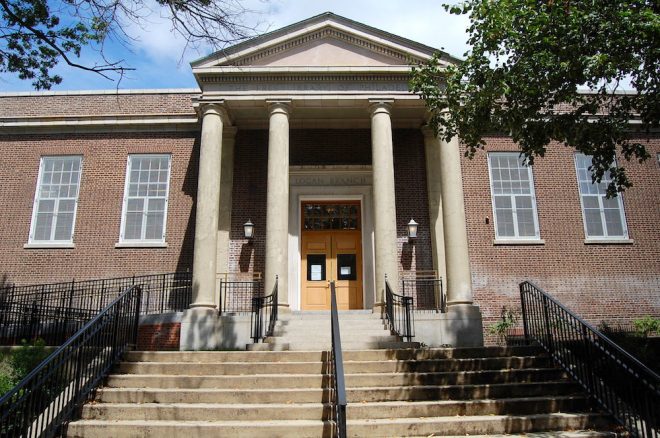 Significance: Another Carnegie library now under construction as part of the Free Library’s 21st Century Libraries Initiative is the Logan Branch. Some of the structural amendments to this classical structure will include a largely transparent addition and landscaped green space. 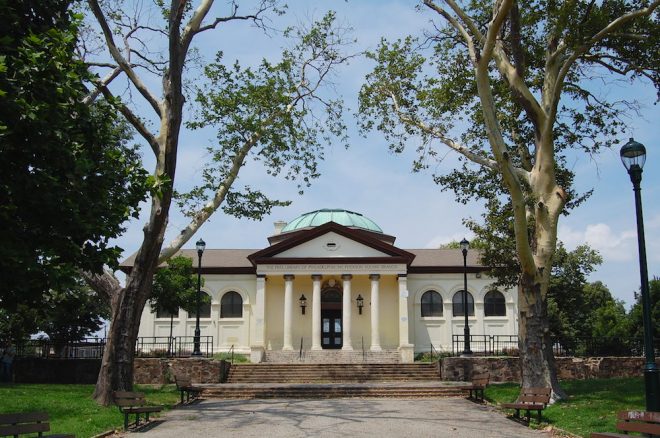 Significance: The 19th Carnegie library in Philadelphia exhibits the classical style and is meant to mimic a domed Palladian villa. While most branches are in or near a park or recreation center, or have outdoor space of their own, this branch is distinct in its position right in the center of McPherson Square Park. 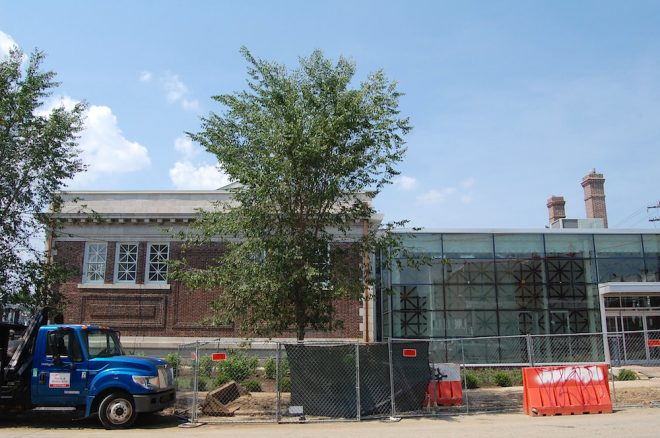 Significance: The fourth Carnegie branch is currently being redone as part of the 21st Century Libraries Initiative. Similar to other library additions under construction, the addition here is done in glass designed to mimic the fenestration of the original building. 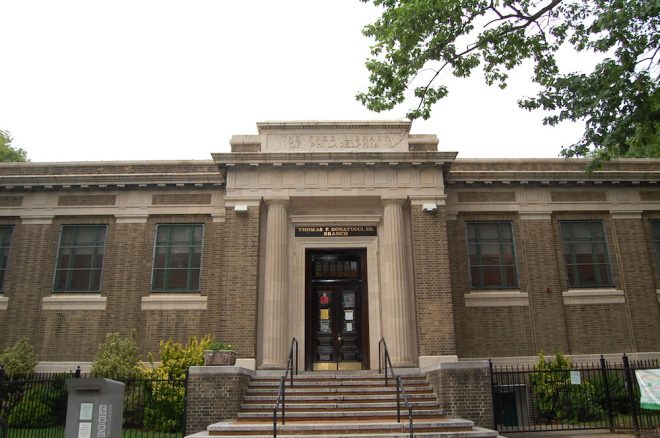 Significance: This library is smaller than most buildings of this era, but still presents the typical Beaux-Arts style that came to define Carnegie libraries. 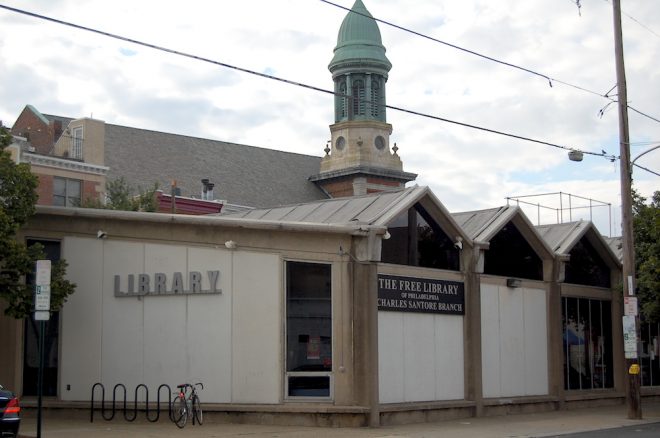 Significance: This branch is one-of-a-kind in Philly. Its Modernist, metal accordion-fold roof brings life to an otherwise straightforward facade and communicates an important, public space despite its small footprint and low, single-story construction. There is also an interior courtyard for reading and meetings. 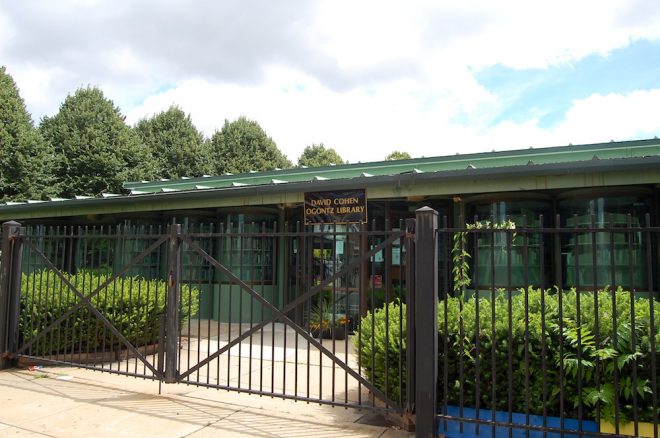 Significance: Ogontz stands apart from pretty much every other branch in the city because it was not designed by an architect, but was, in fact, made out of prefabricated materials. One of the smallest branches in the city, this single-story library is a pre-engineered modular building with carousel bookshelves. 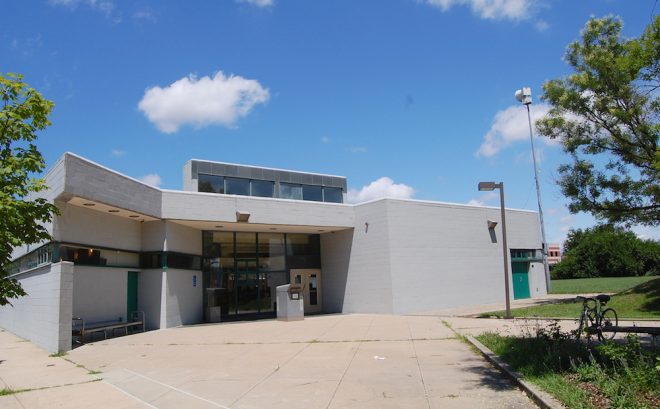 Significance: The Eastwick Library is one of the only branches built in the 1980s. The branch was placed along a busy road and only has one story. The grandiose windows we come to expect from most libraries are absent. Yet, the curved window here allows for maximum sunlight to enter the building, while also providing its own kind of visual intrigue from the exterior. The rectangular glass structure jutting skyward from the main building also allows light to come in without all of the sound from the surrounding highway. 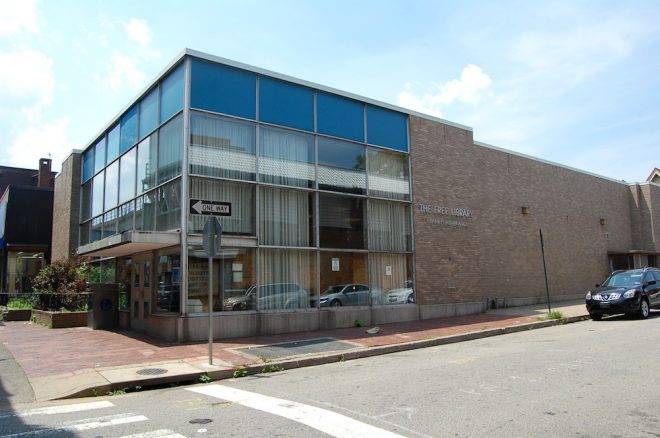 Significance: The Frankford Library in its current form stands out with its steel and glass structure despite being hidden underneath the Market-Frankford Line. While on a bustling commercial corridor, where site is often obstructed by the supports of the elevated line and most buildings pass by without notice, this structure really catches the eye. The see-through walls pull in the pedestrian and the size and cubed shape of the building sets it apart from many of its neighbors. 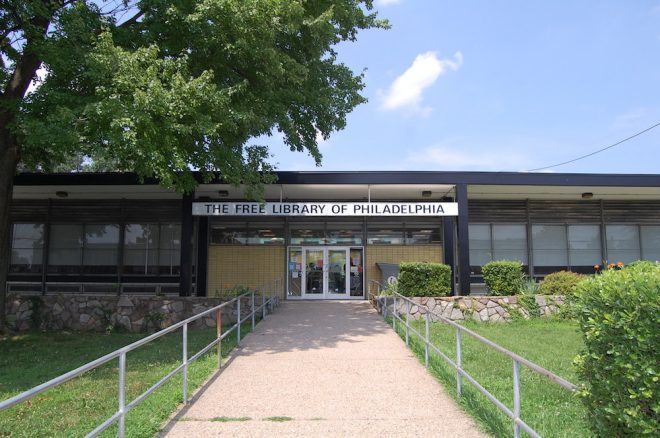 Significance: This branch displays clear, stylistic elements associated with Modernist master architect Mies van der Rohe, indicative of his influence in the architectural world in the 1950s, 1960s, and even today. 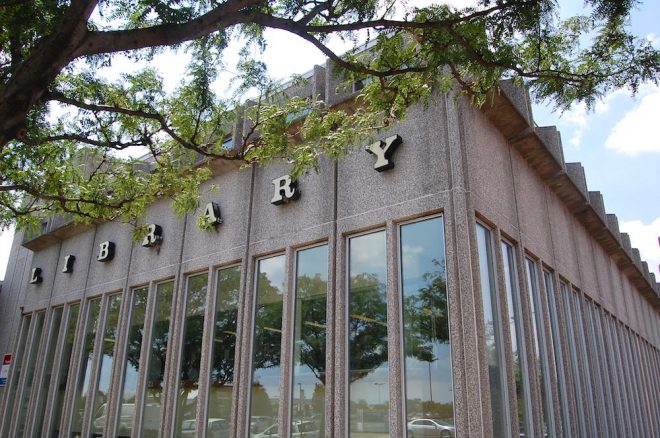 Significance: A rare example of the Brutalist style in the Northeast sets this building apart from strip malls and big box stores along Cottman Avenue. The pedestrian plaza and large, glass windows welcome pedestrians and motorists alike into this cornerstone of civic life. 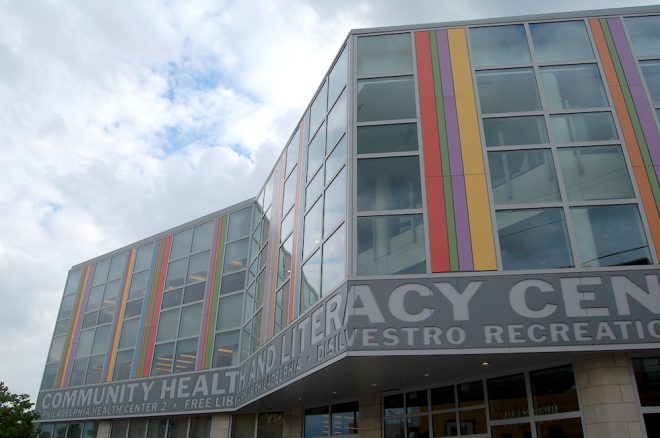 Significance: This relatively new branch houses more than just a library and is the first of its kind in Philly to combine human health and literacy services. Increased transparency marks the building as a welcoming community center from the outside and allows maximum natural light to flood inside (similar features are being incorporated into the four other branches under construction). The use of bright colors on the facade serve to connect the building to the multicultural nexus upon which it sits in between multiple South Philadelphia neighborhoods. 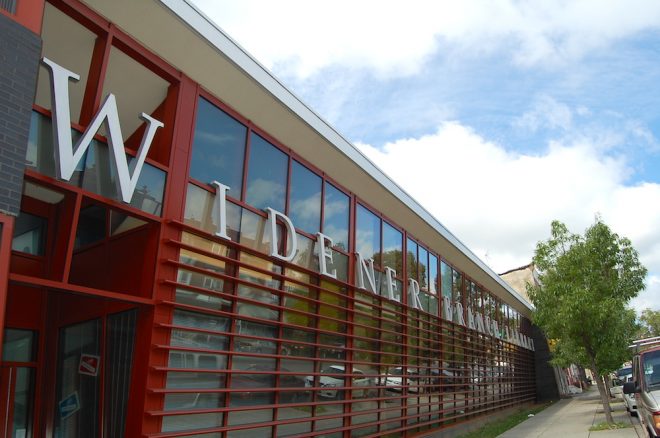 Significance: While this library predates the 21st Century Libraries and Rebuild Initiatives, its 2005 reconstruction, again largely done in transparent glass and steel fronting, was indicative of the reinvestment in and reimagining of our library spaces to come. Other amenities incorporated in this early example of a 21st century library are more space devoted to youth services, meeting and conference rooms, and an outdoor garden space. 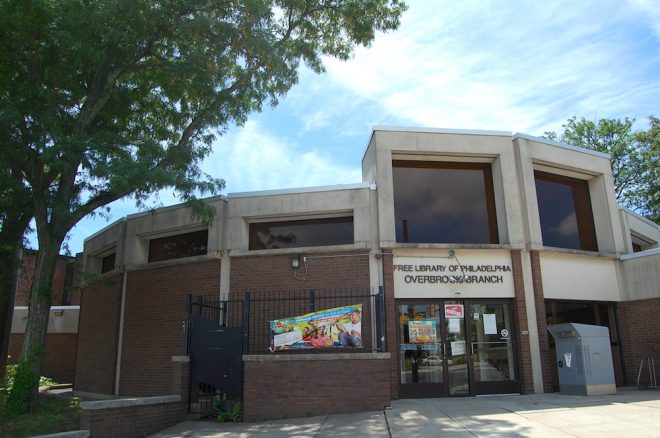 Significance: This branch features a funky, Brutalist, and defensive design, which may be the most significant departure in the city from classic Carnegie libraries. Nonetheless, the building still exhibits the key features of a front courtyard and strategically placed windows to allow natural light to flow in.

Grace Diliberto Grace Diliberto grew up in the Greater Philadelphia Area and received her BA in Environmental & Urban Studies from Bard College in the Hudson Valley in 2015. Since graduating, Grace has been living in a tiny trinity house in Fishtown and working at the Free Library of Philadelphia. Her past internships include time at the Mutter Museum, the New Kensington Community Development Corporation, and the Philadelphia City Planning Commission. Grace is interested in exploring the intersections of archives, preservation, urban history, and social justice.