Monument Lab Artist Stands Up For The City’s Lost Stoops 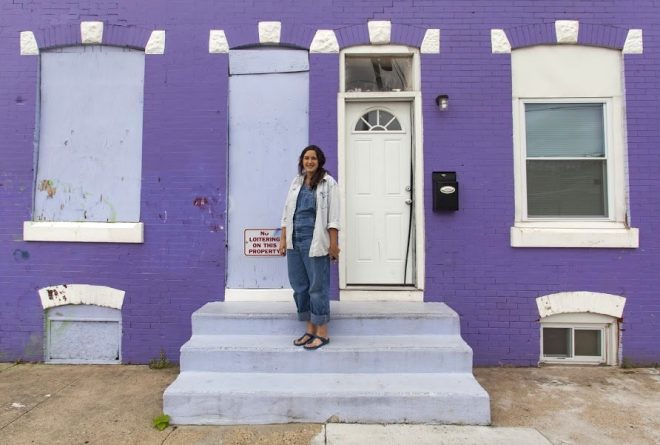 Philadelphia-based artist Kaitlin Pomerantz has been hunting for abandoned stoops. She is one of 20 artists selected to participate in Monument Lab, a public art and history project sponsored by Mural Arts that kicks off this September. The outdoor art happening will stage over 20 installations in public spaces around the city, each a response to the prompt “What is an appropriate monument to the current city of Philadelphia?” Pomerantz’s answer? The row house stoop.

In the fall, an assortment of stoops Pomerantz has collected from demolished houses throughout the city will be installed in Washington Square Park where they will temporarily serve as public art, seating, and a community conversation piece. The placement of abandoned stairs in the park, one of the original five public squares laid out by William Penn, feels pertinent. The stoops will undoubtedly spark discussion about Philadelphia’s growth and booming redevelopment. Appropriately, Pomerantz’s outdoor installation will be located just blocks from Society Hill, a famous urban renewal success story, which uncharacteristically utilized historic preservation alongside redevelopment. The art piece is also within proximity to Jeweler’s Row. The fight to save five historic buildings along the nation’s oldest diamond district, currently threatened by demolition and redevelopment, has sparked public anger and a citywide discussion around the shortcomings of Philadelphia’s current approach (or lack thereof) to historic preservation. Less obviously, in their heft and monumentality, the stoops will also give a subtle nod to the park’s early history as a potter’s field. 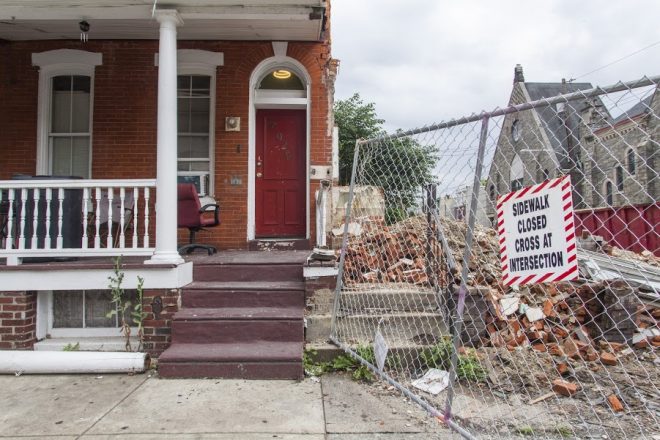 A stoop remains after demolition of a rowhouse at Aspen and North Preston Streets. | Photo: Starr Herr-Cardillo

Although a simple, architectural component, the stoop is a symbolic one. Derived from the Dutch word stoep, stoop refers to the raised platform at the entrance of a house, but has come to refer to the entire stairway unit leading up to a front door. Stoops were sometimes large enough to accommodate small benches and were often covered, functioning almost as a miniature porch. In Philadelphia, they are most often compact, simple, and a magnet for sitting on. As a city of row houses designed for efficiency and affordability, the majority of Philly’s stoops are relatively small, between one and five steps, and constructed of marble, brownstone, brick, or concrete.

Stoops have long been an object of urbanists’ affection, most notably by urban activist Jane Jacobs, who regarded the stoop as the ideal space for facilitating “eyes on the street.” Most prevalent on urban row houses, stoops, and their use by community members, can speak to a neighborhood’s health, safety, and vitality. “I think it speaks to the power of the object itself—the stoop. It seems like every single person has a story or anecdote,” Pomerantz muses. Throughout the process of stoop collecting, she has encountered a number of people eager to share stoop stories. Recollections of neighborhood games of “stoopball,” intergenerational cleaning or step rotating techniques, and special recipes for whitening marble stoops that have been passed down by grandmothers speak of the stoop as a memory collector. “All these backstories and contextual elements make the project a lot richer,” Pomerantz notes, adding that she hopes to continue to collect and share more stories as part of the project. 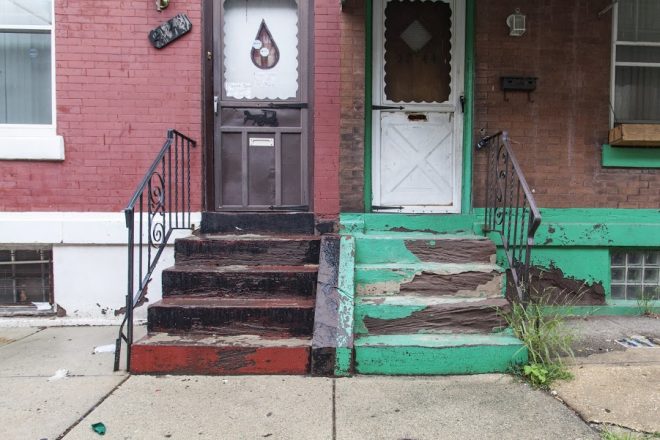 The concept is straightforward enough, but stoop collecting has not proved to be a particularly easy task. Pomerantz remarks of the process, “It definitely has a hunt element to it, where you feel like you have to be at the place at the exact right time with the right equipment or else you’ve missed the opportunity.” The pace of citywide demolition has proven to be a real challenge. “Because construction happens so quickly, frankly it’s just easier for materials to end up in the waste stream than to get salvaged and sorted appropriately.” After a number of attempts to secure owner permission to salvage stoops from homes to be demolished, Pomerantz had to reconsider her approach, turning instead to people on the other side of the demolition process.

“I really wanted to be at this particular building and be able to take the stoop right then and there,” says Pomerantz who was hoping not only to collect and reassemble stoops, but also to note where they originated and collect from various parts of the city. “But instead, I”ll get a call from a demolition guy and he has three stoops that day because they demo’d three homes. Sometimes he knows the addresses and sometimes he doesn’t.”

Stoops are a challenge to move and expensive to replace, especially those made of quality marble and brownstone, materials that were once abundant, but are now almost prohibitively expensive for many homeowners. They can also be somewhat architecturally complex. Although they may look like stacked, solid stone, a typical stoop actually consists of multiple parts, including a series of solid, rectangular stone steps that are flanked by thinner stone facing on the side (adorably called “cheeks” in stone mason parlance) and a mortared brick fill. Fortunately, Philly’s local bricklayer union, Bricklayers and Allied Craftworkers Local 1, has heroically stepped in offering to store, reconstruct, and install all of the stoops for the project free of charge. 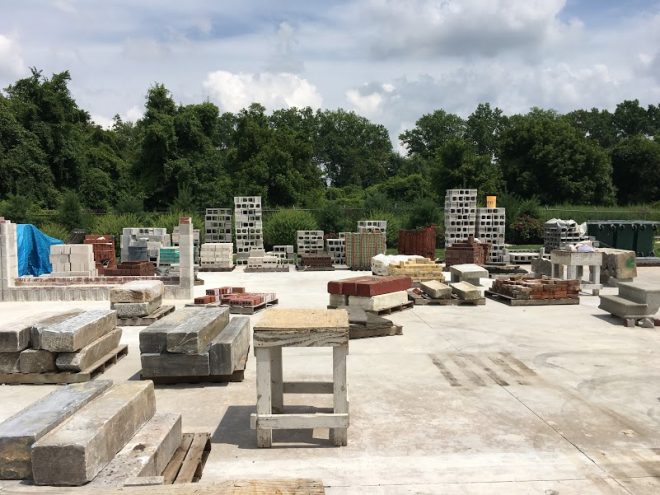 Stoop materials laid out for reassembly at the Bricklayers and Allied Craftworkers Local 1. | Photo: courtesy of Kaitlin Pomerantz

Pomerantz has also been working with Bob Beaty, owner of Beaty American, an architectural salvage shop in Old City, who she refers to as “the grandfather of salvage in Philadelphia.” As we navigate around piles of marble and brownstone in one of the storage yards Beaty shares, I ask how long he’s been in the salvage game. “Forever. Beginning of time.” And it’s true, further questioning reveals that his history really does show a predilection for reuse in all of its forms. Born and raised in West Philly, Beaty spent time in California, where he ran a landfill and then worked in the compost industry.

Beaty believes that it should be the City’s responsibility to enact an ordinance requiring the deconstruction and reuse of building materials. And though it is a stretch to imagine Philadelphia, a city that pales in comparison to other major cities when it comes to protecting its architectural heritage, other cities are giving it a try. In Portland, Oregon, a deconstruction ordinance mandates that any building built before 1916, or any building that is historically designated, must be manually disassembled so that materials may be salvaged and reused. Taking into account the embodied energy that existing buildings represent, mandated deconstruction and reuse starts to make the far too overlooked connection between preservation of the built environment and environmental sustainability. Not only are we losing embodied energy when we demolish existing buildings, we are often losing valuable, quality materials and products of craftsmanship that may not even exist anymore. This last point is amplified in Philadelphia, a city that enjoyed sustained wealth and investment throughout the 18th and 19th centuries. 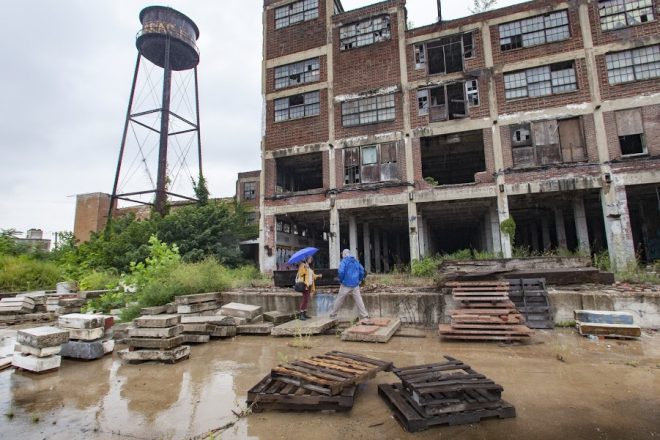 As someone who has always worked in the world of reuse in one capacity or another, Beaty sees preservation and reuse of buildings and sustainability as one and the same. “Preservation, sustainability, I think they’re all interrelated.” For Beaty, the obligation to reuse and repurpose older buildings and materials comes from a place of moral obligation to the planet. “If someone was to grade humanity for the way we’ve taken care of the planet, it’d be an ‘F’.”

It is hard to disagree. Beaty flips through his phone to show me a picture of the three tons of sculpted brownstone that he salvaged from the New Light Beulah Baptist Church at 17th and Bainbridge that was recently demolished to make way for condominiums. “Where is something like that likely to end up?” I ask. Beaty doesn’t even pause to think about it before he replies, “Oh you know, probably in somebody’s garden.”