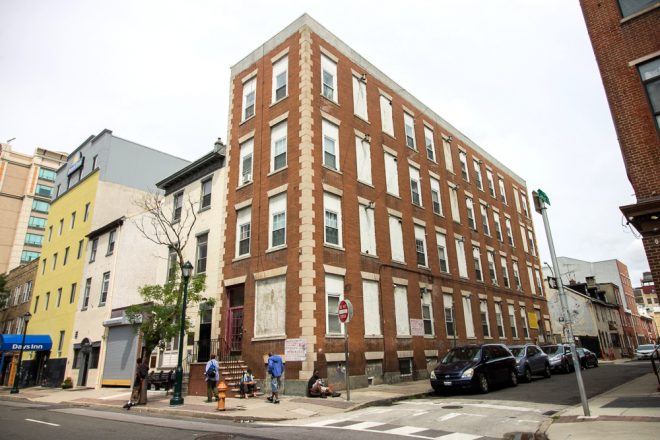 The building on the corner of Race and Camac Streets has served the city’s shifting commercial sectors for over a century. The property was converted into apartments in 1999. | Photo: Michael Bixler

The thin, keystone-covered building on the northwest corner of Race and Camac Streets has been a haven of thriving businesses for over 110 years. The old, industrial property, one of few survivors surrounding the Pennsylvania Convention Center, has a history that brings into view a timeline of Philadelphia commerce and the transition of fading industries.

In 1906, businessman and socialite George B. Mahn purchased a lot at the corner of Race and Camac Streets to build a speculative, four-story industrial building. Mahn was involved in a number of businesses, including a stake in his brother Godfrey’s famous cigar store business. The Mahns had smokeshops in three locations within the boundaries of what we call Midtown Village today. Their flagship store was at 13th and Chestnut Streets.

Mahn hired Charles Oelschlager to design the building. Oelschlager, an expert on a variety of architectural styles, is one of Philadelphia’s unsung architects. He designed homes, churches, apartment buildings, office buildings, theaters, industrial buildings, car dealerships, gas stations—you name it. Scores of his abundant output still stand all over the city.

The building at 1219 Race Street was completed in 1907. It appears to have stood empty for the next two years. At the time, Mahn, highly regarded in Philadelphia’s social circles, was dealing with the fallout of controversy when his daughter married his nephew and the union made national news. 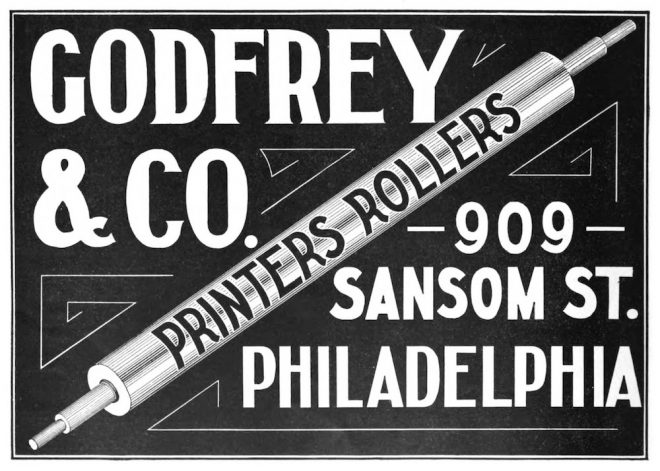 Upon moving into their new headquarters, the Godfrey Roller Company accelerated production and expanded distribution of print rollers and tablet gum into national and international markets. By 1912, newspapers all over the world were being printed using equipment made by Godfrey Roller Company. The manufacturer is still in operation today in Oreland, PA.

Long Publishing Company moved into the building in 1926. Jesse C. Long was a Nashville, Tennessee newspaper editor and publisher who started his own company with partner Bethel Johnson. Looking to expand into Philadelphia and Atlantic City, Long established operations in the northeast, while Johnson stayed behind in Tennessee to oversee company headquarters. The Philadelphia arm of the company moved to the 1300 block of Cherry Street a few years later. A.L. Weinstock, publisher of the Travelling Elk, a publication for members of the Elks Club, briefly moved into the vacant space.

George B. Mahn still owned 1219 Race Street when he died in the late 1930s. After Mahn’s estate was settled, the building was purchased by William Lee Leiser. Leiser was the CEO of his family’s business, W.A. Leiser & Company, which made a variety of electrical wiring and later specialized in marine cable, electrical wiring used for sea vessels. The company installed a large sign over the building’s Camac Street façade. W.A. Leiser & Company occupied the entire building at 1219 Race until 1977, when they consolidated on the upper floors and leased the basement and first floor out to the Regal Thread & Notion Company, a sewing supplies distributor that is still in operation in Northeast Philly.

In 1978, the building was sold to George R. Stallone, who moved his company, Stallone Typography Services (later Stallone Quality Graphics) into the building. Stallone’s company provided graphic design, photography, and typography for advertising firms, along with in-house printing operations. The company was in business until the 1990s.

The building’s current owner, Lei Wai Chen, purchased the property in 1997. The old industrial building was converted into apartments in 1999 under the designs of local architect Sabrina Soong.