Off The Grid: Exploring Fragments Of Philly’s Lost Roadways

The history of Philadelphia’s street system is a familiar one. The city’s wide-reaching grid began with William Penn’s original concept for organizing Philadelphia between the Delaware and Schuylkill Rivers. Several of the city’s major diagonal arteries are colonial roads that followed high ground or connected disparate settlements and towns. Some of the best examples of these roads include Germantown Avenue and Ridge Avenue in Northwest Philadelphia, Passyunk Avenue in South Philly, and, to the north, Old York Road, Frankford Avenue, and Richmond Street. Scattered among the city’s all-encompassing network of roads are subtle remnants of Philadelphia’s pre-grid street system. These roadway fragments pepper the grid all over town, providing unique markers of urban evolution. 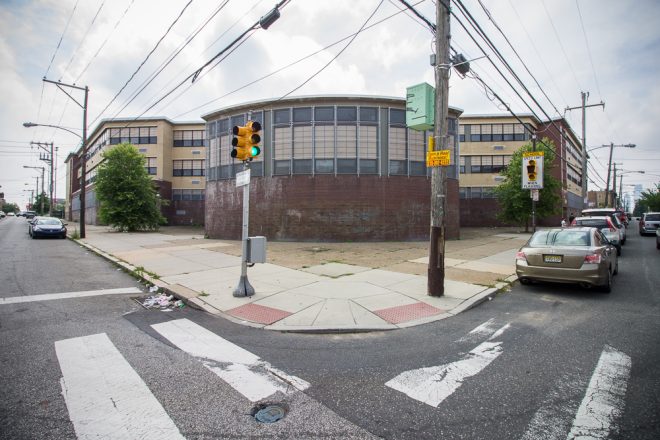 Last year my family and I attended an open house at George Washington Carver High School, just west of Temple University. One thing that struck me was the school’s unusual orientation. It sits at a 45 degree angle to the grid at 17th and Norris Streets. Carver’s unusual orientation is a relic of Monument Cemetery, which was at this location during most of the 1800s and the first half of the 20th century before being demolished in the 1950s. The cemetery’s diamond-shaped orientation itself resulted from a pair of the pre-grid streets, Turner’s Lane and Camac Lane.

Turner’s Lane ran northeasterly from what we now call Brewerytown to the current location of Germantown Avenue and West Cumberland Street. The shorter Camac Lane formed the northeast side of Monument Cemetery and traveled out to Kensington. As the grid expanded to encompass North Philadelphia, it was overlain around Monument Cemetery, leaving triangular parcels of land. One of these triangles was at 17th and Norris Streets–what is now Carver High School. The other triangular parcel, at Broad and Norris Streets, included a group of houses known collectively as Triangle Apartments. In early 2015, Temple demolished the apartments in preparation for the site of their widely contested football stadium that may or may not be built on the site. There is also a very small building at the northeast corner of 16th and Norris that sits at 45 degrees to the intersection, likewise marking the orientation of the long-gone cemetery.

Other examples of these road remnants are more permanently embedded into our urban fabric, although they often require research to understand where and what they are. The most obvious examples of the early layout of the city road system are some of our major arterials, those that create awkward, angled intersections throughout the city and throw the grid off-kilter. Other examples of pre-grid roads reveal themselves in unexpected places and they range in size from small street fragments, to a few blocks, to whole neighborhoods. 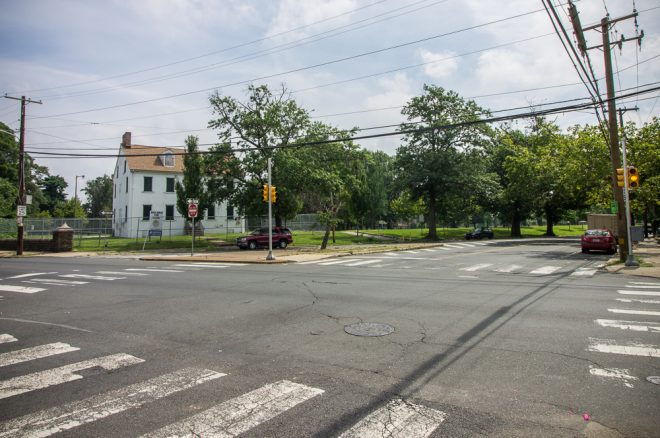 West Lycoming Street curves along the base of Hunting Park after it crosses Old York Road. | Photo: Michael Bixler

One of the smallest pre-grid fragments is a portion of West Lycoming Street, which forms the southern boundary of Hunting Park. This three-block section of West Lycoming is a remnant of the much longer Nicetown Lane, which appears on maps as early as 1808. Nicetown Lane led from a ford of the Schuylkill River at what is now Laurel Hill Cemetery and traversed the city to Frankford. By 1895, the western sections of Nicetown Lane were renamed Hunting Park Avenue. If you take that route today, you are following the same road that was travelled by Philadelphians over 200 years ago. 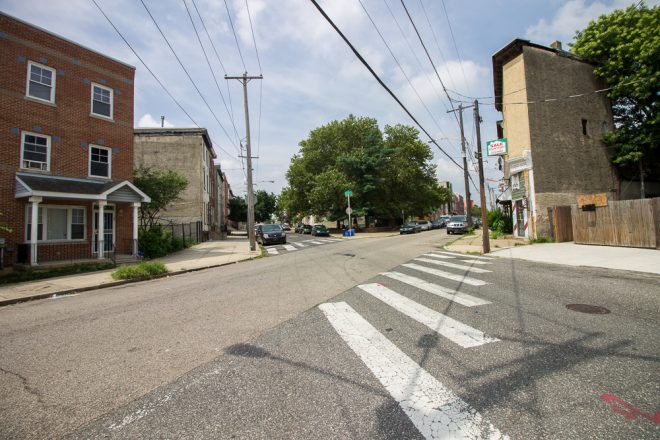 Vineyard Street does a diagonal dance across Poplar Street on its way to Ridge Avenue. | Photo: Michael Bixler

When travelling along Ridge Avenue, you are confronted with similar types of odd intersections. As Ridge Avenue transects the network of numbered and cross streets, it often results in five-and six-way intersections. But, for a few blocks in Francisville just south of Girard College, a few streets are oriented at right angles to Ridge Avenue. These small roads, Ginnodo, Vineyard, Edwin, Wylie, and Francis Streets, appear on maps by 1808. Francisville is likely the oldest settlement in North Philadelphia, originating as an area for vineyards.

At the southern edge of Francisville, Fairmount Avenue does not run exactly parallel to its adjacent east-west neighbors, Brown and Wallace Streets. This is because Fairmount Avenue is much older than the other two, appearing on maps by 1808. It was first named Plumstead Lane, then Francis Lane, and then Coates Avenue before being named Fairmount Avenue in the late 1800s. 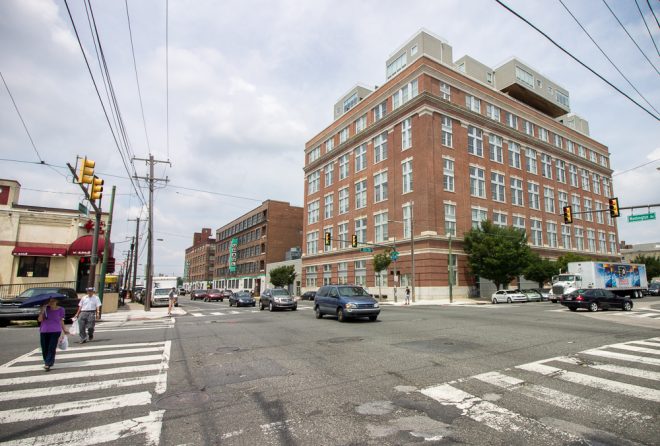 To account for this difference in orientation you have to look at the development of Philadelphia County before its consolidation in 1854, when the City of Philadelphia was bounded by Vine Street, South Street, and the two rivers, while the remainder of the county was divided into townships and districts. Southwark District, parts of which are now Bella Vista, Queen Village, and Pennsport, had its own street system, related to, but developed separately from Philadelphia’s grid system. The streets in Southwark were oriented perpendicularly to Moyamensing Avenue, rather than being a continuation of the grid north of South Street. This makes perfect sense when you consider that Moyamensing Avenue was the main thoroughfare in this district. It makes far less sense when these streets needed to accommodate their later neighbors, again creating a number of oddly-angled intersections throughout eastern South Philadelphia. 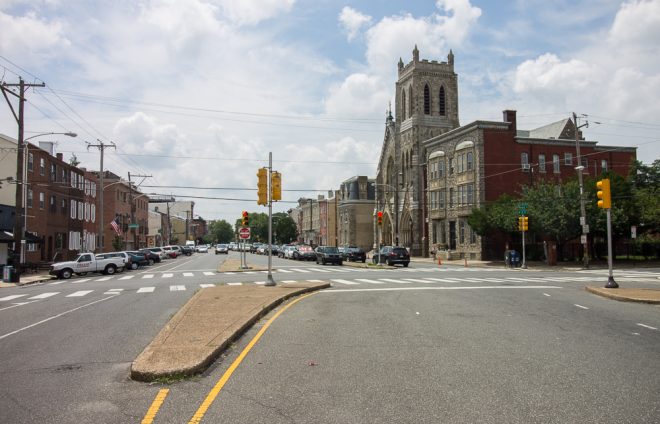 Lots of options at Moyamensing Avenue and Reed Street. One of the weirder intersection in South Philly. | Photo: Michael Bixler

In studying historic maps of Philadelphia, these early road fragments and alignments ebb and flow, like watching disappearing ink come and go. One of my favorite street fragments occurs in the Hawthorne neighborhood. Trying to understand the westward expansion of Christian Street and Washington Avenue to the west, I noticed Shippen’s Lane, a southern continuation of 13th Street, below South Street. The lane has been completely erased by modern streets, with the exception of two very short blocks of South Clarion Street that run at an angle between South and Bainbridge Streets.

The locations highlighted here are a few of many examples throughout Philadelphia where early 18th century road patterns still reveal themselves. There are many more, located in almost every neighborhood. Next time you are out exploring the city, take notice of the streets that do not fit. They often tell a story of the city’s interesting, and not always logical, development. We often think of historic preservation in terms of buildings, but not as often in terms of the broader, urban landscape. It is worth remembering that these eccentric intersections and small side streets reflect our history and the evolution of a city in constant transition.