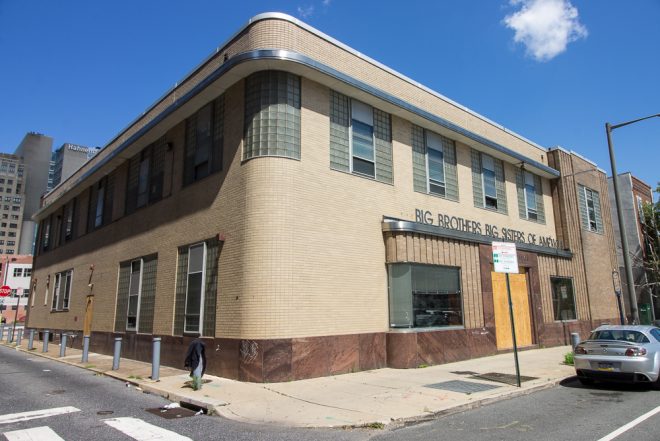 In 2014, Baywood Hotels submitted plans to the Historical Commission to build a nine-story tower on top of the old Film Exchange Building. It didn’t happen. The curvy, Modern landmark, listed on the Philadelphia Register of Historic Places, has sat vacant and vandalized since. A new construction permit was filed last month to build a 15-story high-rise hotel and restaurant. | Photo: Michael Bixler

The former Film Exchange Building at 230 N. 13th Street is an Art Moderne gem in desperate need of a creative intervention. The building was designed by 20th century movie theater architect William Harold Lee for the Warner Brothers Pictures Distributing Corporation and stands as a fine, architectural representation of mid-century Philadelphia. At just over three stories, 20,000 square feet, and mere steps away from Chinatown, the building would be an attractive addition to the city’s unique co-working spaces.

The building, last used as the headquarters of the Big Brothers Big Sisters of America Corporation, was constructed in 1945. One of William Harold Lee’s first major commissions was to renovate the interior of the Walnut Theater in 1920. He is also credited with the 1925 redesign of the interior of the recently demolished Royal Theater on South Street. Lee would go on to design the Sedgwick Theatre on Germantown Avenue, the Pennypack Theater in Holmsburg, the Seville Theater (now Bryn Mawr Film Institute) in Bryn Mawr, and a host of other theaters in Jenkintown, Wayne, Lansdowne, Reading, and elsewhere.

Over the last five years, Philadelphia’s co-working market has blossomed. The concept now has the potential to evolve and accommodate more sectors of industry. What remains underexplored is shared, food production space. From ice cream makers to dog treat bakeries, there is a growing collection of niche, culinary businesses that need more space to cook. Many operate out of their home kitchens, unable to cover the costs of renting an industrial kitchen on their own for expanded production.

With the Film Exchange Building, we decided to explore a space that accommodates cooks on a budget and in need of commercial production space. In the spirit of creative reuse, we took things a few steps further with a proposal of converting this Modern beauty into a gluten-free, co-cooking center.

According to the FDA, it is estimated that over three million Americans have celiac disease. For people with high sensitivity to gluten, cross contamination during production can be a concern. Hence the idea for a gluten-free, co-working kitchen. 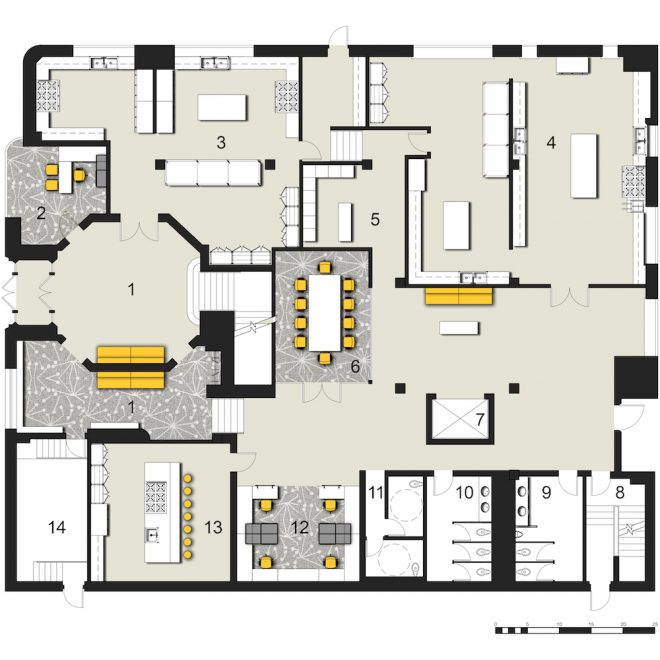 The existing floor plan of the Film Exchange Building is quite compartmentalized. Without compromising the integrity of the exterior, we will open up the floor plan considerably in our design to allow for two large commercial-grade kitchens and one smaller teaching kitchen.

Adherence to gluten allergy food safety will be paramount. Per the FDA’s definition of “gluten-free,” no foods with more than 20 parts per million of gluten will enter the building. That means that all kitchens on both levels will be entirely gluten-free.

The plan for the first floor will be carried over on the second floor, with a few adjustments. From 13th Street, co-workers and visitors will enter the original, octagonal lobby, the interior walls of which are clad with shiny, black granite. This original detail will remain, but finishes throughout the building will be updated with brighter, airy materials. Work spaces will be fitted with commercial kitchen flooring and rubber mats in alignment with OSHA’s highest work safety standards.

The kitchens will be equipped with industrial-grade appliances. Although most fixtures will be built-in, shelving and islands on casters will be available for members to temporarily customize their workspace to increase efficiency. The hall adjacent to the first floor kitchen already has access to the street for deliveries and shipping. The building has parking lot that can fit up to 25 vehicles. The lot will also be used for pop-up flex space. 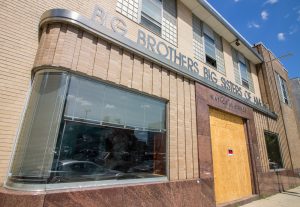 A sign of the times. This “big” chrome sign from the days when the building was the HQ of Big Brothers, Big Sisters of America will be emulated in this proposal for a new co-working kitchen sign. | Photo: Michael Bixler

Straight across from the main entry is the central staircase leading to the second level. Immediately to the left of the 13th Street entrance will be a managing director’s office.

At the top of a secondary staircase will be the entrance to another shared kitchen space. Around the corner is a set of lockers for members. Further along is a conference room that can also be used by employees and members as a communal workspace. Past the conference room is an elevator. Any food deliveries that come through the back entrance can be moved to second floor kitchens here with relative ease.

A small office with several workstations will be established for permanent employees of the co-cooking center. Next to this space will be a teaching kitchen, which will be used for weekly community gluten-free cooking classes and professional instruction on avoiding cross-contamination. The space may also be reserved by members for product demonstrations and last-minute catering gigs. A small cookbook library and commons area will also be installed.

The soft, shapely corners of the exterior will be faithfully preserved. The glass block and windows will be updated for energy efficiency. A new metal sign, inspired by the Big Brothers Big Sisters of America’s mid-century modern sign currently on the building, will be installed.