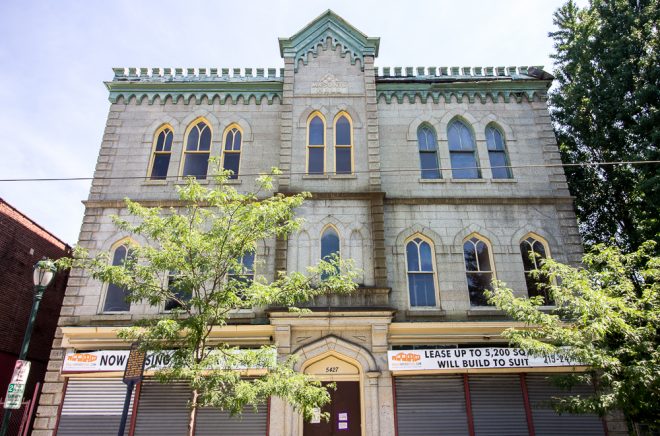 Germantown’s historic building stock is unlike any other neighborhood in the city. Vampy Victorians, sparkling Colonials built with Wissahickon schist, and gorgeous Gothic and Georgian Revivals blanket the area in a patchwork of architectural riches. The old Germantown Masonic Hall at 5423–27 Germantown Avenue is one of many jewels in the neighborhood’s bottomless treasure chest. The building’s current owner, real estate developer Ken Weinstein, is in the planning stages of adapting the 143-year-old building into two, commercial storefronts and 14 apartments.

Germantown Masonic Hall was built on the site of Pine Place, a mansion notable for being the birthplace of Louisa May Alcott, the author of Little Women. The origins of Germantown Masonic Hall began in 1855, when Masonic order Hiram Lodge #81 moved to Chestnut Hill where the group still operates today. Members of the lodge from Lower Germantown who were opposed to making the long trek by foot petitioned the Grand Lodge of Pennsylvania to start a new chapter closer to home. On December 22, 1855, Mitchell Lodge #296 was officially installed with 22 charter members, 19 of which had come from Hiram Lodge. 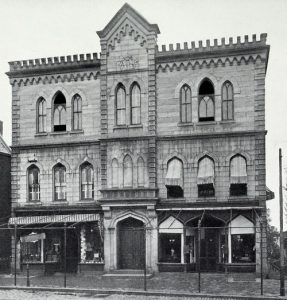 The new chapter had no official meeting place for two years. Mitchell Lodge members bounced between meeting at the local Oddfellow’s Hall and Germantown Town Hall. They eventually landed a lease on the third floor of Hopkin’s Hall, which still stands at 5719 Germantown Avenue. By 1867, plans to build an official meeting hall began to percolate. On February 20, 1873, a vote confirmed the old Pine Place property as the site for the new hall. The property was purchased for $12,000.

Later that year, the Masonic Hall Association of Germantown was formed by 10 appointed brothers of the Mitchell Lodge to develop, build, and manage the new Germantown Masonic Hall. Construction began in the summer of 1873 and continued for over a year. The architect of the distinct building is unknown. John D. Caldwell, an architect and builder that was a member of Mitchell Lodge at the time, may have been the designer.

Germantown Masonic Hall opened on November 12, 1874. The Gothic Revival hall stood out among the other, much older buildings on Germantown Avenue with its arched windows, embattled, metal cornice, and a façade using different types of polished stone.

In 1900, a large banquet hall was installed on the 2nd floor for use by Mitchell Lodge and outside venue rentals. A rear addition was built in 1915. The building’s interior underwent a full renovation in 1920.

The ground floor retail space was combined into one storefront in 1940. It was occupied from 1940 to 1967 by Eugene Maurer, Inc., a hardware store that also sold home furnishings and toys. From 1971 to 2016, it was the showroom of the Cunningham Piano Company, just around the corner from the piano maker’s workshop and factory on East Coulter Street.

Oliver and Galassini announced the impending move of the piano company’s showroom to King of Prussia several years later. Germantown Masonic Hall was listed for sale at the end of 2014 for $925,000. The building remained on the market for the next two years.

In 2016, Ken Weinstein, president of Philly Office Retail, purchased the property for $500,000. The zoning designation of the property still stands at RSA-2, which requires a variance for mixed use. The Upper Northwest District Plan, which will go into effect in this fall, will rezone the parcel CMX-2.5, which will allow Weinstein to adaptively reuse the property for both commercial and residential use.