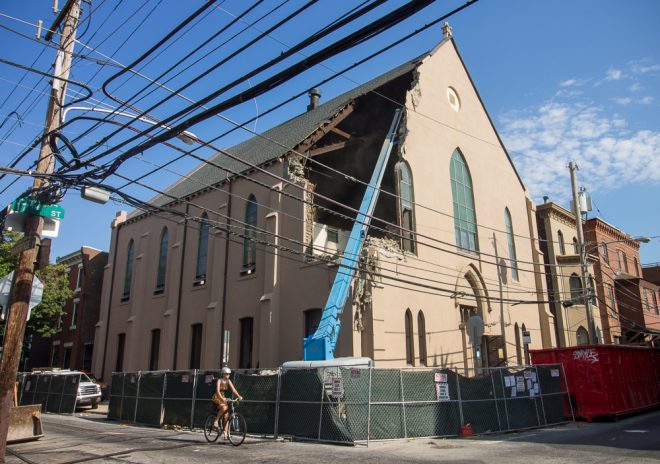 New Light Beulah Baptist Church at 17th and Bainbridge is being demolished for the construction of five new homes. | Photo: Michael Bixler

The demolition of two neighborhood churches began this week, nearly a month after the National Trust for Historic Preservation declared Philadelphia’s collection of neighborhoods a “National Treasure.” The New Macedonia Church at 875 Corinthian Avenue in Fairmount and the New Light Beulah Baptist Church at 1701 Bainbridge Street in Graduate Hospital, both architectural fixtures of their respective neighborhoods, will make way for new residential construction.

New Light Beulah Baptist Church was sold in March 2017 for $2,150,000. Building permits show that the owner plans to build five residential units on the lot.

New Macedonia Church on Corinthian Avenue was purchased for $775,000 in 2016 by MRB Investments, LLC. As of publication, a building permit has not been filed on the property. 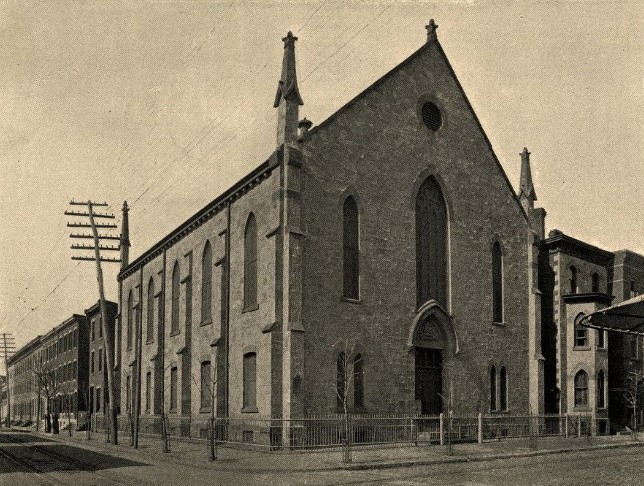 Neither church is listed on the Philadelphia Register of Historical Places and, therefore, lack legal protections from being razed. Demolition delay, a provision widely used in major U.S. cities, enables municipalities to place a temporary stay on demolition in order to evaluate the historical and cultural significance of a building slated for removal. The City of Philadelphia has yet to adopt a demolition delay provision in its Historic Preservation Ordinance.

“Demolition delay for buildings of a certain age would be a way to stop the bleeding of the loss of buildings like the church on Corinthian Avenue and the one at 17th and Bainbridge,” said Paul Steinke, executive director of the Preservation Alliance for Greater Philadelphia. “It would put a pause on demolition and insert a process by which a building can be assessed for its viability as an adaptive reuse prospect. The way that it is today, with less than three percent of the city’s buildings designated, there really is no way to stop the spate of demolitions we’ve been seeing for years now. As a result, we are encountering some terrible losses and these two churches are just the most recent examples.”

New Light Beulah Baptist Church, founded as The First Church of the Covenanters, was built at 17th and Bainbridge in the late 1800s. The church was originally clad in minty-green serpentine stone. As demolition of the building advances, the original façade can be seen beneath a thick layer of stucco. Beulah Baptist Church is believed to be the childhood church of world-renowned contralto Marian Anderson. Five blocks away, the former Union Baptist Church at 12th and Bainbridge where Anderson first learned to sing was torn down in 2015. 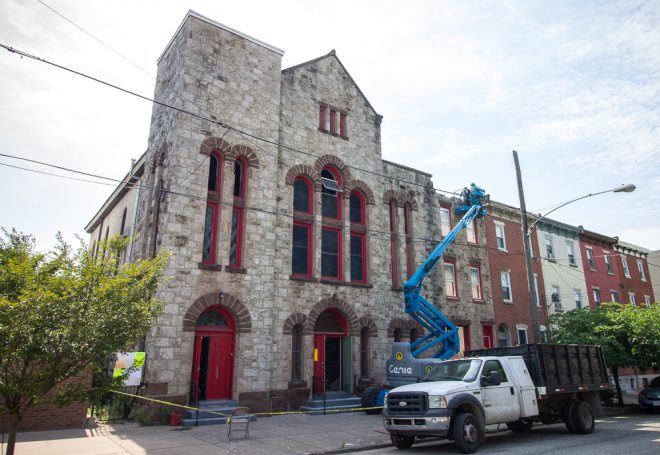 New Macedonia Church on Corinthian Street has been part of the neighborhood fabric since the late 1800s. | Photo: Michael Bixler

New Macedonia Church in Fairmount has been primarily used as a “funeral church” for local African American funeral homes in recent years to offset operating costs incurred by a dwindling congregation. It was founded as the Corinthian Avenue German Church in 1877, organized after the dissolution of the German Reformed St. Stephen’s Church. The Presbyterian congregation renamed the parish the Second German Church in 1879. The building is believed to be the oldest German Presbyterian church in Philadelphia.